Item 4 of 15
This is a contributing entry for North Carolina and the American Revolution: Battles and Skirmishes and only appears as part of that tour.Learn More.

The historical marker for Raft Swamp is located at NC 211 at SR 1505 (Old Lowery Road) southeast of Red Springs in Robeson County. After the battle of Lindley's Mill, Loyalists in the southeastern part of the state joined their forces together. On 15 October 1781, Whig militia led by Griffith Rutherford assaulted the Troy stronghold, destroying the forces in the area.

The historical marker is located on Old Lowery Road 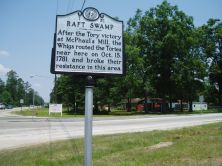 Rutherford had approximately 950 local militia, along with other companies from Guilford, Mecklenburg, and Rowan Counties. A small group of horsemen from Bladen County joined him just before the battle. On 15 October 1781, he sent Major Joseph Graham with mounted militia to find the Tories.

Found the next day, and greatly outnumbered, Graham ordered an assault. The Tories had removed boards from the bridge that crossed the swamp, and thus felt they were safe. Graham's men ignored the bridge and rode directly into the swamp, up a causeway that led to the hill.

Fleeing, so many Tories were cut down that their horses clogged the passage. Graham's men pushed the wounded and deceased into the ditch. Pursued through the swamps for several hours, they received a reprieve when Graham decided they were too scattered and completely beaten, and not worth continuing the pursuit.

The Battle of Little Raft Swamp