Item 16 of 16
This is a contributing entry for Charleston State Capitol Sculptures and only appears as part of that tour.Learn More. 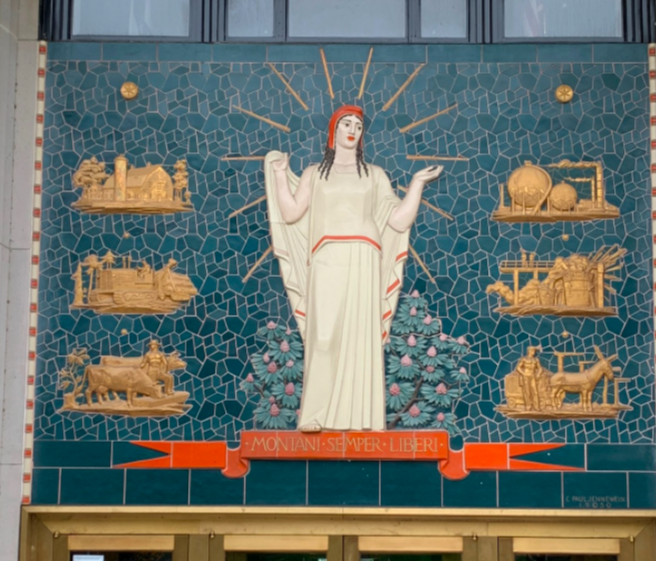 C. Paul Jennewein was a German immigrant to the United States who lived most of his life in New York. Jennewein won the prestigious Prix de Rome and created many adornments for buildings such as the Empire Building at Rockefeller Center, the 1939 World’s Fair building, and the Brooklyn Public Library. Cass Gilbert, architect of the West Virginia Capitol Complex, commissioned Jennewein to create Spirit of West Virginia in the late 1940s. The piece was completed and installed on the Motor Vehicles Building in 1950. Spirit of West Virginia is an emblematic example of the late Art Deco style. That Jennewein was still receiving commissions for his Art Deco works in 1950 — long after Art Deco lost favor to Modernism — is testament to the quality and integrity of his work and style.

Spirit of West Virginia depicts the state of West Virginia personified as a classically styled woman. The figure wears a two-piece white garment with orange trim. Both her hands are upraised, one clutching her cloak and the other empty. Gold rays suggesting divinity radiate from the figure’s head and a rhododendron bush sprouts from a banner at her feet. The banner is inscribed with West Virginia’s state motto, Montani Semper Liberi, or, “A Mountaineer is Always Free.” The woman is surrounded by symbols of West Virginia’s natural resources and industry. On the left, top to bottom, are farm, timber, and husbandry scenes. On the right, top to bottom, are chemical factory, steel factory, and coal mining scenes. Thanks to the image’s somewhat sheltered location, it has suffered little environmental damage and the colors remain vibrant. The piece is a unique inclusion in the capitol complex and offers visual contrast to the duller colors of the Motor Vehicles Building.