Since the founding of Weston, four different bridges have spanned the West Fork River on Second Street. Before there was any bridge, and also after when an existing one was closed for repairs, the river just a short distance upstream from Second Street was more often than not shallow enough to ford. The first span, an open one washed away by the July 22-23, 1846 flood, was described in the Weston Sentinel’s account of that event as being “new”. In fact, it had been constructed of timbers on stone supports many years earlier (1829-30) at the expense of Lewis County, and by the early 1840s was in a bad state of repair. In 1845, the state (of Virginia), as a part of the Staunton & Parkersburg Turnpike project, provided money to substantially update the structure, apparently leading the paper’s editor, newcomer Benjamin Owen, to think it was new. Within two years, a second bridge, a covered one, was built by William Hamilton, and in 1858 was repaired by Lemuel Chenoweth (West Virginia’s acclaimed master bridge-builder (1811-1887)). It came to weather, but only barely, another terrible flood, that of July 9-10, 1888. Almost three years later in April 1891, to all appearance in a ramshackle, dangerous state (though its foundation turned out to be in fairly good condition), the old covered bridge was razed, and by late June of that year the erection of a third, a then-modern iron bridge, was completed. (It was to be the site of a dreadful and shameful lynching on July 6, 1892.) A single-lane span, it was outmoded by the introduction and proliferation of the automobile in the first two decades of the 20th century. In 1922, the fourth and present concrete bridge took its place. That span initially boasted a new feature — pillar-supported, multiple-unit electric lights, which heralded, beginning two years later in June, the erection of such lights throughout the rest of Weston’s business section, turning it into a much lauded “Great White Way”. On Main Avenue and Second Street, a total of 41 street lamps were installed, each of a thousand watts. Unfortunately, the Depression and the city’s then threadbare budget forced the reduction of their numbers and power to just nine units dimmed to 650 watts each. Poorly maintained, the metal poles supporting the lights gradually rusted away. The power company removed them in October 1940, replacing them with the present wooden poles — to the detriment of the business section’s overall appearance. 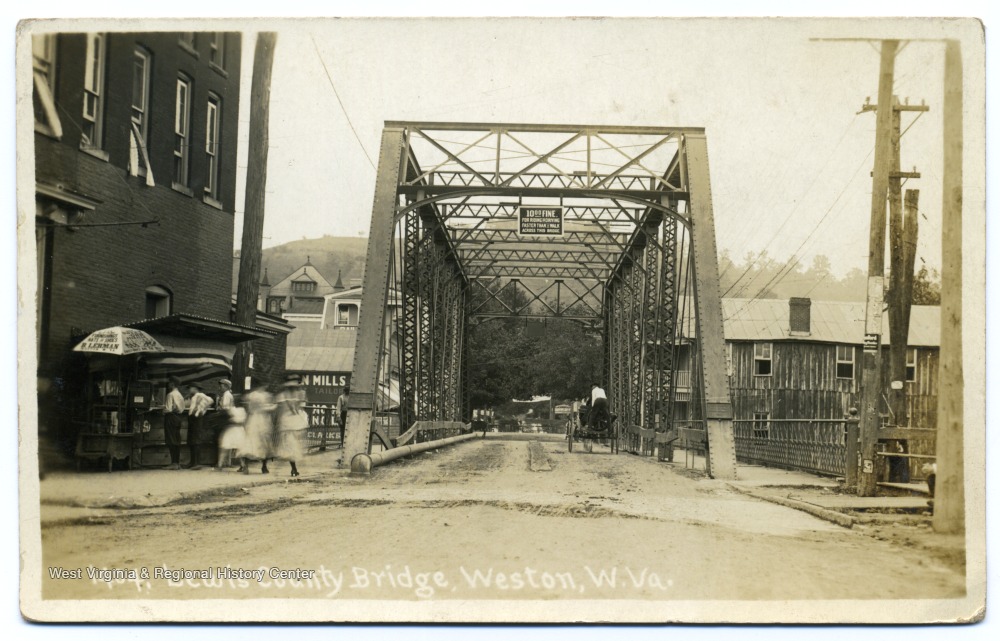 In 1823, when the town was only five years old, the State of Virginia entertained the first proposals to construct a turnpike to link Staunton, east of the Alleghenies, with Parkersburg, on the Ohio River, via Monterey, Beverly, Buckhannon and Weston. It would be another 14 years, however, before construction began in earnest, and not until about 1850 the historic road that ran through the heart of Weston was finished in all respects. Today, U. S. 33 west from Weston to Linn and W. V. 47 on to Parkersburg follow the original route for almost every mile.

The Turnpike promised significant economic development in central West Virginia, and large landowners, particularly the Arnolds, Baileys and Camdens in Lewis County, were encouraged to survey and plot their acreage and offer it for sale, at attractive prices (as little as $2.50 per acre), in European newspapers. The greater response came from Irish families escaping the potato blight then devastating their homeland, and from young German males emigrating to America to escape compulsory military service at home. The end result was increasing population in Court House, Freeman’s Creek and Collins Settlement Magisterial Districts in the years before and after the Civil War. However, it was a hardscrabble existence for the newcomers, the rocky soil that made up their generally hilly properties being of poor fertility. Many who stuck it out, and most had no alternative, eventually profited, and some hugely, when rich deposits of oil and gas were discovered under their lands at the turn of the 19th-20th centuries.

The Turnpike was a partly macadamized, mostly dirt road, poorly maintained, particularly west of Weston. (It would not receive modern paving until the late 1920s, early 1930s.) In the generally wet winter and spring months, it had, as a Parkersburg newspaper put it in January 1899, the “consistency of sorghum molasses, nine feet deep”. In those seasons, people avoided travel by carriage or wagon as much as possible, riding horseback instead.

The Weston & Gauley Bridge Turnpike — the first to directly connect the Monongahela and Kanawha valleys — began at the intersection of Main Avenue and Second Street, ran one block east to Center, then south on Center and crossed Town Run by a small bridge. (At that time the southern portion of Main Avenue ended in a morass.) There it climbed to the lower level of the Old Hill-Arnold cemetery, skirted the graveyard’s north and west fence lines and ran along the hillside until it reached what is now Jackson Street, descending there into Kitsonville and along what became called Pike Street, now South Main Avenue, into Homewood and Bendale. (What is today the road’s riverside pathway through the “narrows” was a 20th century improvement.) It continued on south to Gauley Bridge via Rush Run and Roanoke, then followed the West Fork River to Indian Farm (Arnold), took the ridge on the high hill that begins there to Jacksonville, and, via Abram’s Run, on to Knawl, Bulltown, Sutton and Summersville. Construction of the 18-foot wide, 106-mile long Turnpike — mainly dirt surfaced, here and there stone-based — began in 1849 and was largely completed by 1852, with only its grander bridges yet to be erected across the West Fork River at Weston (Bendale), the Little Kanawha at Bulltown, and the Elk at Sutton.

The Turnpike was essentially replaced with the initiation and construction in the late 1920s-early 1930s of the then-modern, partially brick-, partially concrete-paved U. S. 19 through central West Virginia, which bypassed many sections of the old roadway.

The fact that Weston was the crossroads of both the Staunton & Parkersburg and Weston & Gauley Bridge Turnpikes played an important role in the choosing of the town to be the site of Virginia’s third hospital for the mentally ill.