The several two-story brick business buildings on the west side of Main Avenue, address numbers (most recently or currently) 139 through 155, were all constructed in the period 1896-97, their predecessors having been destroyed in the terrible March 29, 1896 fire. But before and after, stretching for many years from the 19th into the 20th centuries, the site at 143 Main (where today’s Roshell’s Antiques store resides) comprised, in turn, the A. A. Lewis store (a dry goods emporium) and The HUB Department Store. 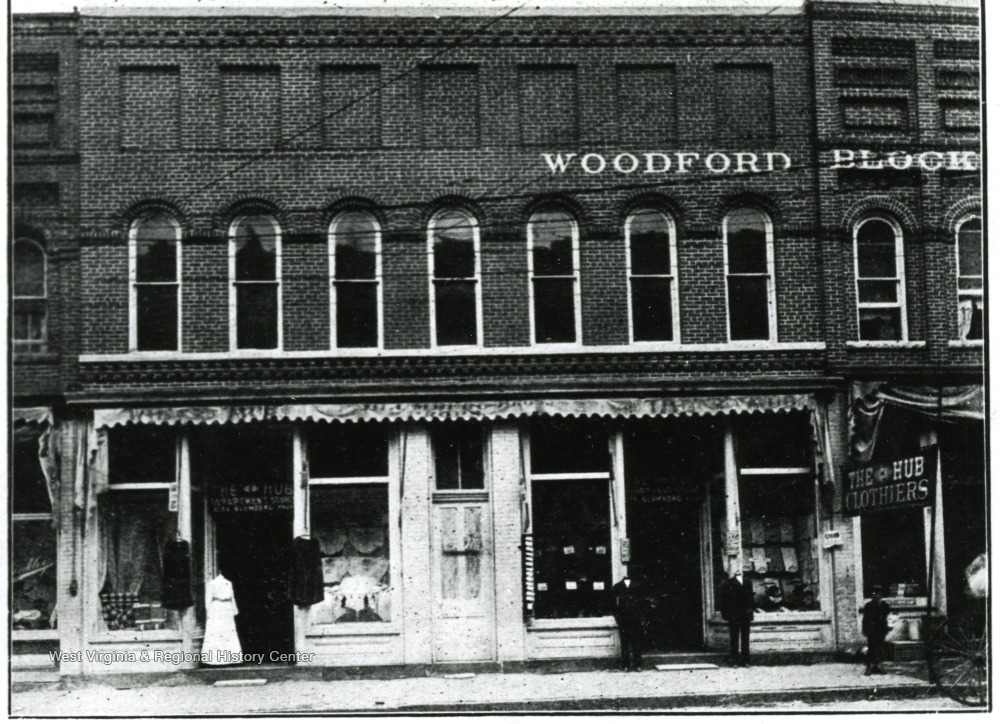 Lewis’s store occupied this site from at least 1870 (though he began his business in Weston as far back as the mid-1840s). He also came to own the site, purchasing it in 1877. And following the 1896 fire, he erected and then occupied the currently standing building. (It should be noted, however, that in contrast to its single entrance and first floor design today, the building was originally constructed as two storerooms, each with its own doorway, such that the building’s formal physical address was 143-145 Main.) His store carried a broad assortment of goods — for example, ladies’ and men’s clothing, hats, shoes, boots, stoneware, cotton yarns, muslin, machine thread, iron nails, and many other items, and also an assortment of basic groceries, like sugar, salt, coffee, and syrup. Lewis died in 1902. He left no will, so for that reason and due to certain outstanding claims that had to be satisfied, first his store’s goods and later his building and property were auctioned off by court decree.

In the meantime, a few other businesses came to occupy the building (among them D. M. Timberlake & Co., a men’s clothing store). Then, in July 1904, a fairly new department store, The HUB — operated originally by brothers Michael and Alexander Blumberg, then by just the latter, and later on by another brother, Henry, all natives of Baltimore — moved in. (The HUB had first opened for business in Weston in May 1902, located at a site near the Second Street bridge, and in 1903 relocated to Main Avenue near the Citizens Bank, which was then on the southeast corner of Main and Bank Alley.)

In November 1904, legal title to Lewis’s building and site finally passed to the well-known farmer and cattleman, Colonel Asa W. Woodford. He also purchased part of the adjoining lot to the north (then 147 Main, but today designated 145 Main, specifically that portion that now constitutes part of Roshell’s Antiques store). In 1905, Woodford renovated the total of these sites, in particular making additions to the rear of the buildings, and formally named his holdings the Woodford Block. In late 1906, the HUB Store expanded (into then 147 Main) to occupy the total property.

Like the Lewis emporium before it, the HUB Store continued a mostly successful business at this general site for decades, closing in 1964.