Where is now open space and an extended parking area on the east side of Main Avenue (152-158 Main) was the Edmiston Block, a three-story, red brick business building erected in 1893 by brothers Matthew and Theodoric Edmiston. Its upper two floors were occupied at different times by offices, clubs and apartments. Ground floor space provided for three separate storerooms over the years.

Main St with view of 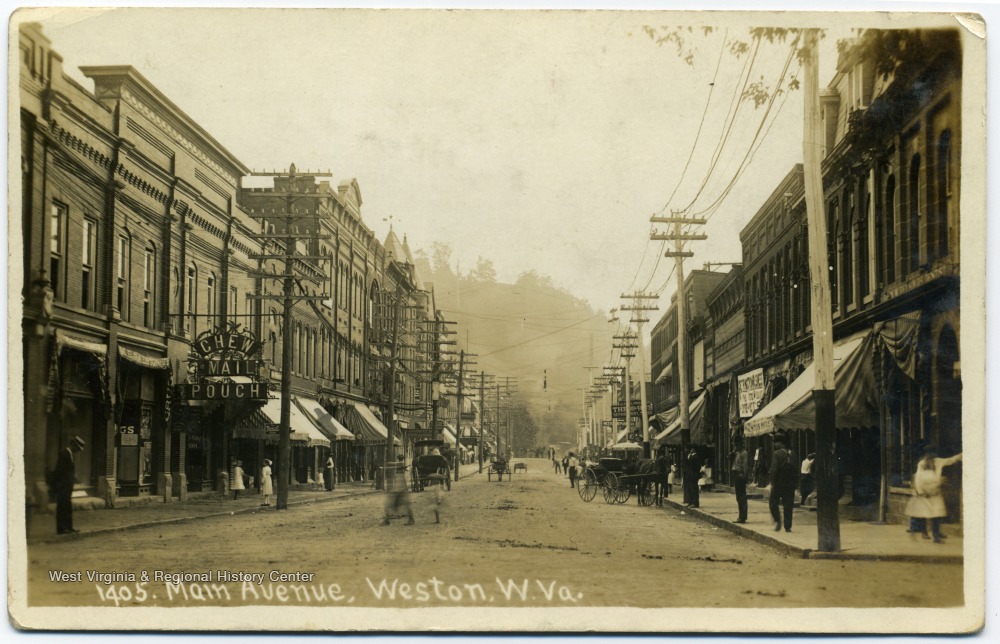 The longest lived and perhaps best loved tenant at 158 Main was Talbott’s — and later Hardman’s — Pharmacy, whose soda fountain and lunch counter were popular attractions for decades. Talbott’s first occupied the space in July 1918, when it moved across the street from its original location at 157 Main. At that time, the owner was Orth Talbott, who previously (starting in 1905) had operated the business with his father, Charles W. Talbott.

In 1926, however, financial problems overcame the pharmacy and it was placed in receivership; its assets were sold in early 1927 to a group of investors (that included Andrew Edmiston, Jr. and Gene Edwards) who formed a corporation, the “Weston Drug Company”, to occupy 158 Main and continue the business. Meanwhile, Orth Talbott became a pharmacist with the Hile Drug Company, located in the Camden Hotel building. But a year later the Hile store failed; its assets were purchased and a newly formed company, the Lewis County Pharmacy, entered the trade at the same location. Orth continued there as one of the pharmacists.

With the advent of the Depression, the Weston Drug Company soon found its venture tough going too, and in 1931, it sold out to a partnership formed by a local resident, Joseph F. Hager, and a Buckhannon druggist, Oke S. Talbott. Initially, the business was called the Hager-Talbott Drug Store, but by 1933 Hager had left the partnership and it was again known simply as Talbott’s.

In 1940, Oke sold the pharmacy to Mark Richardson (and others), who carried on at the same site, though under the new corporate and business name “Weston Drug Store”. But in 1943, apparently in some financial difficulties, Richardson conveyed the business back to Orth Talbott. Rejoined with its original owner and renamed “Talbott’s Store”, it essentially enjoyed yet another revival.

In September 1949, Charles Hardman (who was Orth’s grandnephew) and his mother, Viola, took control of the business, and changed the name to Hardman’s. Over 30 years later, in the mid-1980s, he decided to retire and sold the store to Gerald Wood and Nick Linger. Still named Hardman’s Pharmacy, it continued for several more years, with Tom Law becoming a part-owner. But in June 1992, Rite Aid purchased the drug store, and its longtime life and location on Main Avenue ended. (Regrettably, the famed soda fountain had been discontinued back in the early 1970s.)

On the night of January 6-7, 2000, the Edmiston Block burned in what was the worst fire by far to occur in the downtown business section since 1896. (More than 80 firefighters were called to the scene.) In the end, though successfully prevented from spreading farther, the fire gutted the building’s interior; its outside walls, while left standing, were later razed to avoid a possible collapse. The empty space now serves as a driveway, running to the rear of the respective buildings in between, and related parking spaces.