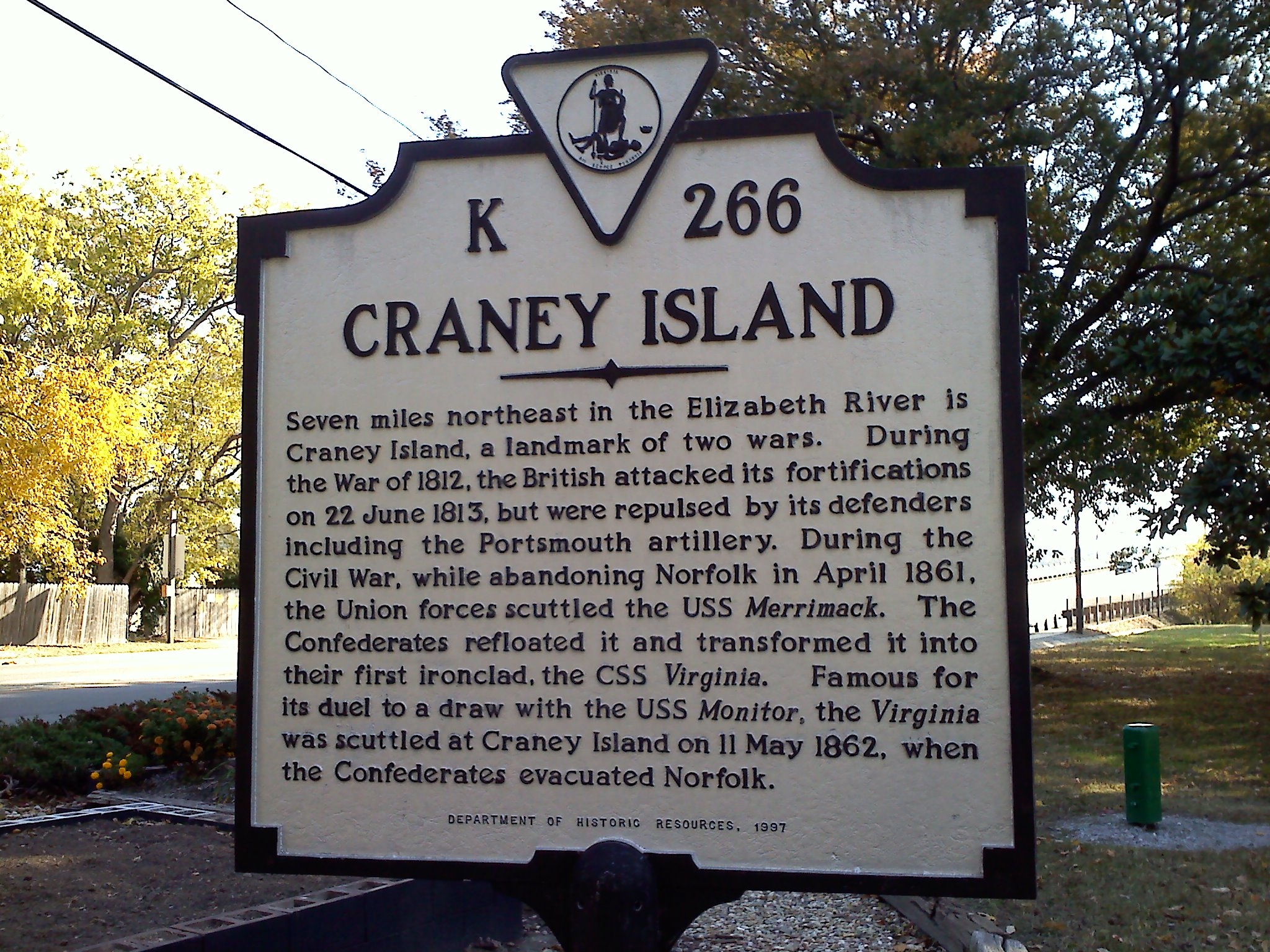 Map of the Battle of Craney Island 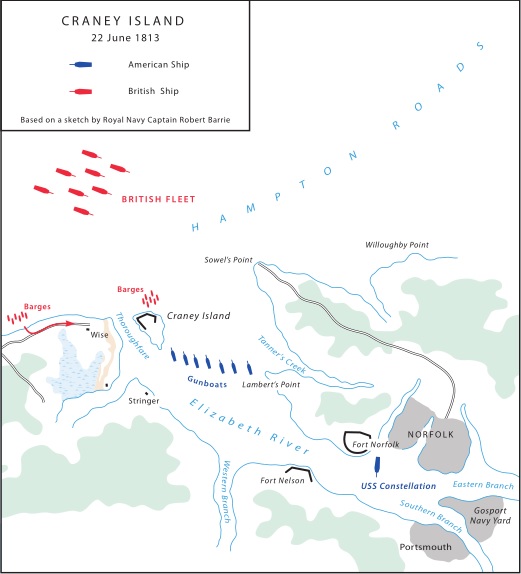 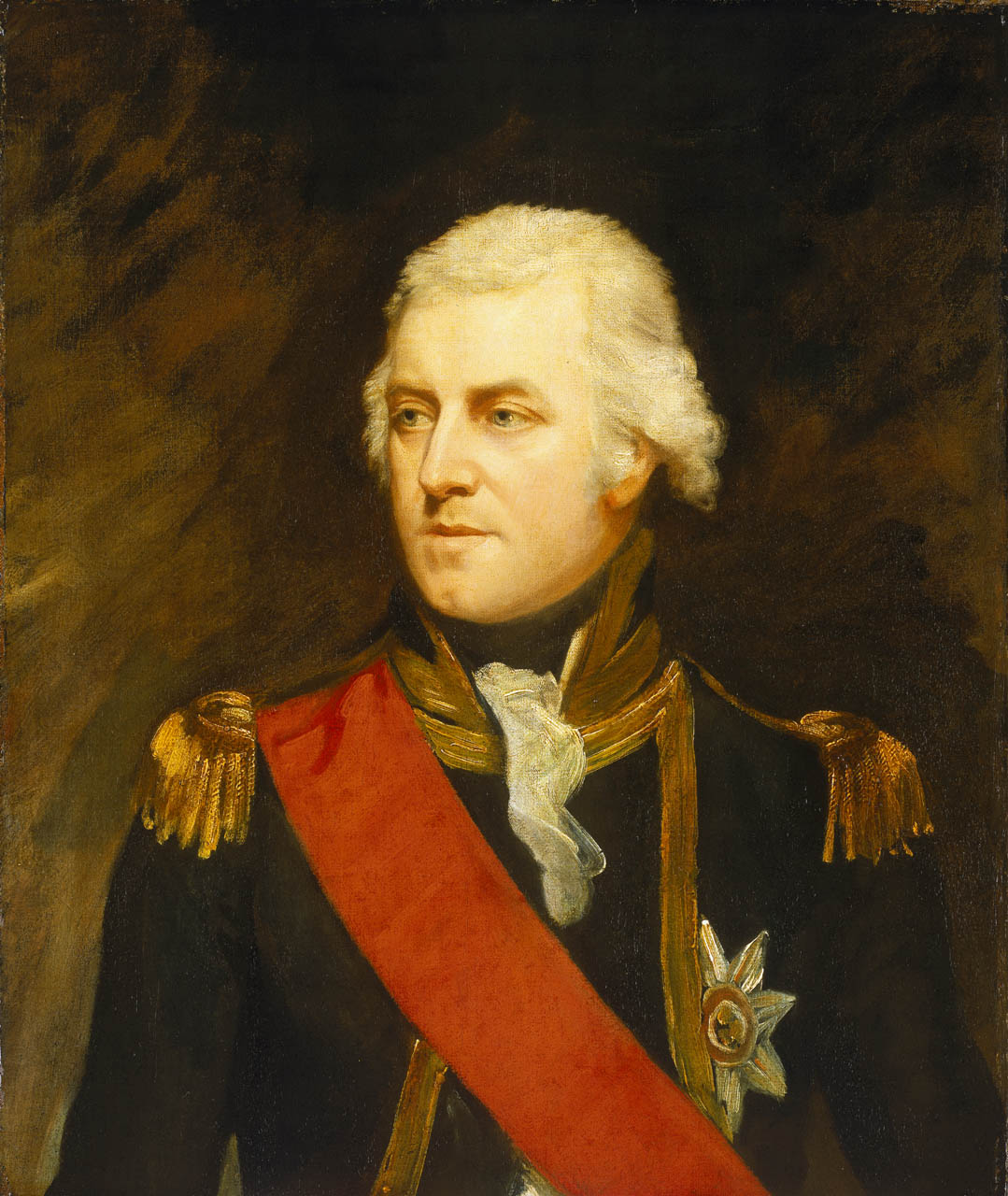 In early 1813, the British Royal Navy blockaded the Chesapeake Bay. The blockade was a strategic one. The War of 1812 had begun a year prior, and American forces had launched repeated invasion of Canada. Although U.S. forces had been stymied thus far, the British had few troops with which to defend the Canadian frontier. The British hoped a blockade of the Chesapeake Bay would divert American soldiers away from the Canadian front, while simultaneously damagin the American economy and undercutting war enthusiasm.

The Chesapeake blockade effectively ended maritime trade out of two of the United States biggest seaports: Baltimore, Maryland and Norfolk, Virginia. Beyond merely blockading these seaports, however, Great Britain considered the possibility of capturing them outright. In particular, Norfolk held a glittering prize: the USS Constellation, a powerful and well-built frigate trapped in the Gosport Navy Yard in Portsmouth. Yet cracking Norfolk would be a tall order. Three fortifications guarded the city: Craney Island, at the mouth of the Elizabeth River, and Forts Nelson and Norfolk upriver closer to the city. Three thousand Virginia militiamen garrisoned these posts. Also bolstering the American defenses were gunboats, placed alongside Craney Island guarding Elizabeth River. Brigadier General Robert B. Taylor commanded the American defenses.

In June 1813, British commander Admiral John Warren determined to attack Norfolk. Having been recently reinforced by the 102nd Regiment of Foot (infantry), along with his own sailors and marine, Warren commanded 2,400 veteran soldiers, not to mention the powerful Royal Navy at his disposal. Warren determined to target Craney Island first. His plan called for a two-pronged attack. Although Craney Island was well-fortified on its ocean-front side, the landward rear of the island was more vulnerable. Warren devised a flank attack; Colonel Thomas Beckwith would land 1,500 men on the mainland just west of Craney Island, near a farm owned by the Wise family. They would then move southeast, crossing Wise Creek and then fording the Elizabeth River to attack Craney Island from the rear. As Beckwith flanked the enemy, a second British force would conduct a frontal assault.

In the early morning hours of June 22, 1813, 1,500 Colonel Beckwith’s regulars and marines loaded into their barges from the British fleet offshore and headed for the coast. There were over 700 American militia on Craney Island, along with artillery guns hauled over by the Constellation's crew; they were on alert. As the British regulars landed on the mainland to their west, the Americans quickly spotted them moving through the woods. They formed into line of battle on the island’s westward shore, and American artillery opened fire on the British.

The British plans quickly went awry. Under fire from American artillery, the British discovered that Wise Creek wasn’t fordable, neither was the Elizabeth River. The British were stuck. Col. Beckwith managed to return the enemy’s fire with a battery of Congreve rockets; although not particularly accurate, the rockets made a loud shriek while in the air and often undermined enemy morale. The rockets couldn’t overpower the American guns, however, and the militia’s artillery fire took its toll as the British milled about ineffectually on the mainland.

While the flank attack stalled, the frontal assault went ahead around 11:00 a.m. The British here fared even worse than Col. Beckwith’s men. As they approached Craney Island, the British came under intense artillery fire. Many of the barges got stuck on shallow mudflats three hundred yards in front of the island. Soldiers who bailed from the sitting barges found themselves mired in mud. Unable to advance and literally stuck in the mud, those barges that were still afloat collected survivors and sailed back towards the fleet. With the frontal assault’s failure, Admiral Warren ordered Col. Beckwith’s force to retreat as well.

The Battle of Craney Island proved a serious defeat for the British forces in the Chesapeake Bay. They suffered sixteen killed and sixty-two wounded or missing. The American forces, ensconced behind their fortifications with stout artillery support, suffered no casualties at all. The successful defense of the island guaranteed the safety of Norfolk and the USS Constellation.

Today, a historical marker acknowledges the importance of the Battle of Craney Island to local history.