Welcome to Fort Kearny State Historical Park. You are visiting the site of a famous fort of the American West. In the twenty-three years of its existence, Fort Kearny became the symbol of westward expansion and development. Fort Kearny was the first fort built to protect travelers on the Oregon Trail. It was the headquarters of military and civil government, an important stage station, a home station for the Pony Express, an outfitting depot for numerous Indian campaigns, and the home of the Pawnee Scouts. Its last important function was providing protection for crews building the Union Pacific Railroad.

The Fort Kearny State Historical Park Visitor Center was constructed in 1968. This brick building house exhibits on the history of the fort, its uses over the years, and those who lived there. Many artifacts on display were discovered on the fort's grounds during archeological digs or were donated by local residents. Visitors may view an 18-minute video about the fort and its history or an 18-minute video on spring migration and sandhill cranes. In March and the first part of April, during the sandhill crane and spring migration, the Interpretive Center doubles as an information center for bird and wildlife viewers.

Reconstructed in 1964, the blacksmith and carpenter shop at Fort Kearny served a vital role for the soldiers as well as the Overland Trails travelers. The blacksmith produced and repaired all manner of metal implements used by the soldiers and travelers, worked on the wagons and shod the horses and mules. Likewise, the carpenter was responsible for lumber in use here as well as the construction and repair of the fort itself. The carpenter was often called on to build the soldiers’ footlockers, which the soldier had to obtain for himself. The blacksmith/carpenter shop was available to all travelers on a first-come, first-serve basis to repair their wagons and make shoes for their animals.

Contrary to the usual image of a fort, stockades were rare, especially in the Great Plains, where wood was hard to obtain. Without a stockade, a fort could be entered at any point; access was not controlled. Like most military posts on the Plains, Fort Kearny was a collection of buildings arranged around an open square or parade ground. Initial plans did call for a surrounding stockade fortification with blockhouses on each corner, but this defensive "fence" was never constructed. The entrance to the stockade is located on the west side of the building and displays inside the stockade depict the various units stationed at the fort. Visitors can climb to the top of the four corners for a panoramic view of the fort.

The adobe storehouse was the first structure built at Fort Kearny and it was one of the most important original buildings. Construction began in June of 1848 under the direction of Lieutenant Daniel P. Woodbury, of the Corps of Engineers, and it was completed by December of that year. This building was located at the southeast corner of the parade ground and served as both commissary and quartermaster storehouse. It fell into serious disrepair and was replaced by new warehouse structures in 1859. Subsequent plans of the fort show the barracks on the former site of the adobe storehouse. 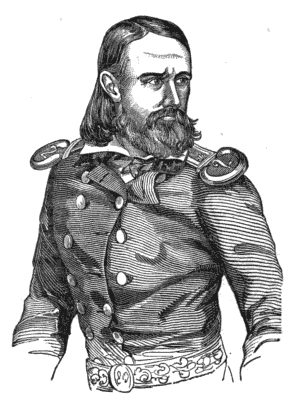 The soldier's quarters was the heart of the fort. Most of the enlisted men stationed at the post lived in these structures. When filled with a full company of soldiers, the quarters would seem crowded with a decided lack of privacy. This building was built in the summer of 1860, after the original building, the adobe storehouse was removed.

Quarters at frontier posts such as Fort Kearny, were never lush, especially in the beginning. The individuality of the forts was particularly evident in the building materials employed. The army authorized permanent forts to be built of stone or brick. Temporary forts–which was the designation of most forts in the Great Plains (like Fort Kearny), despite their decades-long utilization–could employ stone only if it were cheaper than alternatives. Troops built wood-framed buildings with board-and-batten or clapboarded walls.

The two story officer's quarters were built in 1860. While housing on frontier posts was not what we would consider luxury, army regulations complicated matters. The regulations stated that when an officer reported for duty at any post, he could select the quarters of any officer junior to himself for his residence. This could lead to a game of musical chairs. Military protocol at the time also dictated a distinct separation between officers and enlisted men, with the enlisted men not even permitted to speak to an officer without permission. The special status of the officers accounts for the relative luxury of the time of these quarters. They were the sites of many social gatherings, and it was there that visiting officers and dignitaries stayed while visiting.

The fort hospital administered to the needs of the soldiers and their families and served in part for the benefit of the emigrants. Scurvy was prevalent in the garrison and deadly cholera came westward with the emigrants. Three years after the fort was abandoned, 198 bodies of soldiers were removed from the Fort Kearny cemetery, located about one-half mile south of the fort, and reinterred in Fort McPherson National Cemetery. A county road along the western park boundary has destroyed the site of the original hospital. The second built hospital was located directly west of the original.

Like most military posts on the Plains, Fort Kearny was a collection of buildings arranged facing an open square or parade ground. Fort Kearny's parade ground was 600' x 640'. This area was where the posting of the colors and retreat, roll call, the changing of the guard, exercises, drills, and recreation, such as baseball, were conducted. Cottonwood trees planted by soldiers lined the parade grounds during the fort's existence. The last original cottonwood tree planted by Fort Kearny soldiers fell in 1998, 150 years after the establishment of the fort. New cottonwoods were planted in 1998 by neighbors of Fort Kearny - some who were 2nd or 3rd generation relations to the original homesteaders. Trees taken from the Platte River, just like Lieutenant Daniel P. Woodbury's men did in 1848, and some cuttings from the original cottonwoods were planted. Today the flagstaff, cottonwood trees, two memorial monuments, and a 24 lb mountain howitzer cannon are located on the parade grounds at Fort Kearny. Living history demonstrations and cannon firings are conducted on the parade grounds on the summer holidays.

Adjutant is a military appointment given to an officer who assists the commanding officer with unit administration, mostly the management of human resources in an army unit. The term adjutant is used in French-speaking armed forces as a non-commissioned officer rank similar to a staff sergeant or warrant officer but is not equivalent to the role or appointment of an adjutant. The adjutant's building at Fort Kearny also served as an armory, saddlers shop, carpenters shop, and lumber storage.

The Quartermaster Department was responsible for almost everything to keep the post operating except for food and ammunition. This included not only the transportation and storage of all army supplies needed by the post but also the construction and repair of all military buildings. The new quartermaster warehouse erected in 1859 was placed some distance to the north of the parade ground and can be seen on several maps of Fort Kearny. It was a frame building with weatherboarded sides. It was spacious and noted in good condition on the 1864 post-inspection report.

Perhaps the most important role for any frontier fort was its use for amassing and securing the supplies that kept the Army functioning, including food, ammunition, and clothing. The army's ability to supply itself made possible its permanent presence on the plains. Supplies for the post in 1869, were furnished from the assistant commissary of sustenance at Omaha, Nebraska. The Commissary Department was in charge of all food or subsistence supplies at a military post. At each post, the storehouses used by the Assistant Commissaries of Subsistence were provided by the Quartermaster Department, and the quality of protection varied from post to post.

A powder magazine is a magazine (building) designed to store the explosive gunpowder in wooden barrels for safety. Gunpowder, until superseded, was a universal explosive used in the military and for civil engineering: both applications required storage magazines. Most magazines were purely functional and tended to be in remote and secure locations. They are the successor to the earlier powder towers and powder houses. The powder magazine at Fort Kearny is an earthen structure, reconstructed in 1976.

As the name implies, the guardhouse is the building that housed the guard detail. The guard detail was chosen from among the men in what was sometimes a fierce competition. While guard duty meant walking sentry duty, it also meant exemption from other fatigue details. Soldiers competing for guard detail were judged on the appearance of their dress uniform and mastery of drill. In addition to housing the guard, the guardhouse also served as a prison. In a report from December 1869, the guardhouse was described as containing two rooms, each twenty by twenty feet, one for the prisoners, and the other for the guard detail. It had a front porch, was well lighted and suitable for the purpose for which it was used. The Commanding Officer determined their length of sentence. The ordinance storeroom held all rifles, ammunition, and related items when they were not being used by troops in the field. 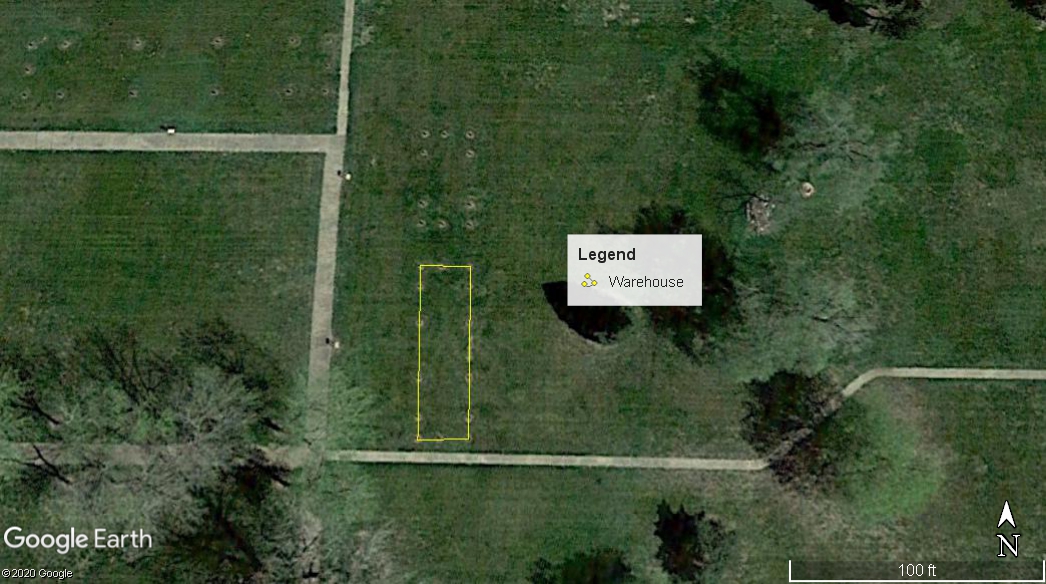 On the south and east sides of the southeast corner of the parade ground, two soldiers' barracks are shown on plans of the post as it appeared in the 1860s. These long rectangular one-story frame buildings were 70 feet long and 24 feet wide. This building was a one-story structure, containing two large squad rooms, one medium-sized and one sergeant's mess room. It was sufficiently sized to house fifty non-commissioned officers but was untenable due to having no floors or windows.

Around the parade ground in 1852 were six buildings. On the east side, in the middle, was a framed two-story soldiers' quarters or barracks for 100 men. The 1864 post-inspection notes the building as - "a two-story building in line with the soldiers quarters, contains three large squad rooms on the first floor, and two squad rooms and seargeants mess rooms on the second floor. The building is amply large for one hundred non-commissioned officers and men. Flooring is almost entirely worn out, and chimneys need repairing. Building is otherwise in good condition, would respectfully recommend new floors and chimneys repaired."

A walking tour of all of the buildings and markers at this historic military post.