The Avon Township Hall (now Paint Creek Center for the Arts) was built in 1880 to serve as Avon Township's seat of government and is one of the few such nineteenth-century public buildings still extant in Oakland County. The two-story, frame building was used as a township hall for 100 years, and was also the site of public meetings, lectures, entertainments and religious services. Originally built as a one-story structure, it was modified during the Great Depression, when the entrances were moved and a second story was raised. In 1980, Avon Township (now the City of Rochester Hills) built a new township hall on West Avon Road, and this building became the home of the Paint Creek Center for the Arts. The building was listed on the Michigan Register of Historic Sites in 1979.

The Rochester Area World War II Honor Roll is a Carrara glass monument containing the names of 1,116 men and women from the Rochester area who served in the armed forces during World War II. It was erected by the Blue Star Mothers in 1945 and was restored under the leadership of the Rochester-Avon Historical Society in 2002. The names on the honor roll demonstrate the level of participation in the wartime military; fully ten percent of the population of Rochester and Avon Township served in uniform during the course of World War II. Twenty-six names on the honor roll are marked with a gold star, signifying that those persons lost their lives in the service of their country.

This granite drinking fountain was donated to the village of Rochester by Samuel Harris (1836-1920), who was a member of the 5th Michigan Volunteer Cavalry during the Civil War. Following the war, Samuel Harris went on to a successful career as a businessman in Chicago, but he did not forget his comrades in Rochester. He returned to his boyhood home for every reunion of the 5th's Company A, and in 1917, he presented the village with a pillared granite fountain, which was given a place of honor at Fourth and Main streets. Increasing traffic and other considerations caused the city fathers to relocate it to Walnut Boulevard and Fourth Street in July 1931, and then in 1951 to Halbach Field. In 1959, the fountain was moved to its fourth location, in front of the American Legion Hall. In 1980 it was removed to the historic acre of Mt. Avon Cemetery. In 2008, through the efforts of the Rochester Historical Commission, the fountain was moved to a permanent place of honor east of the Rochester Municipal Building, near the World War II Honor Roll.

This fully-functional sundial was built to commemorate the bicentennial of the settlement of Rochester by the Graham family in 1817. It was designed by Franklin, Michigan, sculpture artist Russell Thayer, who chose corten steel for the twenty-foot gnomon at the center of the sundial. The gnomon is surrounded by twenty stones, all quarried in Michigan, which stand for the twenty decades of Rochester’s history and bear plaques noting the community’s historical milestones. The sundial was unveiled as part of Rochester's bicentennial observance and homecoming on August 12, 2017. 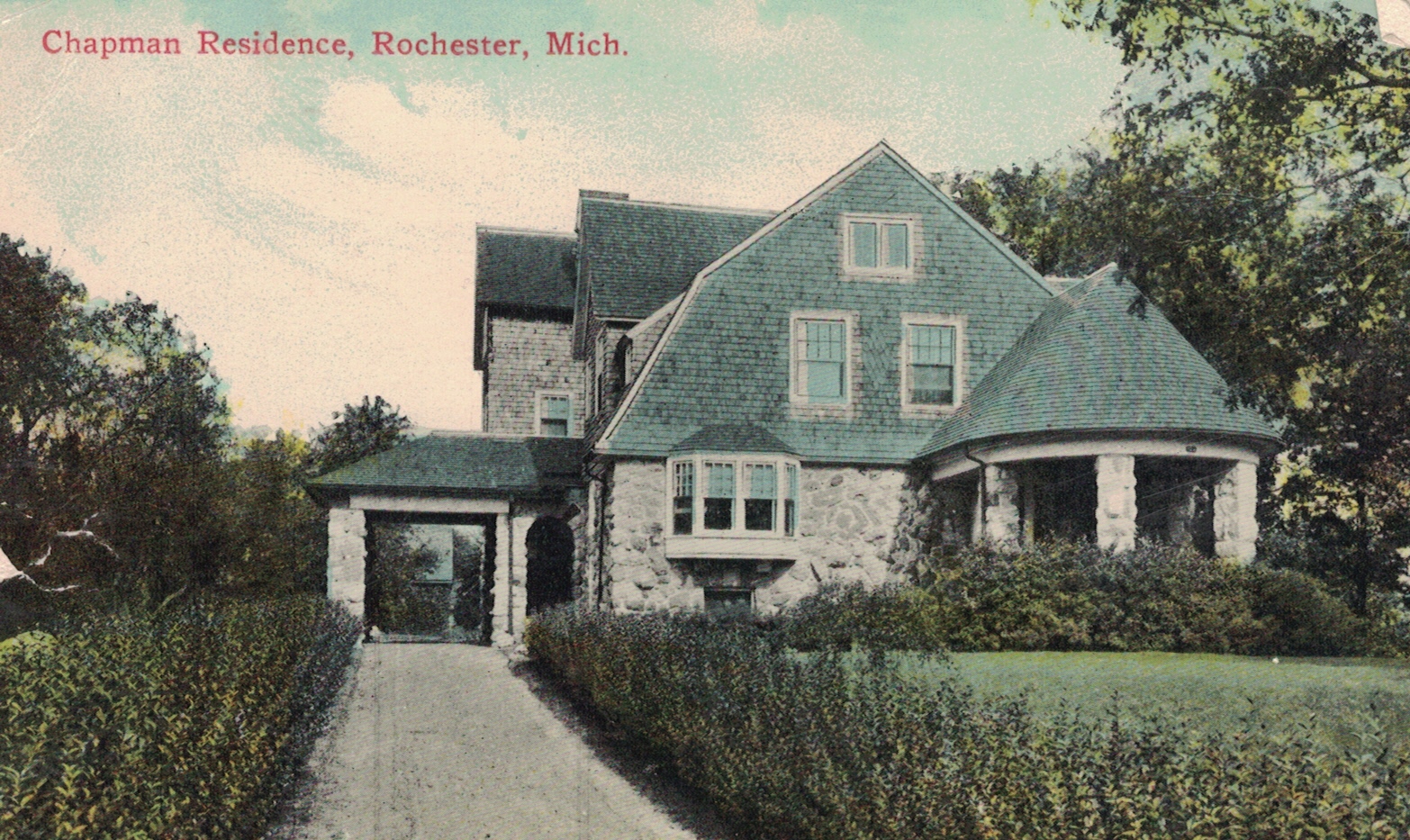 A small historical marker on a single surviving stone fence post near the sidewalk marks the location of the Charles Sherwin Chapman estate, which stood from 1899 until 1968. Charles S. Chapman was the president of Western Knitting Mills in Rochester, and both he and his brother, William Clark Chapman, built impressive residences in the village. Charles Chapman's home, called "Oak Bluff," was one of the few residential designs of renowned Detroit architect Albert Kahn. The house was razed in 1968 when the property was sold for development, but one pillar from the stone fence surrounding the estate remained on the northwest corner of the property. An Eagle Scout created a historical marker on the pillar, which explains the property's former use.

The Rochester Masonic Block was designed in 1899 by well-known Pontiac architect Edward R. Prall. It is a two-story, flat-roofed, Romanesque Revival style building of light tan rock-faced sandstone trimmed in limestone and light brick. The flanking side and rear facades are brick with sandstone trim. The second story features segmentally arched and round arch windows accented by cartouches, and is delineated by round, rock-faced sandstone piers. The words "Masonic Temple" and "1899" appear in stenciled stonework at the parapet.

The Rochester Opera House block is a Richardsonian-style business block built in 1890 by local businessman Charles A. Burr. The first floor of the building has housed a pharmacy continuously since the building opened. The second floor of the building housed the Rochester Opera House, a space devoted to theatrical performances, concerts, public meetings, graduation ceremonies, and lectures. The Opera House block is significant as a local example of Richardsonian architecture, and for its connection to Rochester's social and commercial history. The building underwent exterior restoration in 1987-89 and was listed on the Michigan Register of Historic Sites in 1990.

This pioneer-era water well was first discovered during a routine sidewalk repair in 1995 and was uncovered, excavated, and evaluated by a state archaeologist in 2012 during the MDOT road reconstruction project on Rochester's Main Street. The well was preserved and covered with glass to allow it to be viewed as a historical artifact of Rochester's past. An interpretive sign, placed near the well by the City of Rochester, explains the well's story. 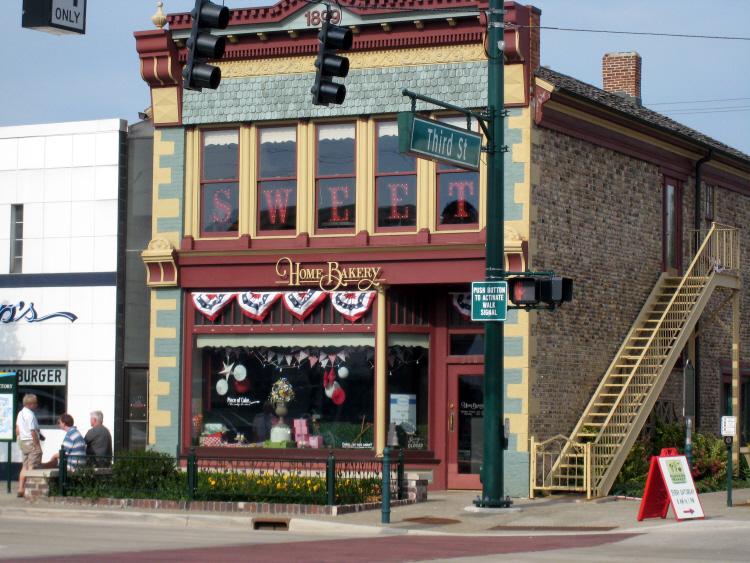 Architectural style: Mid-19th Century: Greek Revival The Rollin Sprague Building/Old Stone Store is a two-story gable-front building with walls of coursed cobblestone construction, which is located on the northeast corner of Main and Third Streets in Rochester's central business district. A number of businesses have occupied the building since its construction around 1849. The building's current facade, its fourth, replicates a Late Victorian pressed metal facade constructed in 1899. Although the structure has undergone a number of changes, it still retains most of its original coursed cobblestone construction and some Greek Revival trim. Historic Use: Commerce/Trade: Business Current Use: Commerce/Trade: Specialty store Owner Type: Private Main Building Foundation: Stone Wall: Stone Period of Significance: 1849-1948 Area of Significance: Commerce and Architecture Arch/Builder: Thomas Anscomb Date Built: 1849

This bronze marker was placed by the Rochester Historical Commission in 1978 on the site of the first settler's house in Oakland County. The house was a log cabin built by Alexander Graham, the son of Rochester's founder, James Graham, in the spring of 1817. In the following year, the first child born to a non-native settler in Oakland County was born in the house when Alexander Graham's wife gave birth to a son named James, after Alexander's father. By 1823, the Alexander Graham house was the meeting place for village children to be taught reading, and therefore served as the village's first school house. 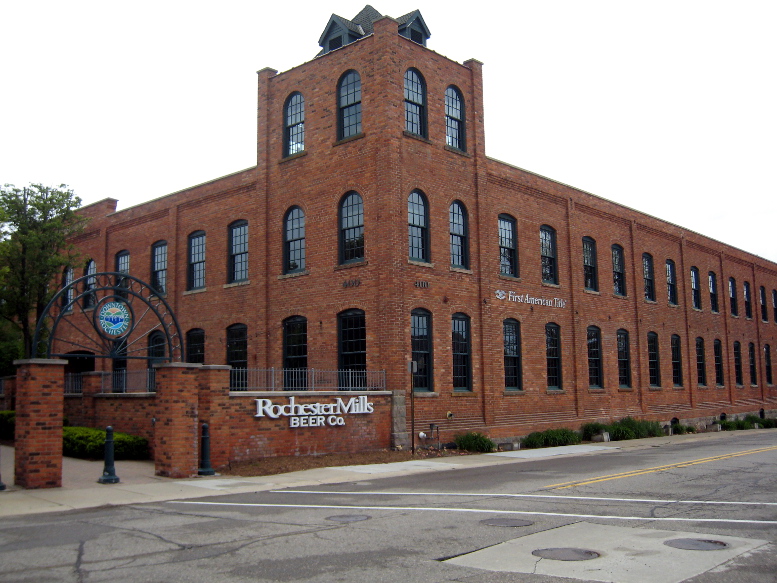 Western Knitting Mills, organized in Detroit by Charles Sherwin Chapman, William Clark Chapman, and William C. Yawkey, built this factory in Rochester in 1896. At one time, the factory was deemed to be the second-largest knitting mill in the country, and it was one of Rochester's largest employers for a generation. After the knitting mill closed, it was purchased by McAleer Manufacturing Company of Detroit, which used the facility during World War II to produce photoflash bombs for the war effort. The building was restored and repurposed in 1997-98 and was listed on the National Register of Historic Places in 2000.