The Rochester Area World War II Honor Roll is a Carrara glass monument containing the names of 1,116 men and women from the Rochester area who served in the armed forces during World War II. It was erected by the Blue Star Mothers in 1945 and was restored under the leadership of the Rochester-Avon Historical Society in 2002. The names on the honor roll demonstrate the level of participation in the wartime military; fully ten percent of the population of Rochester and Avon Township served in uniform during the course of World War II. Twenty-six names on the honor roll are marked with a gold star, signifying that those persons lost their lives in the service of their country. 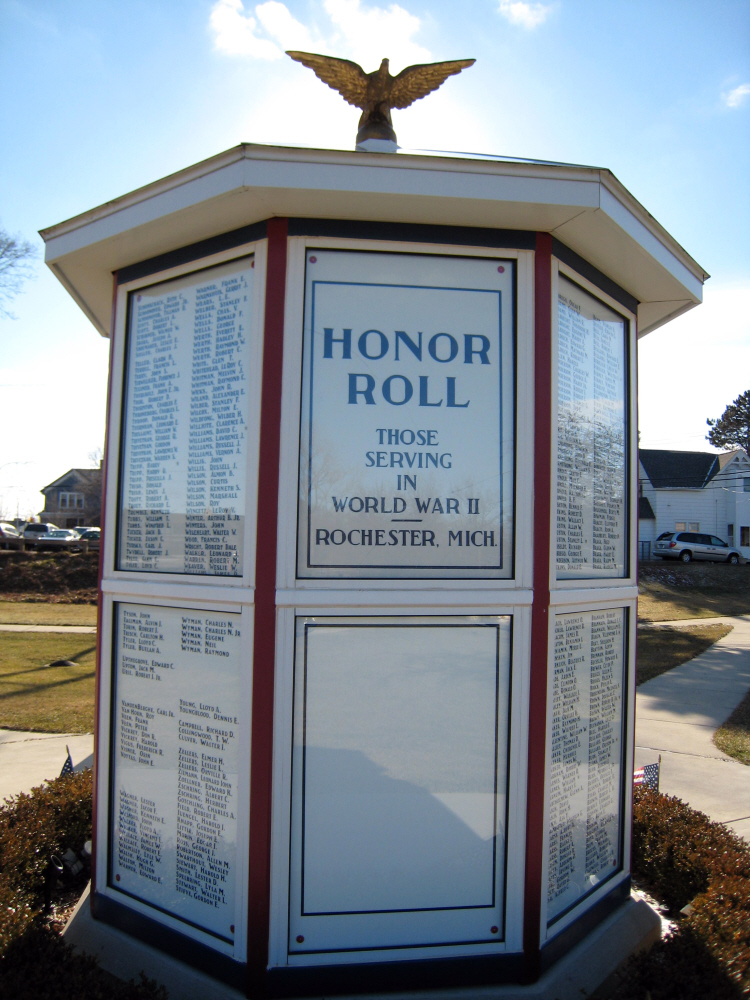 Rochester's World War II Honor Roll, originally sponsored by the Rochester Blue Star Mothers Chapter 14, was dedicated at the intersection of Fifth Street (now University Drive) and Walnut Boulevard in 1945. The honor roll was built by the Pittsburgh Plate Glass Company. The sixteen Carrara glass panels on the monument were inscribed with 1,116 names of local citizens who served in uniform during the war, including twenty-six who gave their lives in the service of their country and the cause of freedom. In danger from wayward automobile traffic, the honor roll was moved in 1951 to Second and Main, where it stood until 1964, when an urban renewal project on the east side of the village dictated its removal. Although the Blue Star Mothers had advocated for repairing the honor roll and moving it the the civic center campus in late 1963, it was instead dismantled in 1964 and placed in storage. The Rochester Clarion reported as follows on September 26, 1963:

It now appears that the memorial to veterans of World War II will find a final home on the grounds somewhere near the Municipal Building, according to indications given by Village Council members Monday night.

Township Treasurer Helen V. Allen, representing the Blue Star Mothers, addressed a letter to the Council asking them to consider a spot for the memorial on the Civic Center grounds.

The memorial is now located on Main St., across the road from the eastern end of Second. Because the names are etched on glass, some of the panels are broken and the memorial in general is in poor condition. It is believed that stones thrown up by passing cars have broken the glass panels.

Despite the intentions of the Blue Star Mothers, the honor roll was dismantled, stored, and largely forgotten for nearly forty years. Decades later, the dismantled pieces were discovered in a garage and moved for safekeeping to the Rochester Hills Museum at Van Hoosen Farm.

In 2001, the Rochester-Avon Historical Society began a campaign to restore the honor roll and place it on public display as the Blue Star Mothers had intended. Marshaling community resources, the society procured the necessary $40,000 in funding, conducted research, located replacement panels of the now-rare Carrara glass, and arranged for an appropriate site to be prepared on the grounds of the Rochester Municipal Building. The honor roll was rededicated on May 25, 2002. An additional twenty-four names, identified during the restoration process, were added to the placards that accompany the monument.