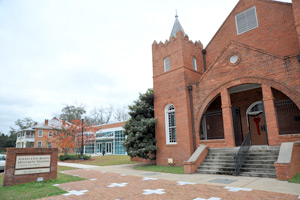 Albany Civil Rights Institute is located in the historic Mt. Zion Baptist Church. Founded in 1906, this church was the place where local citizens founded the Albany Movement--an organization that coordinated local and regional civil rights activism between 1961 and 1963. Today, the Institute preserves and share the history of the Civil Rights Movement in Albany and throughout the nation through interactive exhibits, archives, and sponsored events such as public lectures. 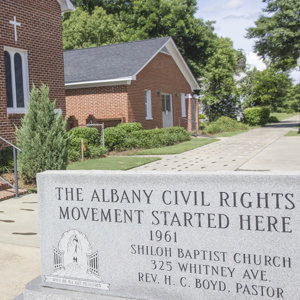 During the 1960s and the Civil Rights Movement, Albany began to have its own set of Civil Rights marches after five Black teenagers were arrested for sitting in a “for whites only” part of a downtown bus station. The following protests and marches resulted in 600 more arrests, eventually prompting national attention and causing Dr. Martin Luther King Jr. to visit Albany. It was here at the Shiloh Baptist Church that mass meetings for the following civil rights marches were organized, and where Dr. King gave speeches to those organizing for the mass demonstrations. The Shiloh Baptist Church actually overflowed with the number of people attending, estimated at over 1,500, with overflow crowds going to Old Mt. Zion Baptist Church across the street. In the end, over the next two years, hundreds of protestors were detained by Chief Laurie Pritchett, prompting Dr. King to feel as though the Marches were a failure as he ran out of protestors willing to risk arrest. However, the local organizers disagreed, with record-breaking African American voter registration being so successful that segregation was removed from the law in Albany the following spring. In 2014 a historical marker was erected in front of the church by the Georgia Historical Society and the Albany Civil Rights Institute to commemorate the historic organizing and gathering that took place here. Today the Shiloh Baptist Church still actively serves the local community. 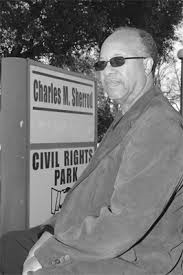 The Charles Sherrod Civil Rights Park, located in Albany, Ga, was created by the city to honor his organizing work in the Albany Movement from 1961-1963 (where more than 2,000 people went to jail) and in the dangerous rural counties from 1963. The man who saw it through until the end was John Lewis. While Lewis, a democrat from Atlanta, Georgia, pursued this task with hard work and dedication. Sherrod is often not credited for his efforts, and has become known as the Unsung Hero of Albany Georgia. 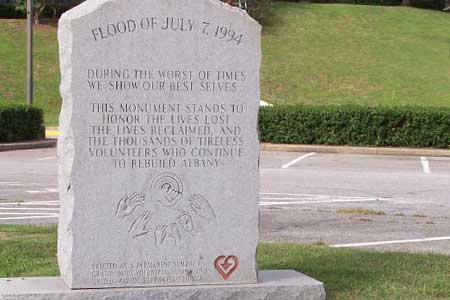 The Great Flood of 1994 destroyed large sections of Albany and other areas of Southwest Georgia. The flood was the result of Tropical Storm Alberto and killed 31 people while making thousands temporarily homeless. Flood waters split Albany in half with waters reaching 43 feet. Officials the portion of Georgia covered by the flood waters was the equivalent in size to Massachusetts and Rhode Island combined. The memorial stands in tribute of those who followed the motto of Albany State and made the city and its university "unsinkable" by rebuilding the city and college.

This memorial plaza was created by the city of Albany in honor of their most famous entertainer and a man who pushed the boundaries music and race and demonstrated what handicapped people could accomplish. The plaza was completed in 2006 and offers a sprawling landscape of musical notes and benches surrounding the statue of Charles and his piano. The monument puts on a show every night, lighting up while speakers play Charles' music. Cast in bronze, the statue was sculpted by Andy Davis and is one of only two statues of Ray Charles. Charles pushed the boundaries of music, African American culture, and public perception of what it meant to be handicapped. The plaza was designed by architectural firm Jordan, Jones and Houlding with the help of students from the Georgia Academy for the Blind. 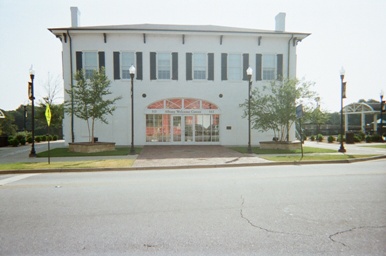 At this location in 1857, Albany city founder Nelson Tift built a toll bridge spanning the Flint River and commissioned Horace King, a prominent African American architect and former slave to build the bridge. In addition to being the largest property owner in the county, Tift was already the owner of an early ferry in Albany before constructing the Flint River Bridge. Initially, Tift petitioned the County Commissioners to build the bridge but was denied on the basis that the bridge location was outside of county limits. Deciding to build the bridge at his own cost, Tift sold some of his people he had enslaved and used the proceeds towards the cost of this bridge which was completed at the cost of $30,000. To recoup his investment, Tift set a toll of 75 cents per four-horse carriage and two cents per head of livestock. The original bridge that Horace King designed was destroyed in a fire several years after construction possibly due to public unrest related to the tolls. A second bridge was destroyed in 1897 when the Flint River Flooded. In response, the county built the current bridge to the south of the bridge house. Over the years following its construction, the bridge house was used as a theatre, ballroom, a Confederate meatpacking operation, and a meeting place for members of the Ku Klux Klan. After 1915 the building served the Keenan business for the P.A. Keenan’s Empire Smithing Company and eventually the Keenan Auto Parts Company after World War II. In 2008, the building was converted into the Albany Welcome Center and eventually into the Albany Convention & Visitors Bureau. As a result, the building which was once used to collect tolls for the bridge demonstrates the long history of the South and the connection between the infrastructure built by enslaved persons and enslavers and the New South of the 20th century.

Formerly home to Rosenberg Brothers Department Store, this building remains an enduring landmark in downtown Albany. Erected in 1924, the structure played a significant role in the city's commercial history in the 20th century as the home of the city's largest and most prestigious department store for many years. It is also important for its Second Renaissance Revival architecture, which is uncommon in the city and southwest Georgia. Perhaps the most notable elements of the building are the large round-arched openings with limestone-cement voussoirs (wedges) and blocks surrounding them. Other features include pilasters (columns) and a cornice surrounding the perimeter of the roof. The building was home to the Albany Herald but the newspaper moved to a new location in 2020. 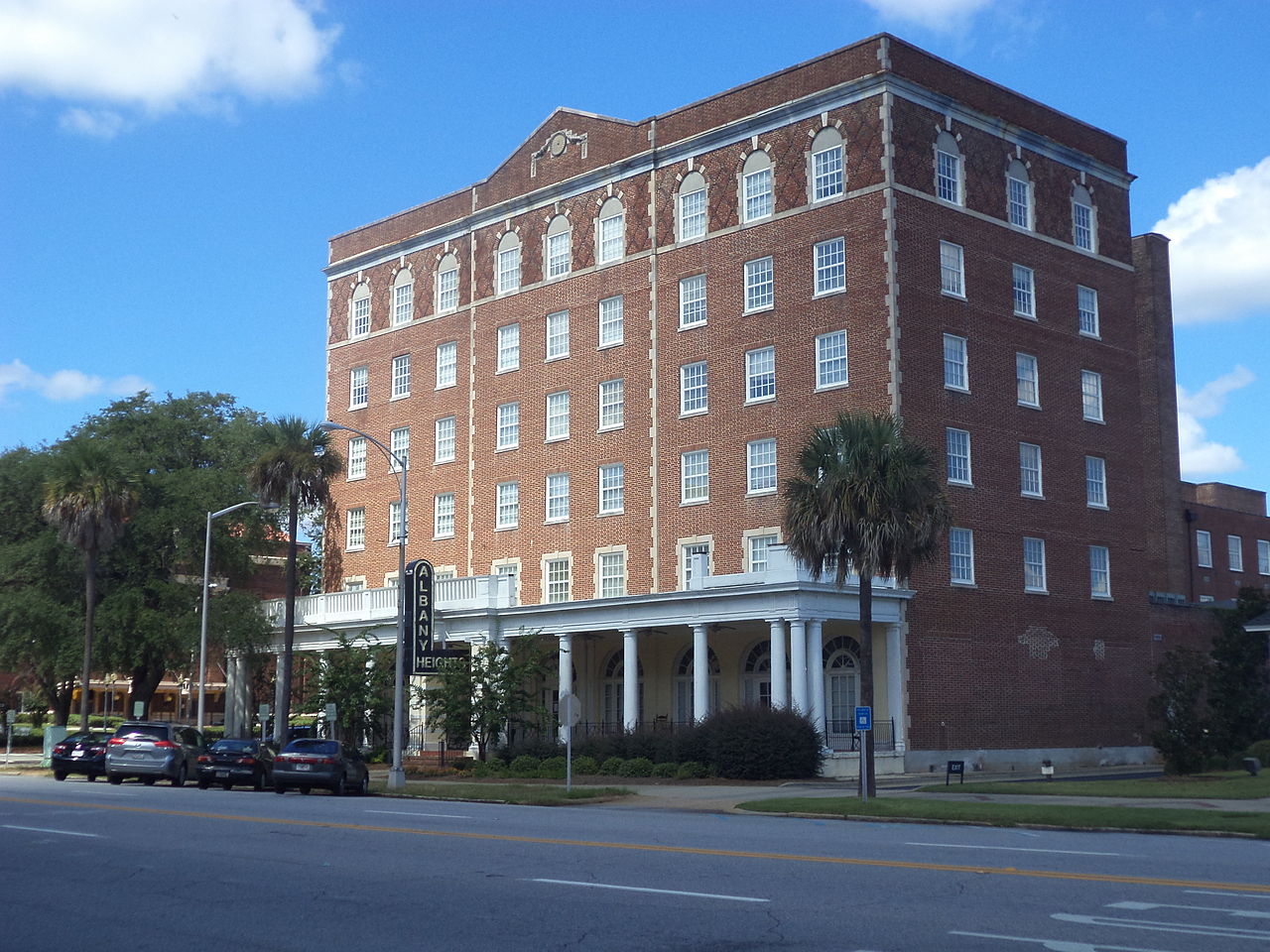 Now an apartment building, this historic building is the former New Albany Hotel. It was erected in 1925 and is notable for its architecture and impact on the city's economy in the 1920s and 1930s. As for design, the building is a fine example of Georgian architecture. Interesting features include decorative Dutch Cross bond brickwork on the sixth floor, a pedimented parapet, quoins (stones blocks at the corners of walls), arched windows with fanlights, and a porch with Doric columns. The building was added to the National Register of Historic Places in 1982. 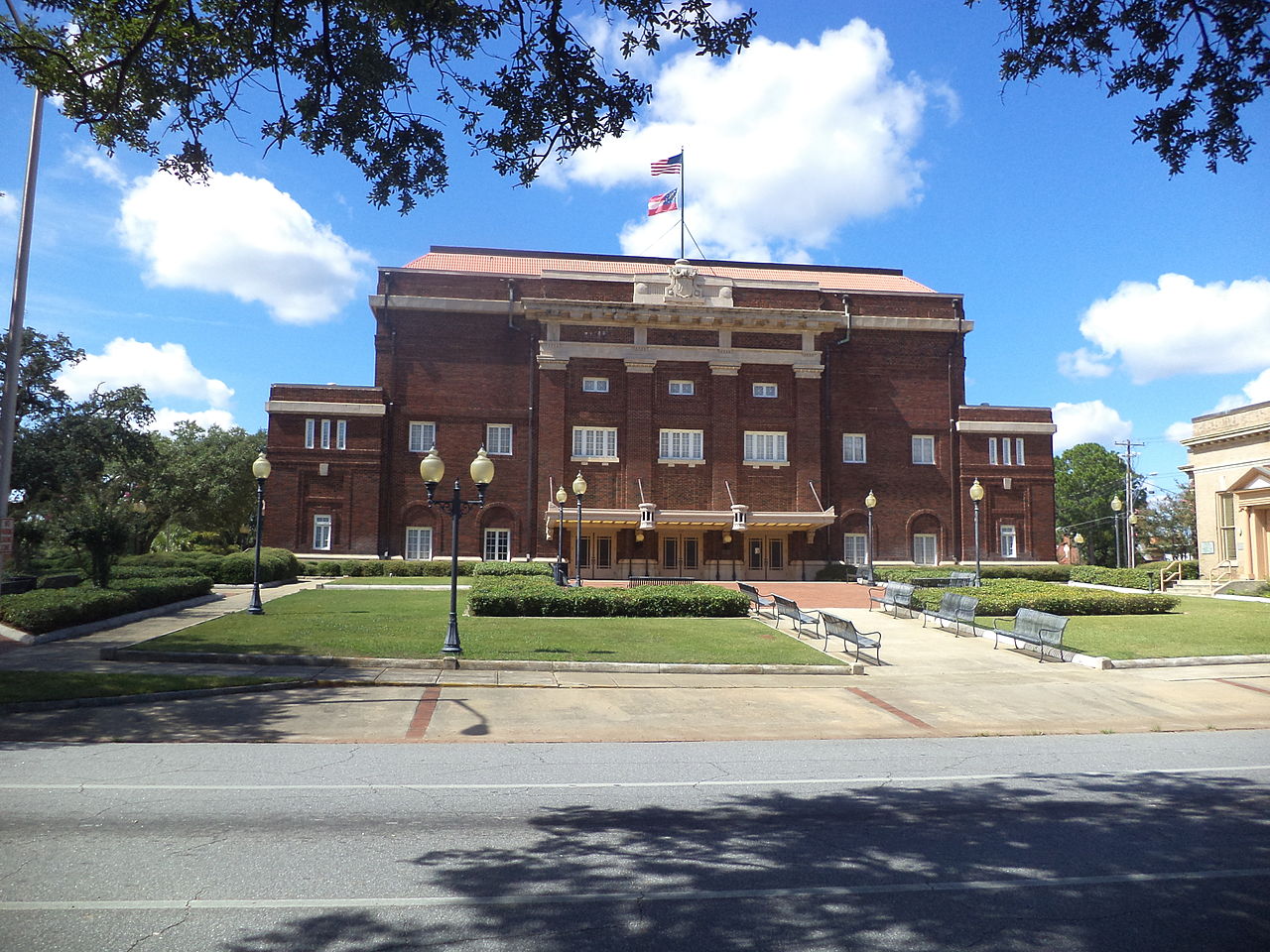 The Albany Municipal Auditorium has been a vital civic and entertainment venue for the city since it was built in 1916. It has also been the home of the Albany Symphony Orchestra since 1990. Designed by architect A. Ten Eyck Brown, the auditorium is a striking building featuring a main entrance with a overhanging marquee, drip-moulded brick bands encircling the building, bands of marble, and a decorative shield at the top center with the letters "M" and "A" superimposed on each other. The auditorium was added to the National Register of Historic Places in 1974.

Hungarian immigrant Samuel Farkas built this beautiful home in 1889. The two-and-a-half story building is an exceptional example of Second Empire architecture and as such is one of the most striking homes in Albany. It features a mansard roof with "fish scale" slate shingles and pedimented dormers, an imposing main entrance with large pillars, arched windows with white keystones, and a one-story parlor on the east side of the house. It is a private home today but is easily viewed from the street.

The United States Post Office and Courthouse building has served Albany residents since its construction in 1912. In terms of design, it is an excellent example of Second Renaissance Revival architecture, which contributes to its important status for the community. The building, which was designed by U.S. Supervising Architect James Knox Taylor, features decorative brickwork that forms a variety of designs across the exterior. These include pilasters (columns) and tall arches that surround first and second-floor windows. Other notable features include a stone cornice that wraps around the perimeter on the third floor and a clay tile roof. The building continues to serve its original purpose. 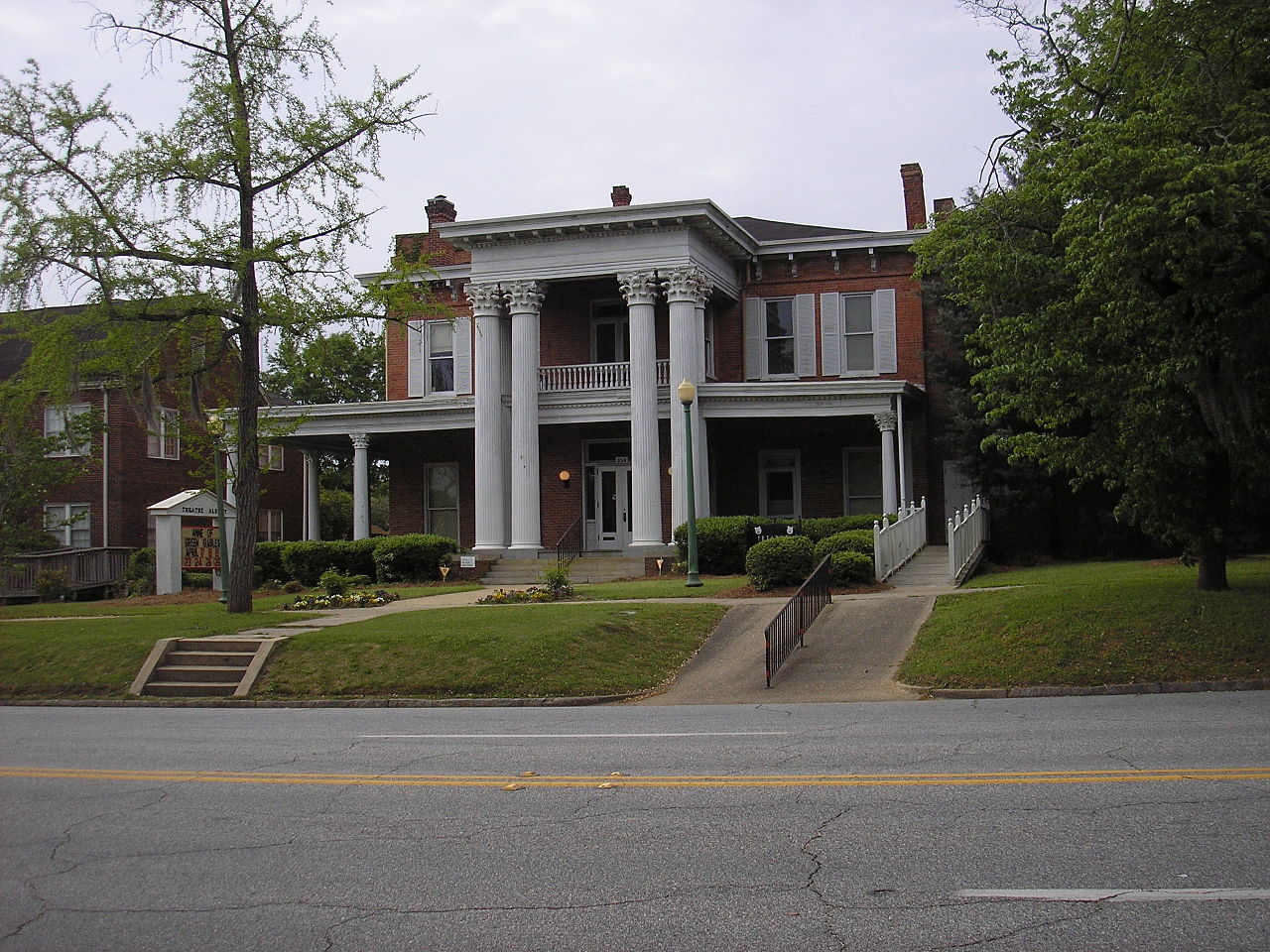 Now the location of Theatre Albany, the John A. Davis House is historically significant for its architecture and association with Davis, who was a prominent local and state figure and owner of the house after the Civil War. Constructed around 1853, the house is an outstanding example of Italianate Villa architecture, which is uncommon in Georgia. Its brick construction is also notable since brick was somewhat rarely used in the antebellum period. The house features a two-story portico with large Corinthian columns supporting a large entablature, and a wrap around porch with smaller Corinthian columns. Attached to the house is the theater (which contains the stage and auditorium) built in the 1960s.