An imposing and dominant building in downtown Mobile, this courthouse stands as a landmark of Modern Classic federal architecture and Neo-Classical Revival of the 1930s. Built between 1933 and 1934 this courthouse originally served as a dual purpose US Customs House and federal courthouse. The Customs Service later vacated the building to expand their operations. Following the departure of the Customs Service the building was renamed to the “John A. Campbell United States courthouse.” John A. Campbell was notable for being an Associate Justice on the Supreme Court from 1853 to 1861, for abandoning that post to serve as the Confederate Assistant Secretary of War, and for being one of three Confederate officials who met with Lincoln in 1865 in an unsuccessful attempt to negotiate an end to the Civil War. After decades of service, this courthouse was entered into the National Register of Historic Places in 2008. 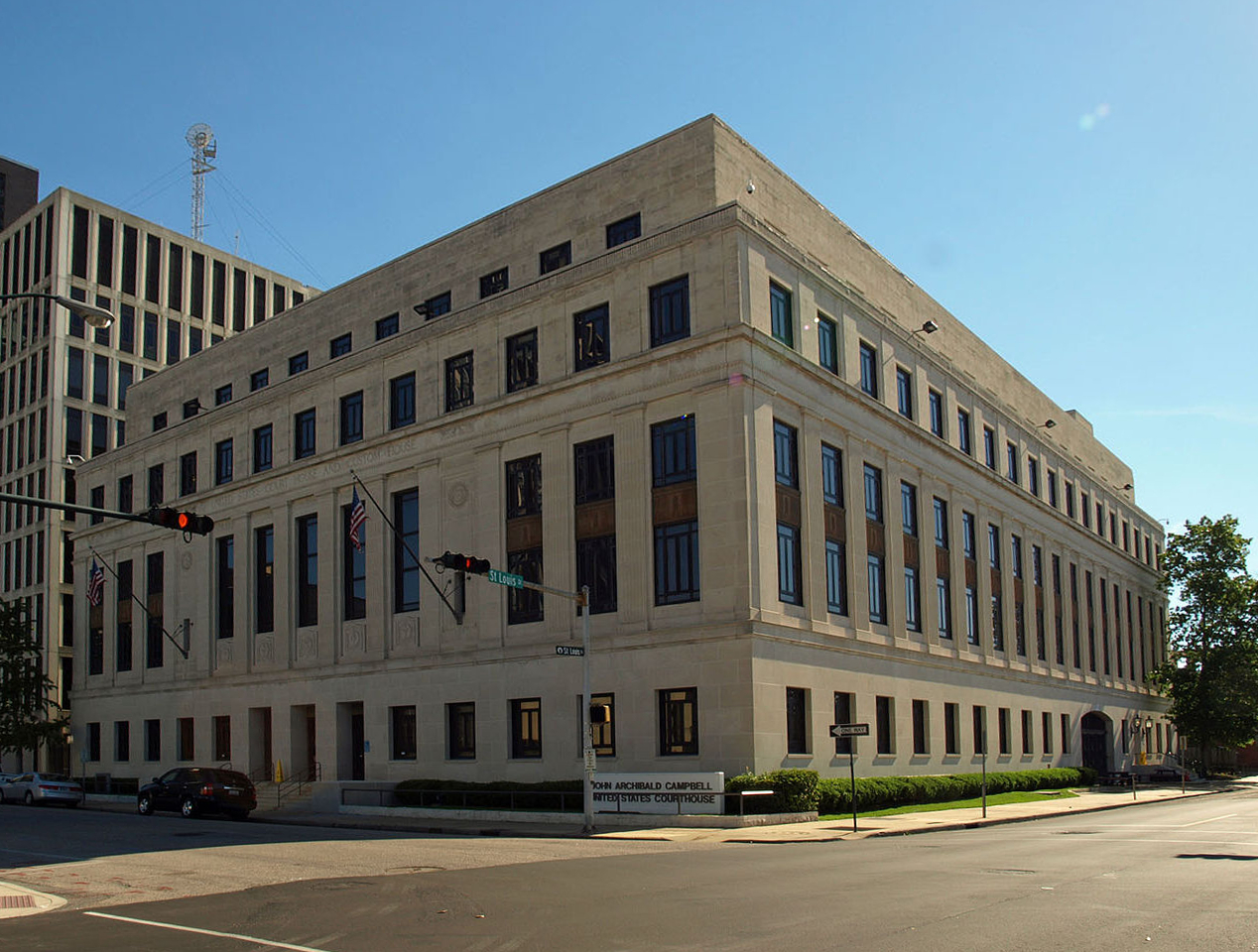 The John A Campbell US Courthouse as it appeared in 2008 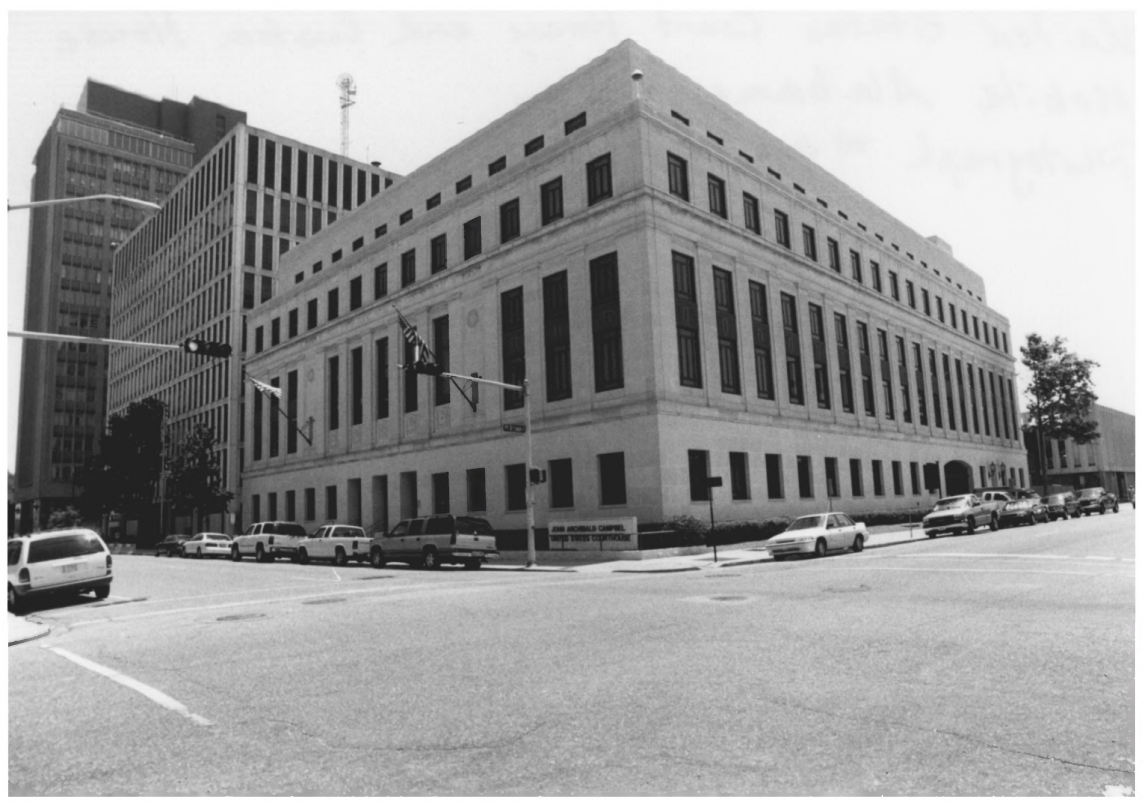 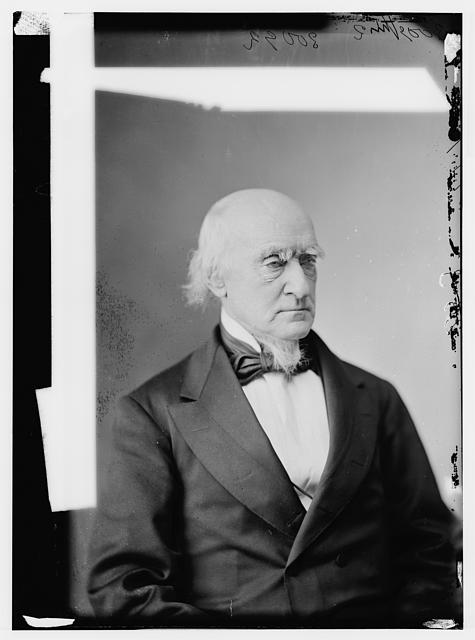 This courthouse stands upon a plot of land acquired by the Federal Government sometime in the early 1930s. Before the courthouse was built the US Postal Service had already stood on the plot for almost 20 years already, having constructed a post office between 1914 and 1916 for Mobile on the site. The courthouse was designed by local architecture firm Carey and Dowling and was eventually constructed between 1933 and 1934.

The building was initially named the United States Courthouse and Custom House owing to its dual purpose, but the Customs Service later vacated the building to expand their operations elsewhere. After the Customs Service departed the building was renamed to the “John A. Campbell United States courthouse” after John A. Campbell, an Associate Justice of the United States Supreme Court between 1853 and 1861. Between 1939 and 1940 an addition was constructed on the west side of the courthouse which added an additional courtroom. Interior renovations occurred in the 1960s and 70s, and the building was eventually added to the National Register of Historic Places on October 8th, 2008.

John A. Campbell’s history as a lawyer and as a member of the military is one that reflects the ideology of the South at the time. Before his tenure as an Associate Justice, Campbell served with the Alabama Militia in 1836 to assist in the removal of the Creeks. Native Americans during this period were still being forced out of actively settled land and the Creeks had been in open conflict with settlers and militia who were violating the treaty that guaranteed land to the Creek Nation. Campbell assisted the militia by negotiating a settlement between the Creeks and militia members, convincing the Creeks to surrender and agree to be relocated despite their previous treaties.

Shortly after, Campbell moved to Mobile with his family and practiced law within the city resolving land disputes. During this period and after, thanks to his lucrative law practice, Campbell owned several slaves and utilized their labor on his family orchard. Throughout this period Campbell was a strong advocate for maintaining slavery and the South's power in Washington. Campbell agreed with most white Southerners that radical northern abolitionists sought the destruction of the South’s economy and society, and he consistently sided with plantation owners and others whose interests were aligned with the expansion of slavery.

Campbell served as an Associate Justice from 1853 to 1861 when he resigned his position and joined the Confederacy. In most cases as a Supreme Court Justice, Campbell upheld state authority unless federal power was clearly authorized by the constitution. Among the notable cases during his tenure is the case of Dred Scott v. Sandford, in which the formerly enslaved Dred Scott brought suit for freedom. The argument against Scott revolved around the premise the slaves and their descendants were not citizens and could not sue in court, and in addition that the federal government could not prohibit slavery in the territories. Campbell voted with the majority to deny Scott’s petition and issued a separate but concurring opinion in which he denied the right of officials in Northern states the authority to act in any manner involving slavery in their own jurisdiction. This legal reasoning denying the right of states to interfere with slavery, even in states that had outlawed slavery, was consistent throughout Campbell's career.

At the start of the Civil War, Campbell was one of the Southern leaders who attempted to broker peace between the states. When he was unsuccessful at preventing armed conflict he resigned from the Supreme Court in May 1861 and swiftly found a position within the Confederate government as the Assistant Secretary of War. After the war, Campbell was imprisoned with other high-ranking Confederate officials in Fort Pulaski, Georgia, from May to October of 1865.

Following the Civil War Campbell returned to New Orleans and served as an attorney for cases brought before the US Supreme Court. Many of these cases revolved around Reconstruction after the Civil War and the 14th and 15th amendments. Campbell continued to argue cases before the Supreme Court until 1886 due to failing health and passed away on March 12, 1889.

In the years after the war, he maintained his political activism on behalf of the Old South and its racial caste system, repeatedly siding with white supremacists who launched coups to reverse the electoral victories of biracial Republican parties in the South following the Civil War. Campbell even met with Ulysses S. Grant and attempted to convince the President to support a white supremacist coup in Louisiana that had forced the legally-elected governor and other officials into hiding. While the President rejected Campbell's appeal, the removal of federal troops from the South prompted a final coup in Louisiana that saw white supremacists succeed in taking control of the state government by force of arms. These events were later memorialized by a monument that praised the Crescent City White League and others for their role in the Battle of Liberty Place. Despite his support of violent white supremacists throughout Reconstruction, Campbell is still best remembered today as the only former Supreme Court justice to return to the Court to try a case as an attorney.