Cathedral-Basilica of the Immaculate Conception

The Cathedral-Basilica of the Immaculate Conception is one of Mobile's most impressive structures. It was designed in the Greek Revival style, featuring a front facade resembling an ancient Greek temple with Doric columnns, and two flanking towers. It took fifteen years to build, from 1835-1850. The interior is also striking. Corinthian columnns support the arched roof and stained glass windows, made in Munich, Germany, are located on the walls on each side of the building. The cathedral has also had an organ since its completion (the original one was destroyed by a fire in 1954). The cathedral is part of the Church Street East Historic District, which is listed on the National Register of Historic Places. Just in front of the building is a historical marker offering a brief history of the cathedral and the archdiocese.

The Cathedral-Basilica of the Immaculate Conception took fifteen years to build between 1835-1850. 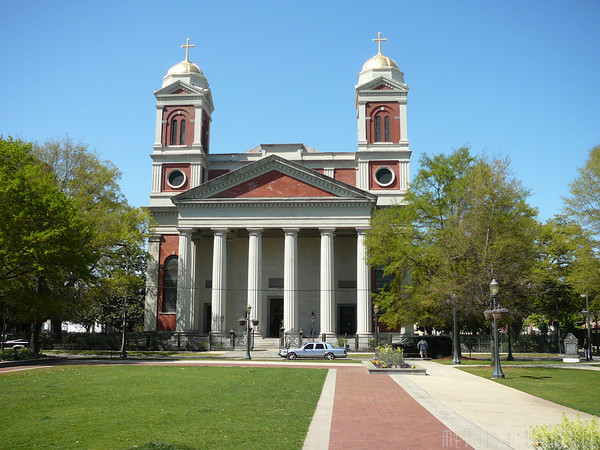 The historical marker is located in front of the cathedral 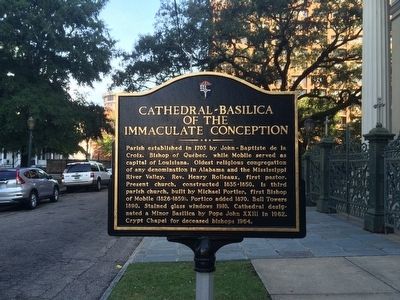 The other side of the marker 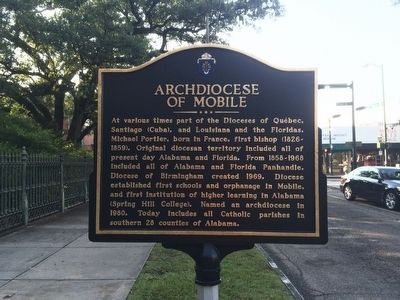 In July 1703, the Bishop of Québec, John-Baptiste del la Croix, founded the parish in what is now referred to as "Old Mobile," the original location of the city in what is now the town of Le Moyne. Mobile moved to the current location in 1711 and the parish took on a new name, Our Lady of Mobile. Later during Spanish occupation the church acquired the name Immaculate Conception. Various improvements, additions, and renovations have taken place over the years. The tower were added in 1890, the portico (the front part of the cathedral with the columnns) was built in 1870, and the stained glass windows in 1910.