On April 7, 1825, Frenchman and American Revolutionary War general, the Marquis de Lafayette (his full name was Marie-Joseph Paul Yves Roch Gilbert du Motier), arrived in Mobile as part of a grand tour of the United States. The year 1825 was the 50th anniversary of the war and the Marquis was invited by President James Monroe to honor his role in the war as well to promote patriotism among Americans—i.e. the "Spirit of 1776". The Marquis attended a banquet and ball, and was also entertained at this location (now the property of the Hilton Hotel), on which stood the home of Mayor Samuel H. Garrow.

The historical marker is on the corner of Jackson and Government Streets, where the mayor's home once stood. 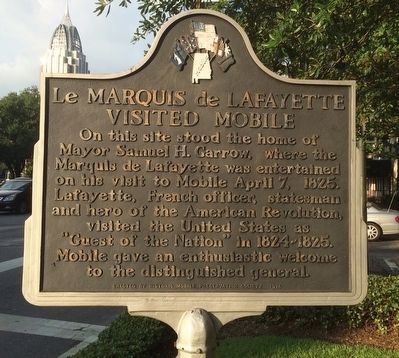 The Marquis was only 20 when he came to America to fight with the Continental Army. His reputation and experience, despite being so young, earned him the position as General Washington's aide. He was also a general, and participated in key battles such as Brandywine and Yorktown. Back in France, he was a member of the Assembly of Notables and commanded the French National Guard. During the French Revolution (1789-1799), he felt that the revolutionaries had gone to far and tried to escape but was caught and thrown into prison in 1797. After the Revolution he again was an active member of government and earned a seat in parliament in 1818 but lost it in 1824. Upon hearing this news, President James Monroe decided to invite the Marquis to take a grand tour of what was then 24 American states. The festivities in Mobile cost the state $17,000 (an enormous sum at the time) but it allowed Alabamans to see and honor one of the countries great heroes. Many people traveled hundreds of miles to Mobile to see him, including some Revolutionary War veterans.