This marker commemorates the first Jewish house of worship in the state, called Shaarai Shomayim, which means "gates of heaven" in English. Jews had been living in Mobile since 1764 but the community did not become large enough to found their own congregation until 1841. They finally built their first house of worship in 1846 at a location on St. Emmanuel Street between Church and Government Streets. They moved to a new spot on Jackson Street between St. Louis and St. Michael Streets in 1853. Unfortunately, a fire destroyed it in 1856 but it was rebuilt, with the help of the local Christian community, in 1858. A new temple was built in 1907. This was replaced by the current one on Springhill Avenue Temple in 1954. The Jewish American Society for Historic Preservation erected the marker in 2006. 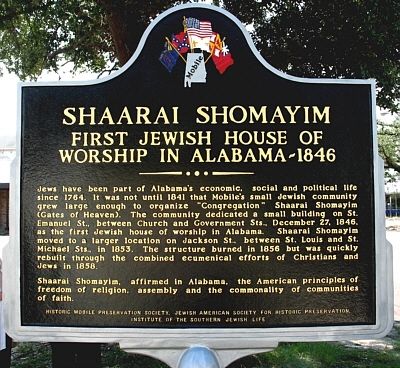 Jewish traders had been living in Mobile in the early 18th century but were forced to leave in 1724 by the French, who enacted laws that year banning Jews from residing in the city (the French founded the city in 1702). When the British gained control in 1763 the ban was lifted but was then put back in place when the Spanish assumed control twenty years later. However, it was not enforced. The effort to establish the congregation began when its founder, Israel I. Jones, arrived from London sometime before 1841.

Bloch, Abraham. One a Day: An Anthology of Jewish Historical Anniversaries for Every Day of the Year. Hoboken, New Jersey: KTAV Publishing House, Inc., 1987.