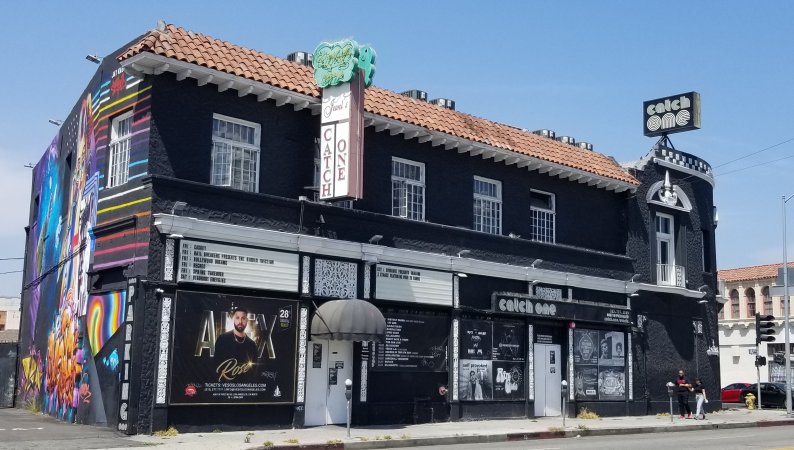 Founded by Jewel Thais-Williams in 1973, Jewel's Catch One is considered to be one of the first and most prominent black-owned LGBTQ+ discotheques in the United States. With three bars, three dance floors, and celebrity clubgoers that included Madonna, Bette Midler, Chaka Khan, and The Weather Girls, Jewel's Catch One was often called the "Studio 54" of Los Angeles. During the height of the AIDS epidemic in the early 1990's, Jewel and her wife, Rue Thais-Williams, also operated a support facility out of the nightclub for women and children with HIV/AIDS in the area called "Rue's House". Jewel's Catch One closed in July of 2015 and the building is currently being used by another nightclub recently renamed Catch One in honor of its historic predecessor.

Containing over 2 million historical items, ONE National Archives is one of the largest repositories of LGBTQ+ historical materials in the world. The archival collection includes a wide variety of photographs, film, books, art, clothing, and other items. Members of the prominent early gay rights activist group the Mattachine Society established ONE Inc. in 1952, making it the oldest LGBTQ organization still in existence today. In 1994, ONE Inc. merged with gay journalist Jim Kepner's International Gay and Lesbian Archives and has been housed by the University of Southern California Libraries since 2010. ONE also operates an exhibition gallery for archive materials and LGBTQ+ art in West Hollywood. 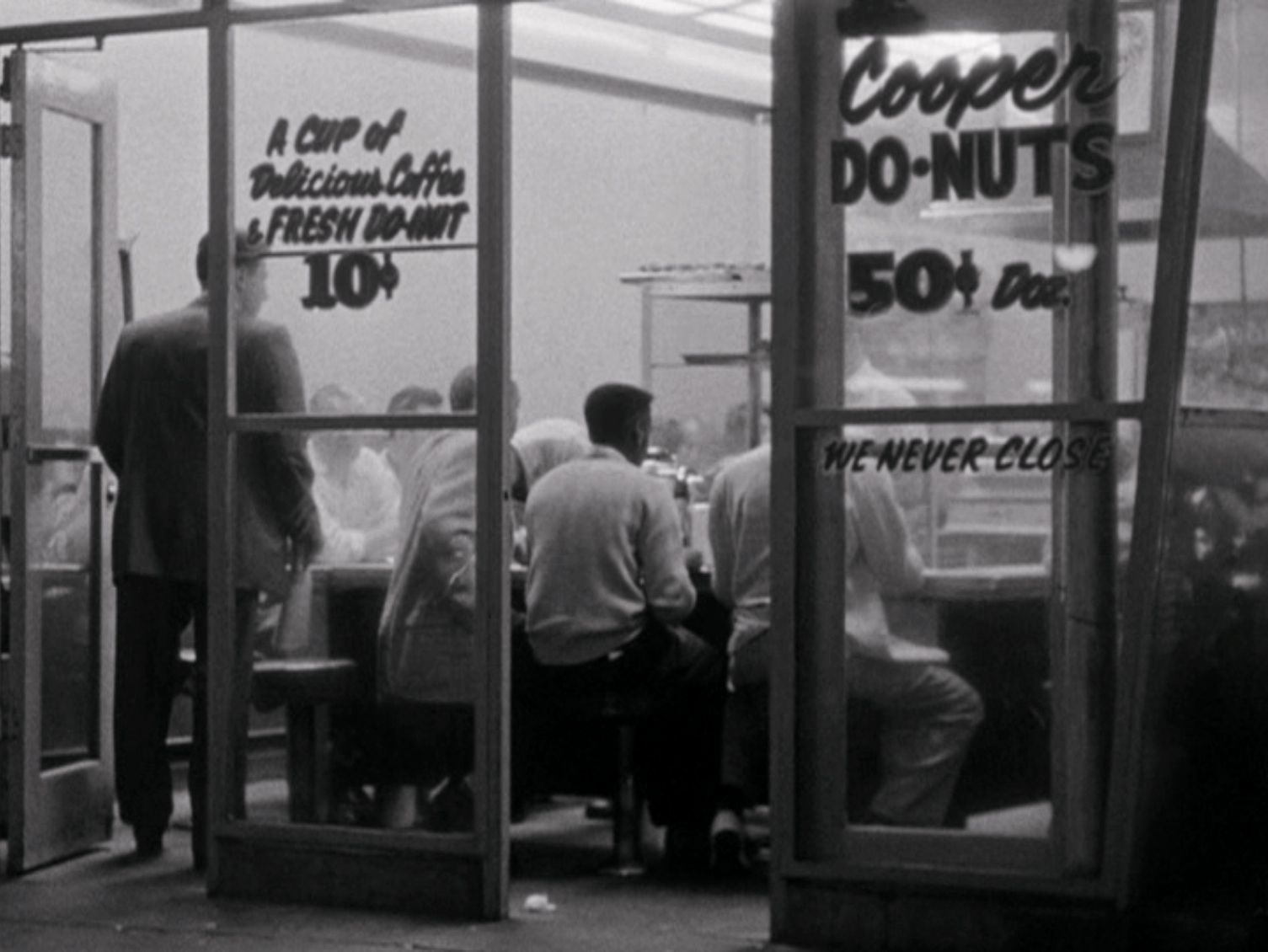 Ten years before the historic protest at the Stonewall Bar in New York City, the first documented and major confrontation of LGBTQ+ people in defiance of the police occurred at this location in the spring of 1959. The setting was Cooper’s Do-Nuts- a small donuts shop in Skid Row, Los Angeles. After LAPD officers arrested some men dressed as women while they were dining at Cooper’s, patrons began pelting the police with donuts and trash. 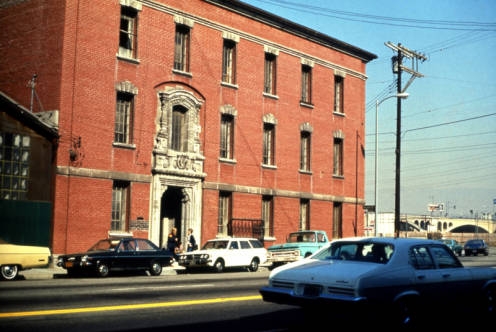 Established in 1973, the Woman's Building was a women-led arts venue and political organizing center that became known as a "feminist mecca" during its 18 years of operation. The project, then known as the Feminist Studio Workshop, was spearheaded by a group of women artists who felt frustrated with the male-dominated and frequently sexist arts spaces in Los Angeles at the time. The Woman's Building served as a multi-purpose space for art workshops, feminist and LGBTQ political organizing, and exhibitions put on by women. Notable lesbian feminist writers such as Audre Lorde and Adrienne Rich read and spent time at the Building. In 1991, the Woman's Building closed permanently and was designated as a Historic-Cultural Monument in June of 2018. 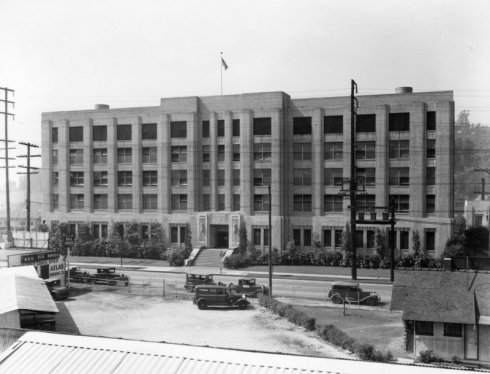 Opened in 1931, the Lincoln Heights Jail was one of the largest jailhouses in Los Angeles during its 34 years of operation. The five-story Art Deco style building was capable of holding up to 4,000 prisoners. Lincoln Heights Jail was historically significant for a number of reasons, including inmates ranging from notorious mobster Al Capone to actress Lucile Watson. For a time, the jail had a section with the derogatory nickname of "The Fruit Tank," where large numbers of LGBTQ individuals arrested after they were charged with "sex crimes." On December 25, 1951, Lincoln Heights Jail was the site of the "Bloody Christmas" beatings of seven prisoners that resulted in the first criminal convictions for LAPD officers in history and inspired a popular book titled L.A. Confidential alongside a film adaptation of the same name. The Lincoln Heights Jail was decommissioned by the City of Los Angeles in 1965. The building is currently in the process of being redeveloped. 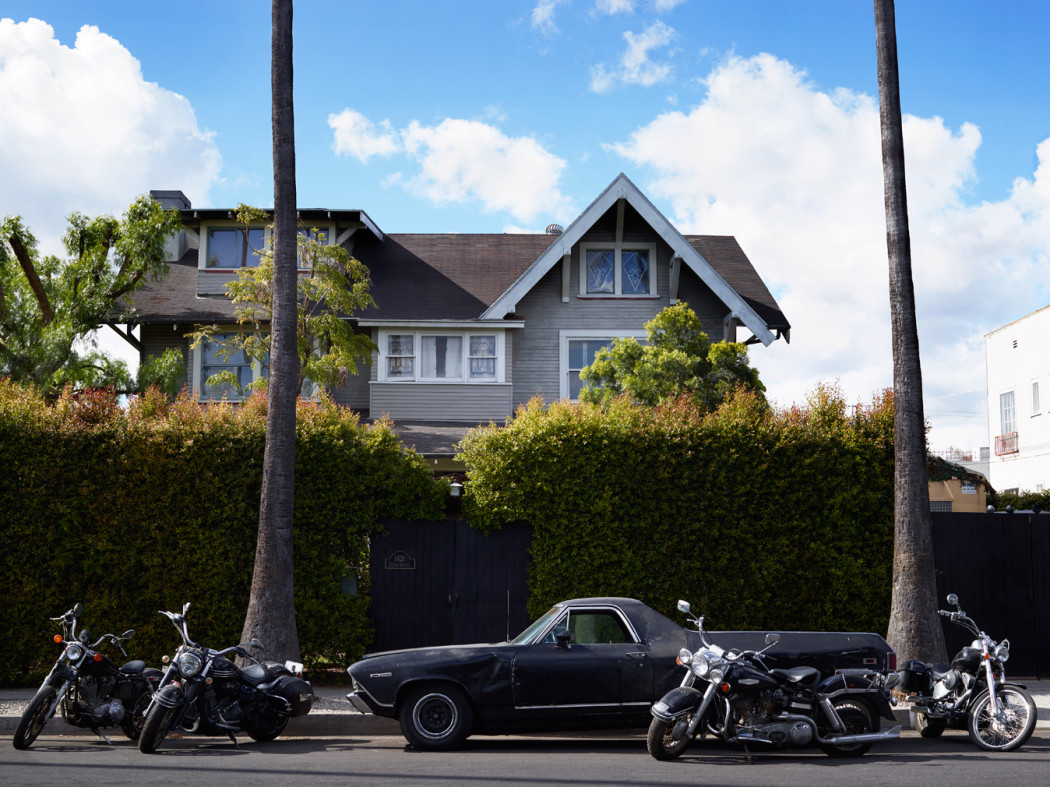 6. Tom of Finland House and Museum

One of the most influential gay artists of the 20th century, Finnish erotic illustrator Touko Laaksonen who was known by the pseudonym “Tom of Finland” lived in this two-story house during the time he spent in Los Angeles showcasing his work. His controversial illustrations, which typically featured men with exaggerated muscles in tight clothing, were incredibly popular among the gay male community. Along with his lifelong friend and owner of the house, Durk Dehner, the two men created the Tom of Finland Foundation in this house in 1984 to preserve Laaksonen’s work. Laaksonen died in 1991 of a stroke at the age of 71. In 2016, the Tom of Finland House and Museum was designated as a Historic-Cultural Monument by Los Angeles City Council. 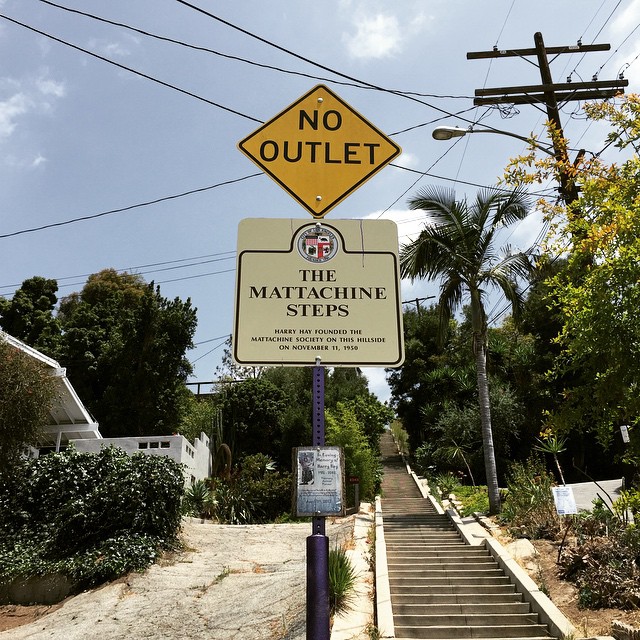 Founded in 1950 by labor activist Harry Hay and a group of his friends, the Mattachine Society was one of the earliest gay rights organizations in the United States. In 2012, this stairway was dedicated to the historic organization by the City of Los Angeles. The stairway is located near Harry Hay's former house where the Mattachine Society's first secret meeting occurred on November 11, 1950. 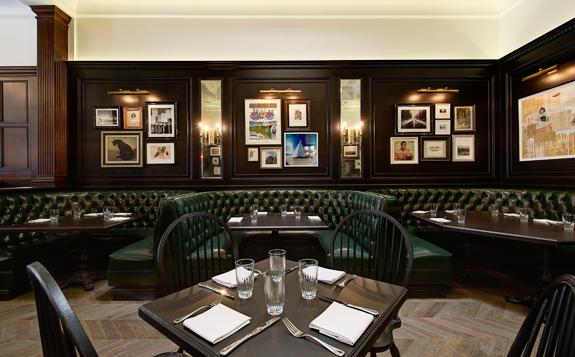 Located along Sunset Boulevard, the Black Cat Tavern was the scene of one of the first major protests against police harassment by members of the gay and lesbian community. Two years before the Stonewall riot in San Francisco, gay and lesbian patrons at the Black Cat waged one of the first public and organized protests against the police. On New Year’s Eve of 1967, police officers dressed in civilian clothing raided the Black Cat. The police, after assaulting the patrons of the bar, arrested many individuals for a variety of charges such as "lewd conduct." On February 11th, members of the gay and lesbian community of Los Angeles took the almost unprecedented step of holding a public protest of the police raid. 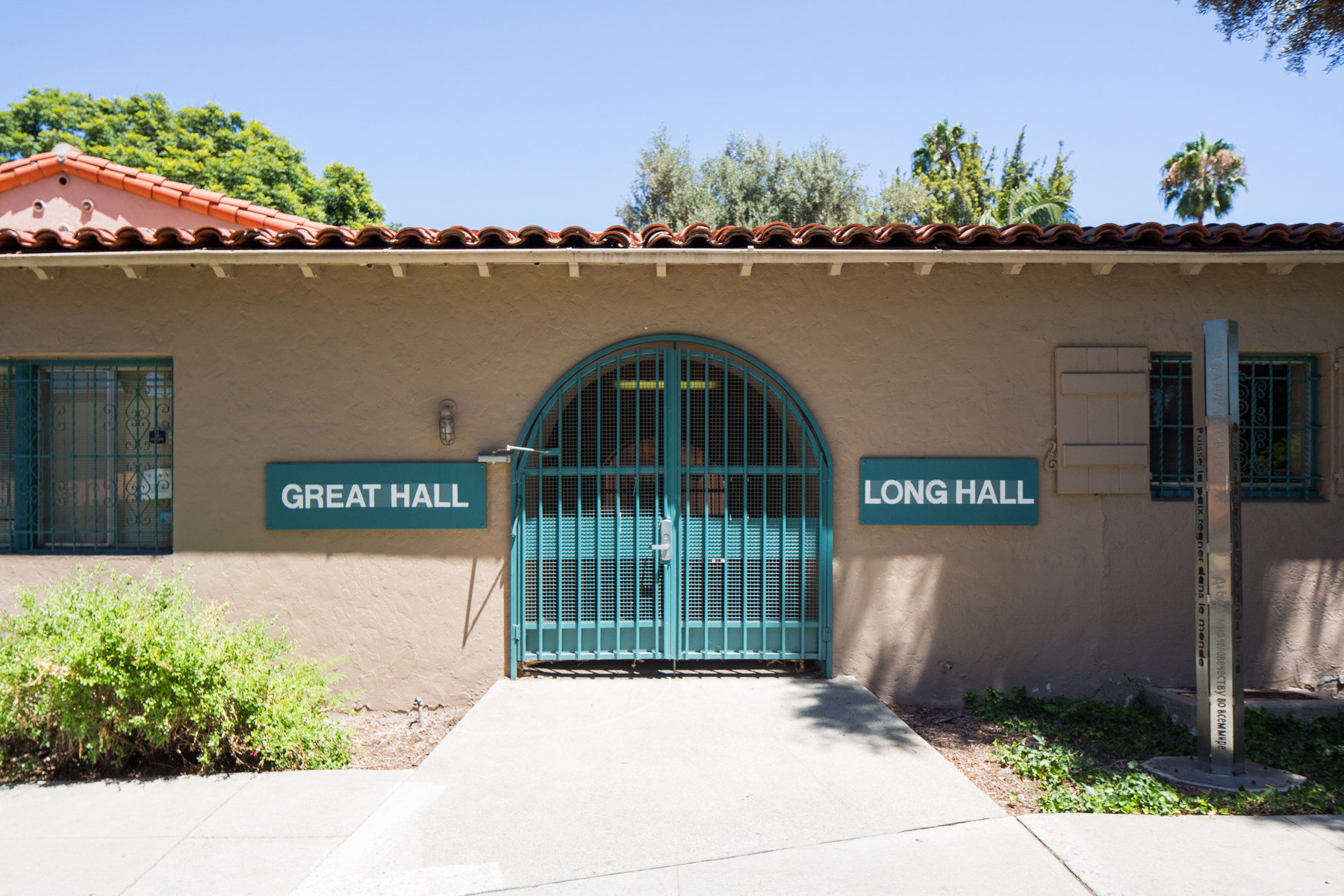 Previously known as the Plummer Park Community Clubhouse, Plummer Park's Great Hall/Long Hall is the only building in West Hollywood built using funding from a New Deal program (Works Progress Administration). After its designation as a Historic-Cultural landmark in 1935, the County of Los Angeles purchased four acres of homesteader and rancher Eugene Plummer's estate to build Plummer Park in 1937. Construction on the Hall was completed one year later. Most notably, Great Hall/Long Hall was often used throughout the 1980's and 1990's as a meeting space by the L.A. chapter of the international HIV/AIDS advocacy organization ACT UP. It was added to the National Register of Historic Places on July 22, 2013. 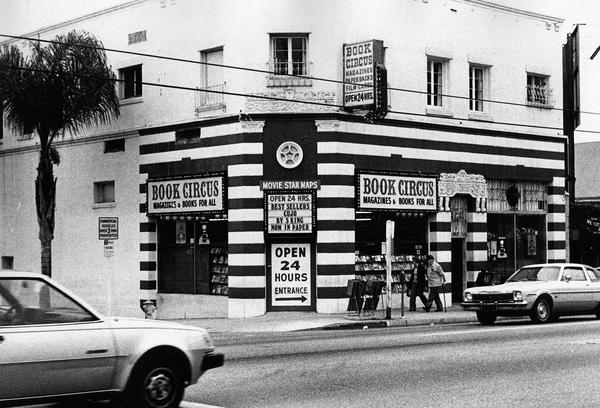 Opened under the name Book Circus in 1960, the small West Hollywood bookstore is notable for its history as a gay cruising spot throughout the late 20th century. The original store, which later became known as Circus of Books under the ownership of Barry and Karen Mason, offered an eclectic blend of back-list paperbacks, foreign newspapers, Bibles, and most significantly- pornography and adult toys. The Masons closed Circus of Books in February of 2019, but the store was bought by drag performer Chi Chi LaRue in January 2020 and was converted into Chi Chi LaRue's Circus, which honors the original bookstore's legacy while offering an expanded selection of LGBTQ art and adult items. 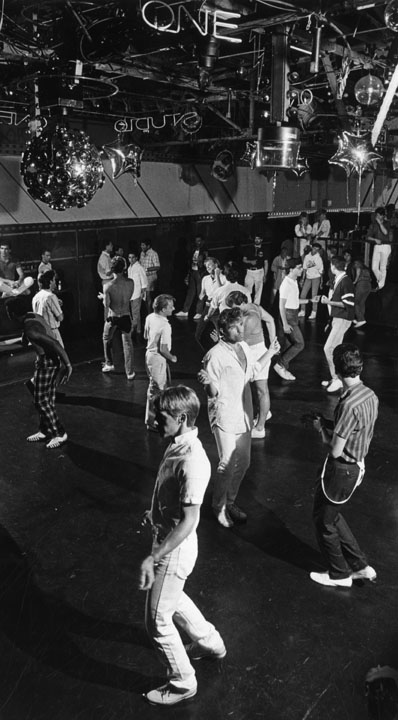 Built in 1929 as a manufacturing storage building for the Mitchell Camera Company, this building was first turned into a nightclub called The Factory in 1967. The club was incredibly popular among Hollywood's elites and celebrities, with a board of directors that included Paul Newman and Sammy Davis Jr. Despite its glamorous status, The Factory closed only four years after opening. In 1974, the building was then purchased by Scott Forbes- an openly gay Beverly Hills optometrist and party promoter. Renamed as Studio One, the discotheque became one of the most well-known gay nightclubs in the United States and hosted celebrities such as Joan Rivers, Liza Minelli, Bernadette Peters, Tina Turner, and Patti LaBelle. Studio One was also known for its discriminatory door policy, which notoriously excluded most women, racial minorities, and lower-class people. Forbes closed Studio One in 1988. The space is still used as a nightclub today under the original name "The Factory". 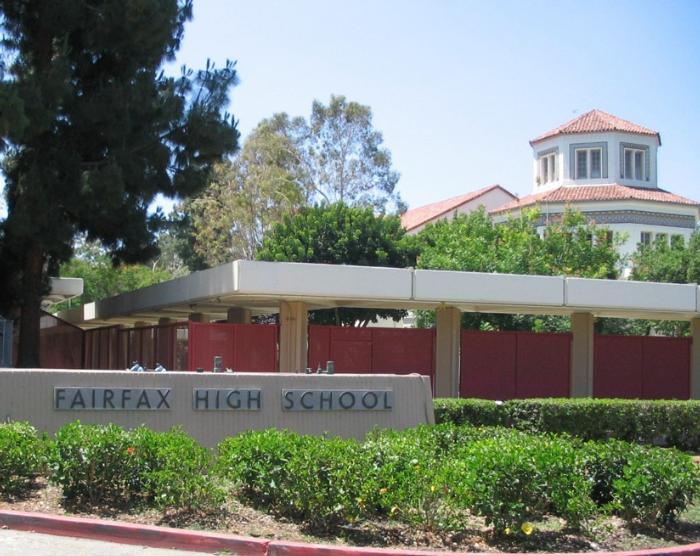 Established in 1924, Fairfax High School, named after Lord Fairfax of Colonial America and initially operated as an agricultural & mechanical school that emphasized preparing youth for employment. Due to shifting population demographics in Los Angeles, Fairfax High School became a predominantly Jewish school after World War II and even introduced Modern Hebrew classes in 1953. In 1984, the high school sparked national controversy when Dr. Virginia Uribe, a counselor and teacher at Fairfax, created Project 10 as the first dropout prevention program for LGBTQ+ youth in the United States. Today, with 93% of its students coming from minority backgrounds, Fairfax High School is widely regarded as one of the most diverse student bodies in the country.

Take a drive past some locations of hidden queer history in the City of Angels.