Constructed in 1896, the Dering Building is a unique architectural work in downtown Morgantown. The façade of the building belongs stylistically to the Romanesque Revival tradition. Other than the front face of the Dering Building, the design and ornamentation is simple and utilitarian. The structure was designed by famous Morgantown architect, Elmer F. Jacobs to house Edward Dering’s harness and tool business. When the automobile began gaining popularity over horses, Dering shifted business strategies and replaced his supply store with a funeral home. The Dering Funeral Parlor continued operation in the Dering Building until 1965, and remained in the Dering family until 1985. These days, the Dering Building hosts the Wild Zero Studios tattoo parlor.

Dering Building ca. 1955-1965. Note the sign on the ground floor for the Dering Funeral Parlor 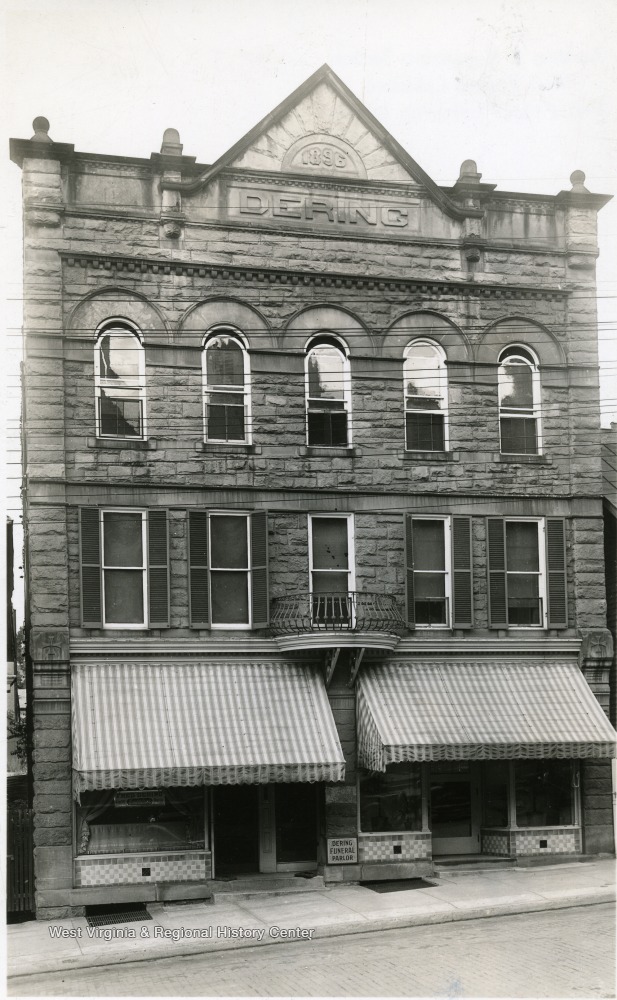 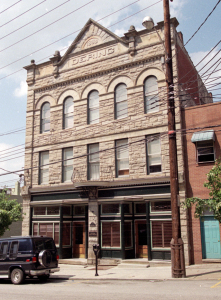 The Dering Building was constructed in 1896 to house Fred Dering’s harness and tool business. Dering had inherited the business from his father, Edward Dering. Edward Dering also ran a saddler shop on the property, though from a much simpler structure. Fred Dering wanted to convey a stronger sense of industry and importance with his storefront, so he commissioned Elmer F. Jacobs to design the building. Jacobs attempted to deliver on an imposing edifice by planning a three-story Romanesque Revival masonry façade. The first floor of the building features two nearly identical storefronts with recessed porticos. The second story has five regularly spaced rectangular windows which are separated from both the first and third stories by belt coursers. The third and highest story also has five regularly spaced windows, though they display arched hoods that are emblematic of Romanesque Revival. A triangular pediment – emblazoned with the date of construction and name Dering – caps the building.

In contrast to the attention given to the façade, the rest of the Dering Building is relatively unassuming. In part due to the structure’s location in downtown Morgantown, the sides and rear of the building are unornamented brick, as they would rarely be seen. There are some small windows on the sides of the building, and the rear features two rows of five windows each, similar to the façade. The interior has been renovated since the building’s construction. The first floor originally had a pressed tin roof, while the second and third floors had simple plaster moldings, walls, and floors. The roof of the building is flat and composed of asphalt.

Fred Dering had the acumen to understand that Morgantown’s burgeoning population at the end of the nineteenth century would need transportation supplies. For this reason, the businessman’s harness and tool business was extremely successful. When the automobile started becoming popular, Dering saw the writing on the wall for equine transportation and changed business strategies. In 1910, Dering shifted from providing equipment to providing a service by establishing a funeral home in his namesake building. This enterprise was just as successful as the harness and tool business was. Dering married Hettie Wade, daughter of famous local educator Alexander Wade, and had a son, Edward Wade. Edward Wade joined his father at the Dering Funeral Parlor and inherited the business in 1937. Edward Wade continued to operate the funeral home until 1985, though the location was moved from the Dering Building in 1965.