Dedicated in 1922 by the United Daughters of the Confederacy, this statue commemorates Confederate General Alfred Mouton who perished during the Civil war. There have been several major protest to have the statue removed, one in 1980 and the other recently in 2016. Mouton was a influential member in the community, but he was known for owning slaves and contributing to several acts of violence against African Americans. People within the city and surrounding area still see it has history and tradition, but this is a false hope leaning on the Lost Cause. There have been several attempts to have it removed and various prestigious people in Lafayette coming out about it being moved or taken down.

This statue of General Alfred Mouton was built through the efforts of the United Daughters of the Confederacy and dedicated in 1922. 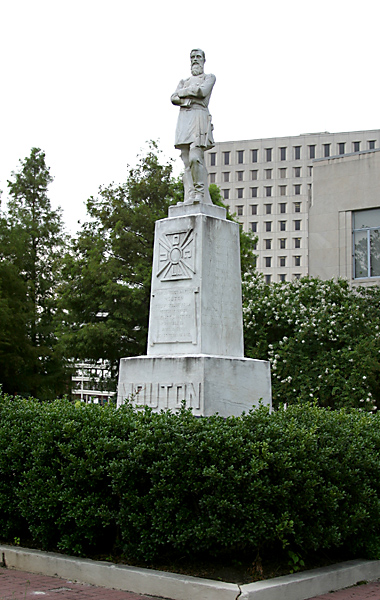 Mouton owned 120 slaves, more than anyone in the parish at the time of the Civil War. 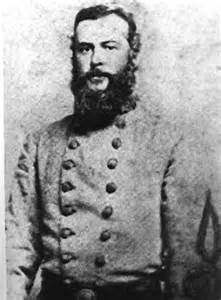 This image portrays the very large statue of General Alfred Mouton that stands in front of the old courthouse within Lafayette, LA. It has been attempted removal several times, but still stands today. The statue is still a very strong frame showing that the lost cause is still alive within the south and seems to be going nowhere without the removal of the statue. 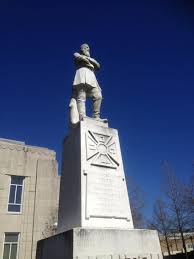 This is a image of a rally that was held to try to show the urgency to get the statue removed in 2016. These are supporters for and against having the statue or go. There are many people that still believe in the lost cause and this puts an effect on how the statue is viewed within the eyes of people. 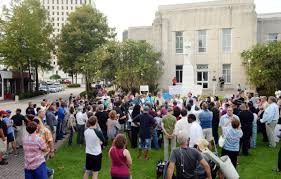 General Alfred Mouton was a general in the confederate army and the grandson of the founder of Lafayette, Louisiana. His family was very wealthy and owned many slaves during that time and were supporters of the Confederate side of the civil war. There is a statue of him in the middle of Lafayette, LA open for the public to see which stands as a remembrance of the lost causes history, or a white way of remembering the Civil War. The statue was put up in 1922 and there have been several attempts to remove the statue in 1980 and in more recent times in 2016. There are several activist groups that do not want this part of history still standing within their town representing what Lafayette shows themselves as. These groups include: Move the Mindset, Blue Acadiana Democratic Women of Acadiana, Indivisible Acadiana and the NAACP of Lafayette Chapter No. 6060. They find that the statue brings back too many memories of what the civil war was truly about. There are people within the town that strive to keep the integrity of the statue alive and that think it should still be standing tall.

The statue was put up by the United Daughters of the Confederacy in 1922 who also won a court case over the statue in 1980. The UDC is a hereditary association of Southern women established in 1894 in Nashville, Tennessee. The stated purposes of the organization includes the commemoration of Confederate soldiers and the funding of the erection of memorials to these men.

In recent years, there has been a great effort to remove the statue. Many people would like it moved in front of the Mouton residence, which is a historic landmark in Lafayette, others want it destroyed completely to try to rid of the lost cause memory. These statues that still stand have been a point of controversies all over the United States. In recent years a New Orleans mayor was able to pull all of the "generic" confederate statues down in the dead of night with no disturbances. He accounts these things in his book and talks about the problems he is facing, how he faced them, and what to be done with the lost cause memory that is so heavy within the south.

In 2016 there was a protest that brought hundreds of supporters in the movement to take it down and hundreds of supporters to keep it up. There was a court appeal to attempt the removal, but the Daughters of Confederacy had a court case won in 1980 that allowed the statue to still stand in the middle of Lafayette. This act had shown how strong the ties to the lost cause are in the south and they had made their case to keep it up.

The 1980 court case was ordered a permanent injection that prohibits moving the statue unless the city needs to do road work or sells the property. It is unclear why the city agreed to the permanent injunction and the court record provides no answer.

The lost cause memory, is trying to forget what the Civil War was about, is still very strong in the south and it can be difficult to combat. Lafayette can benefit by removing the statue or they could be hurt by not being a very progressive city as it might want to seem. Lafayette could be a flag city of removal and lead the way on stopping lost cause history. This cite has been attempted to be removed and nothing was able to be done, but this statue still stands very tall within the center of Lafayette, LA and should be handled soon. It is a center of controversy should be dealt with in some fashion. The statue is a sign to many different people within the city and there are still people trying to protect it and there are people actively trying to take it down.