Seneca Rocks is a local landmark located in Pendleton County in the Eastern Panhandle of West Virginia. It has a height rising nearly 900 feet above the Seneca Creek along with the South Branch of the Potomac River. The rocks are used for hiking and rock climbing. If you don’t feel like walking, you can ride a horse to the top.

World War II wilderness assault training school for the army during 1943 and ‘44. This was taken in June 1944. Richard Schoen, at left, and Frank “Lefty” Sadjewski. Photograph courtesy of Richard Schoen. 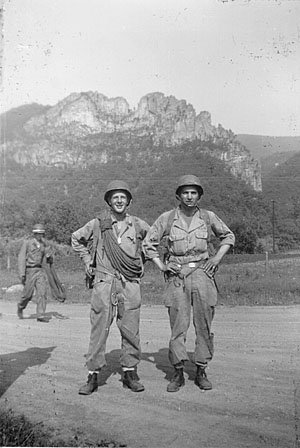 Closeup view of the "Gendarme" in1975 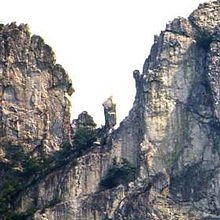 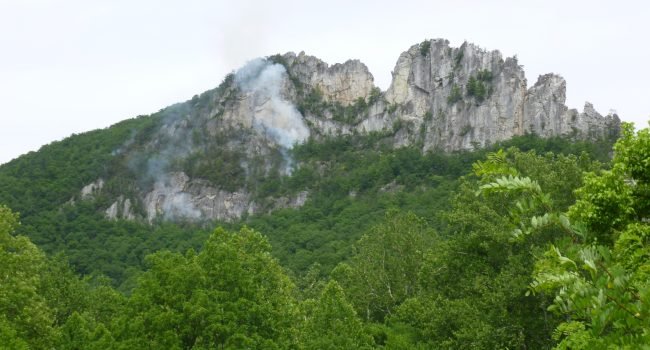 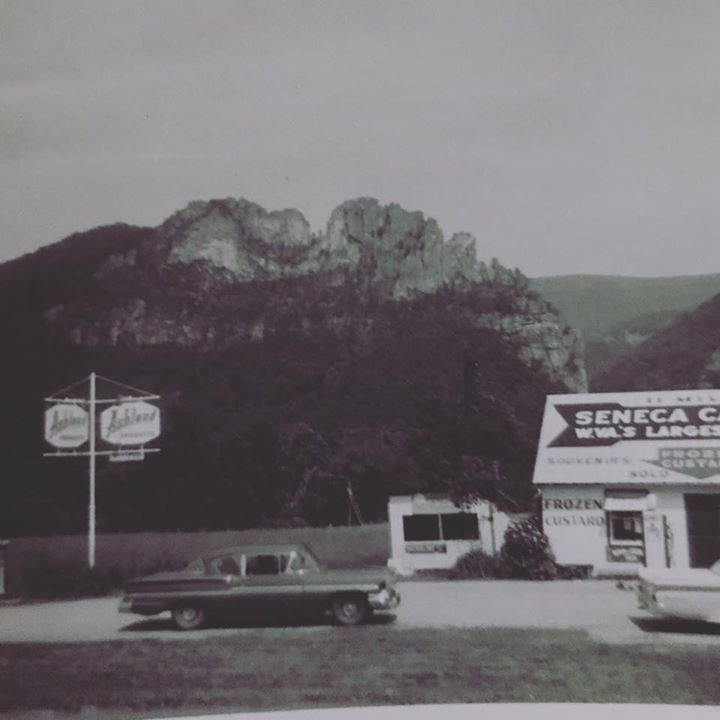 Legend has it that Seneca princess Snow Bird, ascended Seneca Rocks hoping that worthy suitors would be able to climb to the top, proving their worthiness. Seven men tried, but only one achieved his goal. This is likely never to have happened, since the Senecas were a tribe based in the New York area and used the trails surrounding the rocks strictly for transportation and hunting grounds.
Today, the scenic peak is visible from the intersection of Routes 28 and 33. It is the only "true peak", meaning it can only be scaled through traditional mountain climbing techniques, on the East Coast. It attracts thousands of visitors every year. Not only for mountain climbing, but hiking, fishing, water sports, and camping. The surrounding areas boast numerous attractions, such as Cabins, WV, near Smoke Hole Caverns.
The Seneca Trail, which followed the Potomac River, made the area a frequently used camp site for traveling Native American tribes. Excavation revealed indigenous dwellings over 600 years old. Europeans first encountered the rock formation in 1746. David Hunter Strother first depicted the range in 1853 and his works were later published in Harpers New Monthly Magazine in 1872.
As part of the efforts of WWII, the rocks were used as training grounds for the US military in 1943-44.  Thirty-two officers and men who were enlisted from the Mountain Training Center at Camp Hale, Colorado came to West Virginia.  Their mission was to set up and run the army's only low altitude assault climbing school, which was located at the base of Seneca Rocks.  It was operated as part of of the West Virginia Maneuver Area (WVMA).

These GI’s were an elite cadre of world class mountaineers known as the Mountain Training Group (MTG), sometimes called ski troopers or snow soldiers. The climbing school at Seneca and a pack-mule transport school in Tucker County were two of several training programs unique to the five-county WVMA.  Seneca Rocks was selected because of its rugged isolation and similarities to terrain found in northern Italy, the expected destination for those engaged in the training. Seneca Rocks was going to war.

In 1965, Seneca Rocks became part of Spruce Knob-Seneca Rocks National Recreation Area. The Visitor's Center was originally constructed in 1978 but was severely damaged in a flood in the 1985 flood. The pinnacle portion of the formation referred to as the "Gendarme" toppled and fell in 1987. In popular legend, this part of the formation was a relic of Princess Snow Bird.
The rocks can be hiked on a trail of varying difficulty. At the top, visitors find a viewing deck, with breath-taking views of the surrounding mountains.

On Saturday July 1, 2017 a fire on Seneca Rocks was reported. The fire was located on the hillside just below the observation deck on the hiking trail. One of the the biggest difficulties trying to put the fire out was the steep and rocky terrain. The fire burned in the understory, which was good because it helped clean out some of the vegetation.  The cause of the fire was caused by fireworks being illegally set off on the thick mountainous terrain.