One of the best-known rock formations in West Virginia, Seneca Rocks is a towering and jagged sandstone formation that rises 900 feet above the North Fork of the South Branch. The Seneca Rocks Maneuver Area was a part of the West Virginia Maneuver Area during World War II. The area inaccessible except by technical rock climbing techniques, making it an ideal training ground for soldiers before being sent to northern Italy. Instruction included rock scrambling, tension cable work with pitons, rigging skills, proper use assault ropes with pulleys and more. There was also two tactical night climbs on unfamiliar rocks. Approximately 180 soldiers cycled through this course every two weeks.

Left, The “Gendarme,” Seneca Rocks, 1985. A gendarme is a rock peak on a mountain that blocks and occupies a ridge of the mountain. 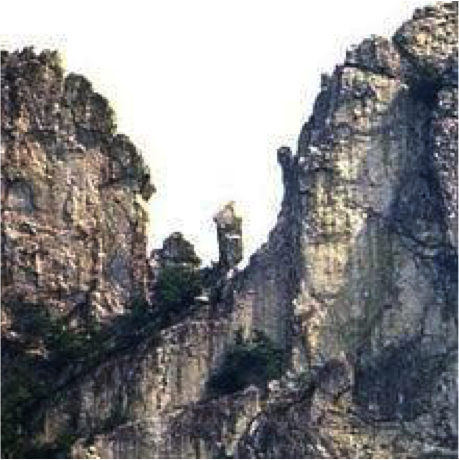 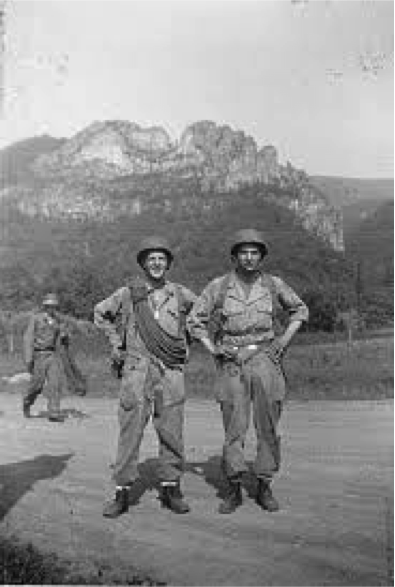 Seneca Rocks Marker. The marker mentions the legend of Snow Bird. Snow Bird was the only daughter of Chief Bald Eagle and his w 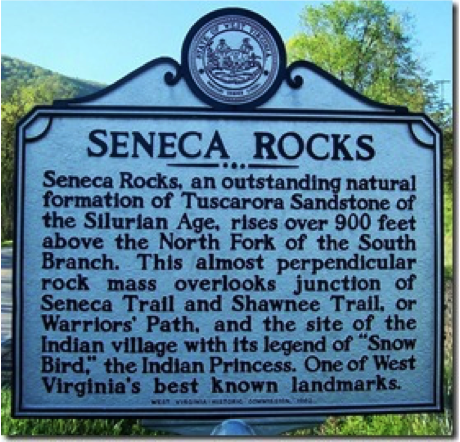 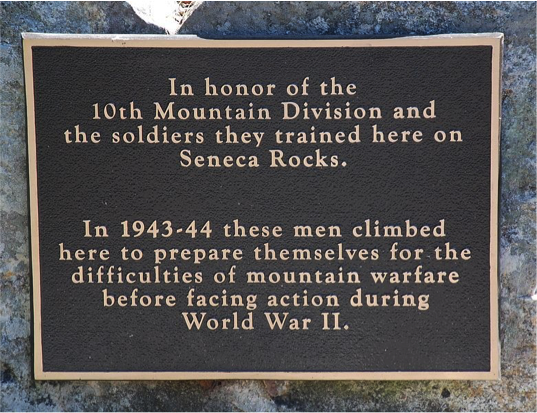 In 1943, a small number of army officers from the 10th Mountain Division of Camp Hale, Colorado were ordered to organize and oversee the armies’ only low altitude assault climbing school at the Seneca Rocks Maneuver Area of the WVMA. These elite GI’s, were also known as the Mountain Training Group, but were also sometimes called ski troopers or snow soldiers.

Several thousand soldiers trained at Seneca Rocks. Army maneuvers commenced under the command of the 13th Army Corps. The local command was headquartered at Elkins and included a signal battalion, quartermaster detachment, military police unit, a special services company, engineers, ordnance and other support elements. Before the war ended, seventy-five thousand metal spikes, called pitons, which are used  as an anchor to protect climbers from falling and/or aid in climbing were hammered into the rocks. The South Peak, or Tuscarora Formation, is called “the face of a thousand pitons.”

Raffi Bedayn served as a climbing instructor at Seneca Rocks, it was there that he began developing oval carabineers made from aluminum alloy 7075 T-6 which were much more lightweight than standard carabineers. His design wasn't commercially available until after the war but was used in military and the first ascent up Mount Everest and on the American Everest Expedition.

Techniques described in this book were used by U.S. forces in the battles in the North Apeninnes and the Lake Garda Alps. The book was published and later revised.

Between July 1943 and July 1944 when training ended, more than 100,000 soldiers were trained in the WVMA, among them the 94th Signal Battalion which fought in the Battle of the Bulge.Their training at Seneca Rocks prepared them for battles in the European Theater of Operations in Italy.

No one is sure who the first modern climber was, however Paul Brandt, Don Hubbard and Sam Moore reached the top of the south peak in 1938 and found the inscription “D.B. September 16, 1908”. Presently, you can visit Seneca rocks State Park located in the Monongahela National

Seneca Rocks is best known for its numerous climbing routes. This area has milder temperatures, and the faces of Seneca Rocks face east and west, so it is possible to either follow the sun or stay shaded throughout the day depending on which routes you choose. Many moderate routes exist on Seneca Rocks and helmets should be worn since some of the rock can be loose and knocked down when climbing. Guide services are available. These guide services often take climbers on their first climb or first multi-pitch route.

Seneca Shadows Campground is a National Forest campground with showers. The campground is located within walking distance to town and climbing. You may also camp at the Princess Snowbird campground which is in walking distance to Sites Homestead (a log house built by Jacob Sites in 1839), Discovery Center (visitor center and gift shop), swimming hole and several nearby stores and restaurants nearby, such as Harper’s Country Store, Yokum’s  General Store and The Front Porch restaurant.

One can also follow the Seneca Rocks Trail which is a 3.4 mile located near Seneca Rocks and is good for all skill levels. The trail offers a number of activity options and is accessible year-round. Dogs are also able to use this trail but must be kept on leash.

Location of Seneca Rocks Marker: On US Route 33 south of junction with WV Route 28. Erected by the West Virginia Historic Commission in 1963. This marker sits at US Route 33 and state routes 28 and 55, about 34 miles east of Elkins in Pendleton County.