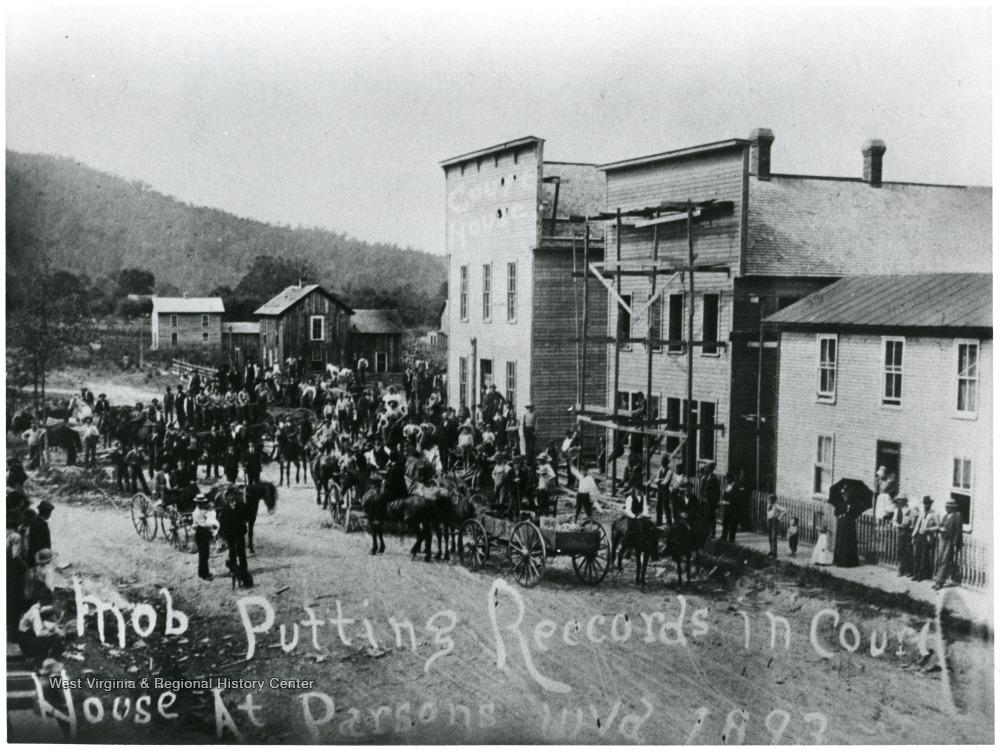 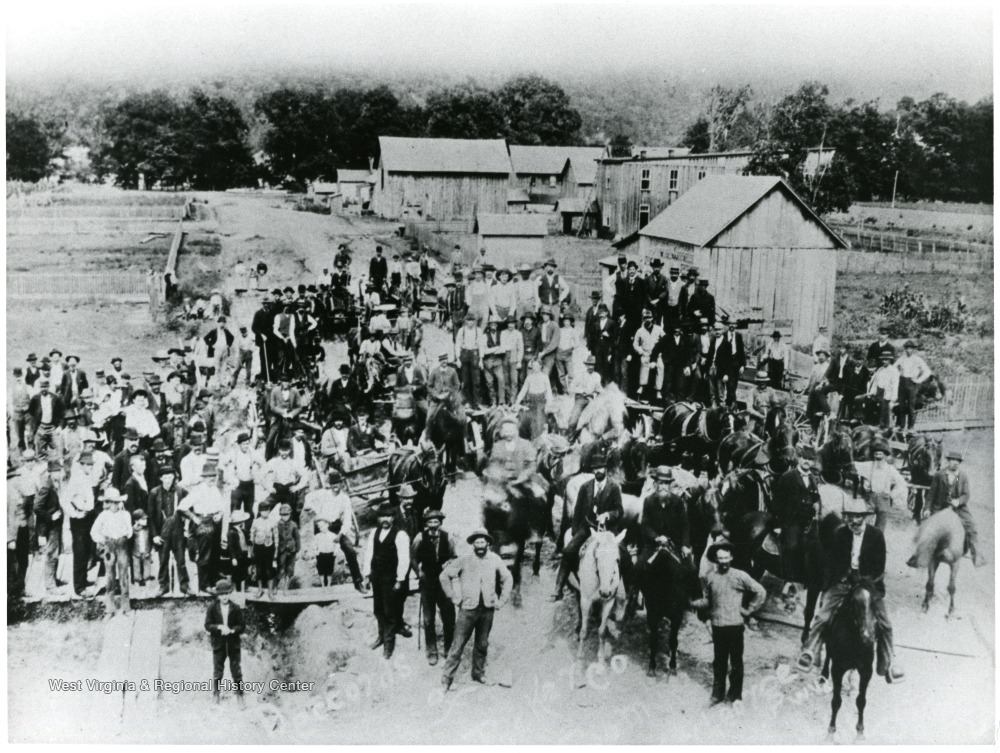 Headline from the August 9, 1893 issue of the Wheeling Intelligencer. 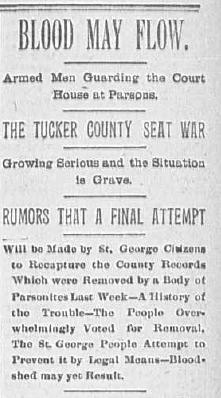 Following the Civil War and the creation of West Virginia as a state, dramatic social, cultural, economic and political changes swept the state as industrialization emerged by way of natural resource extractions in the Mountain State. As new towns formed that resulted from railroads traversing the mountainous state, these new communities often vied for the distinction of being the county seat, which significantly increased the chances of economic prosperity. After Reconstruction ended, and industrialization grew in West Virginia, the political culture of the state reformed to some degree that reflected national trends of a new industrial society. For West Virginia, the changing industrial atmosphere blurred the traditional political and cultural lines that paralleled the vestiges of Unionists and Confederate alignments. Industrialization, that is, offered more prosperity than the traditional agrarian life that predominated West Virginia (then Virginia) in its antebellum years. The political changes that took place in West Virginia during the late nineteenth century marked a turning point in the state’s young history, as new towns competed with old towns for the distinction and benefits of having the county seat and courthouse. One such example is the Tucker County Seat War between the old town of St. George and the planned town of Parsons beginning in the early 1890s.

In 1856, Virginia formed Tucker County and named the small town of St. George as the county seat, and in the subsequent decades, the town witnessed minimal growth. In 1888, St. George was devastated by fire, and much of the small town burned as a result. Furthermore, St. George experienced more bad luck as Henry Gassaway Davis bypassed the county seat while building his railroad, the West Virginia Central and Pittsburgh Railroad and built to Parsons while heading for Elkins, West Virginia. Meanwhile, as St. George’s population declined, the new town of Parsons population began to increase. Ward Parsons, the booster and namesake for Parsons, West Virginia began petitioning the state for the county seat despite having only a population of roughly 50 people in 1889 according to historian Ronald L. Lewis. Over the course on the next couple of years, Ward Parsons petitioned to the state, collected signatures, but failed to get a majority vote for moving the county seat to the town of Parsons on two different occasions. In a special election held in 1893, Parsons finally gained the votes and was granted the county seat, but residents of St. George did not stand for the vote and proceeded with legal action. Adam C. Minear, the former sheriff of St. George, “filed a bill of exceptions with the county court protesting election irregularities” and when that motion failed, Minear and William M. Clayton, the county clerk filed an injunction with the state supreme court.

When Ward Parsons heard the news of the injunction filed with the state supreme court, he became worried about the amount of time that the injunction could delay Parsons gaining the county seat position, and decided to take action in another manner. As Ronald L. Lewis noted: “Ward Parsons and his trusted partners formed an armed mob of about 200 men and headed to St. George to remove court records, documents, and furniture from the courthouse in St. George.” At the same time, the Parsons mob headed to St. George, former Confederate, Robert Ward Eastham, and 70 men arrived on a train from Davis to help Parsons in liberating the court records. Residents of St. George caught wind of the arriving mob and quickly armed themselves and prepared to defend their town. As the Parsons mob entered St. George, they were met by a small group of armed residents, and the sheriff ordered the mob to leave town. The St. George mob, significantly outnumbered, dispersed and the Parsons mob broke into the courthouse. Once inside the courthouse, the mob took court records, documents, furniture, and the bell which hung in the tower. The mob proceeded to load the materials from the courthouse in their wagons and headed back to Parsons. The next morning on August 2, 1893, Parsons was officially the county seat of Tucker County, West Virginia. Throughout the next few days, newspapers from West Virginia and across the country reported the event as the Tucker County Seat War, declaring the incident, “a disgrace to law, order, and decency,” the Wheeling Intelligencer noted on August 4, 1893.

Within a week, the Wheeling Intelligencer ran an article describing the tense atmosphere in Parsons as Ward Parsons, and his partners patrolled the town anticipating retaliation from St. George. While St. George did not physically retaliate against Parsons physically, they did so in a legal manner and took their case to the West Virginia Supreme Court of Appeals. In Hamilton et al. v. Tucker County et al. the court of appeals ruled in favor of Parsons. “Justice Henry Brannon, writing for the court, declared that no matter how the records were removed, the people of Tucker County had voted, and the county court had declared Parsons the new county seat. These proceedings had been lawful, and an earlier, forcible removal did not change the fact.” From this point, Parsons became the undisputed county seat of Tucker County, West Virginia. More importantly, the Tucker County Seat War’s anticlimactic skirmish is not necessarily the most significant aspect of the whole incident, rather the complexity of the situation illustrates a much more multifaceted string of sociocultural and economic dynamics that set in motion the event.

While traditional landed agrarian farmers held onto their social and economical way of life, industrialists in West Virginia also adapted to the changes sweeping the country and tried to steer West Virginia in the same industrial direction. In West Virginia, during the late nineteenth century, the state was politically divided and sectionalized by alignments leftover from the Civil War. However, industrialization blurred those sociocultural alignments, due to the potential economic prosperity that lied in West Virginia’s natural resources. Though traditionally a very difficult state to traverse, once railroads penetrated the state’s interior and became more accessible, industrializing enhanced a promising future. The composition of men involved with Ward Parsons and his partners illustrates the changing sociocultural nature of West Virginia as industrialization formed in the state. Ward Parsons and Robert Eastham were former Confederates wealthy landowners, while the other partners comprised of a doctor, lawyer, newspaperman, and farmers the consisted of an eclectic mix of former Unionists and Confederates. Industrialization not only changed the political dynamic of West Virginia as bother Republicans and Democrats supported the economic change, but cultural associations also shifted, mainly because industrialization offered economic prosperity for all willing to invest. Old political alignments did not define the Tucker County Seat War according to Ronald L. Lewis. Rather industrialization represented the dramatic changes that shifted the political culture of the state.

Economic opportunity superseded political factionalism, that is to say, political factionalism did not cease in West Virginia because of industrialization, but was certainly minimized as a result of economic opportunity. The Tucker County Seat War is not solely unique in West Virginia's history of industrialization and political atmosphere. Ronald L. Lewis notes that “more than twenty West Virginia Counties experienced such county seat warfare to some degree. Counties torn by divided loyalties during the Civil War accounted for some of them, but economic development played a dominant role in most of these battles during the late nineteenth century.” Industrialization and the railroads provided the catalyst for the county seat wars in West Virginia that when mixed with a combustible political atmosphere, and economic prosperity, local leaders were willing to straddle the fringe of legal boundaries to accomplish their goals.