Discovery of the Jones Diamond

In 1928, a rare and unusual discovery was made at this location by a man named William "Punch" Jones. While playing horseshoes with his father, Jones found an interesting shiny pebble in Rich Creek. He kept the diamond for a number of years before a Virginia Tech geologist confirmed the pebble he had found was a 34.46 carat diamond. At the time of discovery it was the only diamond ever discovered in West Virginia, the second largest diamond ever found in the United States, and the largest alluvial diamond ever found in North America. In 1984, Jones' descendants sold the diamond for $67,500. 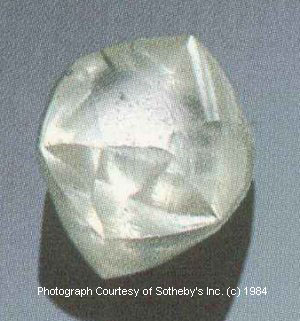 Historical marker in Peterstown, WV, where the diamond was found. 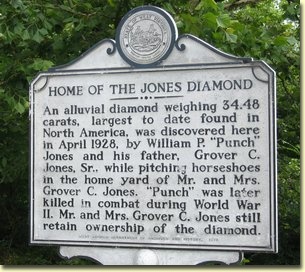 In 1928, William "Punch" Jones and his father were pitching horseshoes in their yard in Peterstown, WV, when one of their throws sent a horseshoe into nearby Rich Creek. While retrieving the horseshoe, Jones noticed a shiny, unusual pebble in the creek bed. He took the strange stone and kept it in a cigar box in the tool shed. Ironically, he gave little thought to the stone and over the next few years his large family (Jones had 17 children) struggled during the Great Depression. 14 years after its discovery, Jones took the stone to a Virginia Tech Geologist who confirmed that the strange pebble he found in Rick Creek was one of the finest and largest blue and white alluvial diamond ever discovered.

The Diamond weighed in at 43.46 carats and measured 5/8 an inch in diameter. The gem is the only diamond ever found in West Virginia and the second largest diamond ever found in the United States. The origins of the diamond are unknown. There are no natural sources of diamonds known in West Virginia. However, it is theorized that during the ice age glaciers deposited a few isolated diamonds throughout North America. It is also theorized that the diamond washed down the New River into Rich Creek from a source in Virginia, North Carolina, or Tennessee.