Item 1 of 16
This is a contributing entry for Stadium Historic District - Historic Homes Tour (2020) and only appears as part of that tour.Learn More.

Welcome to the Tour.

Welcome to this walking tour of historic homes in the Stadium-Seminary Historic District. This tour was produced by Tacoma Historical Society with support from the Pierce County Landmarks & Historic Preservation Commission, as well as Tacoma Creates. The Historical Society thanks them for their support, and thanks you for checking out this tour. "The Stadium-Seminary Historic District in the City of Tacoma is a residential neighborhood of substantial two and three-story homes developed between 1888 and 1930. It is located northwest of the central business district on a high sloping site along a bluff overlooking Commencement Bay. Within the district there are nearly 400 buildings in an area encompassing the equivalent of 50 blocks. This neighborhood is distinguished by its exceptional quality and variety of architecture and its unusual continuity of period that is only rarely interrupted by more modern structures."

Boundaries of the Stadium-Seminary Historic District 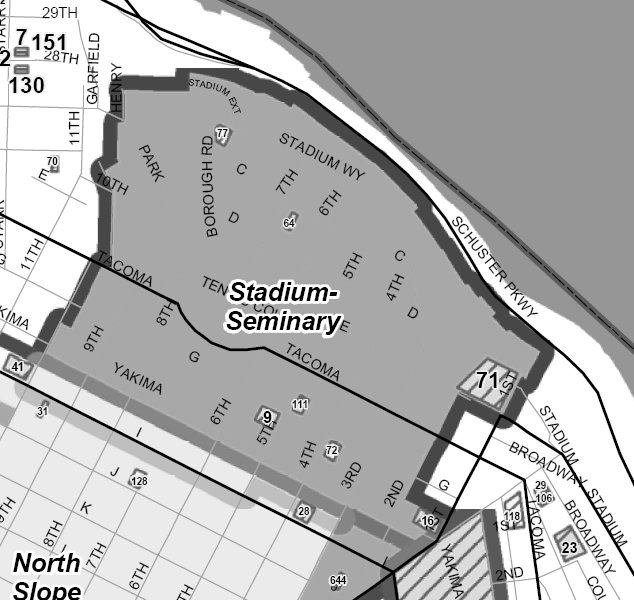 "Dominant architectural styles within the district are Queen Anne and Colonial Revival styles; Tudor, Chalet and California Bungalow styles; and Mediterranean, or 20th century Italian Villa Style. There are also homes in the "Modern English", or Jacobethan vein, and there are a number of "Colonial" cottages and "Norman Farmhouses" representing the latest historic period of development. Interspersed in the east and south portions of the district are pattern-book cottages arranged in identical sets of two or more. The apartment buildings have an assortment of historical surface details derived from several of the styles mentioned above.

Lawns and street trees (predominantly Horse Chestnut and Maple) contribute to a pleasing, overall impression of green space. Although his proposal was never used because of unforeseen political and economic considerations, Frederick Law Olmstead was commissioned to prepare a master plan for New Tacoma in 1873. The general concepts of the City Beautiful Movement did influence the eventual layout of the Stadium-Seminary district when construction began 15 years later. It was a planned development on a fairly grand scale which is today most apparent in the extensive street plantings, orientation to vistas and distribution of open space. Wright Park and Garfield Park are located on opposite sides of the district, although the former is separated from the neighborhood by a major arterial. Annie Wright Seminary and an undeveloped ravine provide additional landscape features of contrasting texture - one carefully maintained, the other left in its natural state.

The plat of the district is on an angled grid - skewed 45 degrees with respect to the adjoining parts of the city. The streets are oriented parallel and perpendicular to the shoreline over an almost equilateral wedge-shaped section that comes to a point further up the hillside beyond the district boundaries. The cross streets afford incomparable views across the harbor and Puget Sound with the Olympic and Cascade Mountain Ranges in the distance. The exact orientation of these vistas was apparently an important consideration. Had the grid followed the pattern in other parts of the city, the streets running down the hillside would have focused attention on the tide flats at the mouth of the Puyallup River (now heavy industrial development near the Port of Tacoma)."