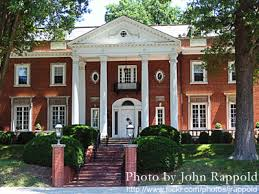 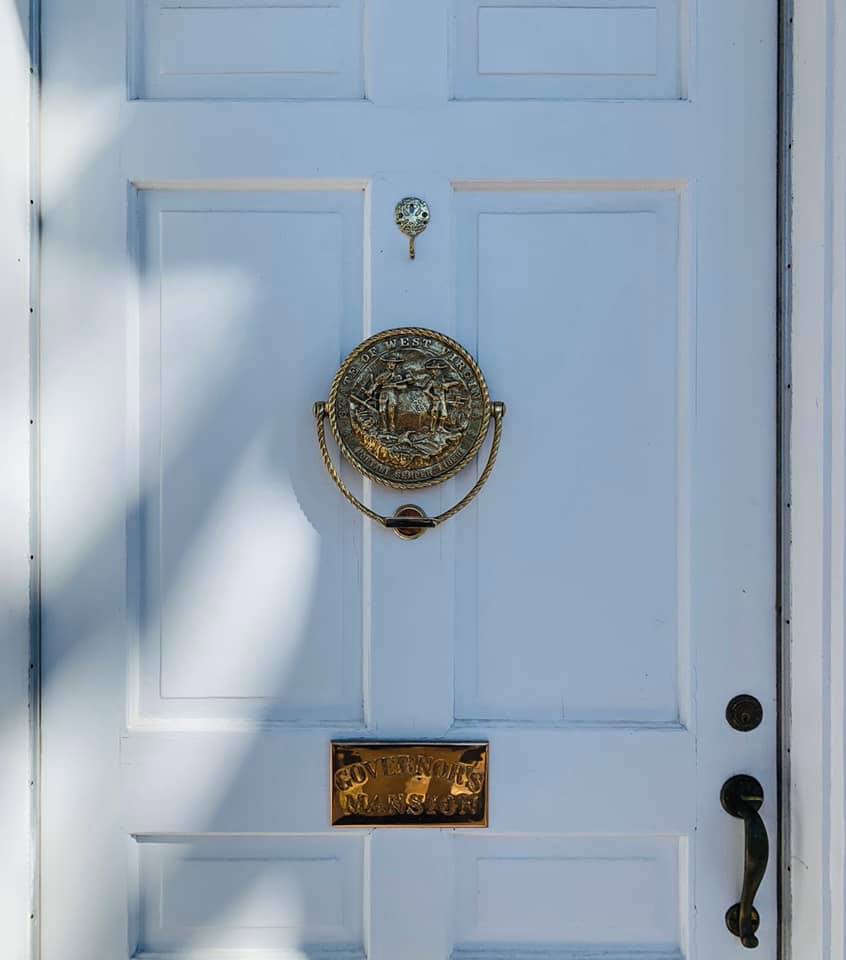 The Main Level of the West Virginia Governor's Mansion 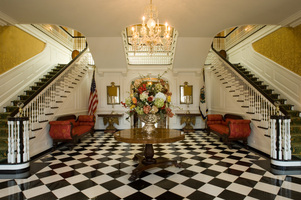 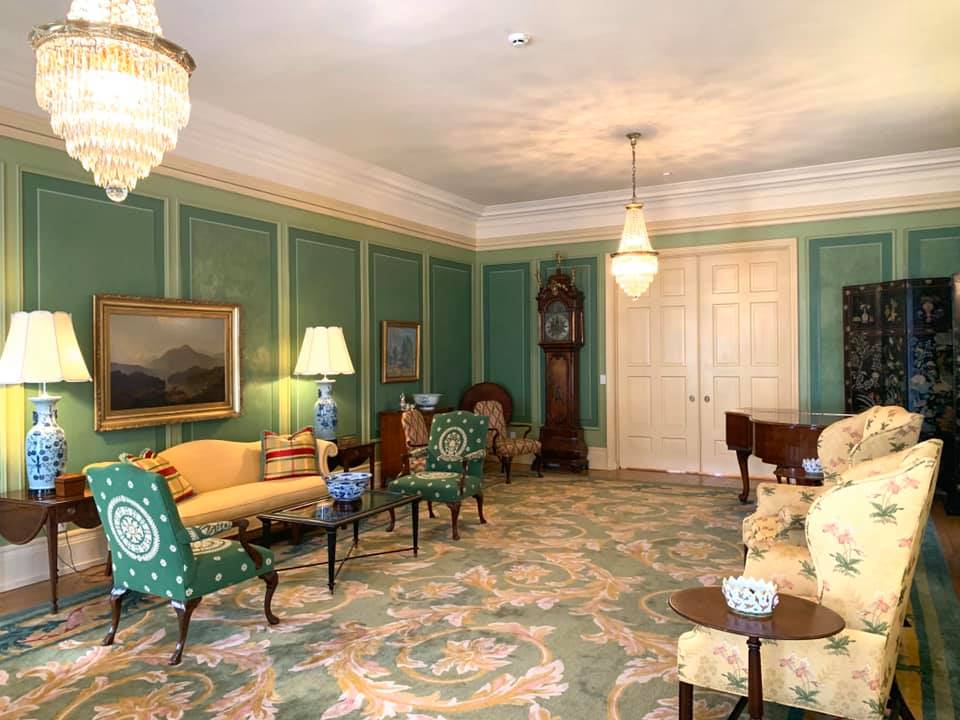 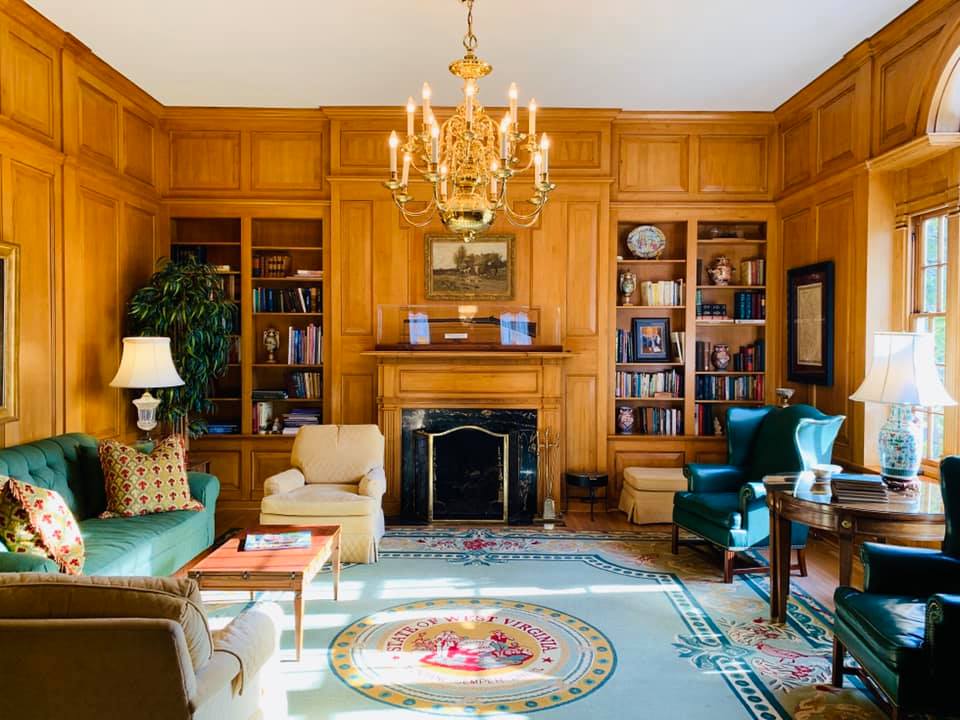 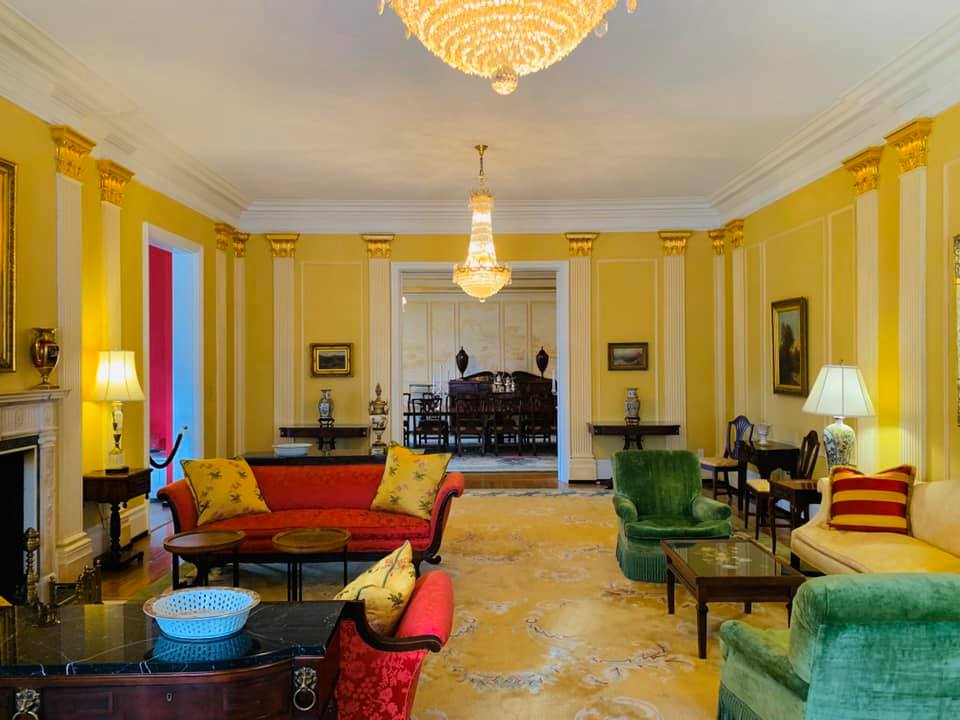 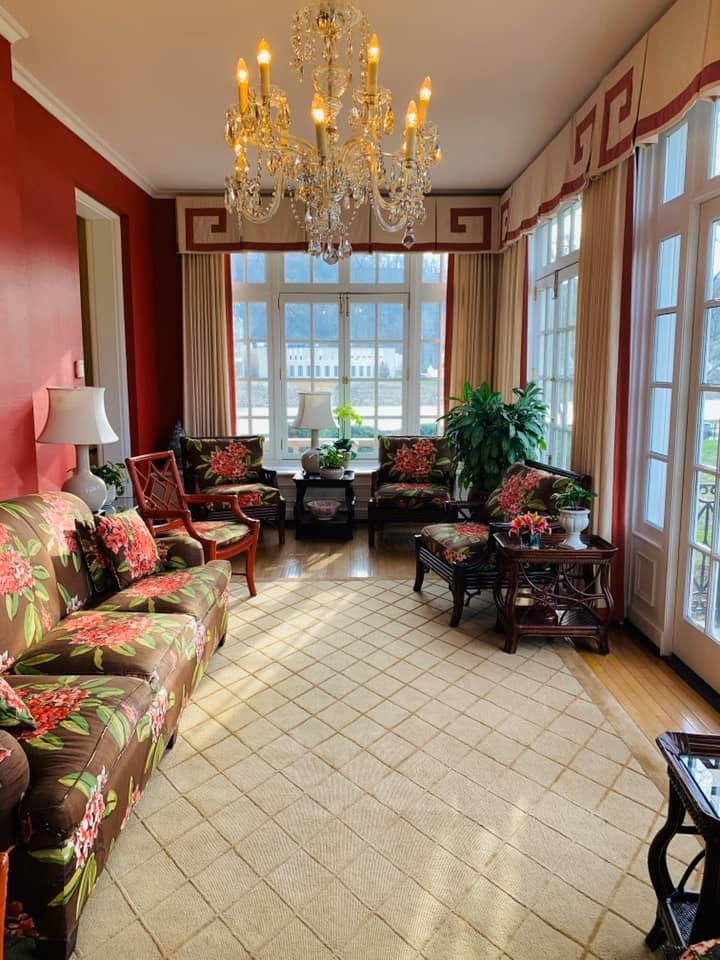 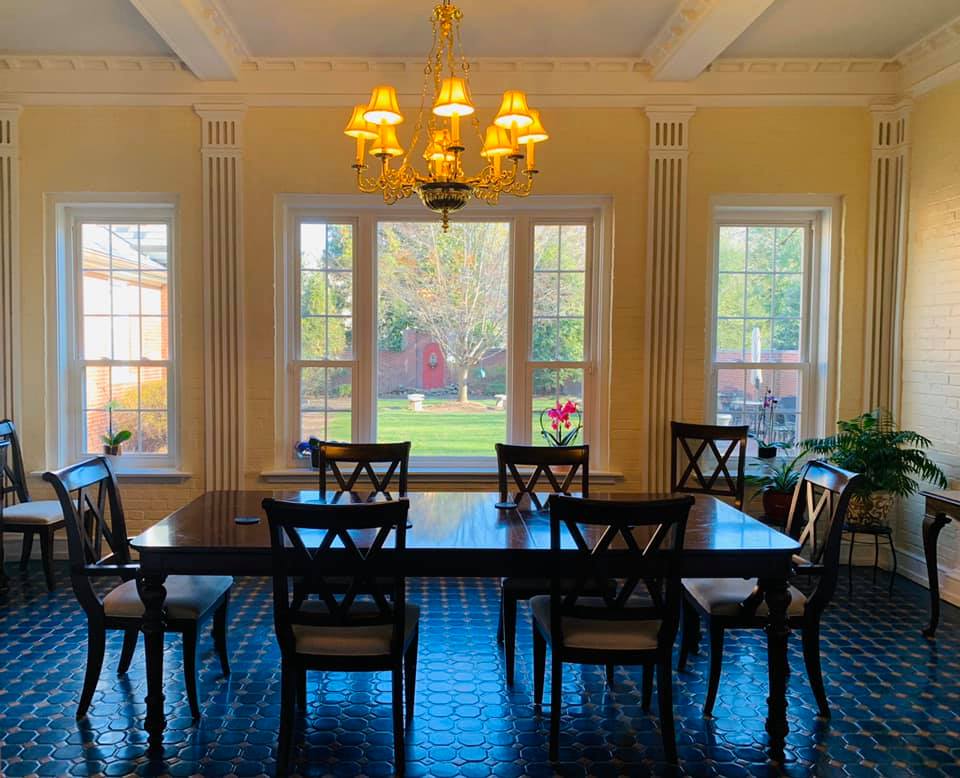 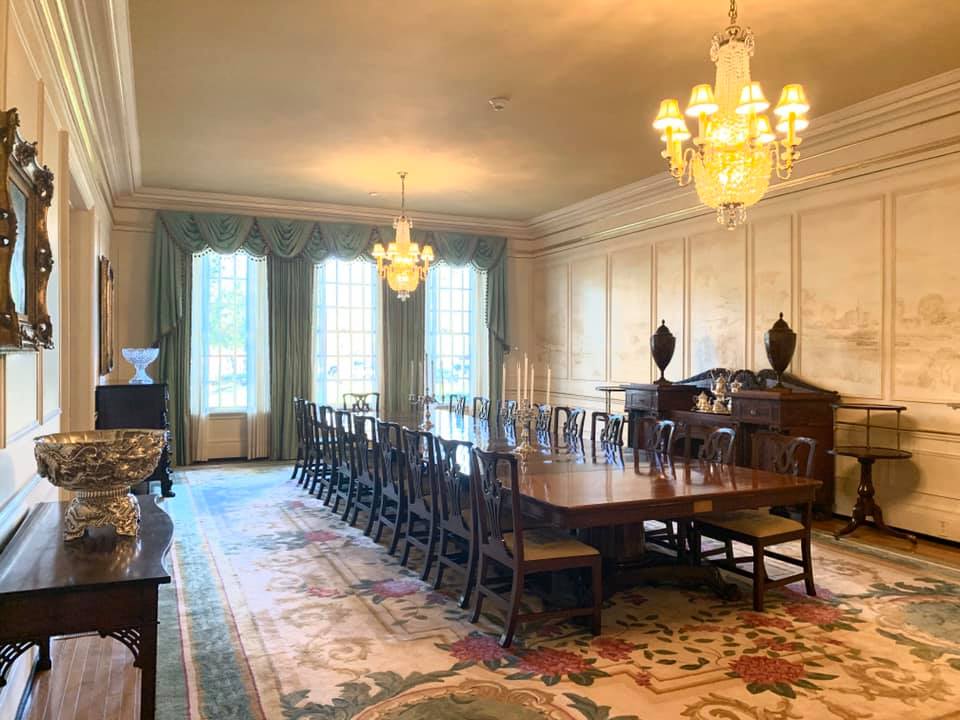 Cabinet Set of All the Silverware, Porcelain and Glassware Used at Mansion 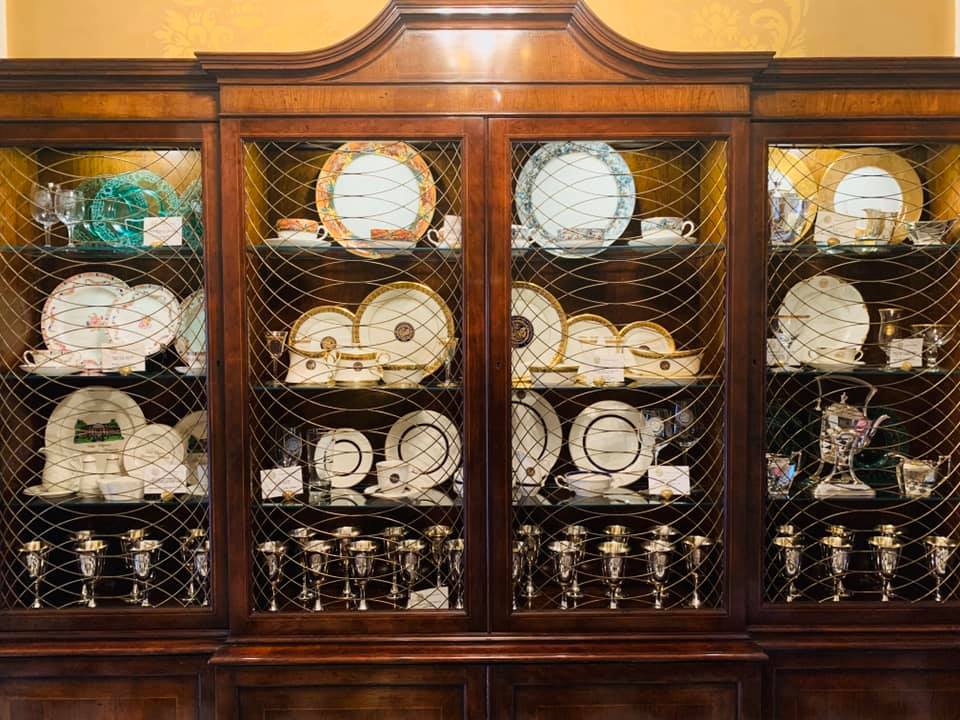 Bornholm Grandfather Clock that is Over 300 Years Old 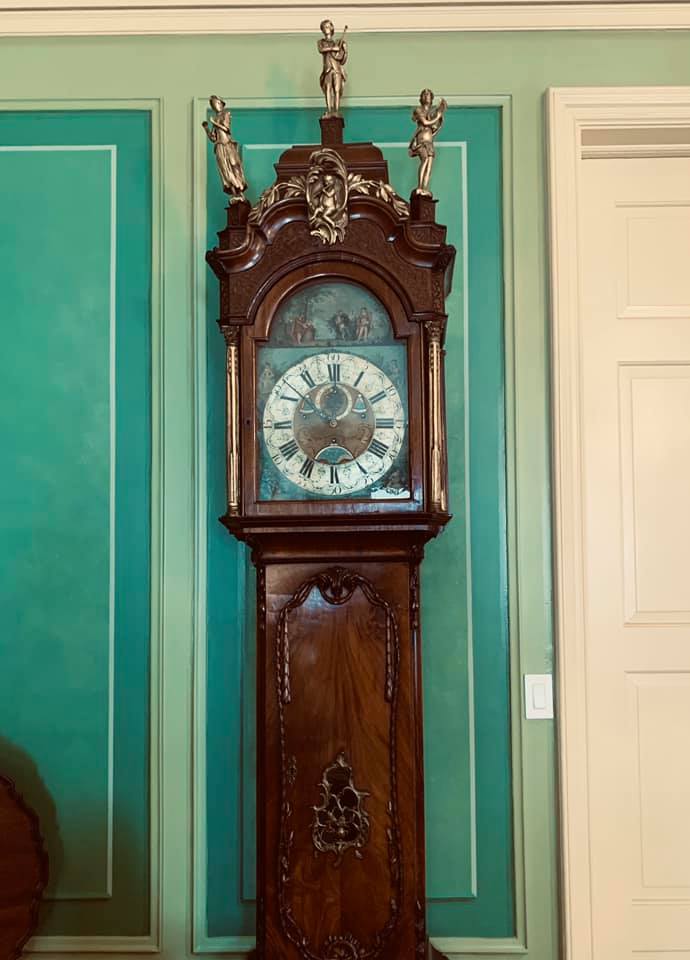 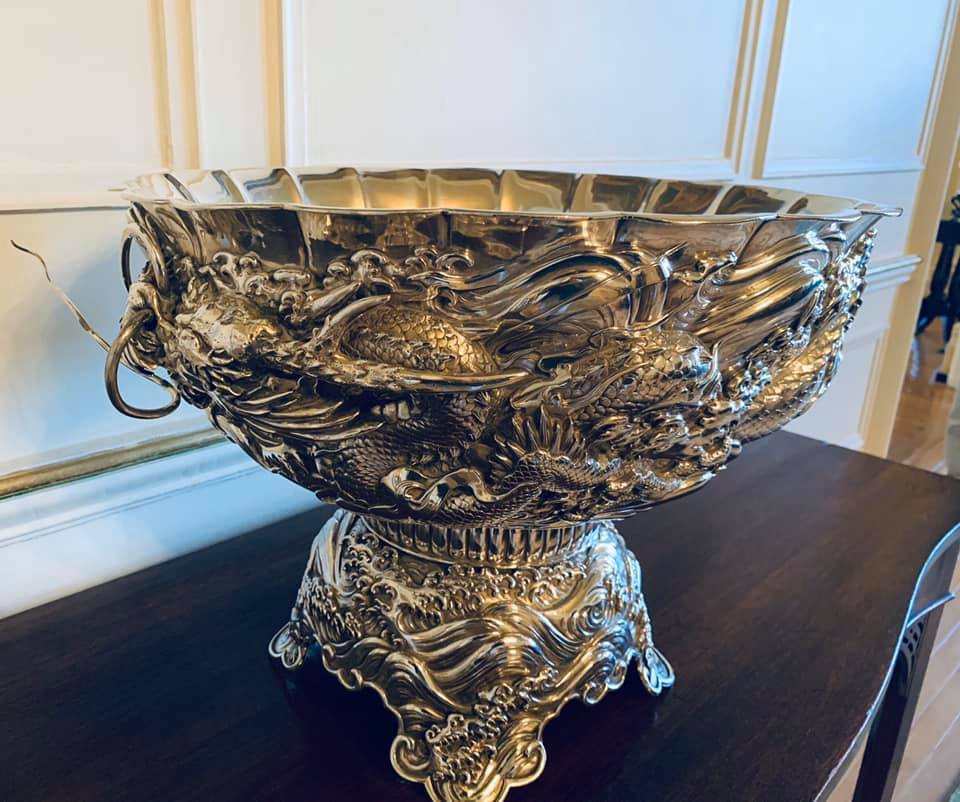 Mahogany Dinner Table that is over 200 Years Old 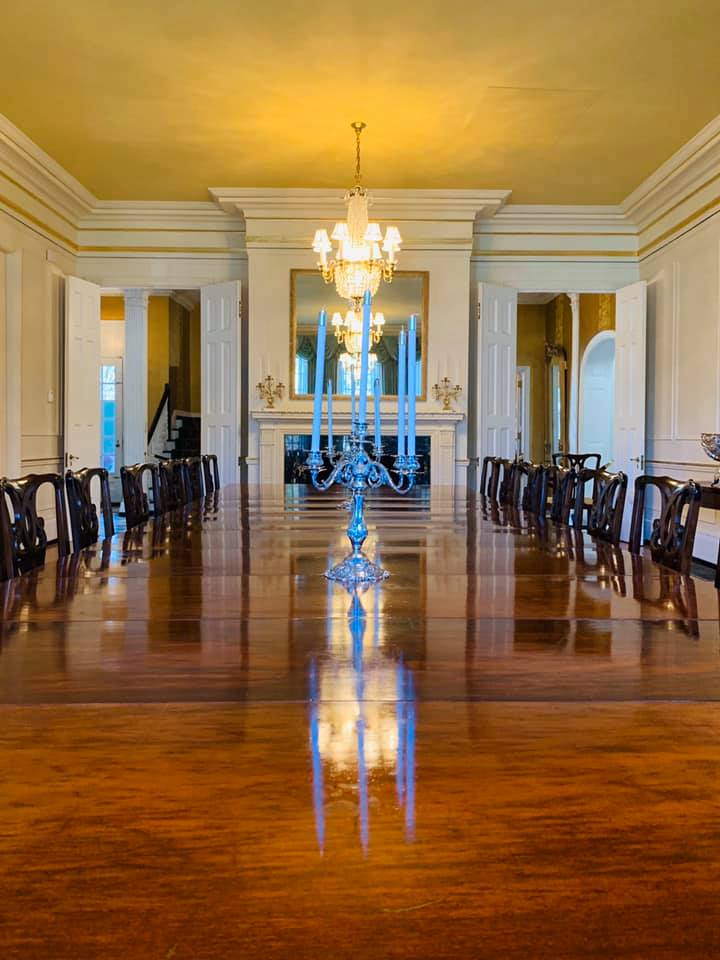 In 1893, when Governor A.B. Fleming was leaving office, he requested that the Legislature appropriate funds for the purchase of a state-owned Governor's Mansion. The legislature responded by providing $22,000 for the next Governor, William MacCorkle, to buy and furnish a residence. MacCorkle purchased a stately frame dwelling situated across from the state capitol building which at that time was located downtown on Capitol Street in Charleston. Before Governor William MacCorkle, governors paid for their own housing expenses while living in the capital city.

After the Capitol burned in 1921, the Legislature passed a sales tax to provide revenues for the construction of a new Capitol. The tax also included an appropriation of $100,000 for the construction of a new Governor's Mansion. Governor Ephraim Morgan selected Walter Martens, a Charleston architect, for the project. Martens consulted with Cass Gilbert, who was the architect of the state capitol. Governor Morgan and his wife moved into the new mansion in 1925 with one week left in his term. Mrs. Morgan had the opportunity to give creative input of the interior design of the mansion, which Martens did not protest. When completed, the mansion was reported to cost about $200,000-twice the amount originally planned.

The interior of the mansion is more luxurious that what can be perceived on the outside. Once entering the mansion, you are met with checkered floor tiles made of white Tennessee marble and Black Belgian marble, twin stair cases that lead to the upper floor that has all the First Ladies, and golden colored walls painted to look like Silk Damascus wallpaper. The right of the foyer is the primary living room housing exotic and familiar artifacts and furnishing. The walls are done in a celery palate, the chandeliers were donated to the mansion from the Victorian Crystal Ballroom that was once on Capitol Street in the 1940s, a cherry wood Baldwin Grand piano sits to the back corner of the room with a 150-year-old Qing Dynasty Chinese screen behind it. The oldest artifact on display is a Grandfather clock that is over 300 years old, and was made by Jan Hinkle from Amsterdam. Displayed on the face of the clock gives you the time of day, the date, and the different moon phases of the night.

The library of the mansion is where the governor holds most of his private meetings. It is done entirely in White Butternut wood from the state, houses books written by West Virginians and western Virginians, A twin barrel shotgun from the late 1800s sits on the fireplace mantle, which is made of Black and gold Belgian marble. The governor has his own private dining area on the ground floor and living quarters on the first, but the most stunning room is the primary dining quarters. A table that is over 200 years old, made of solid mahogany, and can sit up to 25 guests can be seen when entering, hanged canvases that mold themselves to the wall depict various locations and imagery that show off West Virginian culture and history, and a sterling silver punch bowl from Japan depicts a Asian Dragon on the side to represent power and wisdom.

A cabinet set showcases the varieties of dishware that is served at the mansion. All the porcelain comes from the West Virginian Homer Laughlin China Company and the glass is from the Blenko Glass Company. Some dishes are for seasonal decorative use, and others with an 18-karat gold inlay are reserved for more special occurrences. The bottom of the shelf shows silver goblets that not only represent all 55 counties of the state, but were made from 55 different silversmiths from their county.

The final rooms are the ballroom and the sunroom. The ballroom is simply used as a secondary living room now, and has a saffron palate for the walls, zinc and copper canter leaves on the fluted column inlays, a fireplace moved from a castle from Ireland, and chandeliers from the Scotts Brother Drug Store, which closed in the 1940s. The sunroom looks to the west and has furniture designed by the same designers of the Greenbrier Resort's interior, Dorthy Draper & Company. The seating has the rhododendron flower with a chocolate palate, and curtains that are done in the classical style that represent the waves coming off the Kanawha River.

Tours: Monday-Friday (9:00am - 2:30pm) Tours must be made at least 24hours in advance. Maximum of 50 guests per visit, parties of over 50 will result in consecutive tour times. Mansion tours may be cancelled at any time. No food or drink allowed inside.