Justus Collins (December 14, 1857-October 18, 1934) made a lasting impression on West Virginia as a coal operator. Known for his octagonal company stores, he brought work to the "smokeless coalfields" of West Virginia. His house stands at 1116 Kanawha Blvd. E. in the Charleston (WV) Downtown Historic District. 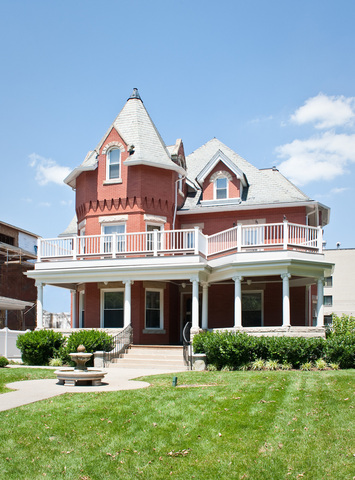 Born in Clayton, Alabama, Justus Collins began his career as the supervisor of the convict mine laborers, working for the Woodward Iron Company.  Around 1887, he left Woodward as secretary of treasury and moved north to the new "smokeless coalfields" of West Virginia. Shortly after his arrival in West Virginia, he organized the Louisville Coal and Coke Company. Collins went on to open many companies, including the Collins Colliery, Whipple Mine and Greenbrier Coal and Coke. His iconic octagonal buildings were found at both the Collins Colliery and Whipple Mine where it now serves as a local landmark. After selling the Collins’ and Whipple mines to New River Company, he went on to organize the Superior Pocahontas Coal. In 1910, he pioneered the Winding Gulf Coalfields with Winding Gulf Colliery. By 1929, he consolidated all of his mining properties into Winding Gulf Colliery Companies. Despised by workers and feared by competition, Justus Collins used integration and diversity in mines as tools to prevent miners from unionizing.

Justus Collins moved to Charleston, where his house has since become a local landmark. Built in 1897, the Queen Anne-style brick house is now owned by the Diocese of Wheeling-Charleston, and is part of the Downtown Charleston Historic District. The house was added to the National Register of Historic Places in 2006.