This four-story row townhouse was constructed in 1895 alongside many others on Delaware Street at this time when numerous millionaires and people of influence called this neighborhood home. The Birge-Horton home enjoyed an elegant design and plenty of modern amenities and the home's owners and neighboring residents were among many leading Buffalo citizens tied to community activism, social events, politics, and business. The home's second owner, Katharine Pratt Horton, represented Buffalo at World's Fairs and other expositions across the country. She also founded the local chapter of the Daughters of the Revolution (DAR). When she died, Katherine Horton left her house and money to the DAR. The organization remains in the historic home and operates today as the Katherine Pratt Horton Buffalo Chapter, National Society Daughters of the American Revolution. 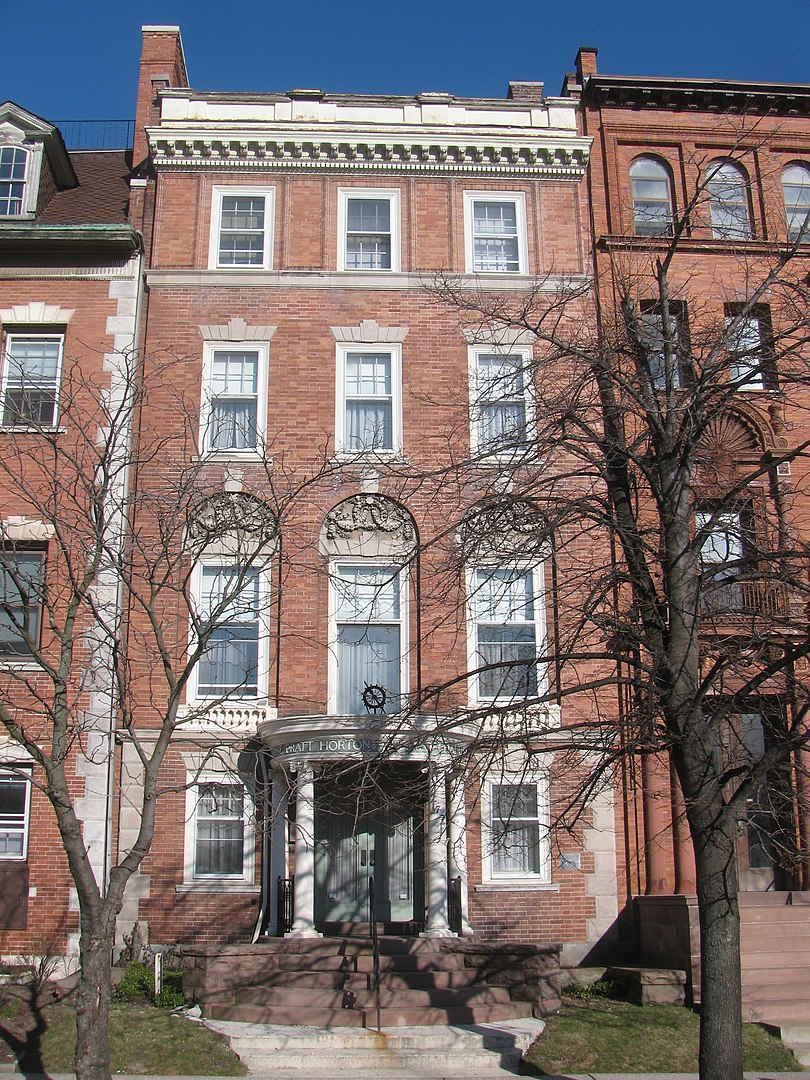 The Birge-Horton House is located within the Allentown Historic District of Buffalo, a neighborhood where mansions, four-story row houses, and social clubs demonstrated the wealth of the neighborhood's residents. The Birge-Horton home, a Georgia-Revival, four-row, brick townhouse was the last of thirteen luxury row houses built from 1893–1895. The home's residents -- owners and tenants alike -- were each an important part of early Buffalo history. However, the property's second owner, Katharine Pratt Horton, is remembered today as the most influential resident of the property. Horton actively participated in the Daughter of the Revolution for Buffalo and then donated the home to the foundation upon her death. The organization remains in the house and goes by the name: "Katherine Pratt Horton Buffalo Chapter, National Society Daughters of the American Revolution."

During the late nineteenth century, Buffalo not only emerged as a major city -- ranking eighth in the country by the turn of the century, but supported a multitude of millionaires, many of whom lived on Delaware Avenue. Indeed, just north of the Birge-Horton location exists a stretch of Delaware Street known as "Millionaire's Row." The Birge-Horton property appeared in a spot called "The Midway Plaisance" (or "The Midway) where thirteen luxury row houses arose -- the Birge/Horton stands as the last one constructed.

Though Buffalo offered plenty of housing to its residents by the late nineteenth century, investors speculated that wealthy residents from the East Coast, who often lived in row houses, would seek similar dwellings in Buffalo. All thirteen homes enjoyed a unique design, mainly built by separate architects and builders, but carry enough similarity to appear as if designed as one project. The Birge-Horton House was designed by the acclaimed Buffalo architects E. B. Green and W. S. Wicks for Henry and Fanny Birge. Mr. Birge operated as a partner in the Birge Wallpaper Co; however, records show that Fanny technically owned the house. The four-row, brick house enjoyed a grand staircase that rose four stories high, although each level enjoyed a novel design. The home also contained six marble fireplaces among its many luxurious features.

The Birges only resided in the home a few years before health issues forced Henry to retire. The couple moved to New York and divorced shortly before Henry died in 1904. Fanny never returned to Buffalo, but she retained the home until 1906. During the six years away from Buffalo, Fanny rented the house to prominent tenants. Peter Porter, an entrepreneur and politician, lived in the home from 1901 - 1903. During the late 1880s, he had introduced the legislation that spurred the development of the Niagara Falls power project that famously electrified Buffalo. His father died during the Civil War, and his great-grandfather gained fame during the War of 1812 (and he fought during the American Revolution, too).Mrs. Frances M. Wolcott and her son, Lyman M Bass, lived in the home from 1905 to 1904. They had tied to numerous prominent Buffalo citizens, including Grover Cleveland; her first husband's law firm represented him. Wolcott's second husband -- a business associate of her first husband -- served as a U.S. Senator from Colorado. Wolcott arrived in Buffalo, though, without a husband. Instead, she appeared to live as a socialite who routinely hosted and attended parties and events in Buffalo and European cities.

Katherine Pratt Horton moved into the home in 1906 and rented it for 14 years before finally purchasing it from Fanny Binge in 1924. She stayed in the home until she died in 1931. Before her and during her time in the Birge-Horton house, Horton actively participated in civic, social, and political events, led (and often founded) several local and national societies, notably the Daughters of the American Revolution (Horton founded the local chapter in 1892). She also served on the Women's Board of Managers at the 1901 Pan-American Exposition. She also represented Buffalo at the 1902 Charleston Exposition, the 1904 St. Louis World's Fair, and the 1914 Panama-Pacific Exposition. Additionally, she was a delegate to the International Peace Arbitration Congress in Europe.

When Horton died in 1931, she bequeathed the home and all its furnishings to the Daughters of the American Revolution, the club for which she expressed the most passion. She left $20,000 to the society to maintain the historic house and use it as the club's headquarters. Thus, the chapter became the third (and still current) owner of the home and subsequently renamed it the Katharine Pratt Horton Buffalo Chapter of the Daughters of the American Revolution.