The Washington County Chapter of the Daughters of Utah Pioneers (DUP) established a museum in St. George in a building donated by Hortense McQuarrie Odlum. Mrs. Odlum was the granddaughter of one of the early mayors of St. George. The building was constructed in 1938, financed by Mrs. Odlum. A cousin of Mrs. Odlum, Ferol McQuarrie Kincaid Moore, funded the building of an addition in 1985. Portraits and bios of both women hang in the museum. The museum also is known as the "Pioneer Museum in St. George" and its mission is to tell the stories of the Mormons who came to settle the Utah Territory in the 1850s under Brigham Young. The museum contains the history of over 2,000 pioneers and the photographs of more than 500.

This historic courthouse was constructed in stages from 1866 to 1876 and served for over eighty years before the county's government moved to a new facility in1960. The building was owned by the county and used for county offices and a community information center when the building was documented for listing in the National Register in 1970. Public meetings have been held in the old courthouse, too. The Daughters of Utah Pioneers (DUP) - along with the Sons of Utah Pioneers, Arts to Zion, and Washington County Historical Society - have arranged with the City of St. George to have the old courthouse building opened for displays, tours, and special events. Each of the four organizations has a display room in the building. Next door to the Old Washington County Courthouse stands the DUP McQuarrie Memorial Museum.

The Thomas Judd Store at 62 West Tabernacle Street is the oldest surviving family-run business in St. George, having begun in 1911. The store building was constructed even earlier, sometime in the late 1800s. Thomas Judd Sr. operated a general store from the building and the store has been owned by four different families in its 109 years. Thomas Judd's Store is still open, in the block known as the Green Gate Village complex. The home of Thomas Judd Sr. (another Clio entry) also was moved to this complex to save it from destruction, and is located to the rear of the Thomas Judd Store. Homes associated with other pioneers - William Bentley and Orson Pratt - also have been saved and moved to Green Gate. A link to a walking tour brochure of the block appears below.

The Thomas Judd House was built around 1875 and used to stand in the 200 block of S. 200 East St. in St. George. The one-and-a-half story house is constructed of adobe with plaster sheathing scored to resemble stones. The house was disassembled and moved to a vacant lot in 1986 to save it from destruction before the block was redeveloped. The house was reassembled in 1991 on a property in St. George called Green Gate Village that already contained other Judd family early twentieth century. The Green Gate Village complex fronts onto both Tabernacle Street and 100 West; the Thomas Judd House was placed to the rear of the Thomas Judd Store building (62 Tabernacle, also a Clio entry), near the northeast corner of the complex. The Thomas Judd House was listed in the National Register of Historic Places in 1978, when it was still in its original location. It has become Green Hedge Manor, an inn.

The St. George Tabernacle, on the corner of Main and Tabernacle Streets, was built by the Church of Jesus Christ of Latter-Day Saints (the Mormons). Construction began in 1863 and was finished in 1876. The basement was used for small gatherings as early as 1869. The first public meeting held in the basement was on March 20th 1869. Sandstone was quarried near the edge of town and wood was cut at nearby Pine Valley. The building has been used in recent years for religious and community gatherings. The St. George Tabernacle closed temporarily in 2020 due to the pandemic but typically offers missionary-guided tours of the building. Exhibits include ornamentation of the building and artifacts used in its construction. The building was listed in the National Register of Historic Places in 1971. 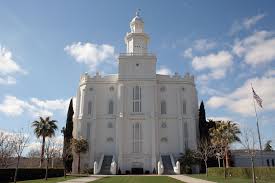 The St. George was the first temple completed in Utah after The Church of Jesus Christ of Latter-day Saints settled in the Salt Lake Valley and the first operational temple for the church since it was forced from its city of Nauvoo, Illinois in 1846. Dedicated in 1877, Brigham Young died shortly after returning to Salt Lake City. One of the most important events to occur in the temple occurred when Wilford Woodruff was acting at the temple's president (and later would be called to the church's president), he had a vision of the Founding Fathers, Christopher Columbus, William Tyndale, Martin Luther and others both men and women. All these individuals told Woodruff about their work in helping in the establishment of America with freedom of religion which allowed for the Restoration of the Gospel in its entirety. Then they asked why their proxy work had not been done and encouraged Woodruff to get them done (i.e. baptism and endowment). Woodruff and the men with him went to work right away for a number of days to complete this divine assignment. A visitor center is available for the general public and is located at 490 South 300 East.