The museum opened in the Central Fire Station in 1982, 100 years after it was built. 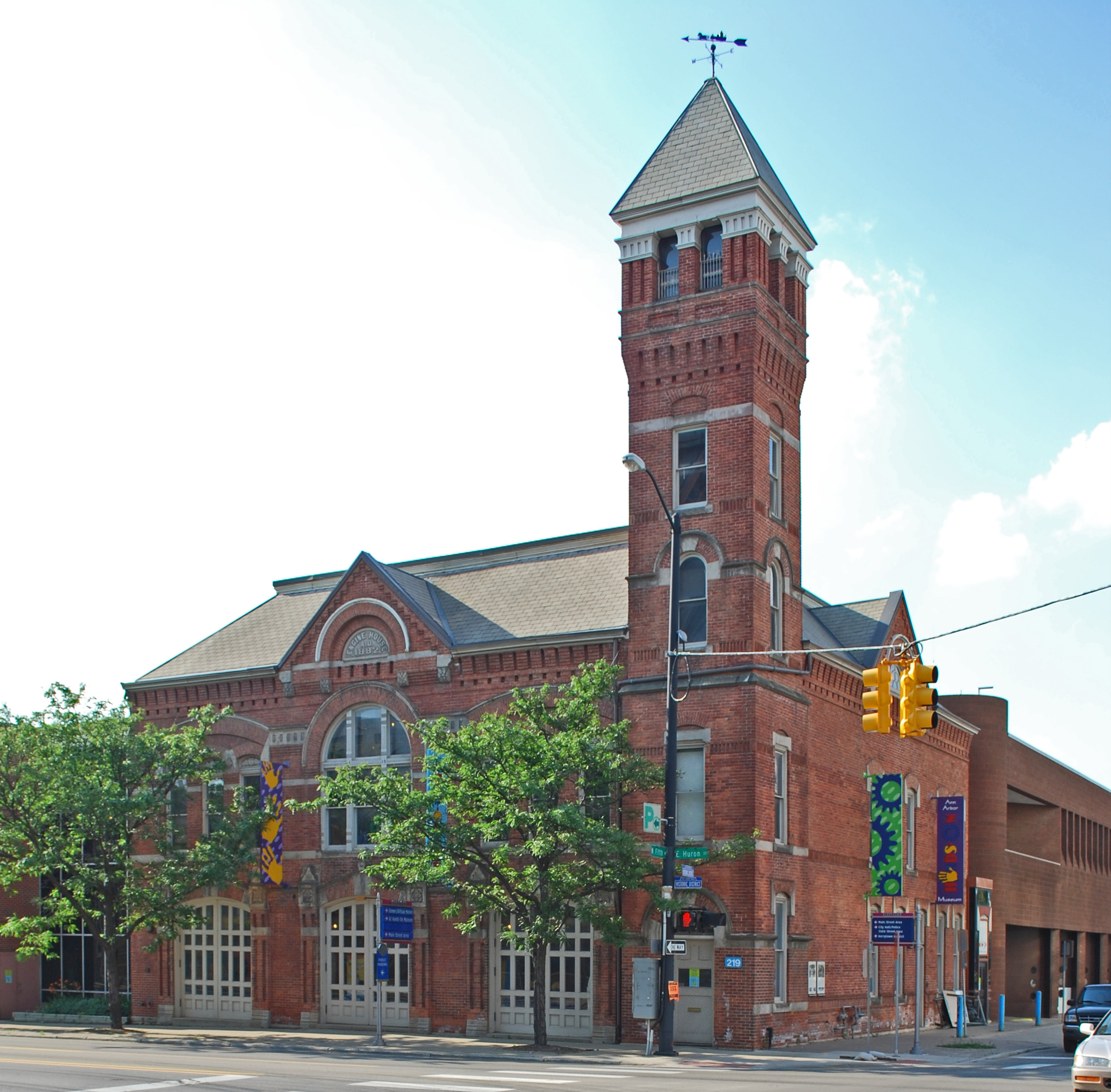 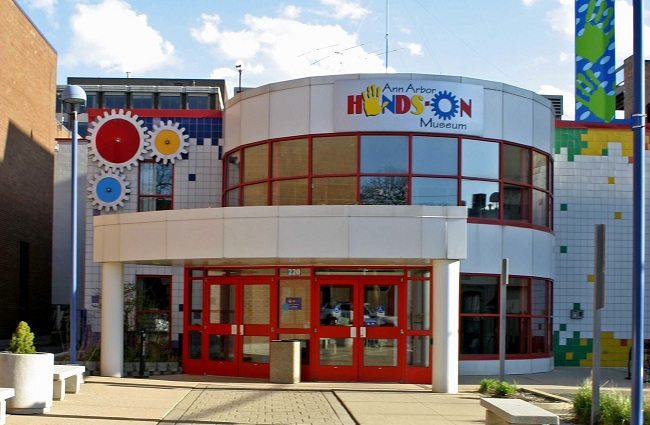 The H2Oh! exhibit is wildly popular at the museum 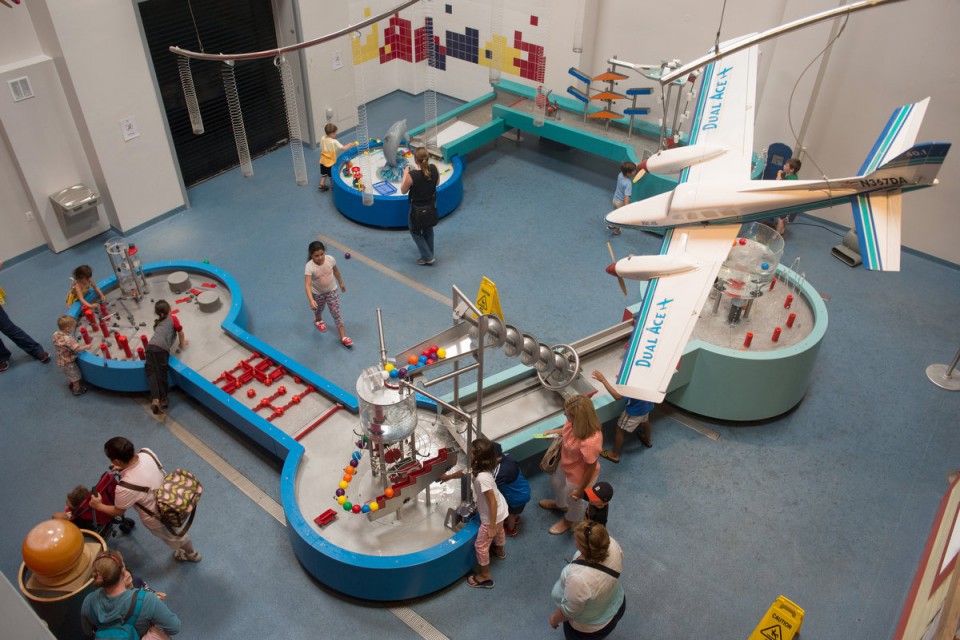 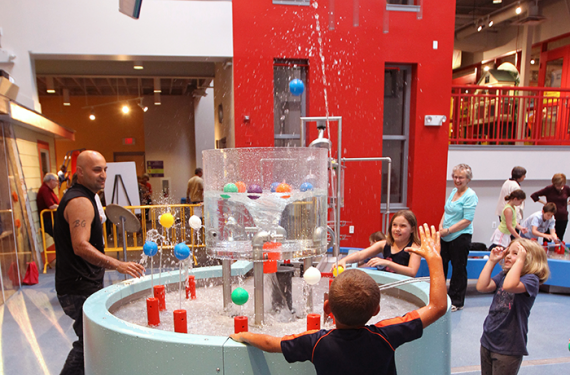 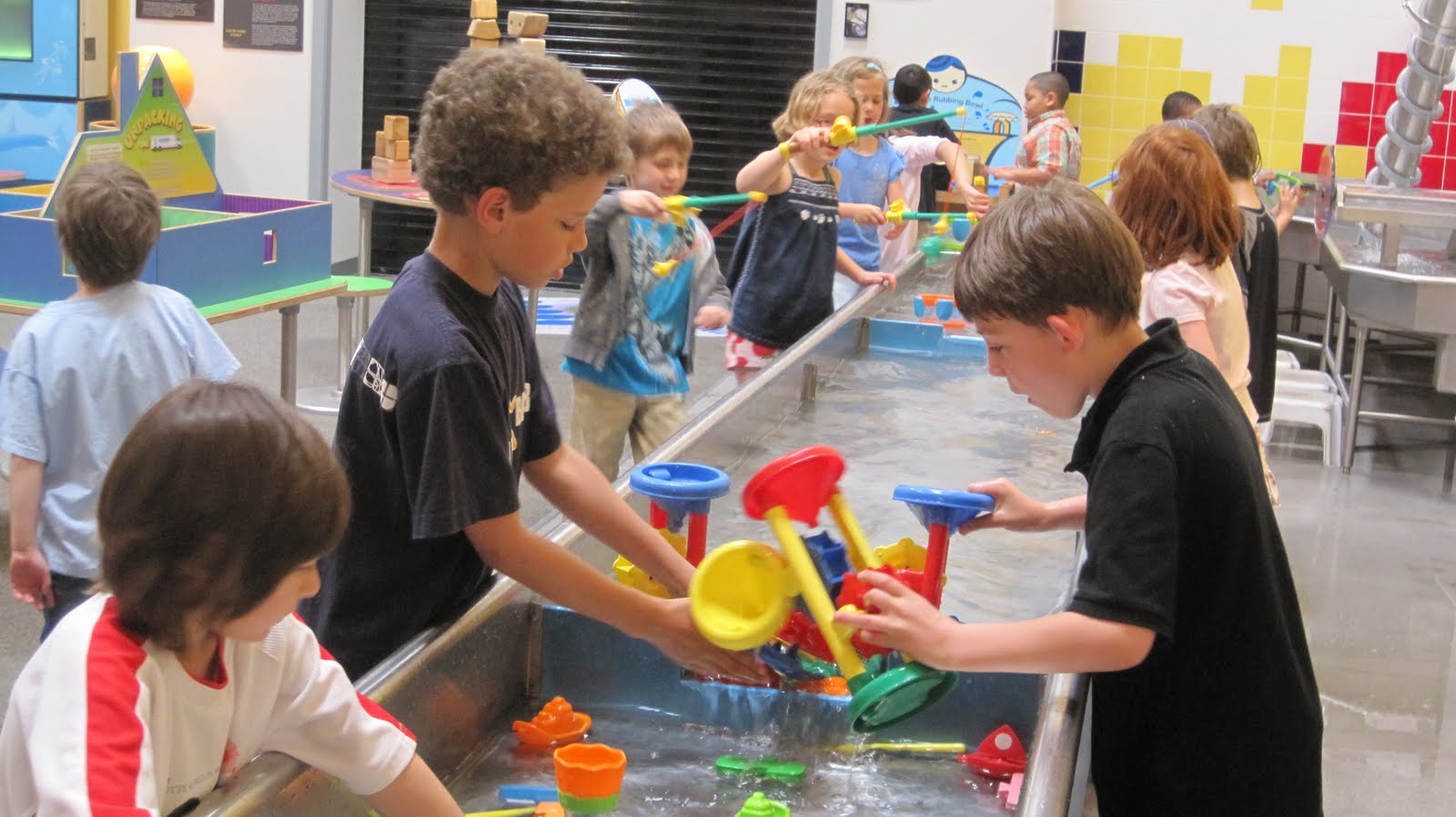 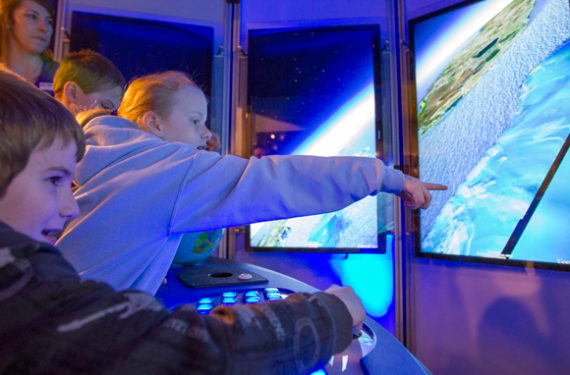 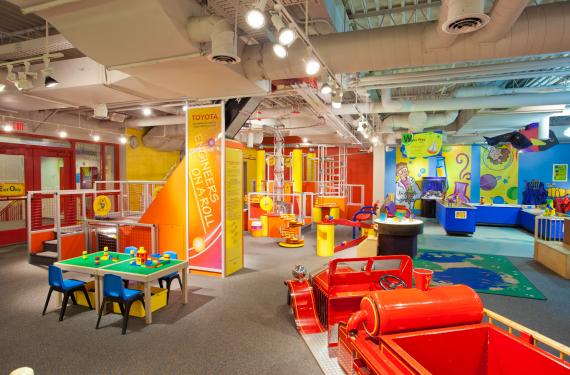 Kids work on the light tables 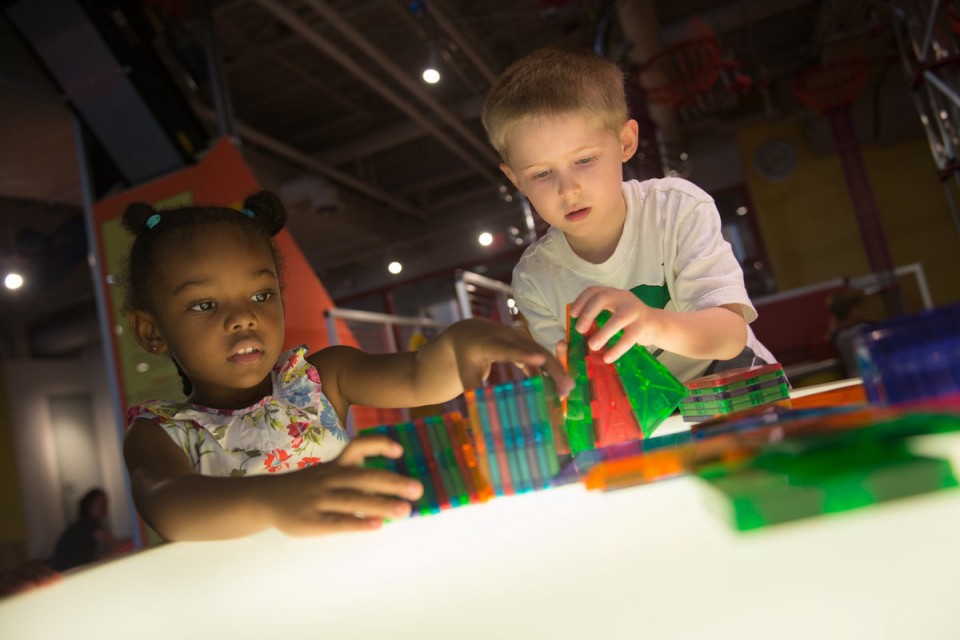 The Legacy Gallery features an exhibit on how the internet works 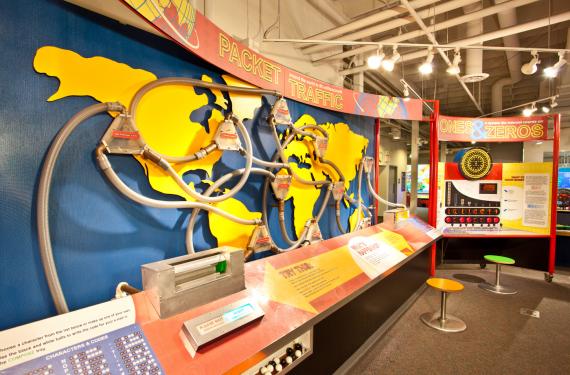 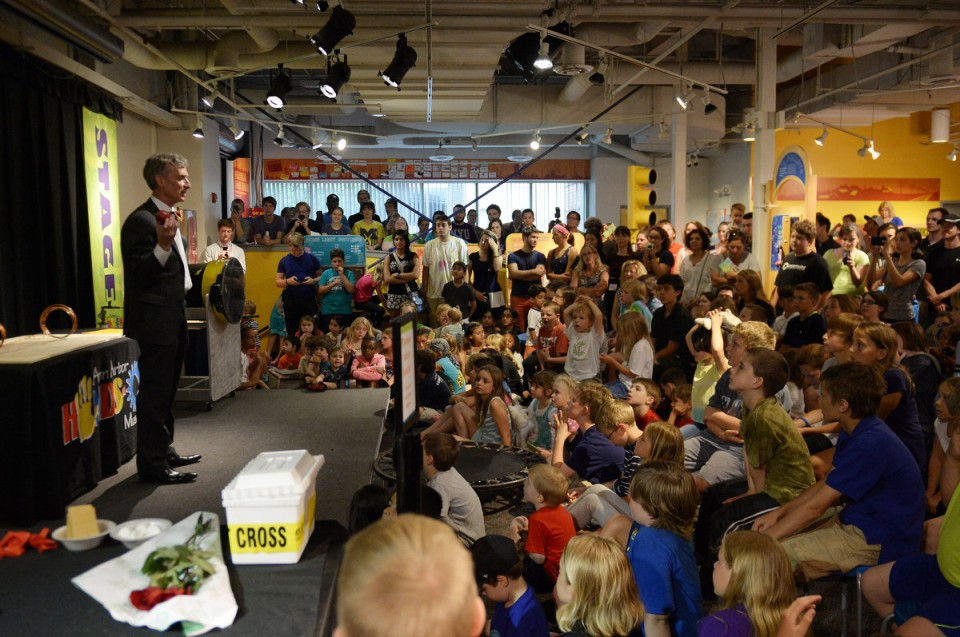 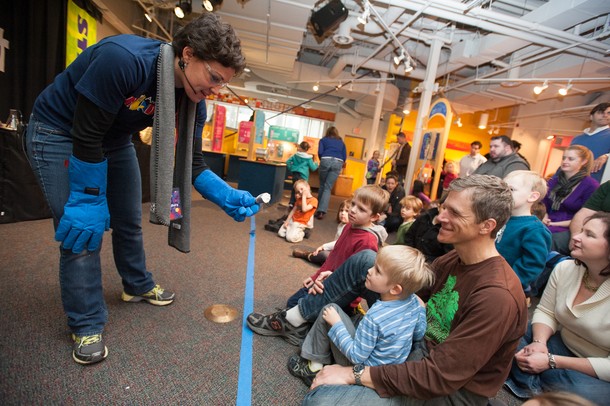 A substantial problem for growing cities during the late nineteenth century involved fires, notably because of the abundance of wood-framed construction and the coinciding lack of fire safety. As such, cities throughout the nation began to form firefighting systems. For Ann Arbor, the process started with calls and alarms that spurred residents to come together and fight the fire. Eventually, a firehouse emerged, though it still required volunteers to meet at the station before setting out to fight the fires. The Central Fire Station, which now serves the Hands-On Museum, arose in 1882. It stands as a reminder of a time when Ann Arbor demonstrated its move from a frontier-minded town to a mature urban center. Structured fire departments were necessary for protection and show potential industrialists that a city was worthy of investment.

One of the earliest approaches to collective fire fighting in Ann Arbor involved a system that required citizens to respond to the threat of a blaze by shouting "fire!." Later, more sophisticated efforts led to the founding of regular volunteer firefighting companies. At the sounding of the fire bell, Ann-Arborites and University of Michigan students located in various locations throughout the city left their classes, workplaces or homes and raced to the firehouse. They towed by hand the equipment -- hoses, hooks and ladders, and pumps -- to the threatened buildings in an attempt to fight the fire (primarily to keep it from spreading to other parts of the city).

As Ann Arbor grew, however, the volunteer system slowly evolved into a professional approach. In fact, the Central Fire Station serves as a mark of that transition because the 1880s proved to be the last decade for volunteers to handle the bulk of the city's firefighting duties. The Central Fire Station stood much larger than what had existed in Ann Arbor before it opened in 1882. Its size allowed for modern equipment storage, steamers, coal bins, and ladder trucks. The firehouse also contained a kitchen and dining room on the first floor and bedrooms, offices, and bathrooms on the second floor, all of which demonstrated its ability to function as a semi-permanent home for trained firefighters.

In 1885, three years after the Central Fire Station opened, the city installed its first piped water network, which included 100 fire hydrants, and three years after that, in 1888, Ann Arbor hired its first full-time firefighters. The station, water system, and firefighters all pointed to a city maturing. The growing desire to establish a well-trained, permanent firefighting force speaks to cities' attempts to grow by drawing investors and entrepreneurs to their respective urban centers. Without proper fire protection, a town would simply be a risky place to establish a commercial operation, notably during the booming industry boom of the late nineteenth century. And, with the University of Michigan growing, too, Ann Arbor had numerous reasons to create a fire department. Lastly, the university expansion and increased commercial interests also included expanded populations and housing, meaning more fire risk and a greater need to control them.

The fire department moved out of the building in 1978, leaving it vacant; the museum moved into the facility in 1982, 100 years after the fire station opened.

AAHOM’s mission is “to inspire people to discover the wonder of science, technology, engineering, art, and math” and its vision is “to be the leader in imaginative and interactive learning experiences.” The museum employs almost 60 staff members and over 400 volunteers.1 AAHOM’s membership includes 7,700 families. Around 57% of its visitors are from outside of the county where it is located, making it a regional destination. In AAHOM’s 2015 Financial Report, it reported a $2.67 million operating budget.

AAHOM’s has 250 exhibits over four full floors. The first floor concourse includes some of the most popular exhibits, such as the Water Gallery, Building in a Building, Explore Your World, and Block Party. The Preschool Gallery is specially designed for the youngest visitors, age four and under, and includes a dress-up space, water tables, and a child-size fire engine. The Legacy Gallery demonstrates basic mechanics all the way up to advanced technology. All About You explores the human body and healthy lifestyles. Visitors can learn about the biology and geology of the Great Lakes region in the Michigan Nature Gallery.

Educational programs and outreach events are integral to the museum’s mission. AAHOM offers school classroom and auditorium workshops, as well as summer camps, scout programs, and birthday party activities. The museum provides reduced admission to low-income schools and videoconferencing activities around the world through its Distance Learning programs. Family Fun Nights showcase a variety of science and math activities that are intended to engage all members of the family. The ScienceWorks programs offer labs on topics like music, physics, water, and fossils for ages three to fourteen. The Kids in the Kitchen program aims to teach children healthy eating habits. The museum has also recently began creating popular adult-only events such as Pint at the Museum and a 3-D printing design workshop