The Milwaukee Road Passenger Depot in Green Bay, Wisconsin opened to passengers in 1898 on a branch line operated by the Chicago, Milwaukee, St. Paul and Pacific Railroad (locally known as The Milwaukee Road). The depot and branch line served residential neighborhoods and the Green Bay central business district both in terms of passengers and materials, helping it grow. While two other depots competed with the Milwaukee Road, it was the only one that operated on the east bank of the Fox River.

2012 photo of the Milwaukee Road Depot in Green Bay, Wisconsin was built in 1898 in Flemish Renaissance Revival style. 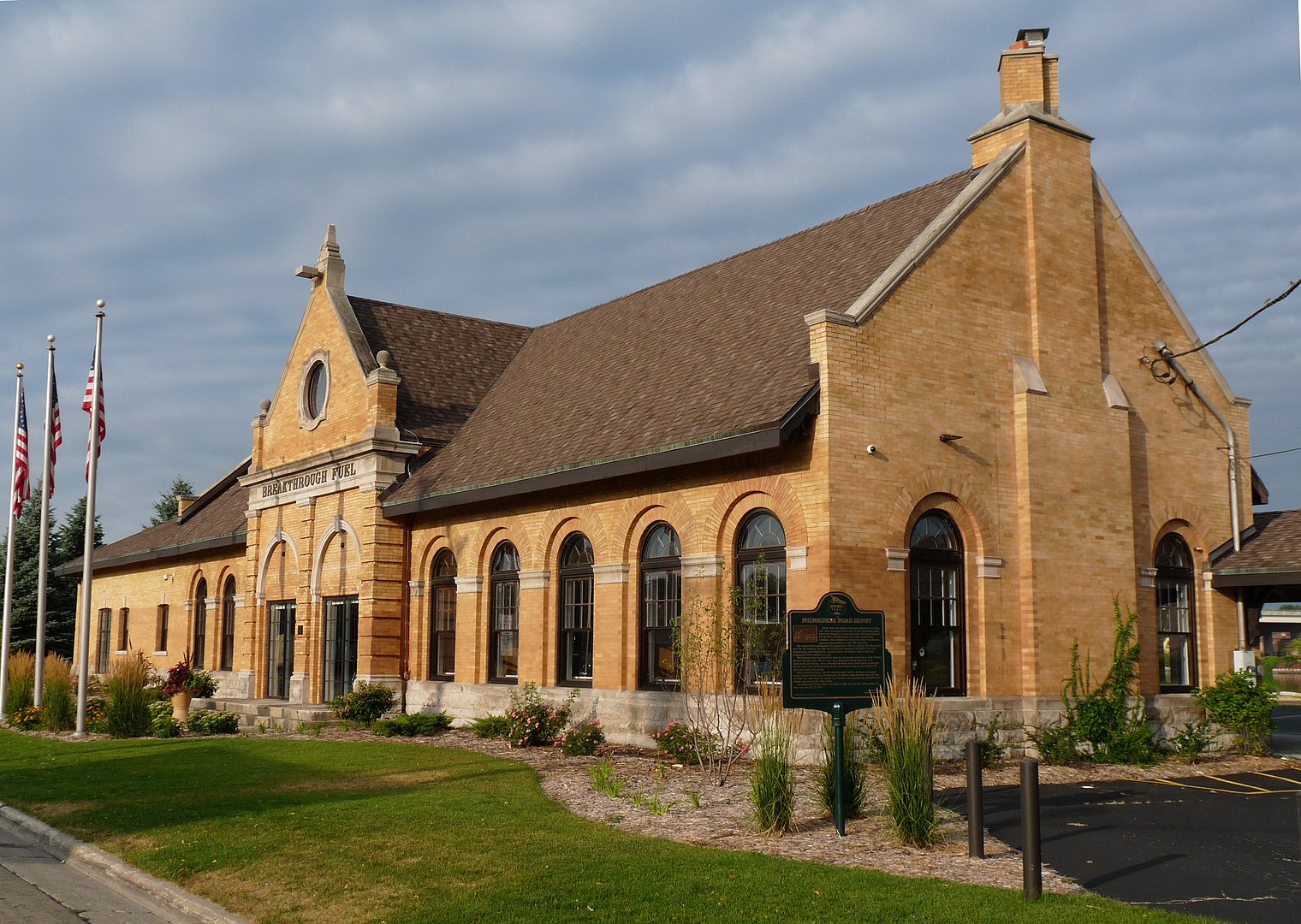 The Flemish Renaissance Revival designed Milwaukee Road Passenger Depot opened its doors in 1898 and served as an integral part of Green Bay's early transportation and commercial development. The railway arrived years earlier, in 1873, and operated for nearly sixty years, mainly for the Chicago, Milwaukee, St. Paul & Pacific Railroad (also known as the Milwaukee Road, in Green Bay), but also as the city's only passenger service on the Fox River's east side.

Although Milwaukee Road was not the area's first rail transport, the other two nearby rail systems (the Chicago & Northwestern and the Green Bay & Lake Pepin -- later the Green Bay & Western -- operated on the west side of the Fox River. Until 1895, the area west of the river -- had not yet become part of Green Bay; it was a town called Fort Howard.

The Milwaukee & Northern had been chartered in 1870 and authorized by the state legislature to construct and operate a railroad connecting Milwaukee to the Green Bay area (the largest city north of Milwaukee) and onto Lake Superior. Though it took some time to complete a bridge over the river because of the soft, marshy ground, lines running into Green Bay arrived by the 1870s and ran north of Green Bay (after the bridge completion) by the early 1880s. In 1889, the railway laid a branch line -- known as The Alley Track -- that extended to the central Green Bay commercial and industrial district, which significantly boosted the area's commercial growth. Indeed, the Milwaukee Road (and its Alley Track) was the only railway of Green Bay's three extensive railways to provide any rail facilities to the east-side urban area.

The much larger Chicago, Milwaukee & St. Paul Railway, which started its operation in 1851, purchased the Milwaukee & Northern in 1893. Five years later, in 1898, construction began on the now-historic Milwaukee Road Passenger Depot. Evidence points to Charles S. Frost as the architect. Born in Maine in 1856, Frost studied at M.I.T. and worked for firms that designed buildings in Chicago and throughout the Midwest during the early 1880s. By 1889, as an independent architect, he began to specialize in designing railway depots. He created the Milwaukee Road Passenger Depot in the Flemish Renaissance Revival style, a subset of the broader Renaissance Revival style. The depot served passengers from 1898 to 1938, and then after a hiatus, from 1945 to 1957.

In 1957, the Green Bay Association of Commerce (renamed the Green Bay Area Chamber of Commerce in 1966) took over the building and then purchased it outright in 1986. In 2011, Breakthrough Fuel, a green-based company, renovated the station to use it as its corporate headquarters; the company received the Green Bay Beautification Award for its renovation efforts. The building survives today as a visible indicator of the critical role that the Milwaukee Road played in the development of Green Bay's historic central business district. And, for Green Bay, the passenger depot stood as a sign of a town that had matured and could compete with other Midwestern urban centers -- the Milwaukee Road Passenger Depot provided Green Bay residents with a sense of civic pride.