This Queen Anne-style commercial block, featuring distinctive polygonal bays in the second story, was erected in 1896 by James Triggs. In 1897, the Libertyville Hotel opened, hoping to draw summer visitors from Chicago. The hotel featured a dining room and an adjacent stable. Food and transport would be repeating themes for future building occupants. By the 1920s, the building had been divided into first-floor retail, with multiple storefronts, and second-floor apartments. A Ford agency and auto repair shop operated here through the 1920s, alongside a bank and real estate agency. In the 1930s and 40s, it housed a beauty shop and ice cream shop. Proctor's Chatter Box, a soda fountain and cafe, was a popular teen hangout in the 1950s in the north half of the building. By the late 1970s, it reprised an earlier role, as an auto parts store. Over the past 20 years, the building has ensured local residents have been well supplied with ice cream, baked goods, and coffee. 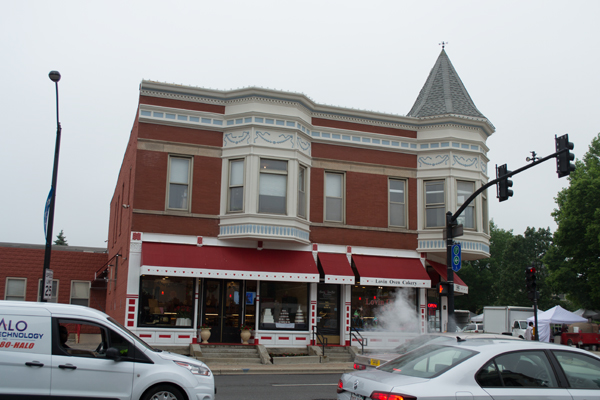 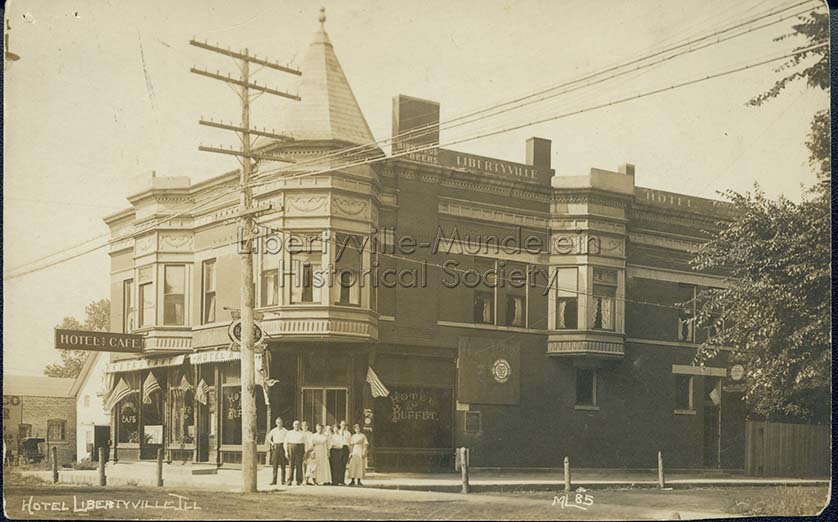 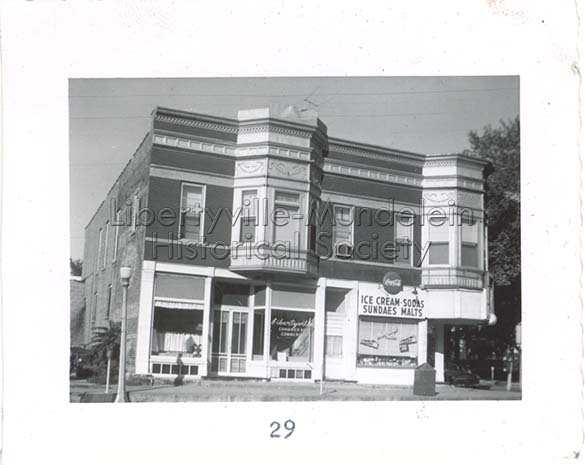 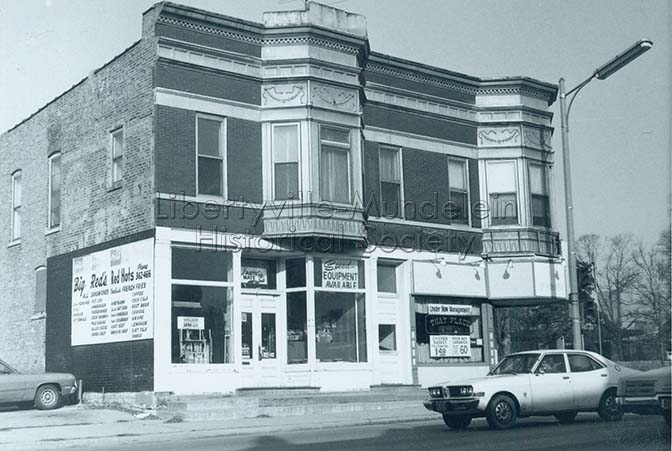 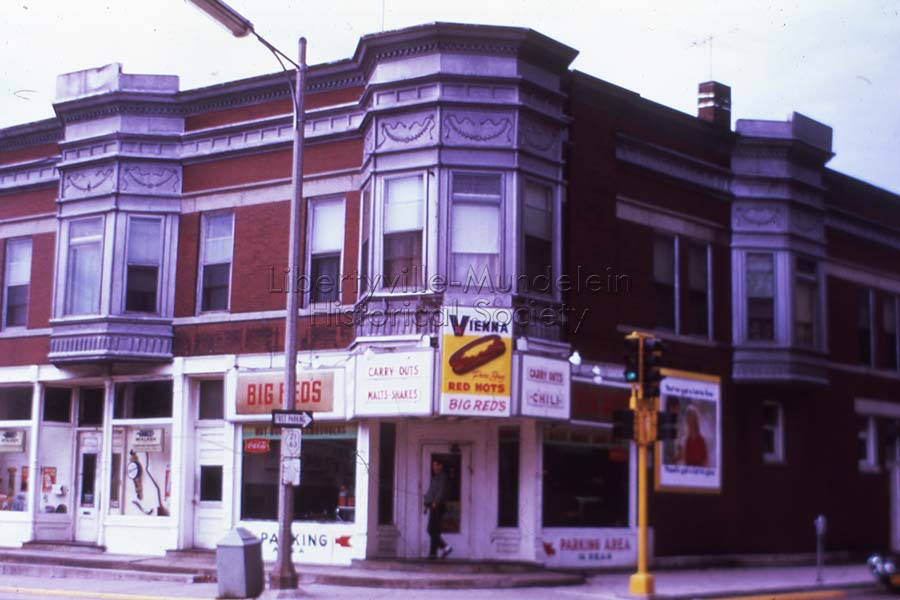 James Triggs (1842-1927) was part of a large family connection who had come to Lake County from England in the mid-1800s. He and various cousins and siblings numbered among the prominent merchants of Libertyville in the late 19th century. In the wake of the 1895 Libertyville Fire on the east side of Milwaukee Avenue, downtown was developed (and redeveloped) quickly. James Triggs put up this red-brick building in 1896, and by summer 1897 the Libertvyille Hotel opened for business.

The new hotel had "fifteen large bedrooms and a parlor on the second floor," with a saloon and dining room on the first floor, featuring an ice box and cigar case and "being lighted with electricity." It catered to summer guests, offering conveyances in the adjacent stable to those who wished to tour nearby lakes and providing a place to drink the famed local mineral spring water. Over the course of the 20+ years the building served as a hotel, it was remodeled several times, notably in 1902 to add "baths, closets, and lavatories." It also went through a number of different proprietors, including Frank Thomas Hiddleson and his mother Clara Belle Stone Hiddleson Scott, by the mid 1910s.

By 1919, it has ceased operation as a hotel and was now referred to as "the Kennedy building." Garrett Wilson and Carl Ohm, who owned Ford and Lincoln agencies in Lake County, opened a location here, featuring car sales, a service station, auto supplies, and tires. The Kennedy Brothers (Edward and Frank) took over the agency by 1924, and then by 1927 it was operated by J. M. McKitrick, through 1933.

In 1925 the new Libertyville Trust & Savings Bank opened here alongside the Ford agency. These were always intended temporary quarters for the bank, which moved to the Public Service building across the street upon its completion in 1928. A realtor, R. G. Kaping, moved in when the bank vacated, selling real estate and insurance here until 1931.

From 1932 to 1948, Harriet Beauty Supply was on the south side of the building. The salon, run by Harriet Matthews, specialized in the permanent wave style of the time; it also offered "electro-vac" treatments for "skin and scalp."

By 1940, the northeast corner of the building also housed an ice cream shop and cafe, which would remain there into the 1970s. The proprietors changed through the decade (Young's, Dairy Maide, Sunshine's). In 1948, Sunshine Monroe sold the store to Mr. and Mrs. Russell Proctor, who renamed it Proctor's Chatterbox. The Proctors redecorated, adding modern lunch tables, and with the backing of building owner Edward Sawusch, enlarged the space, removing the rear partition to increase seating capacity to 80. Proctor's became a favorite teen hangout: "It's jukebox had all the latest hits to accompany the thick malteds at fifteen cents and the huge banana splits that went for twenty-five cents," according to the memories of Bud and Donald Boyd. The restaurant also served plate lunches, steaks, chops, hamburgers and sandwiches, and was open daily until "mid-nite."

In 1950, the Libertyville Chamber of Commerce, which had been founded in 1946 but already had over 130 members, relocated its office to the south half of the building, remaining at least through 1959.

Lake County Auto Parts inhabited part of the building from at least 1967 to 1977. That Place on the Corner was one of several in a series of restaurants on the southwest corner of Milwaukee Avenue and Church Street. Other restaurants in the 1960s and 1970s included Jochims Coffee Shop, Brunner’s, Little Louie’s No. 3, Big Red’s, and Economos Spiros. APS Auto Parts, run by the Martins family, operated here into the 1990s.

A 1995 interior and exterior renovation restored the corner turret which had been removed sometime before the mid-1950s.

The Coldwell Banker real estate firm and Summit Ice Cream utilized the building during most of the 2000s. In 2009, the Round Lake Beach-based Lovin' Oven Cakery launched its first branch location in both halves of the building; they closed in 2019. The next year, Conscious Cup opened its fourth coffee shop here.

Boyd, Murrell "Bud" and Donald L. "Growing Up In Libertyville in the Thirties and Forties, A Stroll Around Downtown, Part II." 2004. Accessed July 31st 2020. http://vitacollections.ca/cmpldnewsindex/300/exhibit/4.