The single-story brick building that encompasses 400-404 North Milwaukee Ave was built fairly recently on the lot at the northeast corner of Church St. and Milwaukee Ave. Surprisingly, despite it’s seemingly prime downtown location, the property sat empty for many years. A frame building was removed from the site in 1909, and in the 1940s it had been landscaped and was used for an honor roll for military servicemen before the current building was constructed in 1956. The new building provided two storefronts first occupied by Julian’s Menswear and Jays Shoes, Inc. Successive businesses included Fenwick Shoes, Magic Touch Cleaners, and Murphy’s Health Foods and Juice Bar. 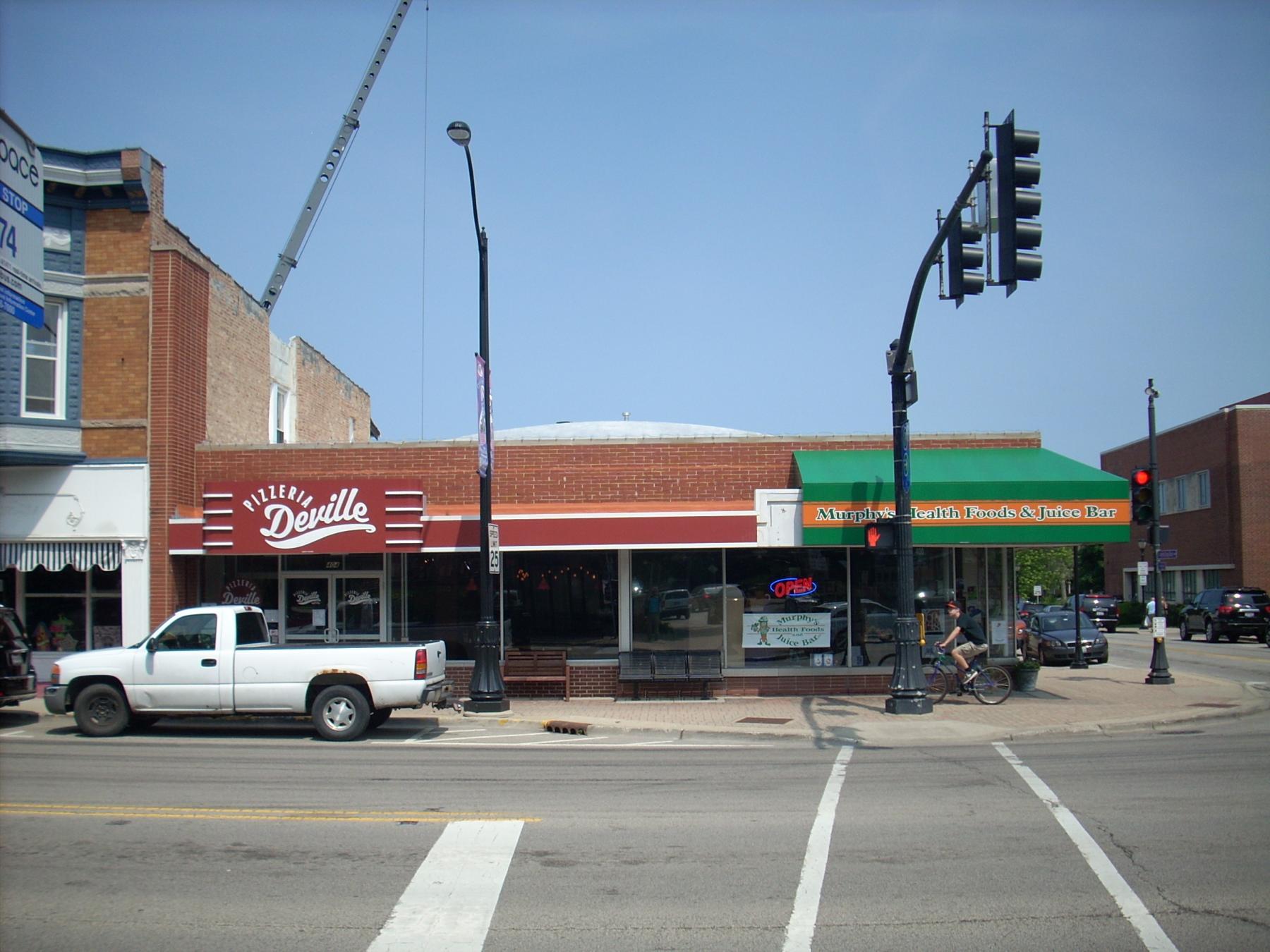 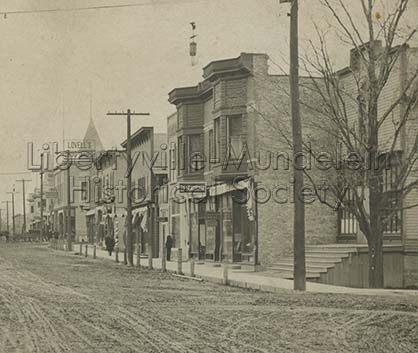 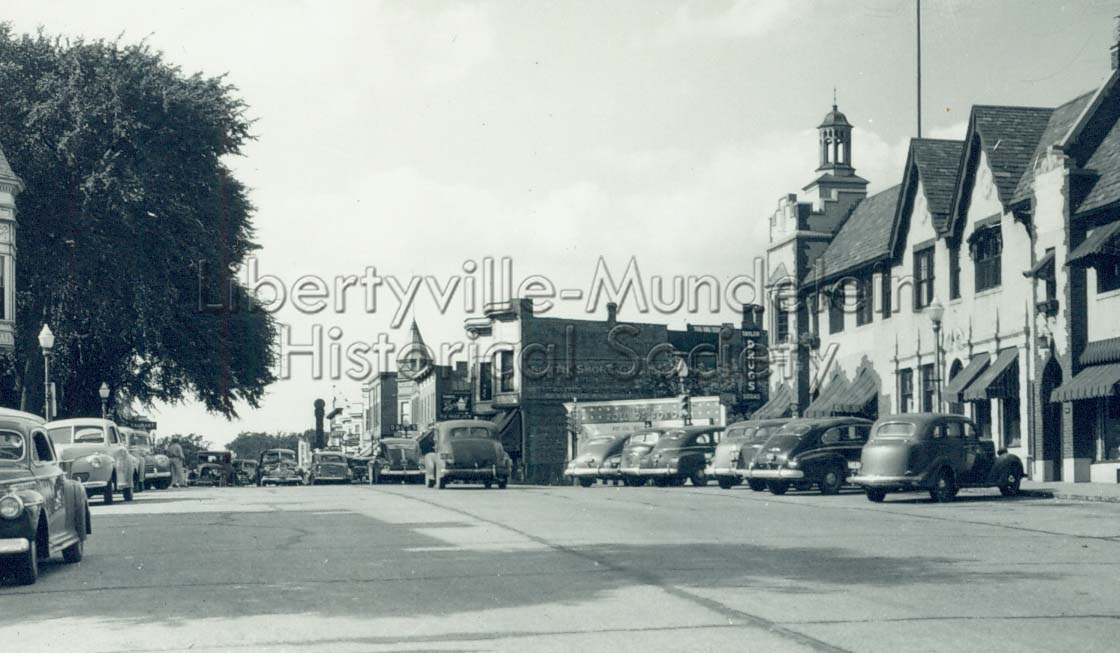 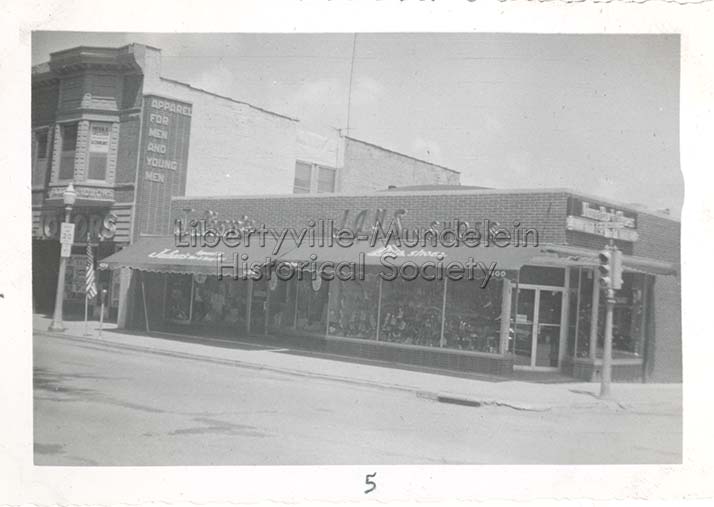 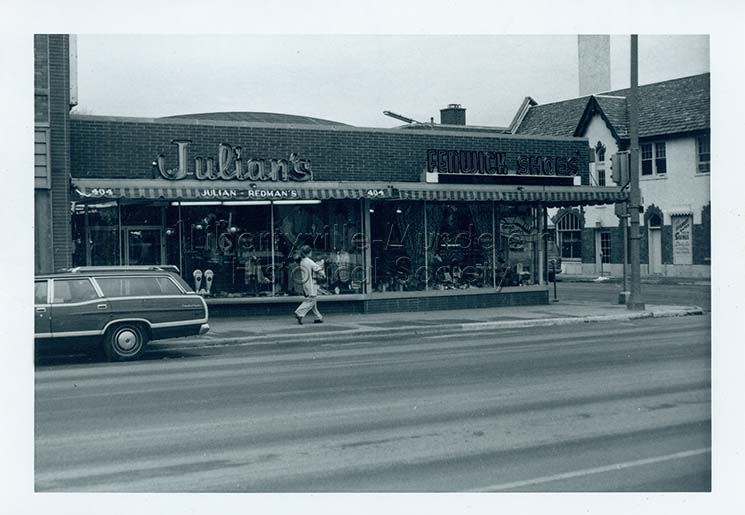 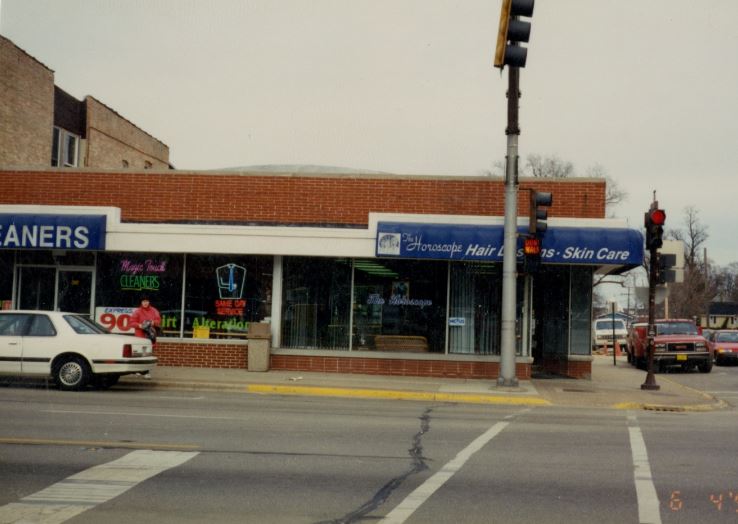 A building and millinery business at 400-404 N. Milwaukee Ave (although there were no official street numbers yet) was purchased by Henry S. Hurlbutt from M. H. Seavy in 1882. Hurlbutt’s wife, Caroline Hurlbutt, succeeded Mrs. M. H. Seavy in the millinery business, successfully running it for 26 years until her retirement in 1908. The two-story frame structure was built circa 1875 had an elevated entrance and wide porch reached by a broad flight of stairs. In 1909 the building was moved by the Hurlbutts around the corner and further east on Church Street (at the time, Orchard Street). According to an article in the Lake County Independent newspaper, Henry Hurlbutt considered the building “too antiquated for a modern business house” and yet “too good for wrecking.” However, the new development he expected for the now building-free corner did not happen for several decades, long after Hurlbutt passed away in 1921.

There were a few attempts at improvement, but none came to fruition. In 1923 the Masonic Temple Association, formed to pursue building a temple for Libertyville Masonic Lodge No. 492, A. F. & A. M., acquired the property from Caroline Hurlbutt with the intention of erecting a three story brick and stone building. However, the land changed hands again in 1929 when it was one of several lots in the 400 block of N. Milwaukee Ave purchased by a syndicate of business men with plans to redesign and redevelop the area. But the plans were never realized. In the 1940s, the lot was simply used as a garden area and held an honor roll for servicemen from Libertyville. Finally in 1956 a new building designed by architect Henry Tideman and built by Hansen and Werhane, was constructed. It featured two storefronts, 400 and 404 N. Milwaukee Ave.

Julian’s Menswear, the first occupant at 404 N. Milwaukee Ave, opened on October 4, 1956 with an official ribbon cutting ceremony. Owner Julian Flegelman was a veteran in the clothing business, having previously had stores in Waukegan and Milwaukee. The new store offered casual shopping and low pressure sales, a new trend at the time, and offered a boy’s department as well as menswear. “A stylish informality prevails at Libertyville’s newest men’s store,” the Independent Register newspaper declared. In 1968 Redman’s, a well-respected Chicago firm specializing in suits and tailored clothing, had joined the operation and the name on the store became Julian-Redman’s. The Redman's store operated at the location for several decades before moving, and had a presence in Libertyville until it closed in 1996, but it is unclear if Julian's was still associated with the business.

In 1991, the former Julian-Redman's storefont became Magic Touch Cleaners. Owner Sam Sohn, a Korean native, ran the full service dry cleaners and tailors until 2013. Pizzeria Deville opened in 2014 after a thorough renovation, including creating a large basement seating area. The restaurant, owned by former banker John Durning, fulfilled his dream of owning a local pizzeria. Featuring a wood-fired pizza oven Durning’s “American pizzeria” strives to follow the Neapolitan style of pizza making while using only fresh ingredients for all dishes. In 2020 the restaurant changed its name to Deville Pizza and Provisions offering a selection of gourmet grocery options from their website.

Jays Shoes, Inc. were the first tenants of 400 N. Milwaukee Ave, the corner store next to Julian’s, and opened in 1956 as well. It was a branch of a business owned by Irving Einhorn which already had stores in Chicago and Skokie. The new store would bring the same services and name brand shoes for men, women, and children, such as Red Cross, Penobscot, Stride Rite, Nurin-Bush, and Portage to Libertyville. At some point the store became part of the Giesche Shoe Store chain. The company was owned by the Giesche family and operated stores across Lake County, with the last two, in Glen Ellyn and Geneva, closing in 2014.

Fenwick Shoes was at 400 N. Milwaukee Ave by the late 1970s, and proudly carried Florsheim Shoes, as declared by a sign on the side of the building. Florsheim was another family with strong connections to Lake County—they owned Red Top Farm, the current site of a housing development and Red Top Plaza which holds the Jewel-Osco grocery and pharmacy. Baird & Warner realty offices briefly occupied the space after Fenwick shoes. In 1987 Margie Allen opened her shop, Horoscope Hair Design and Nail Salon, providing, in addition to hair styling and cutting, manicures, make-up services, and massage.

Murphy’s Health Foods and Juice Bar, with it’s now familiar green and orange awning on the corner, is the current occupant of the south side the building. The family-owned store was started by John and Lori Murphy in 1996. Focusing on healthy living through natural products, they carry herbal supplements, vitamins, and gluten free foods, although the big draw for many customers is the juice bar offering fresh, raw juices, smoothies and vegetarian lunch options.

Boyd, Murrell "Bud" and Donald L. Boyd. A Stroll Around Downtown Part III, Growing Up in Libertyville in the Thirties and Forties. Accessed August 23rd 2020. http://vitacollections.ca/cmpldnewsindex/300/exhibit/1.