A drug store has been in continuous operation on this same spot since the 1870s known variously as Kimball & Knight’s, F.Z. Kimball & Co., F.B. Lovell & Co., F.B. Lovell Company, and finally, Petranek’s. Although in business for almost 150 years on the same site, it currently occupies its third building, the two previous structures having been seriously damaged by fires. In 1898, the Lovell drug store became home to the first telephone company in Libertyville. The Lake County Telephone Company switchboard was located in the basement of the Lovell drug store and later in the rear of the store. When fire gutted Petranek’s Pharmacy in 1954, the shop moved to another Milwaukee Avenue storefront while the current building was constructed. When the new building opened its doors in the spring of 1956, it featured a restaurant and soda fountain, air-conditioning, indirect lighting, and oak paneling. In 1993 exterior architectural changes were made, including a stucco facade and peaked parapet wall, but many of the charming 1950s interior details remain. 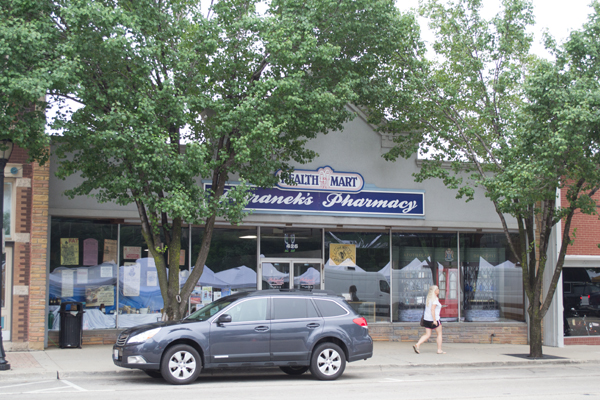 Looking north on Milwaukee Avenue, circa 1940. Lovell's Drug Store/Knight Building on the right. 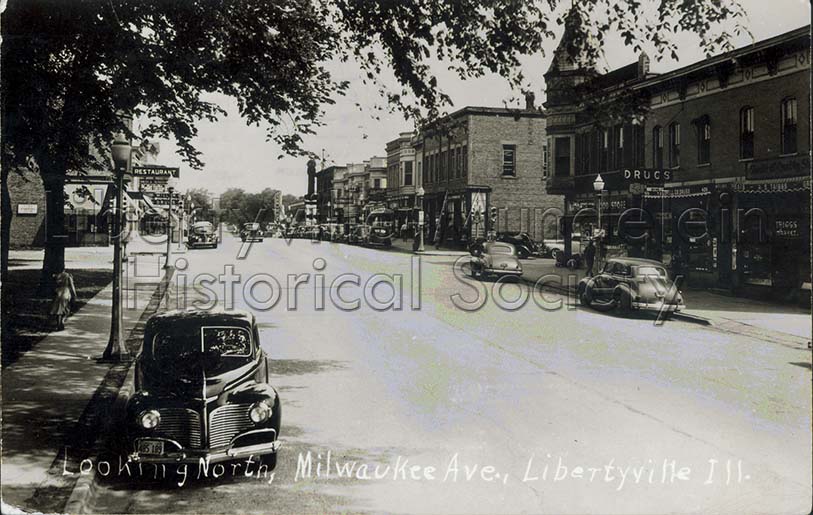 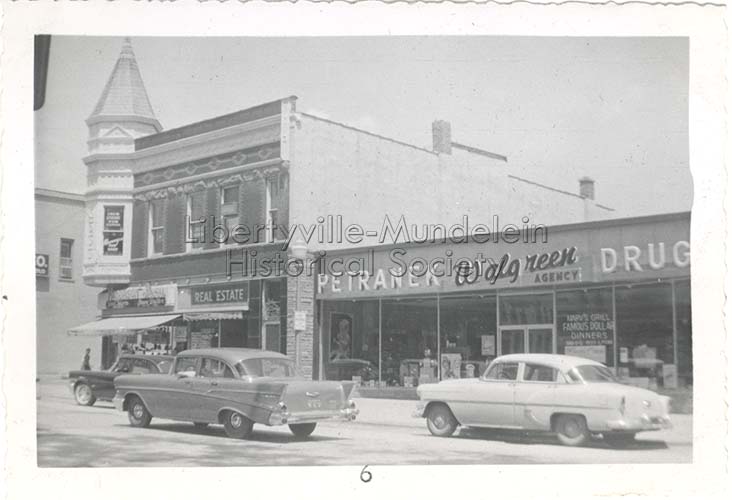 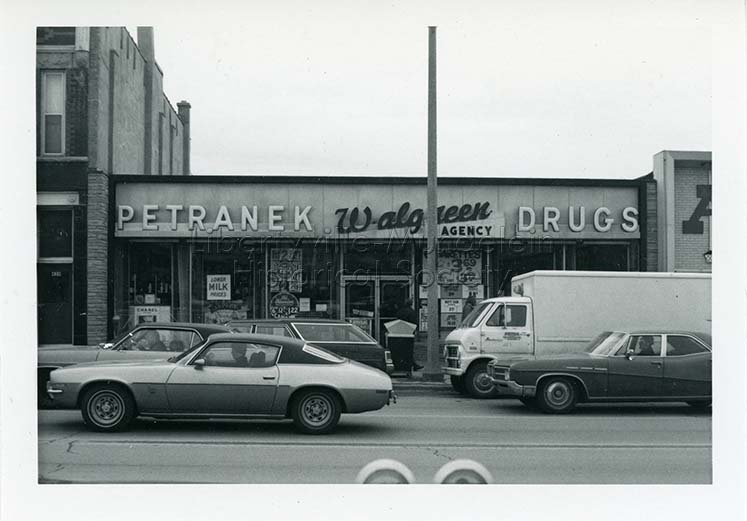 The original durg store was founded in 1872. The earliest confirmed owner, F.B. Kimball, bought a pharmacy business in 1876 and operated it out of a two-story building owned by his father-in-law, Lorenzo Stowell, near the corner of Milwaukee Avenue and Sprague (now Cook). After an 1880 fire destroyed that structure, Kimball purchased the lot from his father-in-law and construction began on a new building. By the time the building was completed in January 1882, Kimball had a partner – Dr. Fremont C. Knight, a native of New York who came to Libertyville in 1880 after graduating from the medical department of the University of Buffalo. The store was named Kimball & Knight’s. While Knight’s name would later be removed from the store’s name, he became the owner of the building in May 1882. The building became known as Knight’s Block.

By 1888, Frank Lovell assumed ownership of the drug store. F.B. Lovell and Co. was a typical drugstore of the era, filling prescriptions and selling an array of other goods such as “Ada’s Tutti-Frutti”, cigars, musical instruments, paint, stationary, and books. The pharmacy was described as “entirely metropolitan, the arrangement of the interior, of the shelvings and of the stock, all bespeaking the modern and the up-to-date.” (Lake County Independent September 25, 1903, p. 13)

Knight’s Block, a two-story, two-store brick building, survived the Libertyville Fire of 1895. Three years later, Lovell and Fletcher Clark established the first telephone line in Libertyville under the auspices of the Lake County Telephone Company. The switchboard was located in the basement of the Lovell drug store and later in the rear of the store. Mrs. Linna Corlett and Miss Effie Butterfield were a few of the first telephone operators. By 1903, the company serviced over 200 subscribers.

Frank Lovell passed away in late April 1910. Lovell’s widow, Augusta Lovell, and James Swan, assistant pharmacist, created a new company – the F.B. Lovell Company. James Swan helmed the business for the next thirty years. Frank J. Wenban, a pharmacist from Lake Forest purchased the business at the end of March 1940 and kept the F.B. Lovell name over the door throughout his ownership.

Louis Petranek, a native of Kankakee, Illinois, purchased the business in 1948. In 1950, he expanded in to the other storefront of the Knight Block, adding a coffee shop and lunch counter. The name was changed to Petranek’s at about the same time.

A large fire May 11, 1954 gutted Petranek’s and severely damaged the upstairs occupants of the Knight Block -- the Patricia Lee Photographic Studio and Mooney’s Fur Shop. Plans to rebuild began immediately. The current building at 426 N. Milwaukee Avenue celebrated its Grand Opening on April 30, 1956. Described by the local newspaper as “ultra-modern”, the low-slung, one-story structure featured air-conditioning, indirect lighting, oak paneling, a restaurant and soda fountain called Marv’s Grill, run by local Marvin Laycock, and the Delta Dining Room, a banquet room in the lower level of the building.

Lou Petranek retired in 1960 and sold the store. Over the next 60 years the store had several owners, including Don Murphy, John Csiha, and current owner, Beau Diab, but the Petranek’s name remained. Exterior architectural changes, including a stucco facade and peaked parapet wall, were made in 1993, but many of the charming 1950s interior details remain.