Cook Park is the historical and modern center of Libertyville. The site of the first permanent dwelling in what would become the village of Libertyville, today the park welcomes visitors on a daily basis. On any given day one will see children frolicking on the playground, teens hanging out with their friends, families gathering for a picnic, or a solitary person reading on a bench. Community events held in and around Cook Park such as the Farmers Market, Car Fun on 21, Lunch in the Park, Festival of the Arts, Libertyville Band concerts, Libertyville Days and the annual tree lighting, draw residents and visitors alike to the downtown. 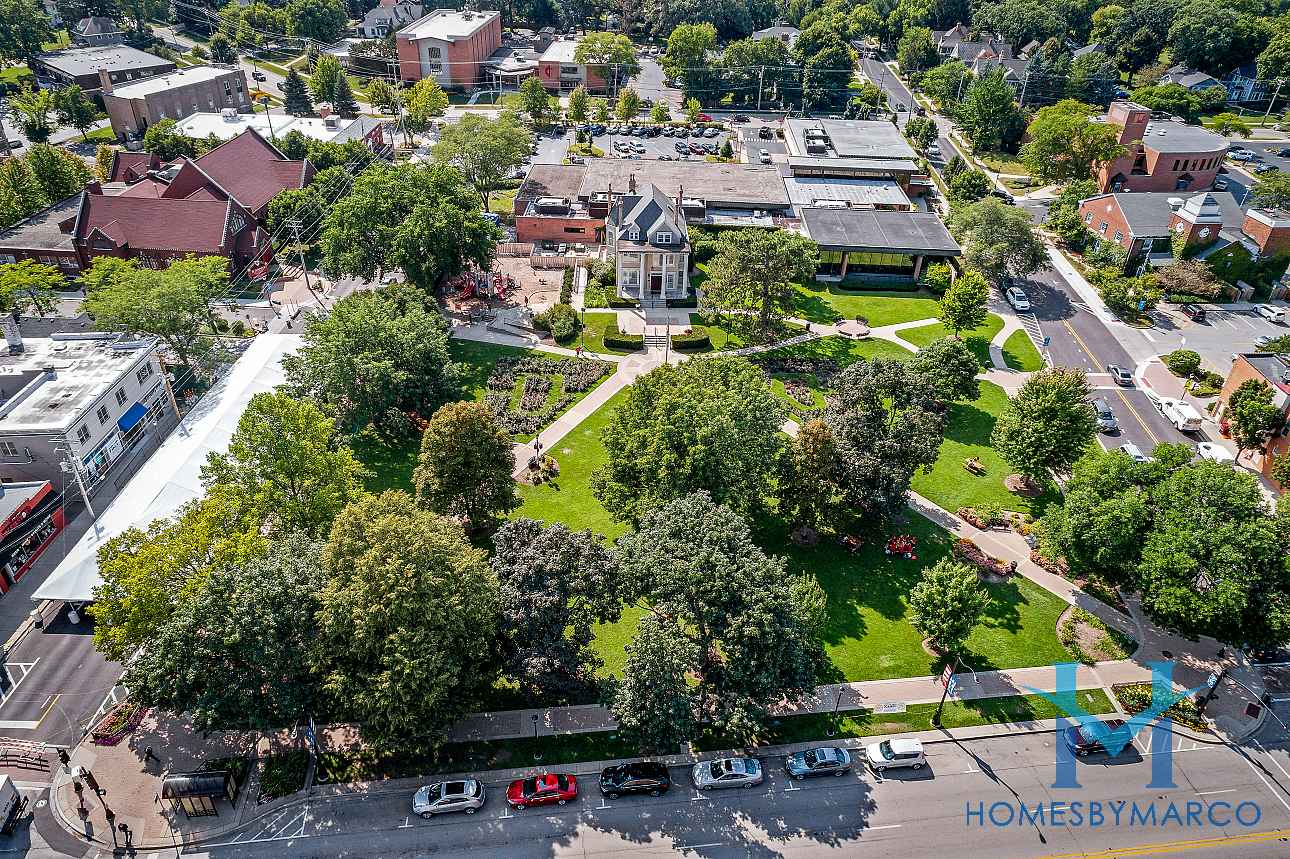 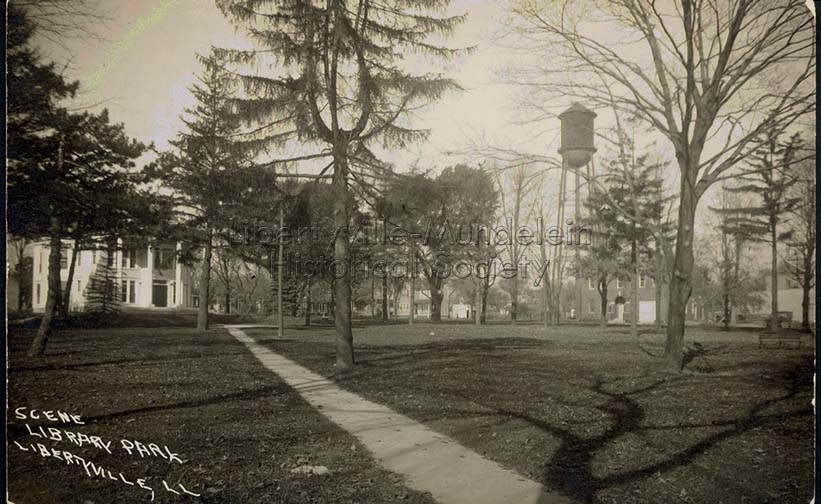 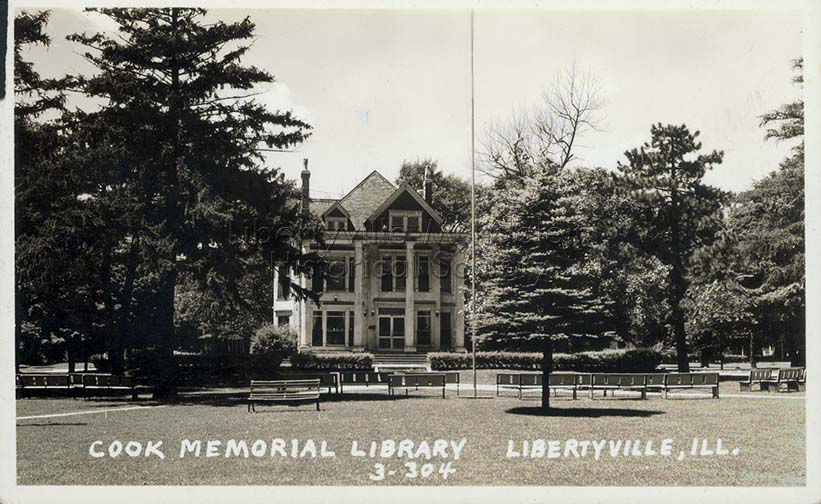 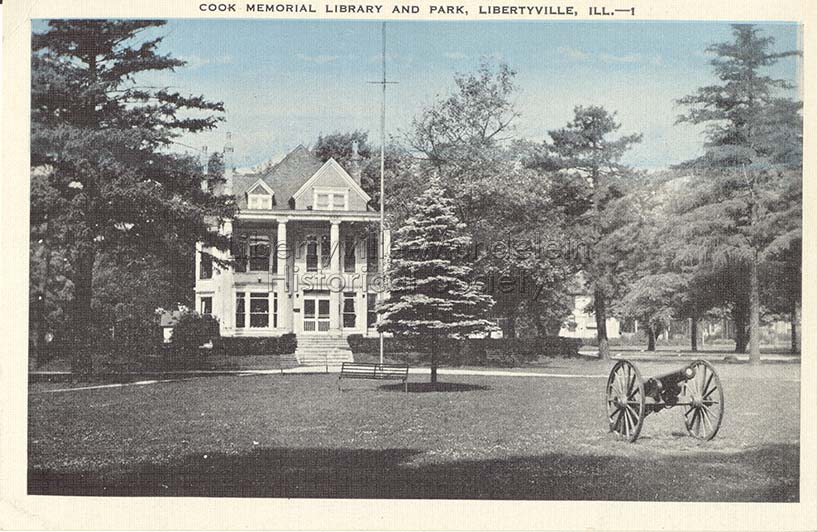 Although trading posts and military forts had been scattered throughout the region since 1695, no true non-native settlement would emerge until following the Treaty of Chicago in 1833. In this treaty, signed between the U.S. Government and the United Nation of Chippewa, Ottawa and Potawatomi Indians, the tribes relinquished their last tracts of Great Lakes land, and the land was opened to non-native settlement.

While the land would not be officially surveyed and available for purchase until 1839-1840, that did not stop some hardy souls from making their way west and north and as they moved into the area, the Des Plaines River was a natural path to follow. The native people of the area had used the Des Plaines River as a travel route for ages.

The land along the trail on the west side of the Des Plaines river was mostly open prairie, but right at the present site of Cook Park there was a grove of oak trees running back to what is now Butler Lake. An Englishman named George Vardin settled in this grove in 1835, just about where the Ansel B. Cook Home is today. That same year William Cooley, Elconah Tingley, and Tobias Wynkoop made claims on the north side of present day Libertyville.

In June of 1836, a stage coach line was established along the new Milwaukee Road, previously a Native American trail known as the Milwalky Trace, connecting Chicago to Milwaukee. The newly-established road cut through the fledgling community at Vardin’s Grove and helped to secure its future as an established town. A log school house, the first school building in Lake County, was built on the north edge of the grove this same year.

On July 4th, 1836, the early settlers of Vardin’s Grove erected a flag pole in a small clearing, and dubbed the community Independence Grove. However, when the new town applied for a post office in 1837, it was found that another Independence Grove already existed in Illinois. Archimedes Wynkoop, nephew of Tobias Wynkoop, suggested the name Libertyville and the petition was granted. Henry Steele, who had taken up residence in the former Vardin Cabin (Vardin had moved to places unknown), was appointed the first postmaster.

Dr. Jesse Haven Foster arrived from Vermont in 1837 and was the first practicing physician in the area. He purchased “The Grove”, about 18 ½ acres along the Milwaukee Road, the location originally settled by George Vardin. Many years later, Dr. Foster would sell the property to his son-in-law, Ansel B. Cook, who, in 1878, would build the house which sits in Libertyville’s heart today.

Ansel B. Cook passed away in 1898. In accordance with the wishes of her husband, after her death in December 1919 Cook’s widow Emily Barrows Cook left the house and gardens to the Village of Libertyville for use as a library and park. The Cook Memorial Library opened in the house in 1921 after fundraising and architectural changes intended to make the house look more like a civic building. Learn more about the Ansel B. Cook Home and the Cook Memorial Public Library on other stops of the tour.

Features of Cook Park changed over the years to meet community needs. A Civil War cannon, scrapped for the war effort during WWII, once graced the park. The Libertyville Recreation Association hosted an annual tennis tournament in the 1930s and 1940s on now long gone tennis courts and the Men’s Garden Club planted the Cook Park Rose Garden in 1952. The garden is now maintained by the Gardeners Club of Central Lake County and is home to approximately 700 plants of nearly 60 rose varieties.

In addition to serving as a home for community events, Cook Park has welcomed national celebrities. In 1942, actor James Cagney was the star attraction at a World War II bond rally. The following year another bond rally featured Helen Keller. Unfortunately, due to rain the event was moved from Cook Park to the high school gymnasium. Perhaps the most famous visitor of all, presidential candidate John F. Kennedy, accompanied by his sister Eunice Shriver, stumped in front of the then Cook Memorial Library on October 25, 1960.