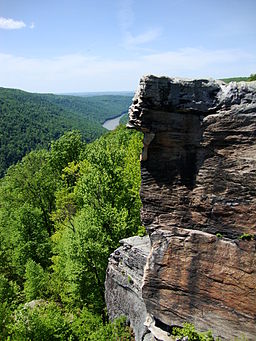 Established in 1936 and boasting over 12,000 acres of land, Coopers Rock State Forest is the largest state forest in West Virginia. It spans parts of both Monongalia and Preston counties and offers panoramic views of the region. The park is rich in national, local, and geologic history. These days, Coopers Rock is a popular destination for iconic Appalachian vistas and a variety of recreational pursuits. It is one of West Virginia's most valuable state parks in terms of revenue generated and sees almost 300,000 visitors a year. It is also host to research and conservation efforts through West Virginia University. 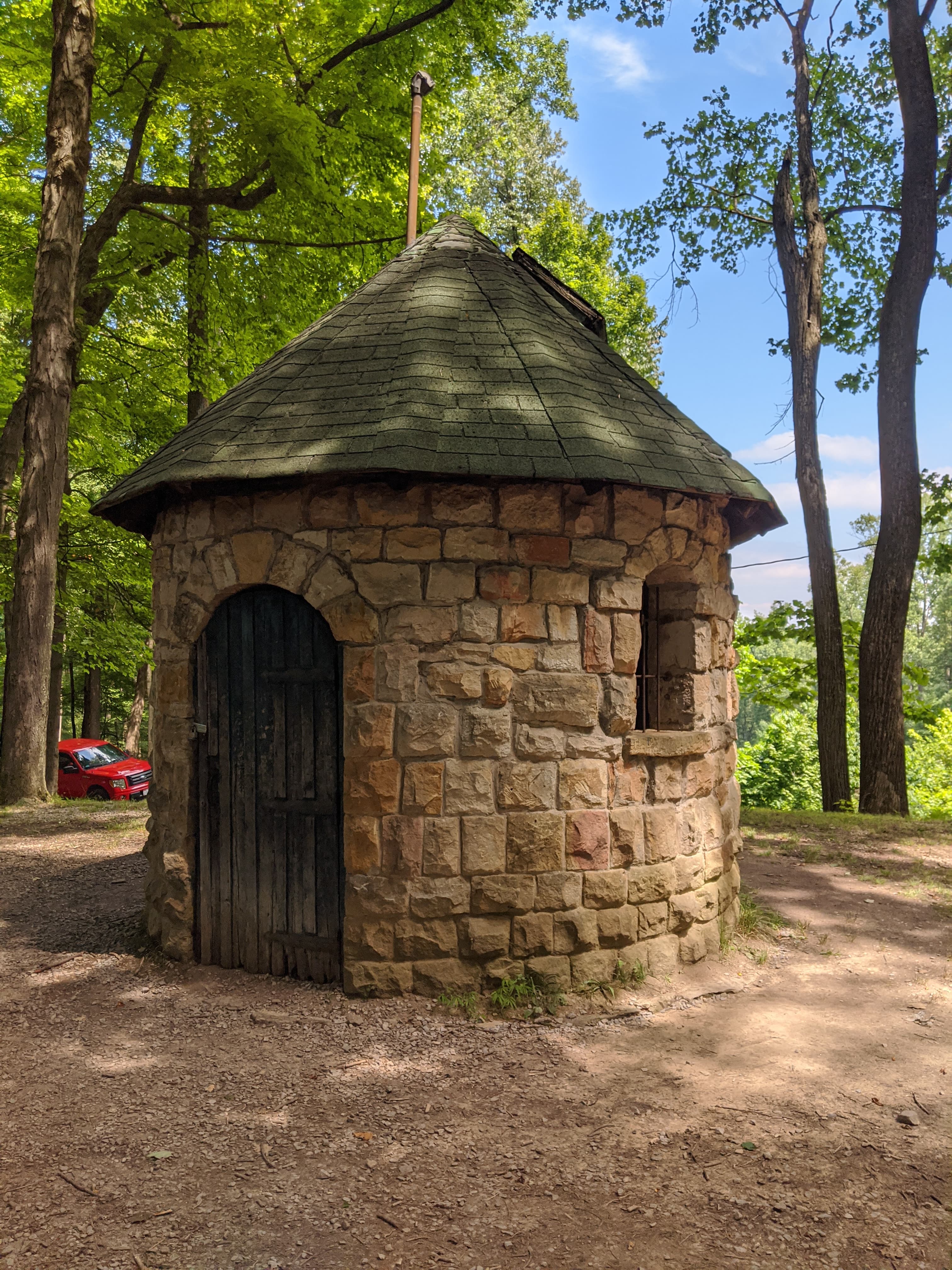 The pumphouse is a small circular building with a conical roof tapering to a point. It is constructed of sandstone with a wooden door and open iron-barred windows. The roof was once wood shake but was replaced with asphalt shingles in the 1970s. This building varies slightly from other CCC constructed buildings at Coopers Rock. The stone construction is tighter and more precise. The iron hinges, latch, and window bars that must have been blacksmithed are also a departure from convention. No other Camp Rhododendron building – with the exception of the superintendent's garage – displays iron elements. Finally, even the curvilinear form of the pumphouse is unique. Other Camp Rhododendron constructed buildings show a heavy emphasis on emphatic straight lines. The pumphouse was originally built to provide water to Camp Rhododendron, but is no longer in use. 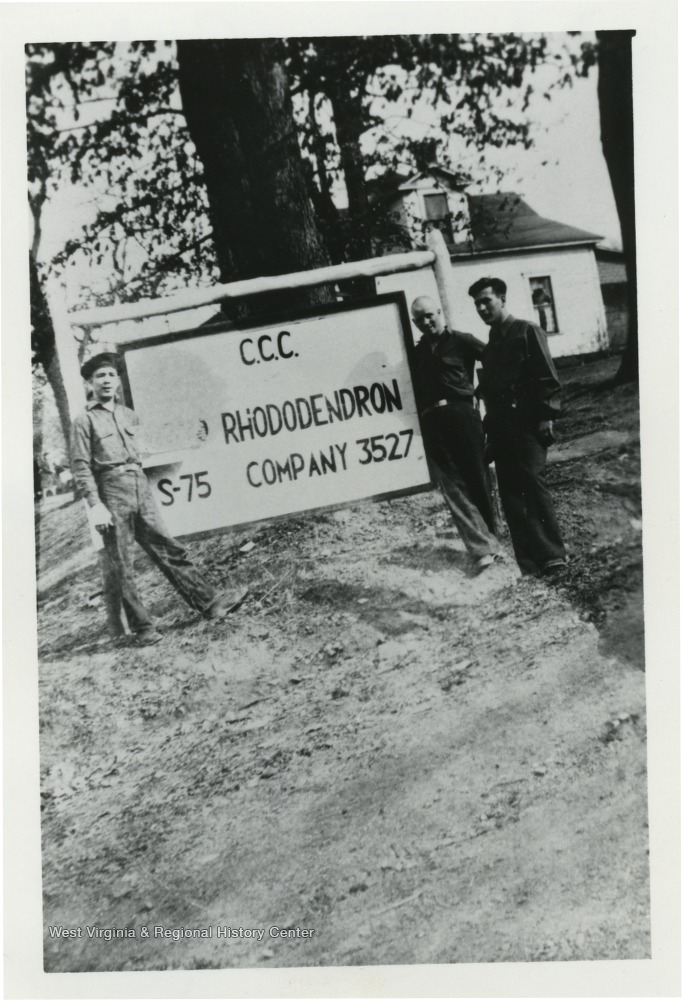 Camp Rhododendron was a Civilian Conservation Corps (CCC) camp from 1936-1942. The CCC was a government employment program for young men that focused primarily on preserving natural resources and landscapes. Camp Rhododendron was instrumental in establishing and constructing Coopers Rock State Forest. Camp members built a variety of structures including the overlook, picnic pavilions, information stations, administrative buildings, staff residences, and many landscape infrastructure features. Beyond working, Camp Rhododendron residents also participated in educational and recreational pursuits. Though Camp Rhododendron itself was temporary, the structures created and the impact on the landscape of Coopers Rock are still visible today. 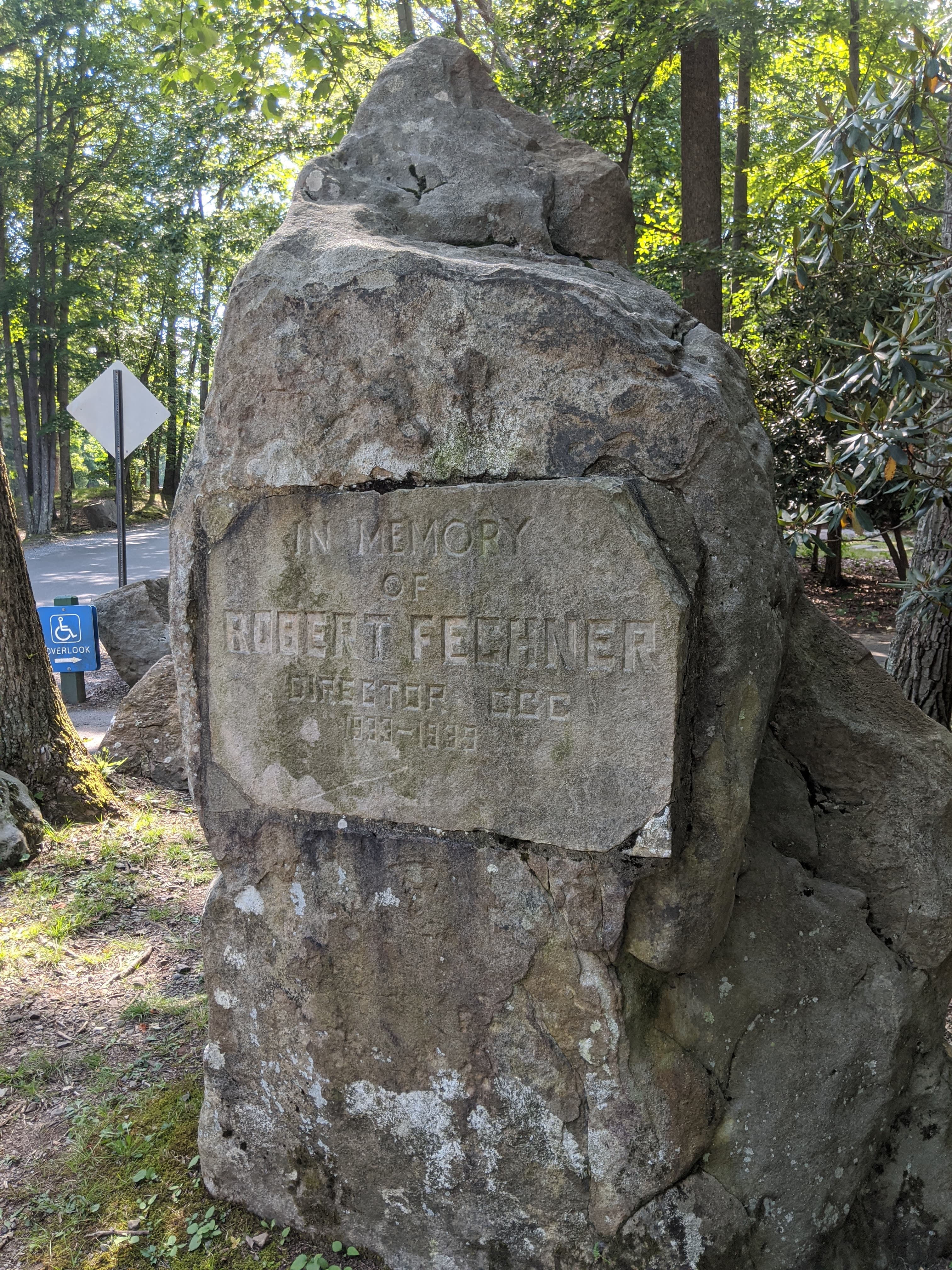 The Robert Fechner Monument was carved out of a single piece of sandstone and stands nearly ten feet high and six feet wide. The monument commemorates Robert Fechner, the first director of the CCC. Fechner was a lifelong blue-collar worker, union organizer, and labor negotiator. The CCC program was initially met by opposition from labor leaders who feared that the program would be detrimental to workers across the board, which is why why Franklin Roosevelt appointed Fechner. Fechner proved to be largely adept at both assuaging labor fears and capably handling the administration of the CCC program. However, he was also the target of criticism for his reluctance to promote African-American CCC opportunities and for his stance that education in the CCC program should be a tangential benefit only. Fechner served as director from 1933 until his death in 1939. The monument to Fechner has experienced some environmental erosion, but otherwise remains in good condition. 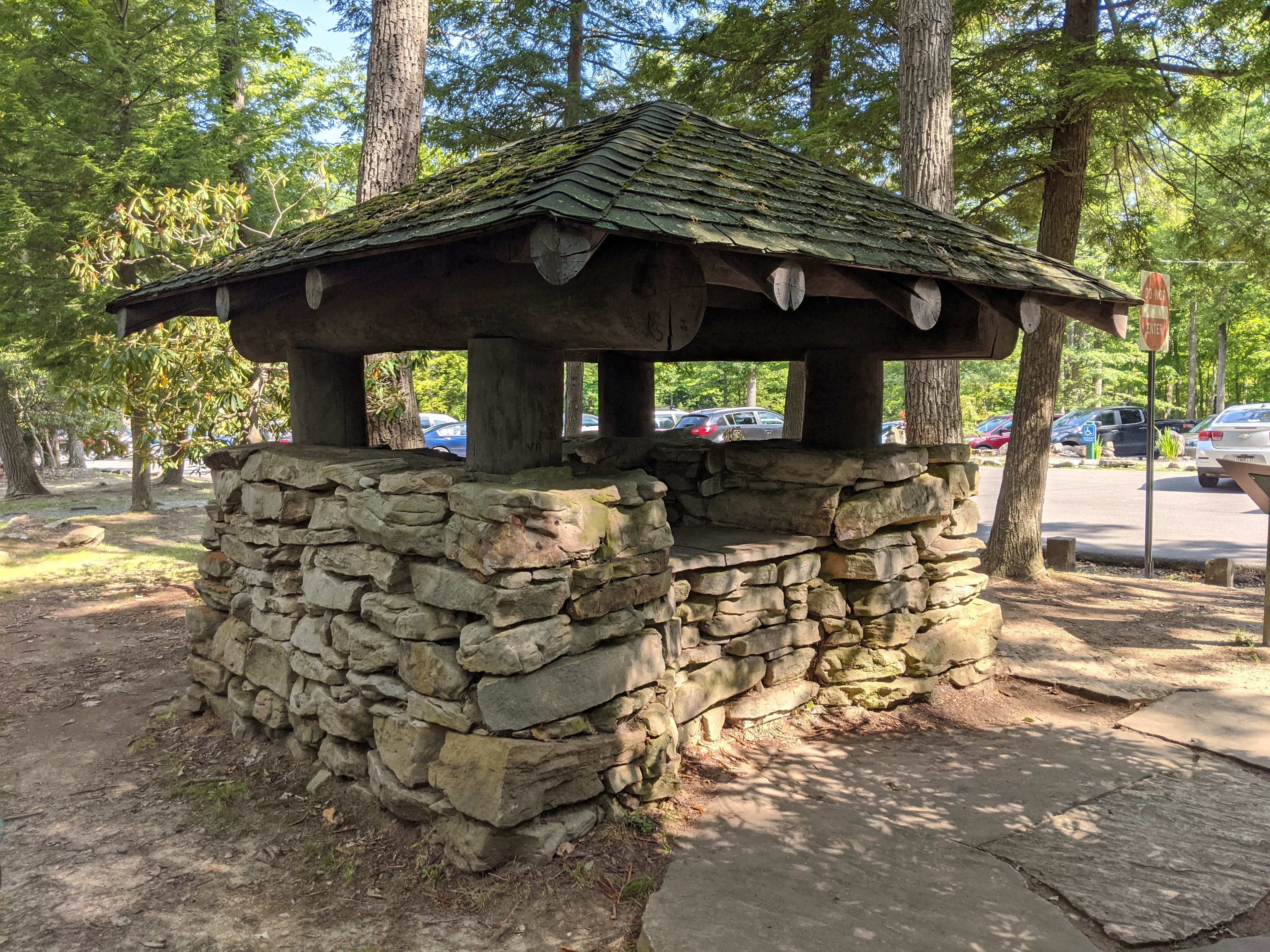 The information booth is a small roughly square shelter constructed with sandstone and wood. The structure features a counter on the front and is open on the rear to allow entry and exit. Two benches span the interior side walls. Like with all Camp Rhododendron constructed buildings, the original wood shake roof was replaced with asphalt shingles in the 1970s. Additionally, a sign saying "Information Booth" and a sign detailing hours of operation have been removed. The building originally served as the primary point of contact between park staff and visitors, providing camping and hunting licenses, directions, and park information. The information booth is no longer used in any official capacity.

Pavilion 1 is a sandstone and poplar log picnic shelter measuring fifty-five feet long and thirty-eight feet wide. Massive sandstone columns support the corners of the building. These columns are roughly piled, larger at the bottom and tapering as they approach the roof. Approximately three-foot high stone walls connect the pillars, though a multitude of breaks in the walls help open the space to the natural surroundings. A solid wooden roof is composed of whole poplar logs. The symmetrical structure is split by a large sandstone fireplace with a chimney. The pavilion is almost identical to its original construction. The only changes have been the replacement of picnic tables over the years, and a 1970s asphalt roof to replace the previous wood shake shingles. 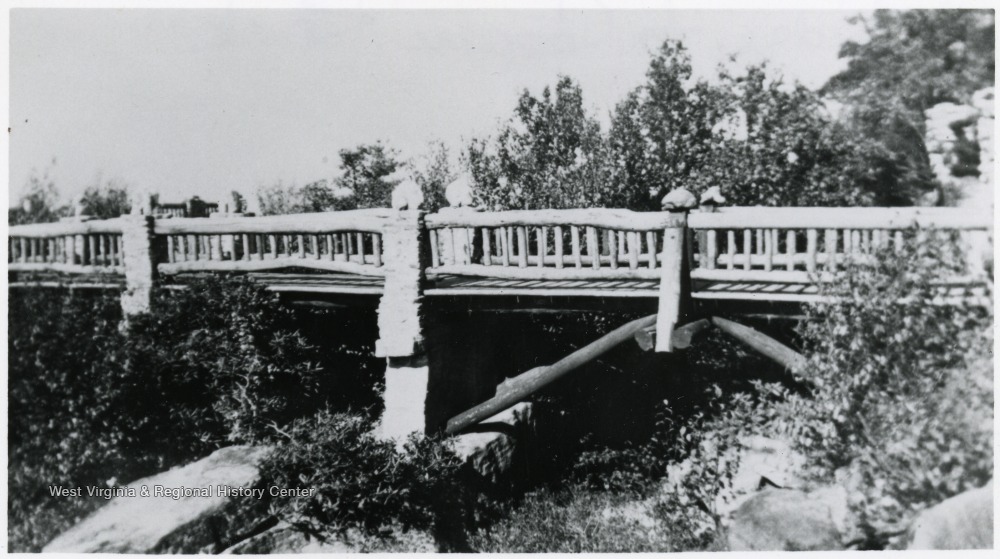 Towering over 1,000 feet above the Cheat River, the Coopers Rock Overlook surveys one of the most quintessential West Virginia panoramas. The sandstone outcroppings that comprise the overlook were initially accessible to only the most physically fit and daring, as enjoying the view required scaling the rock by hand. The construction of the Coopers Rock Overlook was one of the first tasks Camp Rhododendron set out to complete. CCC members created a temporary bridge to the rock and erected barriers around the edges of it. These barriers still stand today and are composed of sandstone pylons connected by locust logs. After the overlook was made safe, a permanent bridge was constructed. It was similarly constructed using locust logs as supports with oak planks for the walkway. This bridge was maintained and repaired for several decades until it became untenable to ensure the safety of users. In the late 2010s, the bridge was largely replaced with a new walkway, though the support pylons and railings remain original. 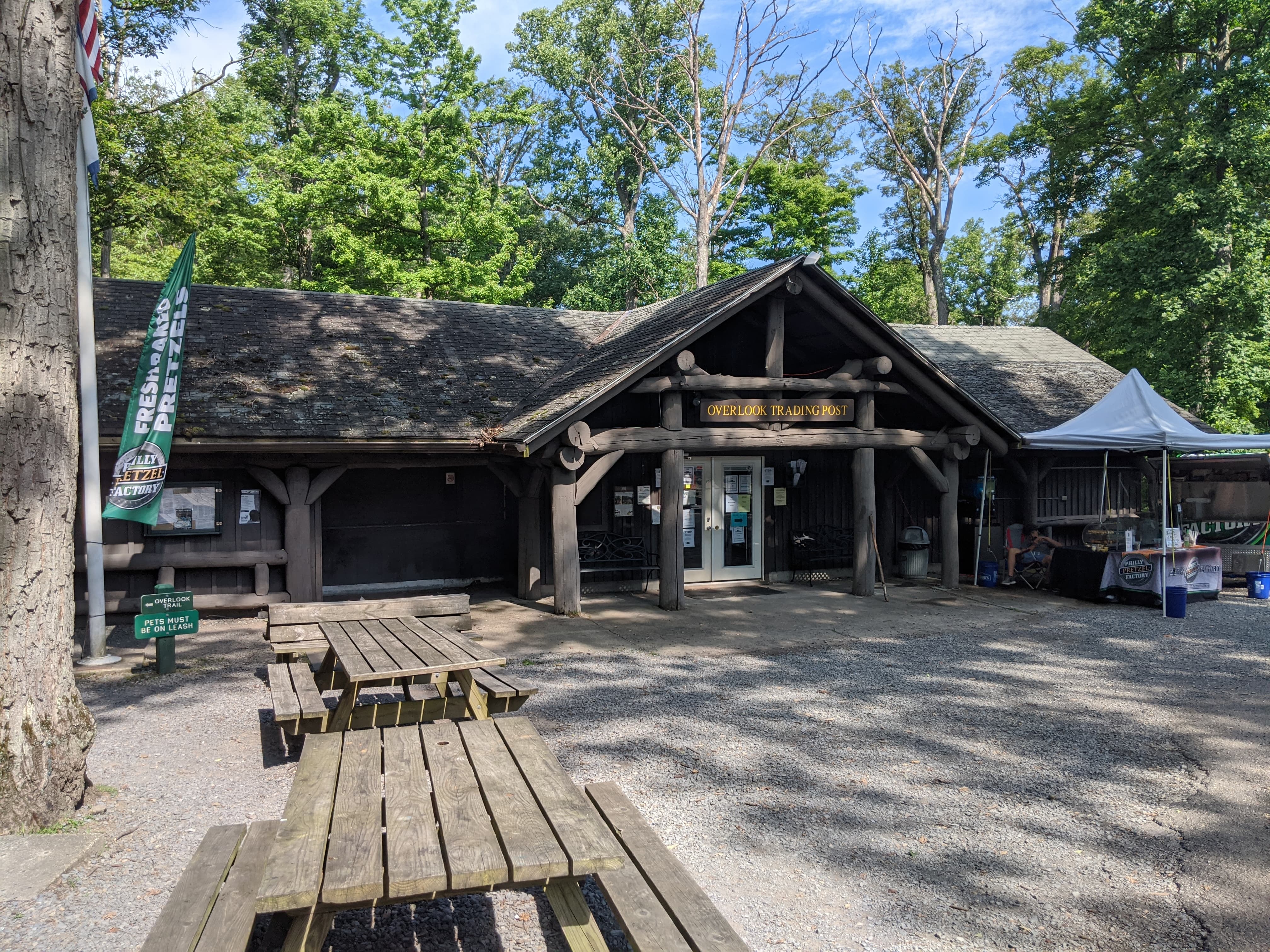 The Overlook Trading Post is a symmetrical roughly t-shaped building of wood and sandstone. Originally, the lengthwise front of the building was an open-air picnic area. The back extension of the building was a two-room log cabin occupied by a park staff member. It also doubled as a first-aid station. In the 1950s, the cabin was converted to a concession stand. Sometime after 1980, the entire structure was renovated again to become a completely enclosed building. These days, the building hosts a gift shop. Thanks to the various renovations, the Overlook Trading Post is the most heavily modified CCC structure at Coopers Rock. However, CCC construction is still readily visible in the sandstone foundation and parts of the ceiling and walls that were left intact. 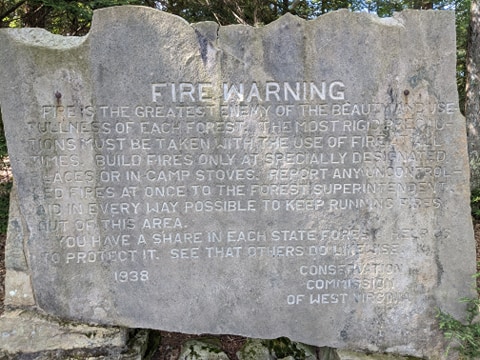 The fire warning sign was chiseled into a block of sandstone in 1938. It measures eight feet tall by six feet wide. The message delivered by the sign aligns well with the CCCs mission of preserving natural beauty for future generations and encouraging responsible stewardship. Curiously, it appears that the creator(s) made a mistake while making the sign, as the backside also displays the start of the message found on the front. Other than erosion from natural forces, the sign remains exactly as it was when it was first created. 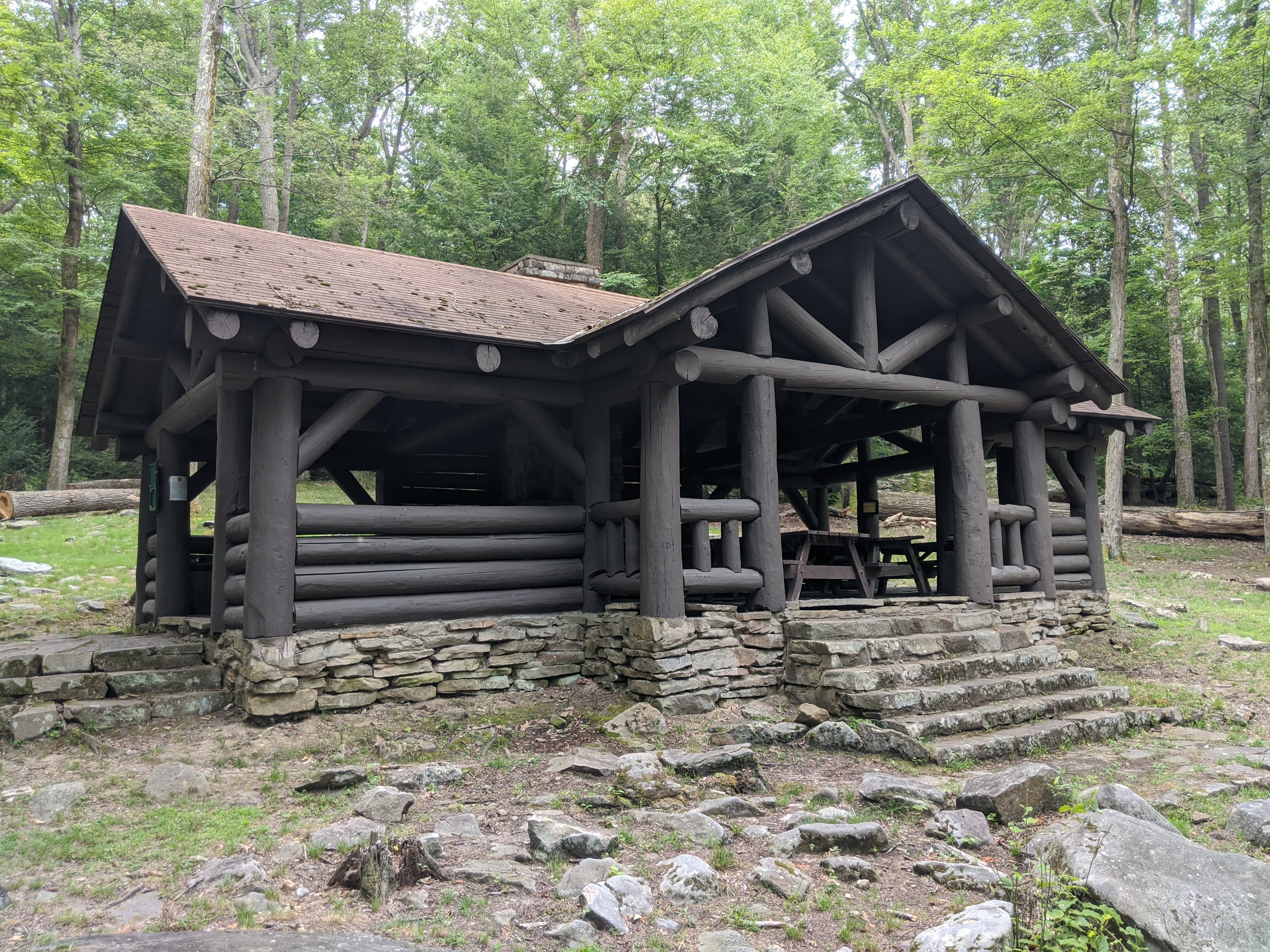 Pavilion 3 is constructed similarly to Pavilions 1 and 2. The scale is slightly smaller however, as Pavilion 3 measures forty feet long by twenty-five feet wide. The structure is enclosed with approximately three foot tall log walls. The enveloping nature of the thick walls is offset by entrances on three sides of the shelter. The cut stone fireplace and chimney help the building feel comfortable in its environment. The front of the building provides a simple but grand facade to those ascending the steps to it from the parking lot. From this angle, the chimney appears shorter and only minimally accentuates the pavilion's height. For those descending to Pavilion 3 via the Rock City Trail or the Eagle Trail however, the chimney lends height to the structure. This prevents the building from becoming lost in landscape or appearing too low to the ground. The overall impression of Pavilion 3 is welcoming; even the entrances invite people in from each angle of approach. 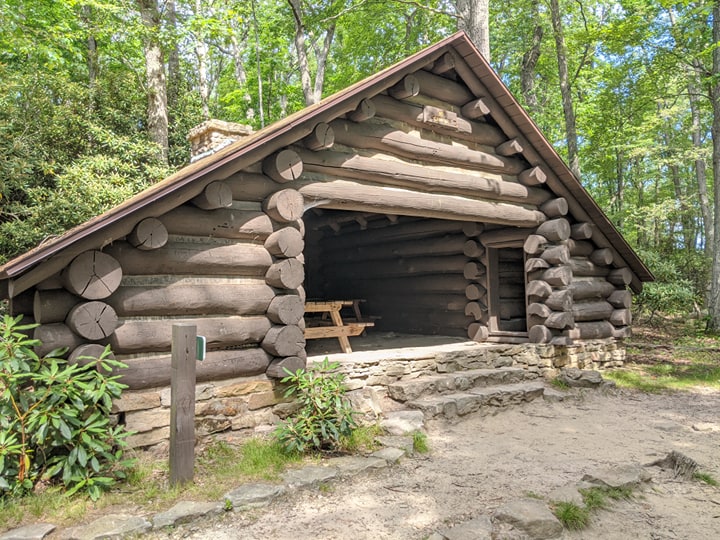 The Rock City Trail Chalet is a moderately sized building near the start of the Rock City section of Coopers Rock. Its name comes from the sharply sloped roof that is reminiscent of Swiss mountain chalets. The building has a large open section facing the trail and two windows on the back wall, but is otherwise completely enclosed. It is composed of a large central room flanked by a smaller room on each side. These smaller rooms were likely intended for wood storage to fuel the fireplace on the back wall. The chalet is the most isolated structure Camp Rhododendron built. The closest road access to the building still requires a half-mile hike. The structure is unmodified, though it has been heavily graffitied and vandalized over the years.

This tour covers every building constructed for Coopers Rock State Forest by the Civilian Conservation Corps camp of Camp Rhododendron. The best way to experience the tour is to park in the main Coopers Rock parking lot and visit stops 1-10 before using Rattlesnake Trail to visit stop 11. Rock City Trail meets stop 12 at Eagle Trail, which leads back to the parking area. The complete tour covers approximately a mile and a half. Be sure to also consult Clio for information and directions to the former Superintendent's home.