Item 8 of 14
This is a contributing entry for Irvine Park History Walk and only appears as part of that tour.Learn More.

In 1850 St. Paul had been the capital of the US Territory of Minnesota for one year and had a population of about 900 people. It was on the verge of an economic and population boom fueled by two conjoined factors: The United States' forcible removal of Dakota people from a huge swathe of their homelands between St. Paul south to the Iowa border that ramped up in 1851. And a nationwide land speculation boom brought thousands of colonists to the ceded Dakota homelands. So, if you'd been here in this spot in 1850, the year before, what could you still have seen, smelled, and heard?

View of Kellogg Boulevard from Uppertown (1851) 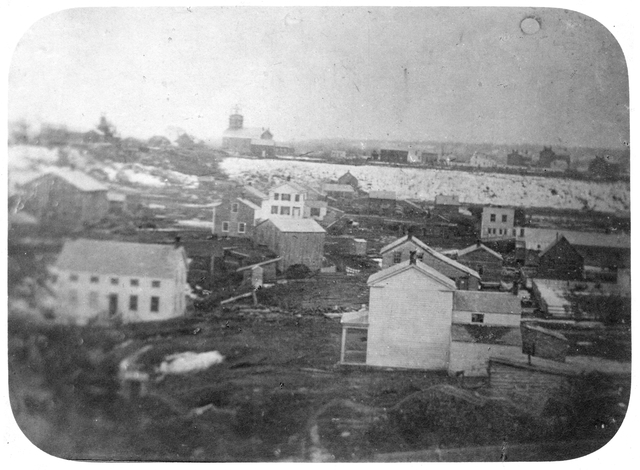 At the river, instead of a Caribou Coffee and a park, steamboats disgorging passengers at muddy levee, except in the winter when the river froze St. Paul shut.

On the slope, instead of the Science Museum, St. Paul’s first brewery, owned and operated by a German immigrant named Anton Yoerg. A barrel factory, a saddlery and stable. A sawmill running overtime to produce the lumber newcomers needed to put up more houses, shops, and factories. Instead of condos, simple log homes, many of them built by Jim Thompson, a formerly enslaved man who was a prominent citizen of early St. Paul. Instead of paved streets, narrow crosswise dirt roads that alternated between wet and deeply muddy and so dry and rutted they once jostled a casket out of a moving wagon during a funeral procession.

Instead of West 7th Street, a short road that was supposed to reach the US military base at Fort Snelling, but didn't, where one might patronize a hotel notable for lice or a handful of small businesses, and catch sight of the occasional bear.

THE SOUNDS AND SMELLS

People speaking combinations of English, Dakota, French, Ho Chunk, German, Ojibwe, and other Native American languages. The strike of hammers on nails. The buzz of the mill saw. The chuff of steamboat engines. The shriek of wooden wheels and axles on fur trade carts. The distant roar of the falls upriver. A soldier playing Reveille at Fort Snelling.

The stink of tanning leather. The yeast of brewing beer. The scent of newly-lumbered wood. Horse manure and lots of it. During a later soap shortage, the smell of unwashed humans. The occasional bear.