This site was dedicated in honor of Joe Anderson, a man who was enslaved by Jesse Woodson Anderson, a founding trustee of Mars Hill University. The founding trustees of Mars Hill University, including Jesse Anderson, underestimated construction costs and were unable to make the final payment to the company. In response, they decided to use Joe as collateral for a lien against Mars Hill University shortly after it was founded. After the lien was paid, legal ownership of Joe Anderson returned to Jesse Anderson. Joe Anderson remained in bondage until the end of the American Civil War. Joe Lived the rest of his life quietly on Gabriel's Creek, which just outside of Mars Hill. The Anderson-Rosenwald School, a school for African American children in Madison County during the years of separate schools, was named in his honor and this marker was dedicated to preserving the memory of Joe Anderson and the connection between slavery and Mars Hill.

A cartoon in Ripley's Believe It Or Not depicting Joe Anderson. Courtesy of The Southern Appalachian Archives. 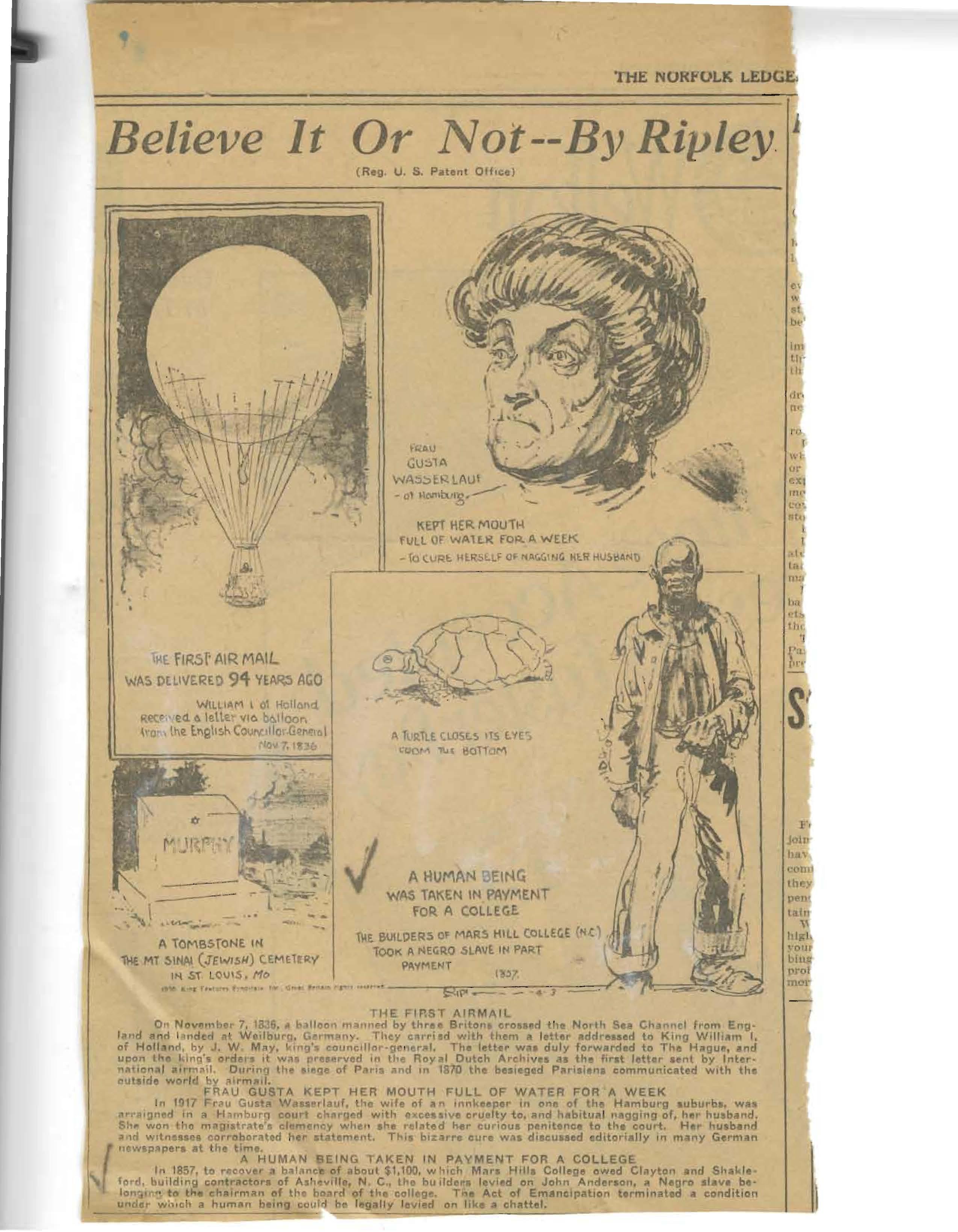 The Joe Anderson Memorial at Mars Hill University in 1932. Courtesy of The Southern Appalachian Archives. 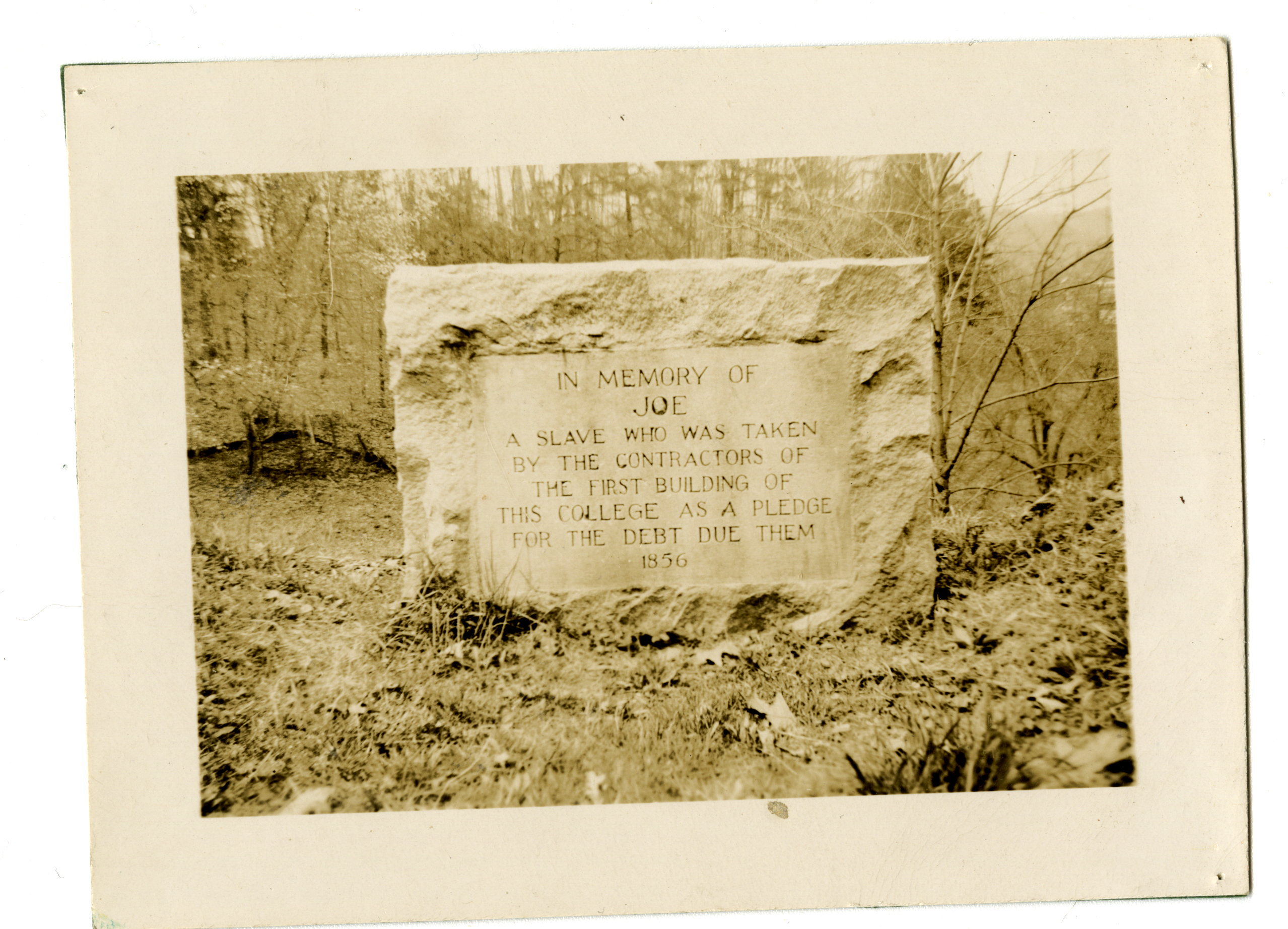 Joe Anderson Memorial Site was dedicated in honor of the former 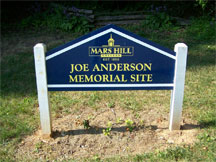 Joe Anderson was an enslaved African-American from Mars Hill, North Carolina. Joe was owned by Jesse Woodson Anderson, a founding trustees of Mars Hill College. During construction, the college's founders, including Jesse Anderson, underestimated construction costs, and were unable to make the final payment to the Asheville based contractor. This resulted in a lien being placed against the building and Joe Anderson was taken as collateral. The trustees had five days to raise the money to make their payment on the loan; if they failed, Joe would be sold to the highest bidder. The money for the payment was eventually raised, and Joe returned home. Following the Civil War, Joe Anderson's remained in Madison County, until his death. In 1932 his remains were taken to the campus, where a marker still remains.

Joe Anderson's legacy continued long after his death. In the 1920s, the president of Sears, Roebuck and Co, Julius Rosenwald started a fund to help build schools in the rural areas of Southern states. These schools would allow African-American children to get an education during the segregation era of the American South. The schools were financed with matching grants from the Rosenwald Fund, local governments, and contributions from members of local African-American communities.

In 1930, one of these schools opened in the Long Ridge community of Mars Hill, North Carolina, and it was called The Anderson Rosenwald School. In 1961 the first African-American student, Oralene Graves Simmons who is the great-great-granddaughter of Joe Anderson, was admitted to Mars Hill University.