During the 1800s, naval stores were Florida's second largest industry. Pine tar and oil of turpentine were vital to the caulking of sailing vessels. Turpentine camps were abundant across Florida, including Manatee County. Smaller turpentine stills such as this one once were scattered throughout Florida’s pinewood forests. These turpentine stills processed the rosin or gum, which had been extracted from the trees. A turpentine still included a kettle like the one seen here and a condenser, as well as troughs which would have been used for refining the resin. The kettle seen here was part of a larger process. When in use, it would have been surrounded by a brick wall. Fire did not touch the kettle, but instead, heated the air in the cavity around it. 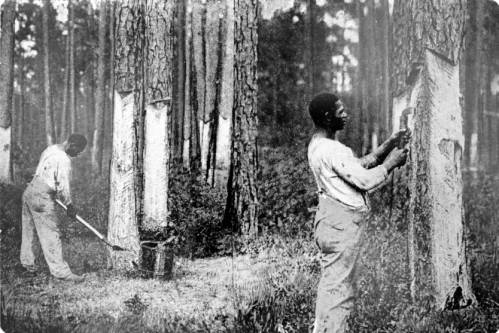 1910, front view of a turpentine still with chimney and large barrel 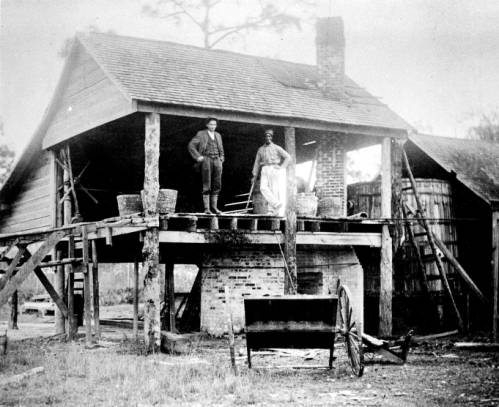 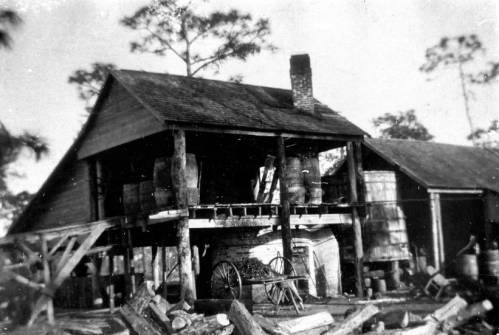 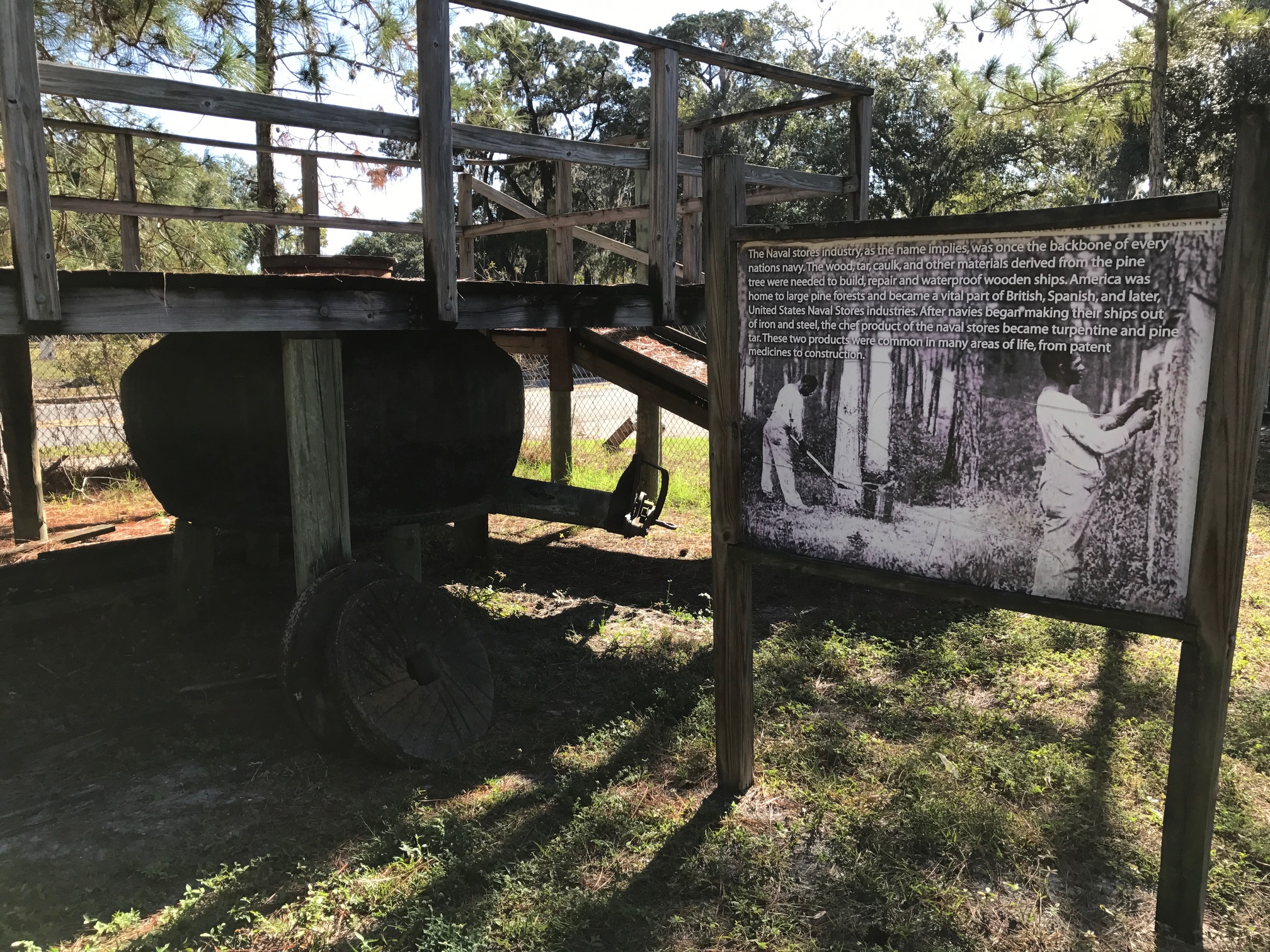 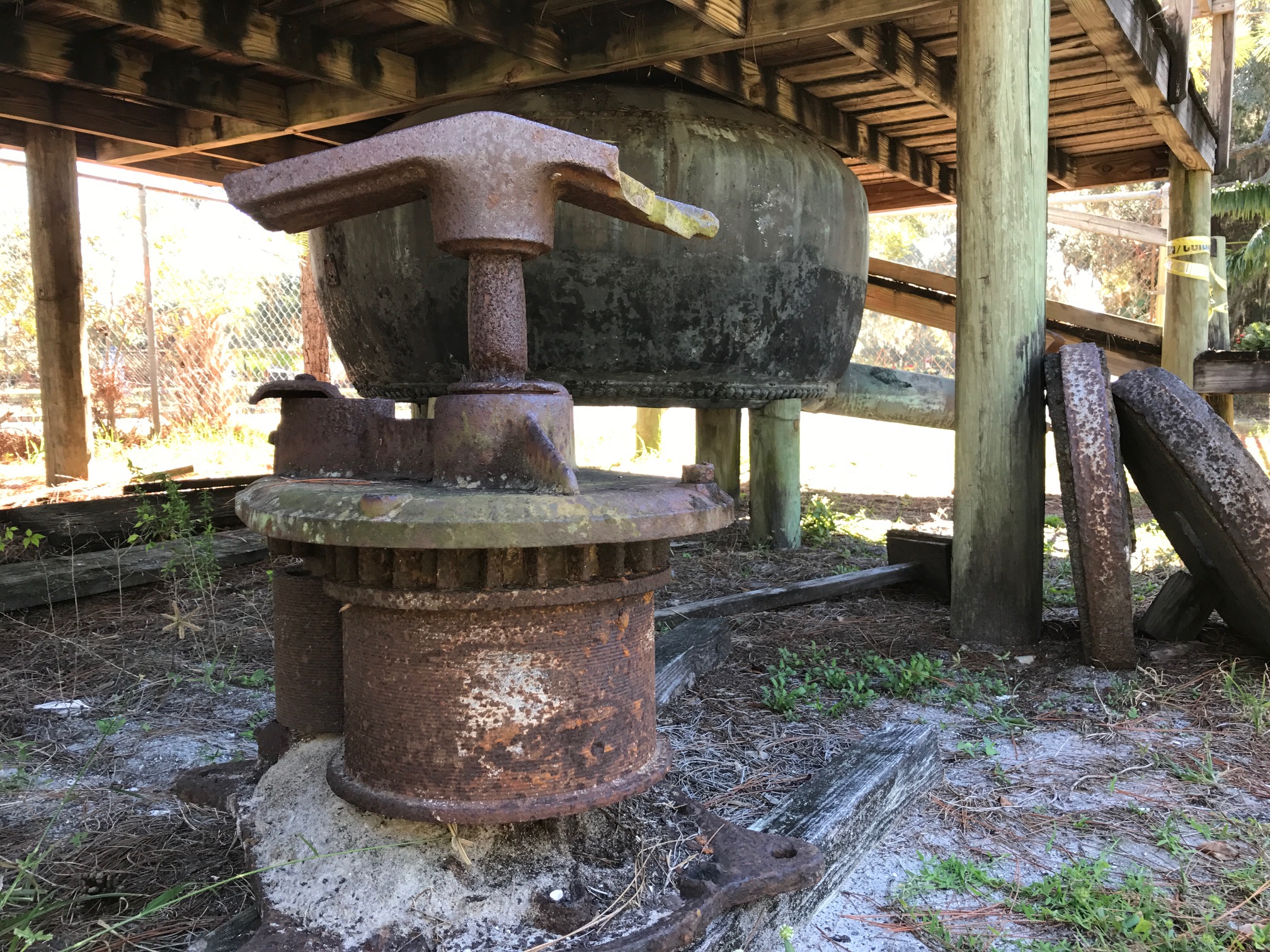 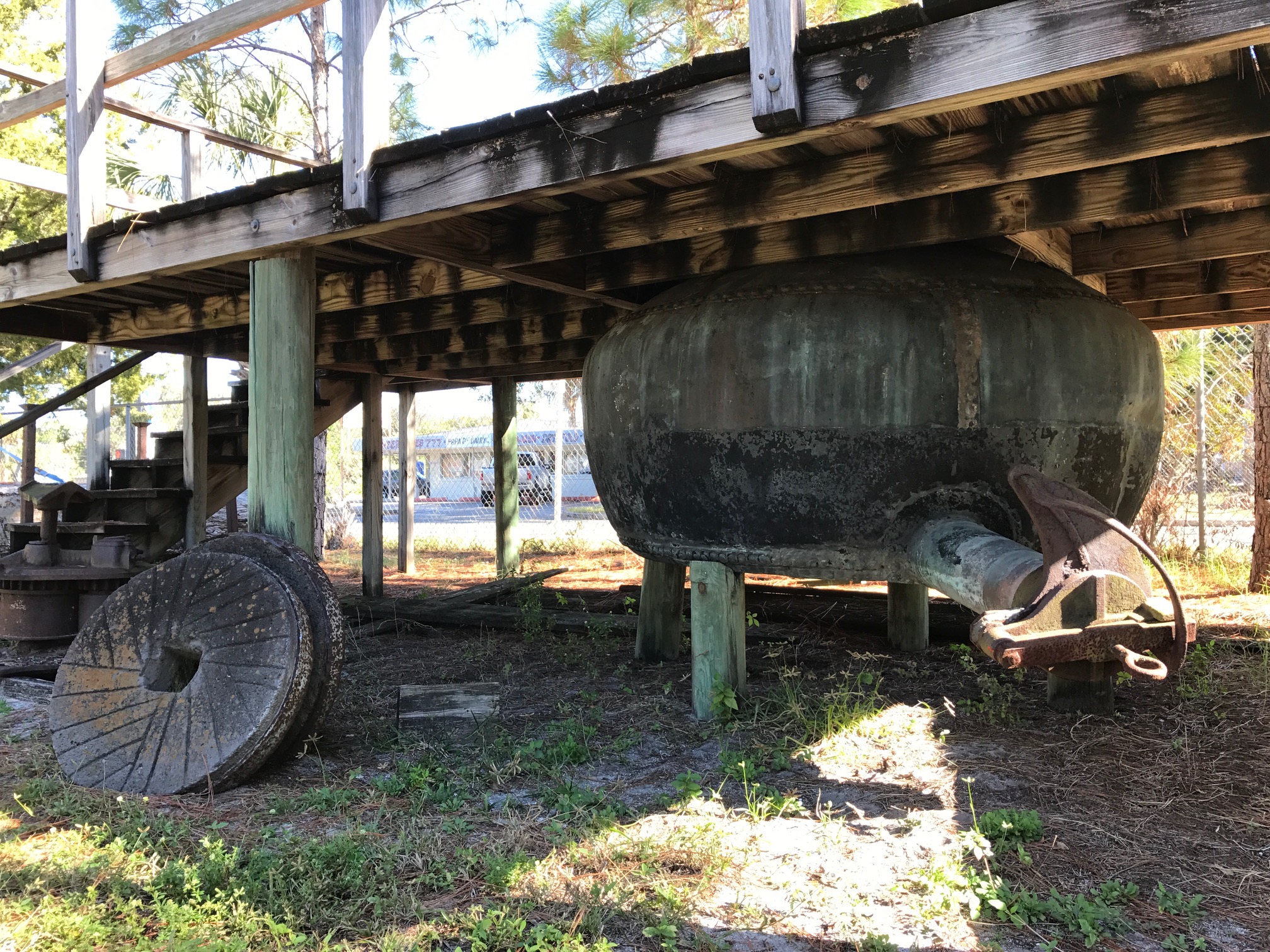 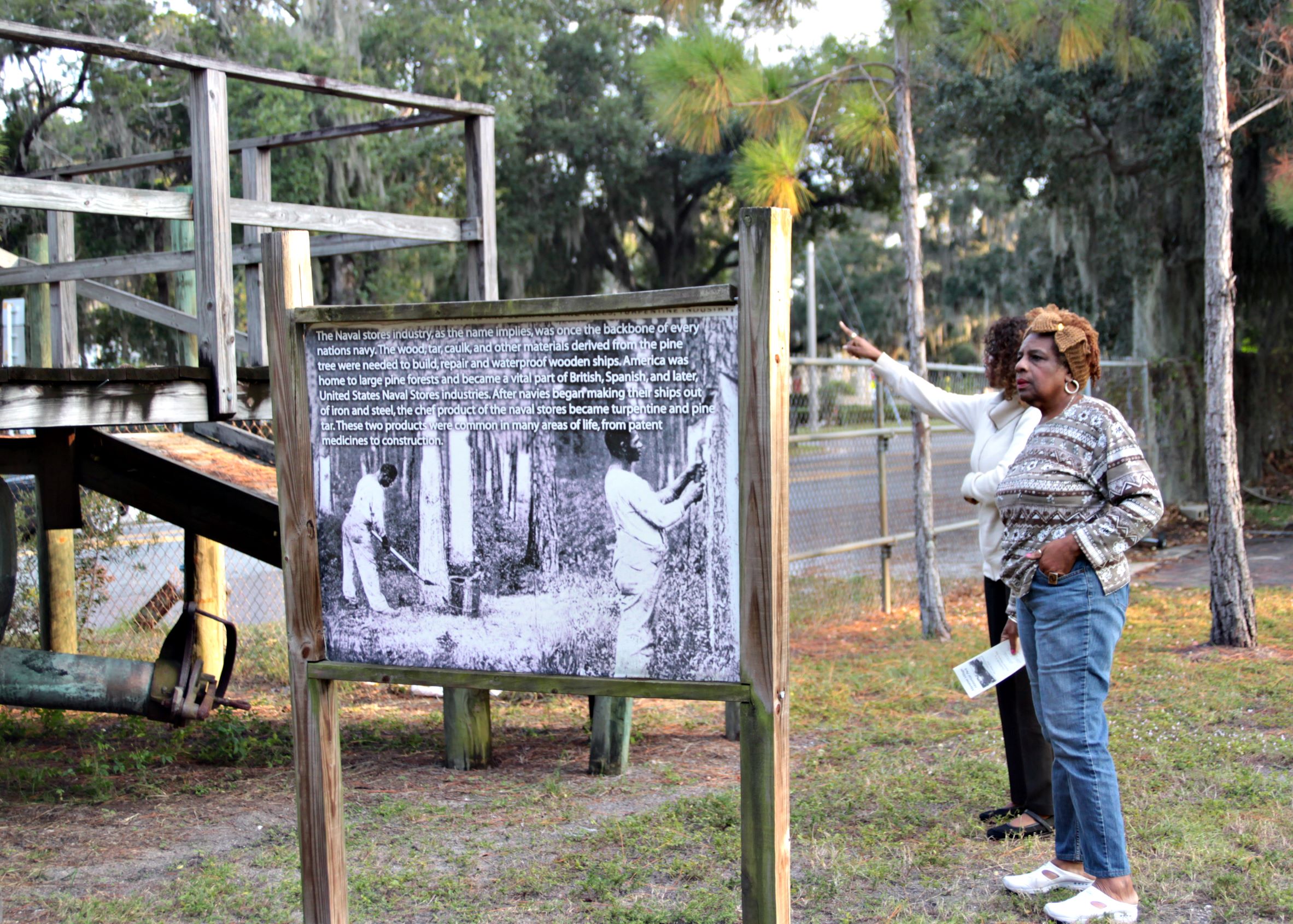 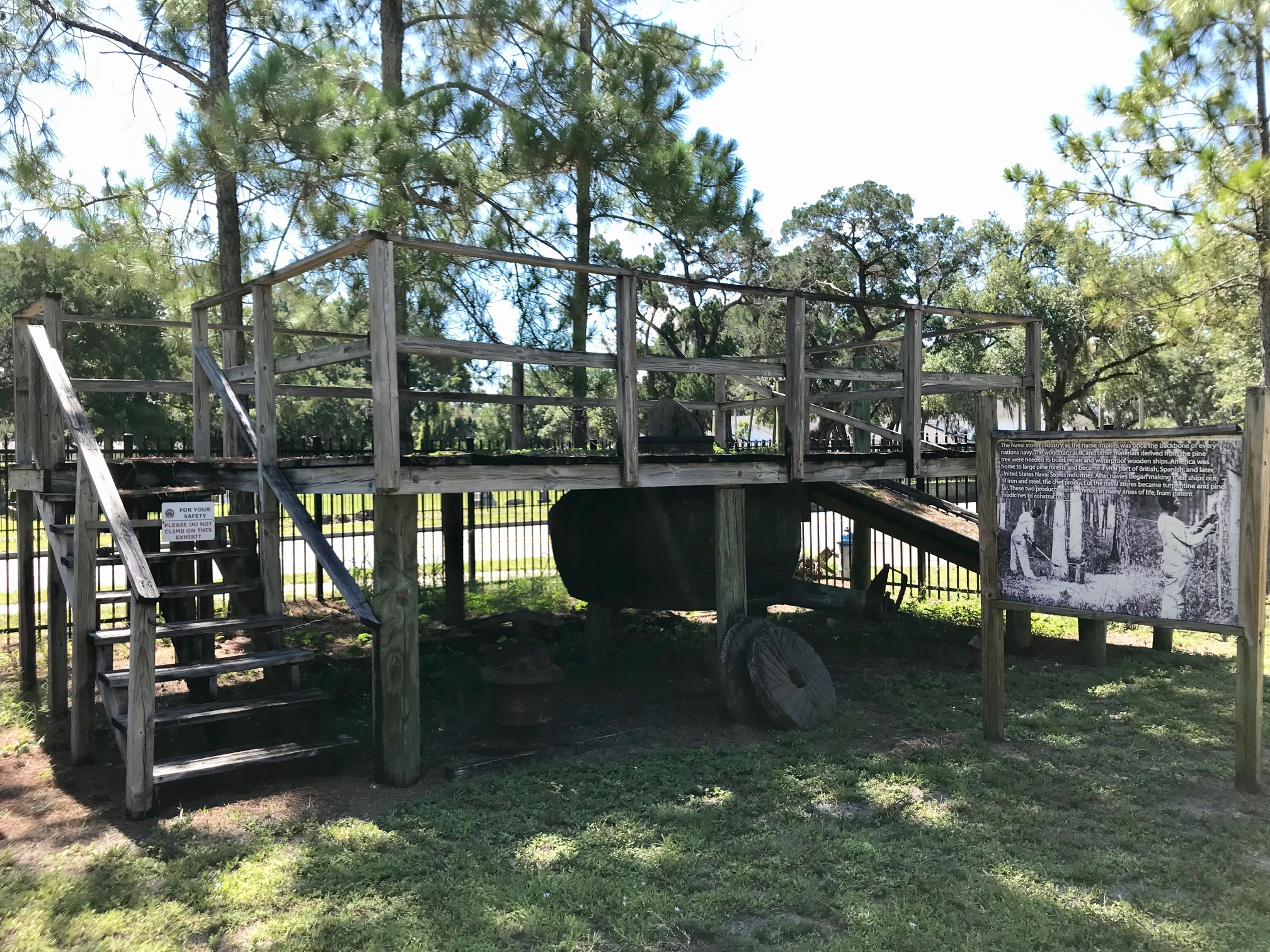 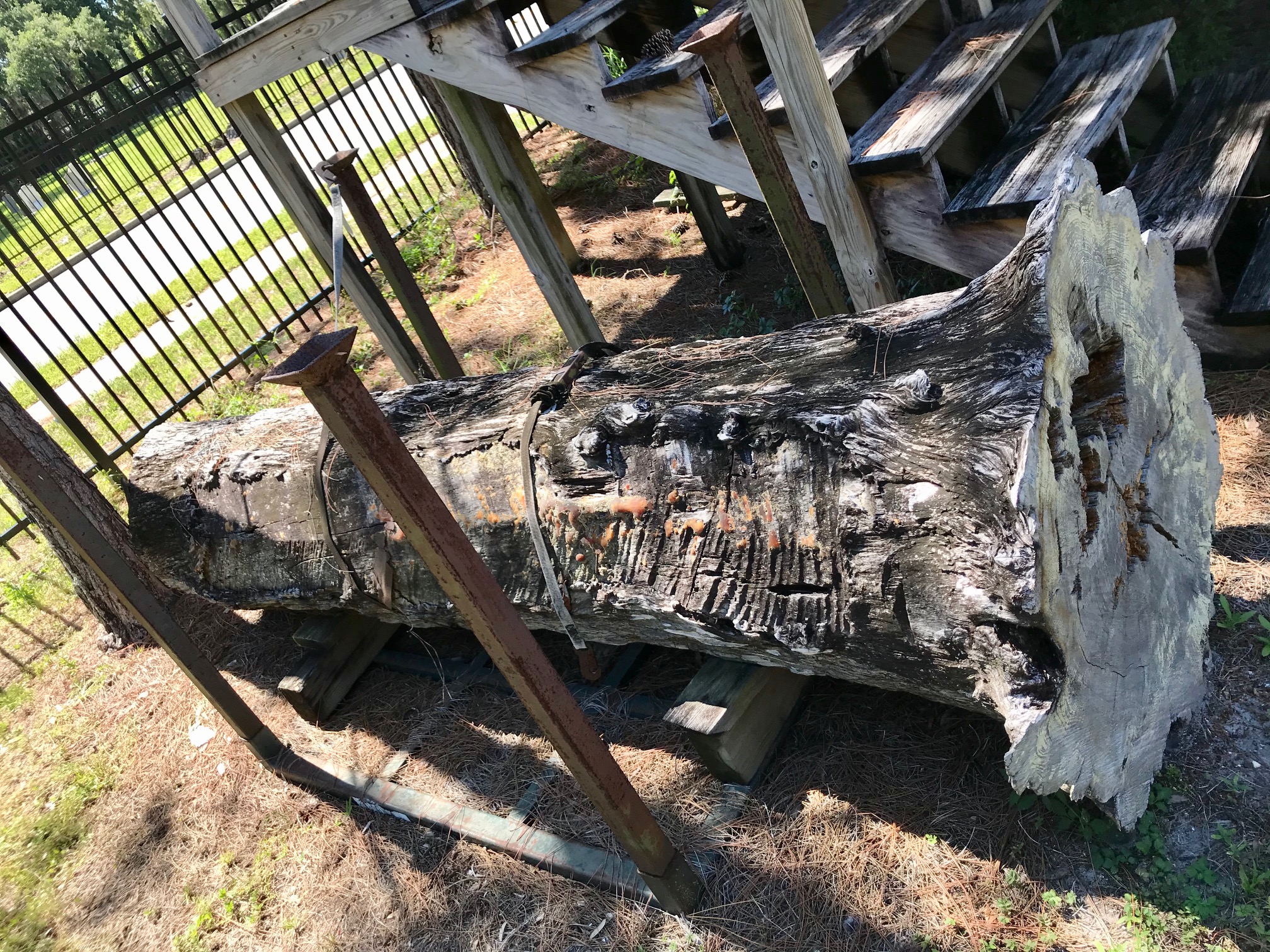 The turpentine industry, also called the naval stores industry, has been an important part of the United States economy since the settling of Jamestown. This industry dominated many regions of the South throughout the 1800s. Turpentine is distilled pine oil collected from long leaf and slash pine trees. These trees are only found in the coastal areas of the South Eastern United States. The turpentine industry produced pine tar, which was used to seal wooden sailing ships. Eventually, many other uses were found for turpentine, including as an ingredient in: kerosene lamps, shoe polish, Vicks VapoRub, and crayons.

Turpentine production started primarily in North and South Carolina. In the early days, collection methods were destructive to trees so the industry continued to move further and further south in search of more trees. By the late 1800s and early 1900s, Florida had become a major player in the United States turpentine industry.

The arrival of the turpentine industry in Florida helped develop many of the small rural towns in Florida today. Turpentine camps grew in small populated areas, bringing railroad lines, churches, schools, and homes.

Prior to 1865, many turpentine workers were enslaved African-Americans. After the Civil War (1861-1865) and the Emancipation Proclamation (1863), many African-Americans took jobs in turpentine camps as a source of income. However, a system of labor called "peonage" allowed employers to exercise control over their workers, essentially continuing slavery past emancipation. Peonage became known as debt slavery. Workers had to buy equipment and supplies from the camp for such a high price that they become hopelessly indebted to the company and could not leave. Peonage was made illegal by Congress in 1867, but in practice it continued until the 1940s.

Many workers lived in houses supplied by the camps and close knit African-American communities were formed. After Manatee County's Sidell and Bee Ridge turpentine camps closed, many of the workers moved to Sarasota’s Newtown community. The culture and music created by these communities were recorded by the Works Progress Administration and anthropologists like Zora Neale Hurston.

In addition to the peonage system, turpentine camps also resorted to the convict-lease system. Between 1860 and 1870, Southern states including Florida had a growing prison population. Florida struggled with maintaining the large amount of prisoners and the upkeep of maintaining prisons, so the state started the convict-lease system. Turpentine was a dangerous industry and finding workers who were willing to work in the camps was difficult. Florida’s turpentine operators often turned to leasing convicts for fixed periods of time for a fee. Early on, there were no regulations for care and treatment of these convicts was often cruel. By the late 1800s, the Florida Commissioner of Agriculture had taken over overseeing the convict leasing program,establishing care guidelines. The program ended in 1919.

Historical photos are made available by the Manatee County Public Library: https://cdm16681.contentdm.oclc.org/