The Eldridge shortly after the Civil War 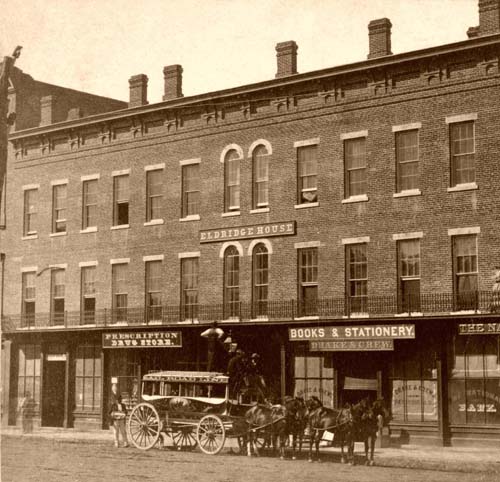 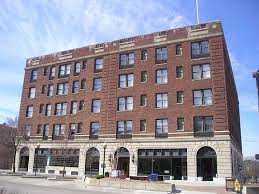 The third hotel build at this location-the Eldridge Hotel-was a leading Lawrence institution, as well as one of the finest in the state through the early 1900s. By the 1920s, however, the historic hotel lacked modern amenities and was beginning to show its age. In response, Lawrence businessmen under the leadership of Billy Hutson worked to construct a modern hotel at this location. The 4th hotel built at this location, the new Eldridge Hotel survived the lean years of the Great Depression but was once again in danger as consumer tastes shifted away from downtown luxury hotels in the late 1950s and 1960s.

The rise of inexpensive "motor lodges" proved more destructive to the hotel than Quantrill's raiders, and the Eldridge Hotel appeared to be gone forever when it closed its doors for the last time. According to the hotel website, this full-service establishment had never been closed before and a lock had to be made for it's front door. The building was converted to apartments, housing graduate students and others through the mid-1980s.

Fortunately for those in downtown Lawrence, and the future of the hotel, the city of Lawrence continued to invest heavily in its downtown. The city also avoided the trend of creating shopping malls-a decision that allowed Lawrence's downtown to thrive while other downtowns throughout the nation stagnated in the 1970s and 1980s. With the city's continued support of the downtown area, Lawrence business leaders saw the potential of creating a hotel as unique as its own downtown. In response, area developers purchased the historic building and brought the Eldridge Hotel back to life.