This is the First Baptist Church. It is believed to be the largest Baptist Church in Canada. That's a far cry from the seven members it started with in 1888. The building you are looking at is in its third location for the church, following a spectacular fire that destroyed the second one in 1905. The property was purchased in 1910 from R.B. Bennett. He was also part of a church fundraising group that included Calgary Mayor Thomas Underwood. The present church was completed in 1912 it was designed by architect D.S. McElroy and is one of Calgary's finest examples of gothic revival style. You can identify it by the pointed arches, gables, copper shingles, attached buttresses, and soaring 125-foot-tall spire. Inside are amber-toned stained-glass windows imported from Germany and a 42 stop-pipe organ that was built and installed by the famous Casavant Freres company of Saint Hyacinthe Québec. The sanctuary which seats 900 features a barrel-vaulted ceiling and grid of oak moulding. It is truly a prominent 4th street landmark. 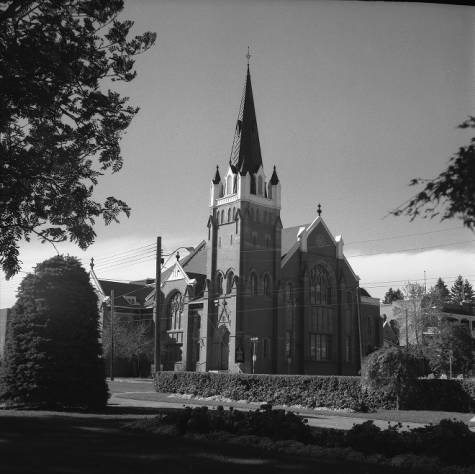