Item 9 of 10
This is a contributing entry for ALL...ABOARD! A History of the Railroad in Hopkinton and Contoocook, New Hampshire and only appears as part of that tour.Learn More.

In 1849, having departed from the train station in Contoocookville (as the village was then called) heading west, the first stop on the new Contoocook Valley Railroad was West Hopkinton. This line, having been built with the lumber provided by Hopkinton’s own citizen, Joseph Barnard, followed much of the Contoocook River. From the passenger car a rider could see farms, and fields, woods and homes. The river was an integral feature for the residents of the community. It was the Contoocook River which provided the energy to power the saw mills, grist mills and other industrial mills which could also be seen along the railroad. At a bend in the river, near the western border of the Town of Hopkinton, a small station was built to provide access to the railroad for passengers and freight. The West Hopkinton station was positioned on the north side of the river, just at the junction of the Rowell Bridge which provided access to the opposite side of the river where many of the mills were built. West of the station, on the river, a dam had been built to better harness the water power for industries. Continuing west, the railroad passed into the next town, Henniker, stopping, then continuing on, making its final stop at Hillsborough Bridge. It was at Hillsborough passengers and freight would soon be able to make connections to Peterborough and beyond. The return trains, those heading east to Contoocookville, allowed passengers and freight a connection to the, also new, Concord and Claremont Rail Road providing access to markets well beyond the confines of Hopkinton, or even Merrimack County.

Image of the West Hopkinton station. 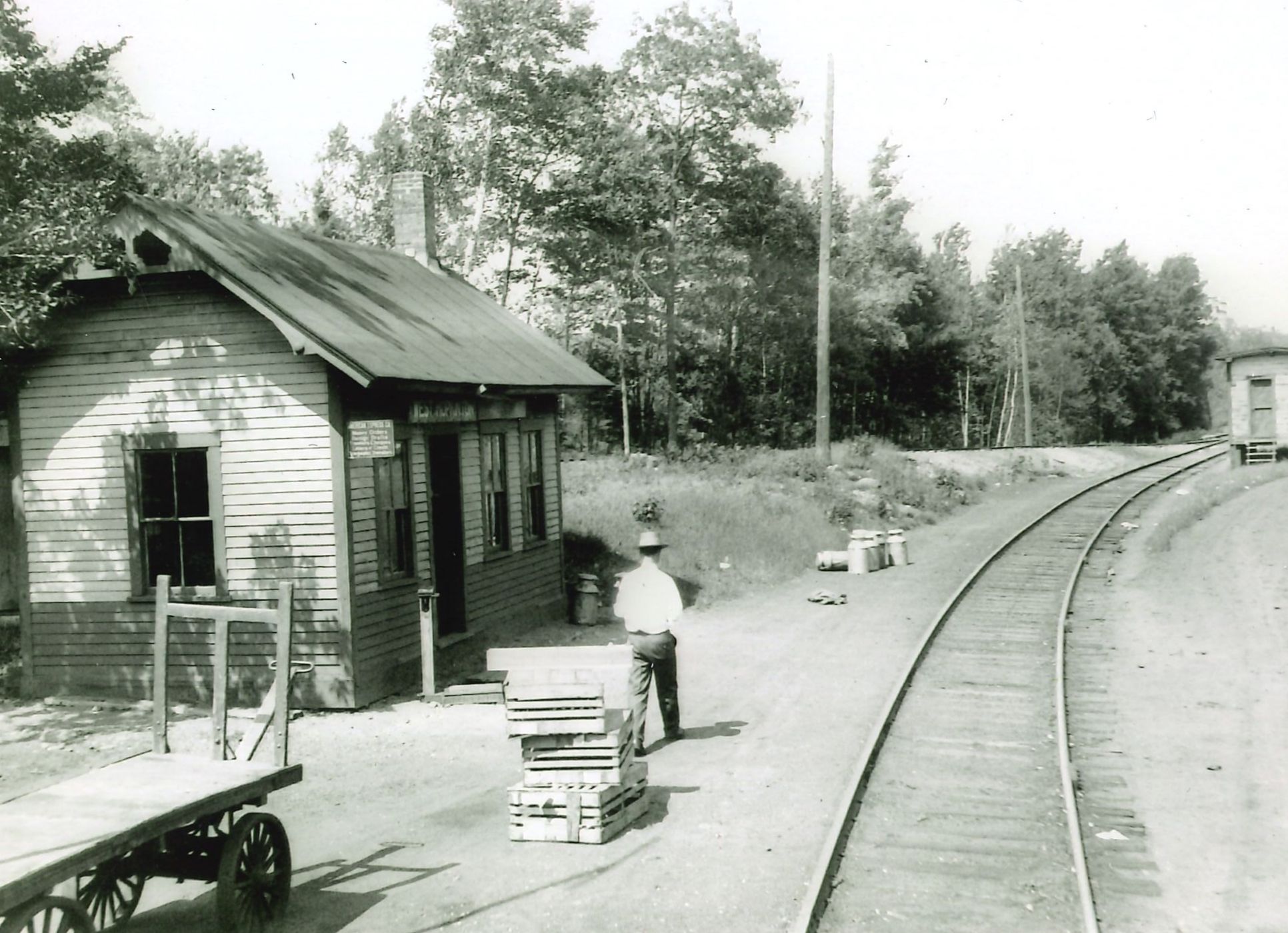 Image of the West Hopkinton station relative to the Rowell Covered Bridge. 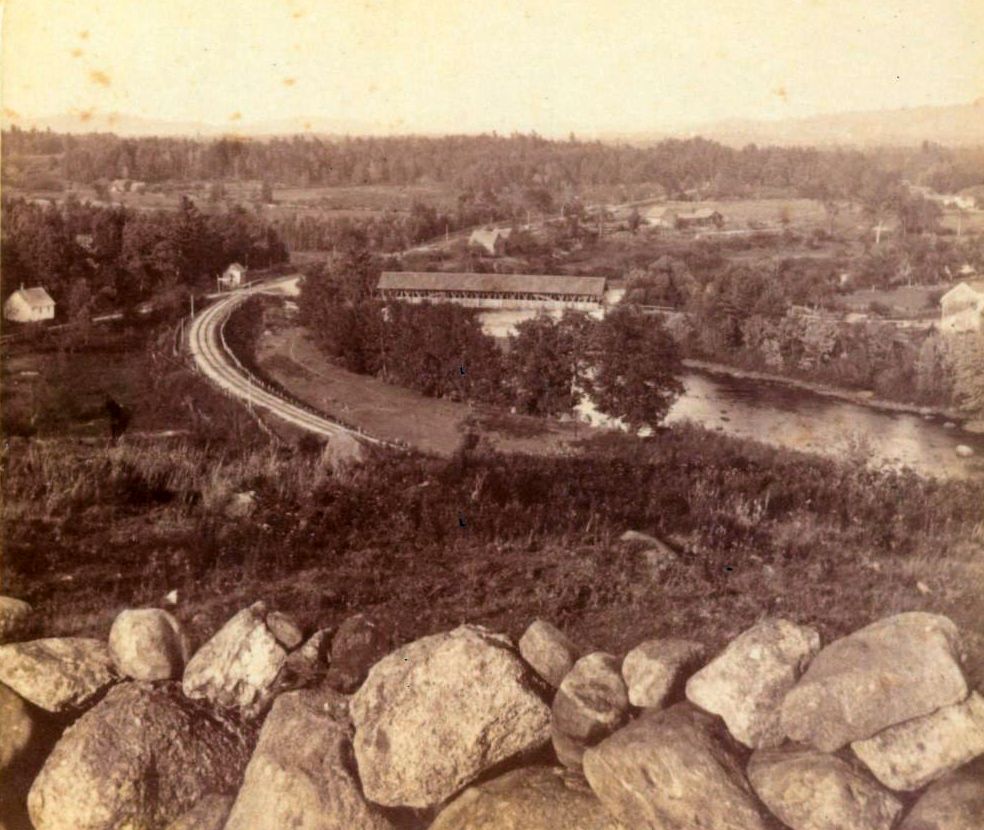 Photograph of Henry Chase Davis, one of the owners of Davis Paper Company in West Hopkinton. 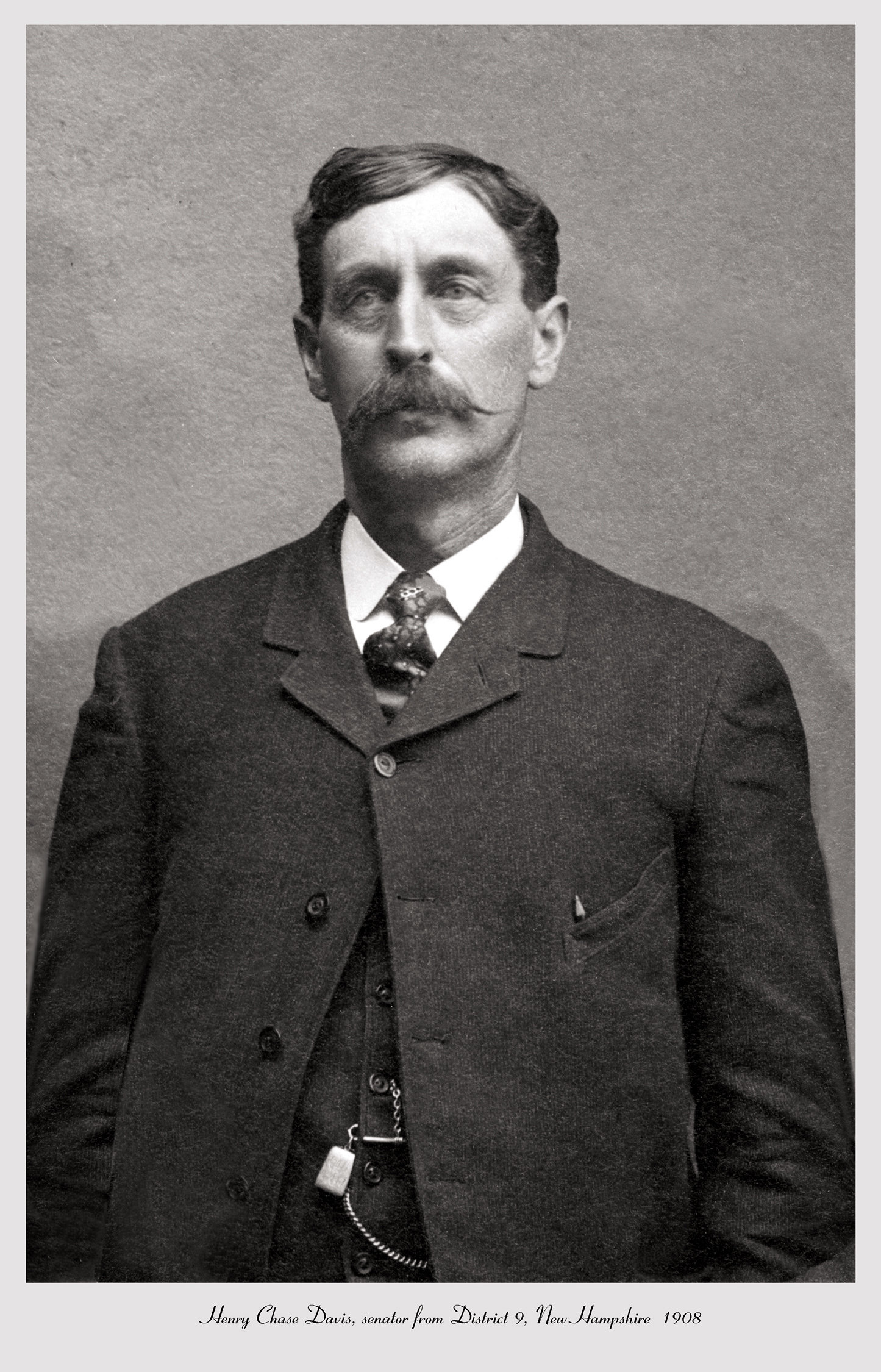 An early 20th-century postcard with a colorized photo of the mills at West Hopkinton. Visible in the foreground are the railroad tracks that delivered fuel to the facility. 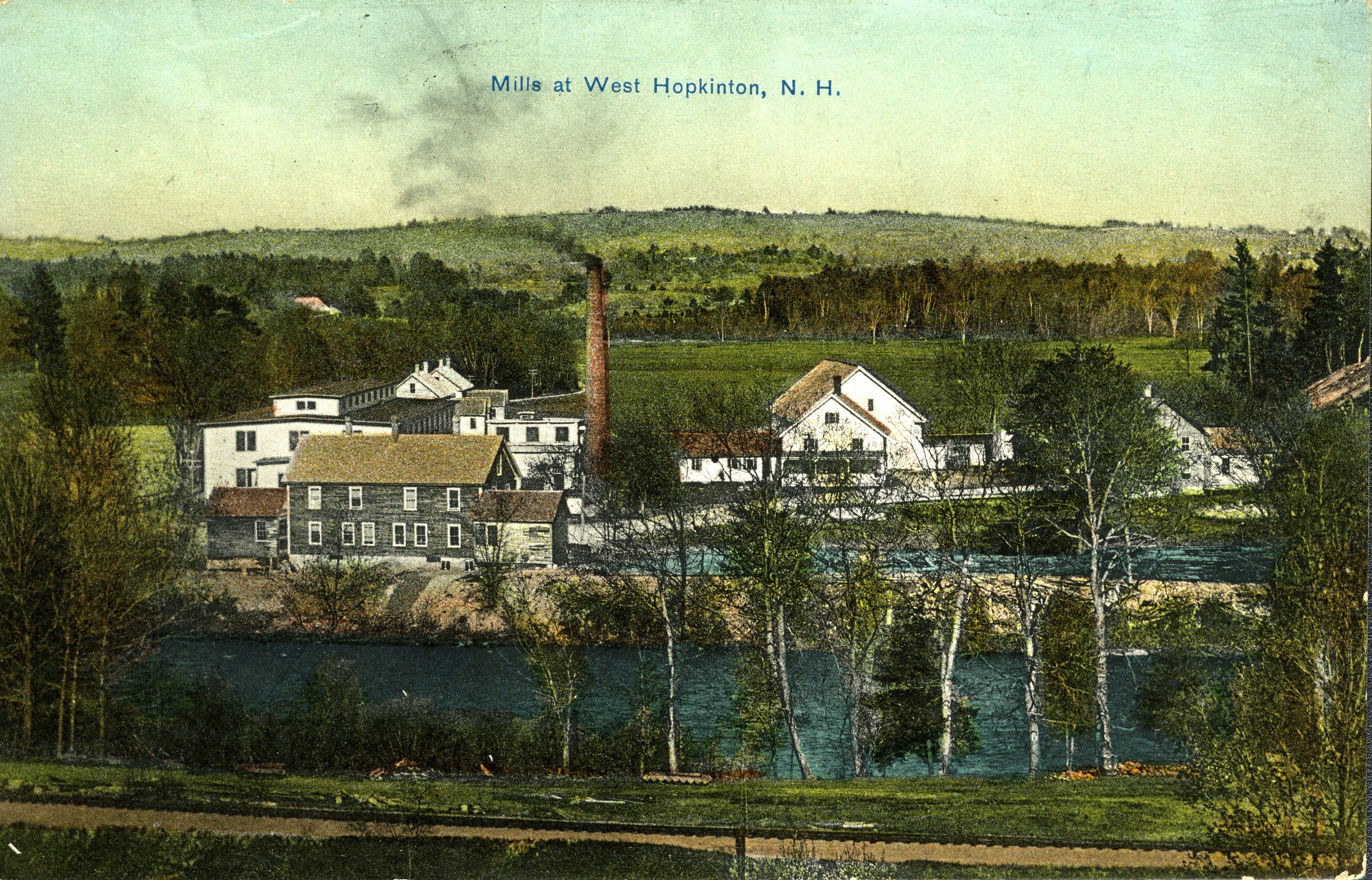 Image of West Hopkinton before construction of the Hopkinton-Everett Dam. 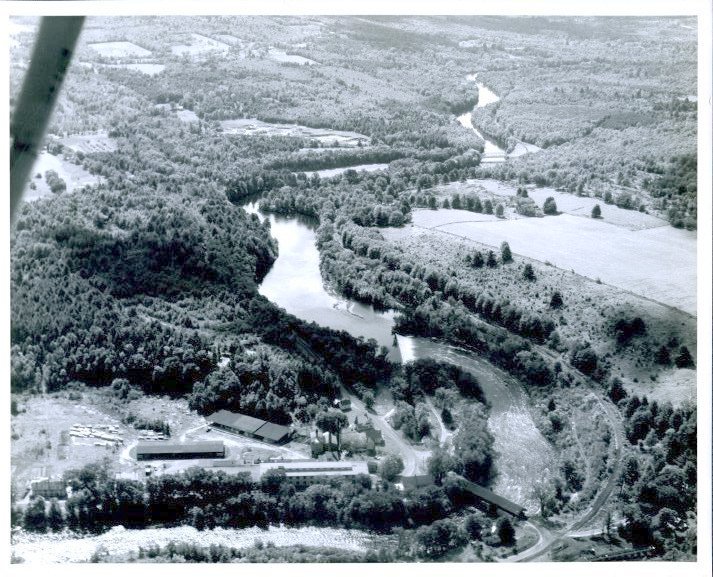 Image of West Hopkinton after construction of the Hopkinton-Everett Dam. 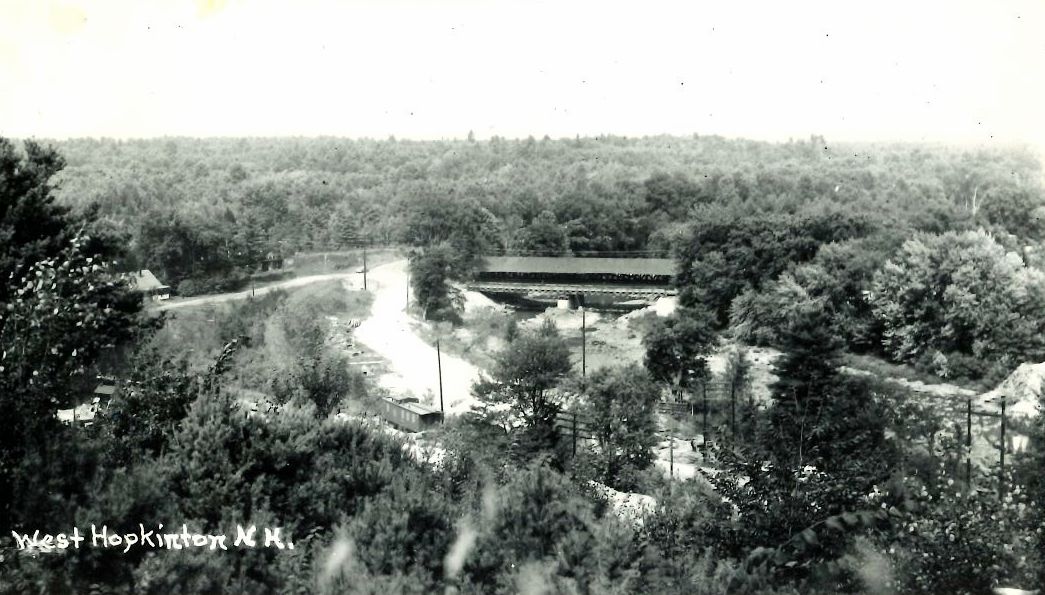 The area along the Contoocook River at West Hopkinton has been the site for several mills since early in Hopkinton’s settlement. The bend in the river and the drop in elevation adds to the power the river provides to turn the wheels to saw lumber and grind grain. With the introduction of the railroad through this area in 1849, transporting goods beyond the Town’s borders to new and larger markets became feasible.

But the mill that had the biggest impact on the area was the paper board and leather board manufacturer – Davis Paper Company. In 1906 Henry C. Davis and his brother Horace J. Davis, having recently sold their mills in Davisville, bought the Rowell family farm and the water rights from Frank H. Carr, with the intention of building new mills. The mill buildings would contain state-of-the-art manufacturing machinery; a new dam was constructed; tenement housing for workers was built; and electricity and telephone were brought in. In addition to these buildings, the Davis’s built a warehouse on the opposite side of the river, next to the railroad station.

The railroad company, by then owned by Boston & Maine Railroad, added new side tracks to accommodate the shipping of finished goods and the receiving of raw materials. Taking more than two years to complete, it was such an accomplishment that the Davis’s opened the mills to the public for a night of dancing and music. A special train was hired to carry people to and from the festivities. By several accounts, it was a most exciting celebration with between 500 and 600 people in attendance from several towns.

The Davis Paper Company changed the character of West Hopkinton, bringing in a new population of workers with their families, who needed groceries and sundries which they could buy at the Davis General Store. The West Hopkinton Post Office moved into the store too. And the children attended school in the one-room school house across the covered bridge, near the railroad station. West Hopkinton was a busy community in the early 20th-century.

In 1947 the Davis Paper Company was purchased by Hoague and Sprague which produced cardboard.

Much of the landscape has changed in West Hopkinton since the building of the Hopkinton-Everett dam project by the Army Corps of Engineers, which began in the late 1950s. Many family farms were lost due to the construction of the dam and related reservoir and spillways. Portions of roads connecting neighborhoods, such as Bassett Mill Road, were removed. Others, such as routes 9 and 202, were rerouted, while sections of railroad track towards Henniker were removed. Additionally, the Stumpfield Cemetery had to be relocated.

The justification for such upheaval was that the Contoocook River, which had caused major flooding many times over the centuries, had again caused significant flooding twice in the 1930s. In 1936 flooding was caused by severe storms and in 1938 by a hurricane. The floods left roads washed out and much of Contoocook Village flooded, with the covered railroad bridge suffering significant, though repairable, damage. The floods also wiped out the railroad bridge to Henniker, ending rail service from West Hopkinton to Henniker. By the time the dam project was started, twenty years later, the only train service to West Hopkinton was freight, bringing in coal, via Contoocook, to power the remaining mill, until it converted to oil. By 1962, the dam construction was completed and the last railroad delivery to West Hopkinton had been made.

The history of Hopkinton’s railroad covers a little more than 100 years – from the first passenger train arriving in Contoocook in 1849 to the last freight train delivering coal to the paper mill in West Hopkinton in 1962. It brought tremendous change to our area – to the physical landscape, the markets for our agricultural products, and our ability to get from one place to another.  It also brought changes to wealth distribution, land ownership (eminent domain), and transient populations. Some of the changes were positive; others were less so.

Below are several questions to think about and discuss. There are not right or wrong answers to them. They are starting points to spark discussion about current experiences and lessons learned, if any, from history.

We hope you have enjoyed our driving tour. We would love to hear your memories of train trips, or watching trains go through town. If you have images or stories you would like to share, or would like more information about Hopkinton Historical Society, please contact us at 603-746-3825, nhas@tds.net, or www.HopkintonHistory.org.

Would you please complete a brief evaluation of the driving tour? Please click here to go to the evaluation.