Item 5 of 10
This is a contributing entry for ALL...ABOARD! A History of the Railroad in Hopkinton and Contoocook, New Hampshire and only appears as part of that tour.Learn More.

Throughout the second half of the 19th century, New Hampshire’s farming towns lost population as its residents relocated to cities for better paying factory jobs or out West or South for easier farming opportunities. The contents of the abandoned homesteads were auctioned off, while the homes remained vacant and the fields unplowed. Many of these abandoned homes eventually collapsed into cellar holes, and brush reclaimed the fields. To encourage New Hampshire’s native born to return to their birthplace, New Hampshire Governor Frank Rollins in 1897 called upon the New Hampshire Board of Agriculture to coordinate a new event to be called Old Home Week. He had specific goals in mind: he wanted native born to return and buy the many abandoned farms in the state for summer homes, and he wanted them to donate money to spruce up the village commons, libraries, and meeting houses. Locally, beginning in the mid-1880s, the natural beauty of Hopkinton began to be recognized. Taverns became summer boarding houses, grand homes were bought as summer residences or leased to summer visitors, and farm houses took in borders for periods of days, weeks or months. In the mid-1900s, young people spent time at overnight camps in Hopkinton. The trains helped make the appealing lifestyle of the small town accessible to city dwellers.

Cyanotype of Perkins Inn that was located in Hopkinton Village. 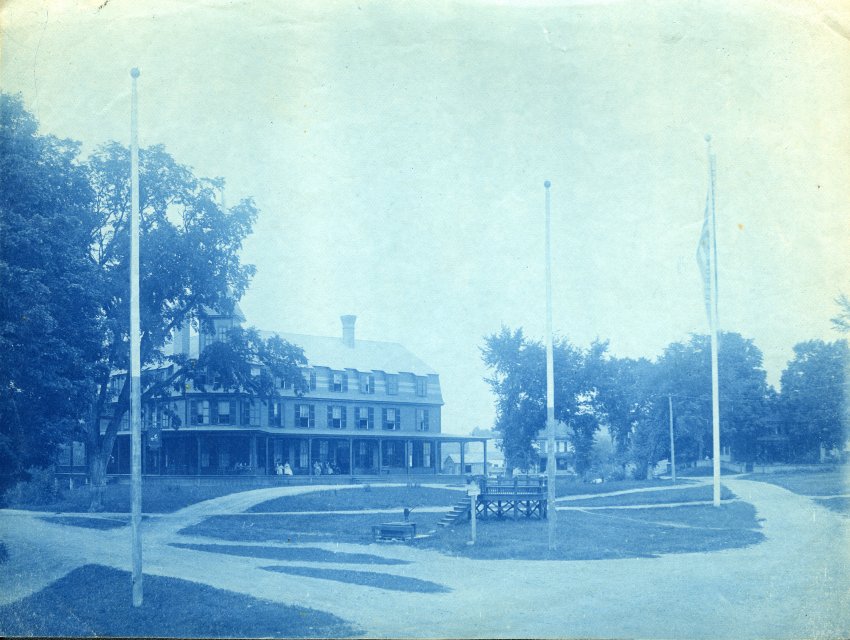 Cover of Perkins Inn advertising brochure with image of the inn. 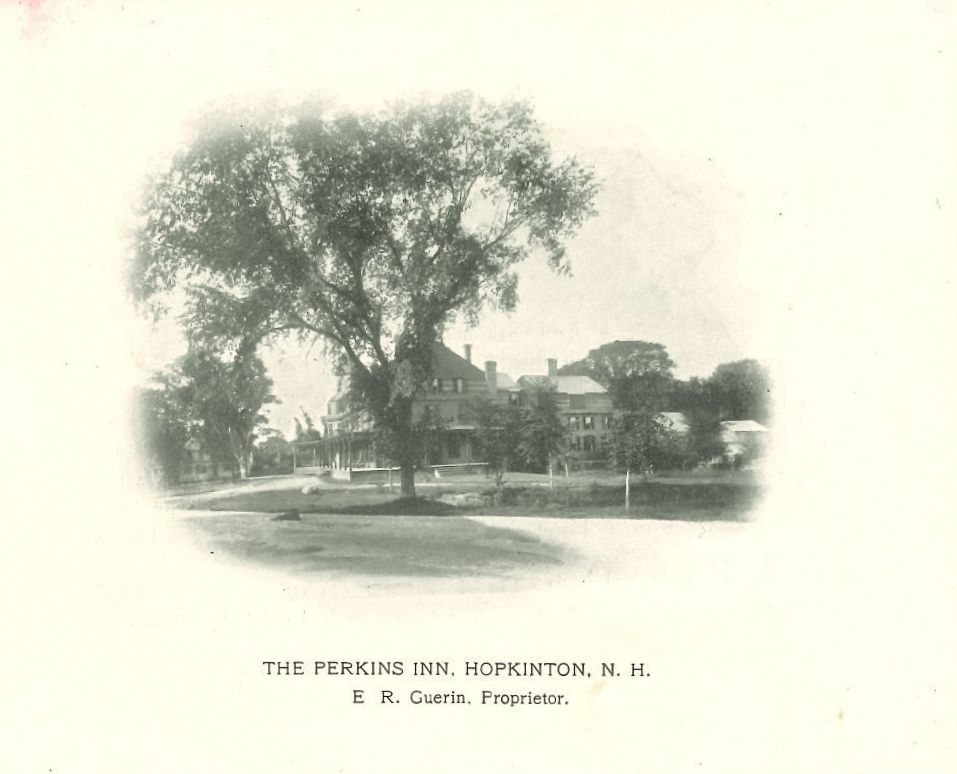 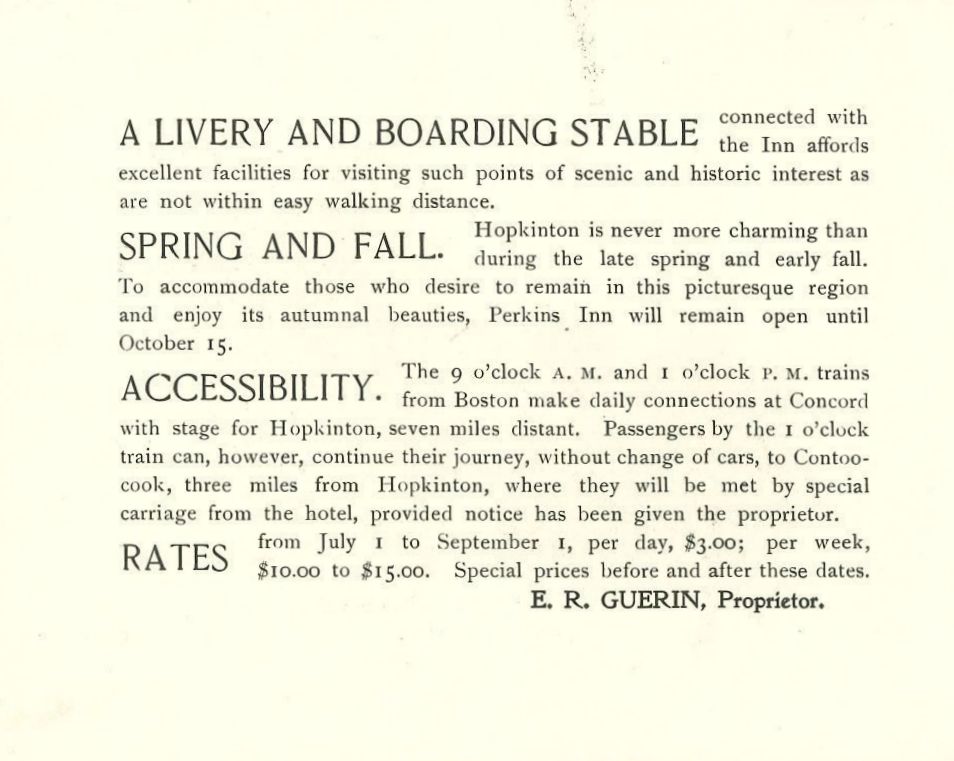 Advertising flyer for The Rolfe Pond House of Hopkinton, N.H. 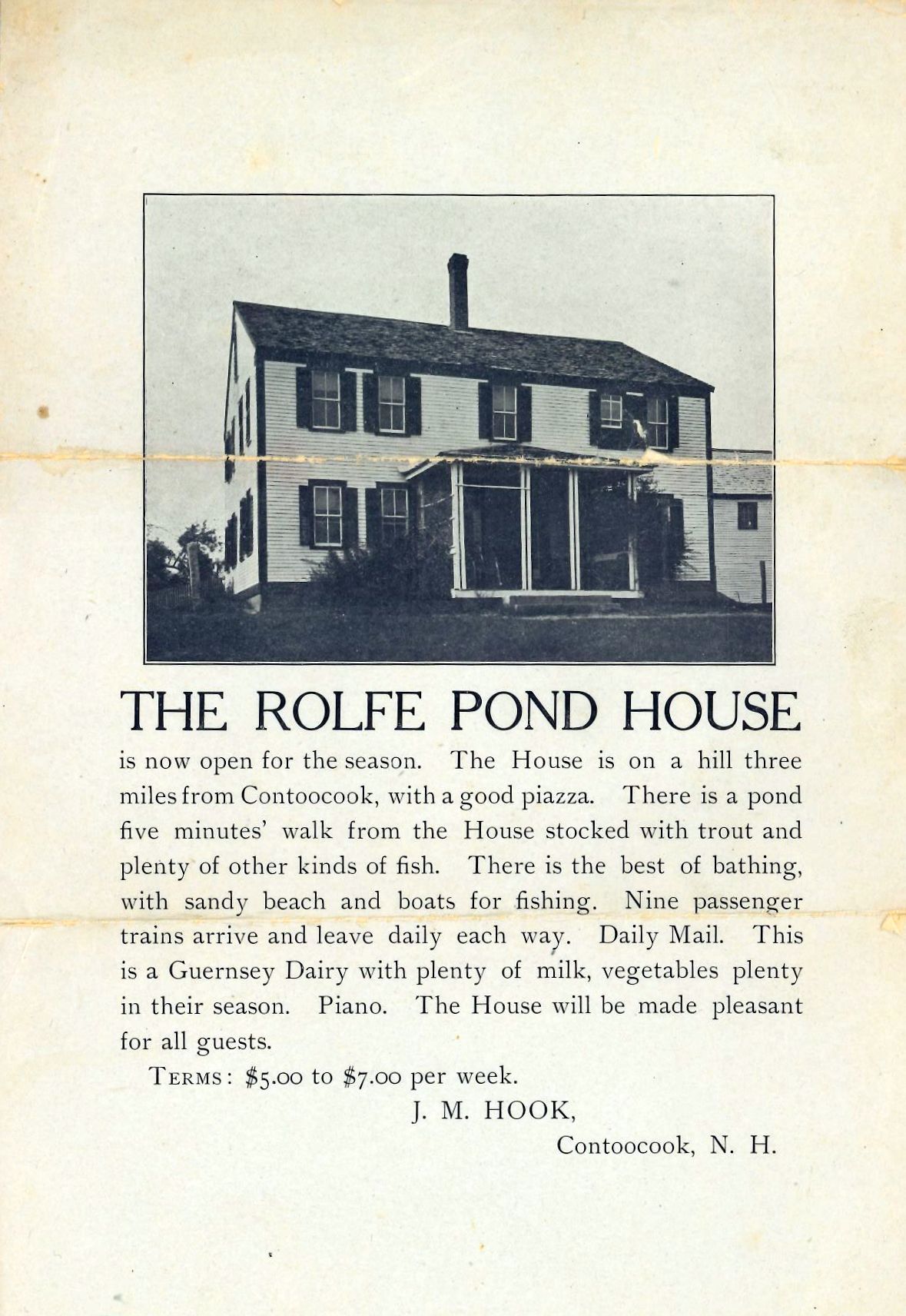 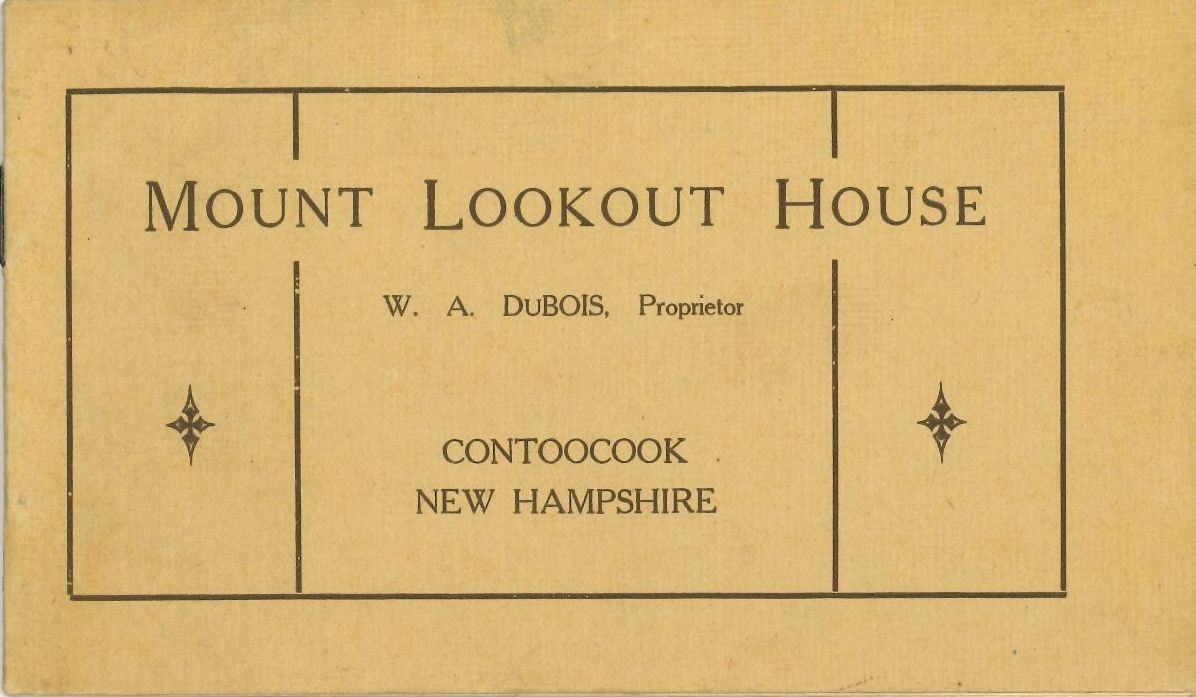 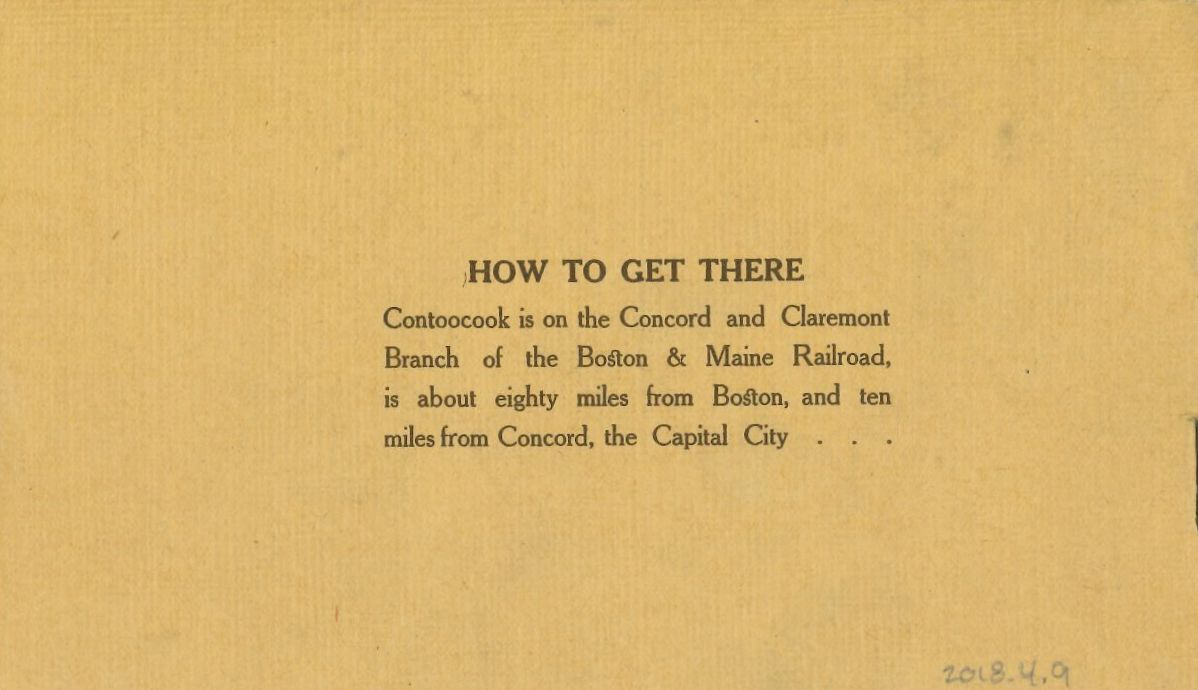 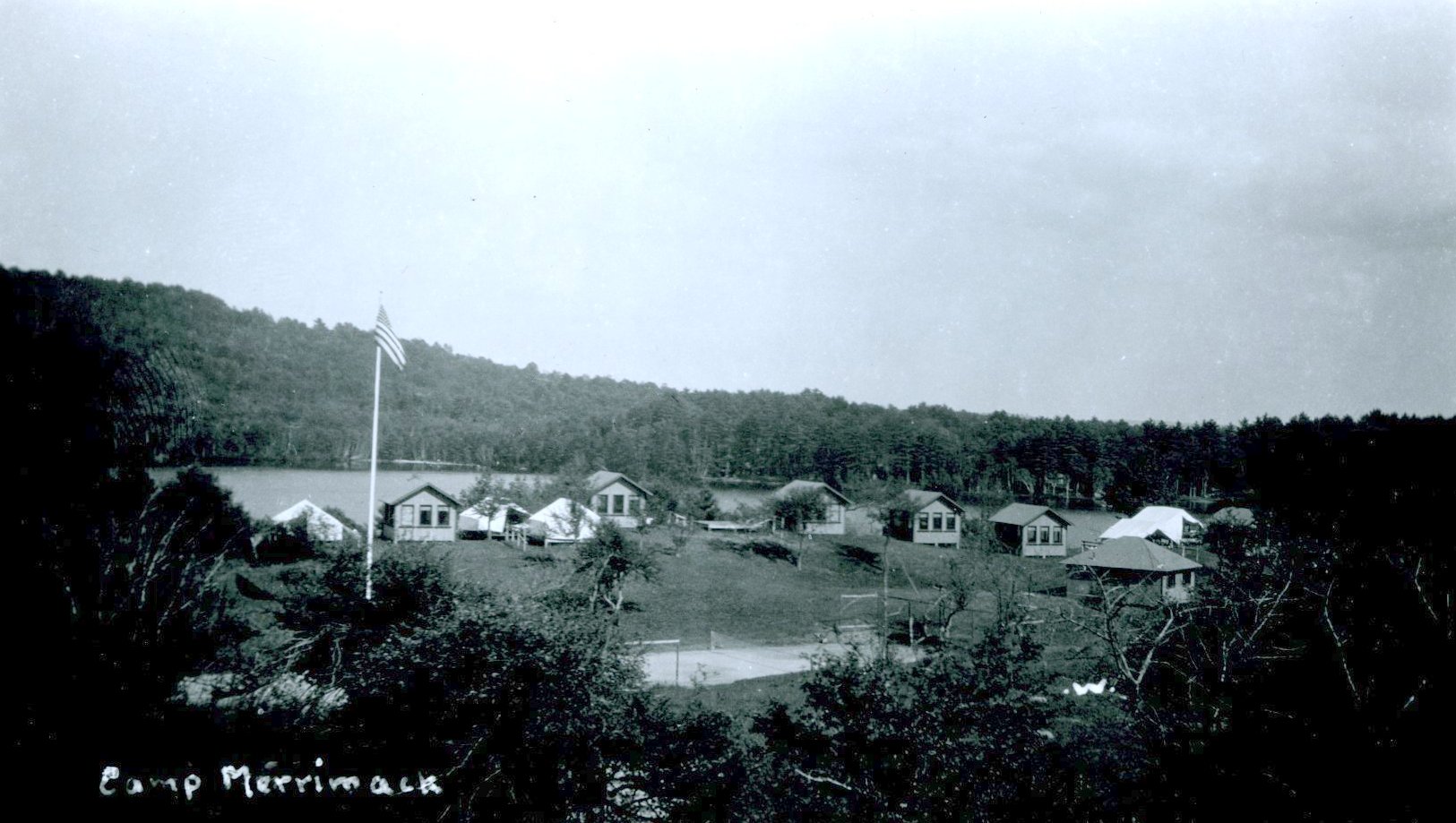 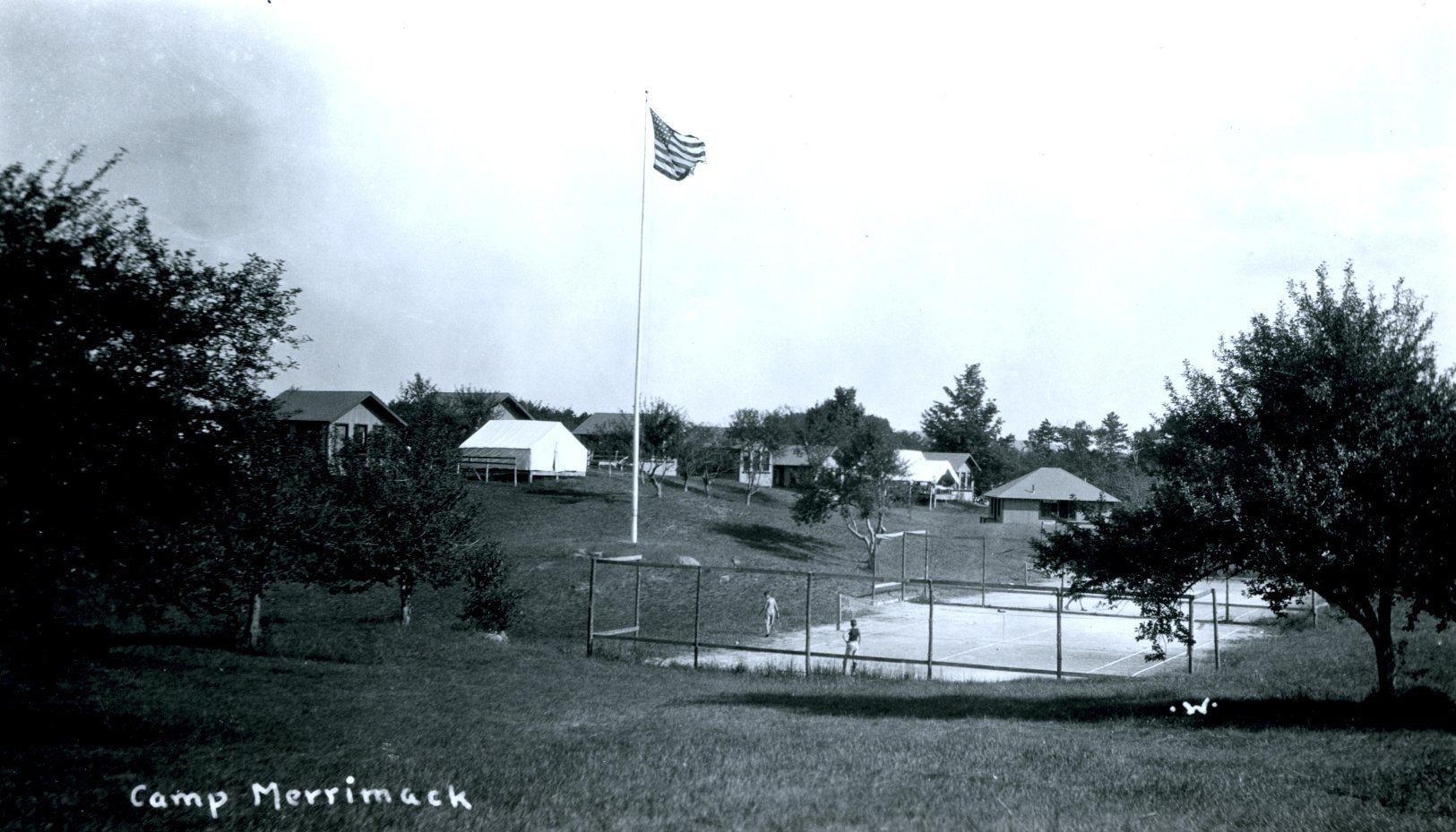 One such hotel was the Perkins Inn, located on the Village Green of Hopkinton Village. Its advertising highlighted the easy accessibility by rail, as did other inns in town. Unfortunately, the Perkins Inn was leveled by fire in 1907.

In 1914, the Contoocook Board of Trade published, "Contoocook Its Business Advantage and Natural Beauties," a booklet describing the many advantages of visiting or relocating to Hopkinton. One section, titled "Hopkinton as a Summer Resort," reads as follows:

There is not another place in all New England that can offer as much to the vacationist as Contoocook. Nor is there one as accessible or centrally located.

...Remarkable views may be had from many of the roads leading over the surrounding hills. From the summit of Mount Lookout and Putney Hill an uninterrupted view of valleys, distant hills and mountains can be obtained...

Camp Merrimack, located in the area formerly known as Cloughville, was established as a summer camp for Jewish boys in the early 20th century. It changed ownership in the mid-1950s and operated for a number of years as a general summer camp. Today the property is owned by the Greek Orthodox Metropolis of Boston and is operated as a year-round camp and retreat center.

Ken Smart of Hopkinton, who worked for the railroad from 1947-1952, remembers the hectic summer months at the Contoocook Freight House:

The summer months were the busiest as we dealt with the coming and going of the campers of Camp Merrimack and the additional summer boarders that came to town by train. It seems like the freight house [located where TD Bank is today at 884 Main St, Contoocook, NH] would be filled with trunks and duffle bags that all had to be weighed and tagged around July 1 and again the end of August.