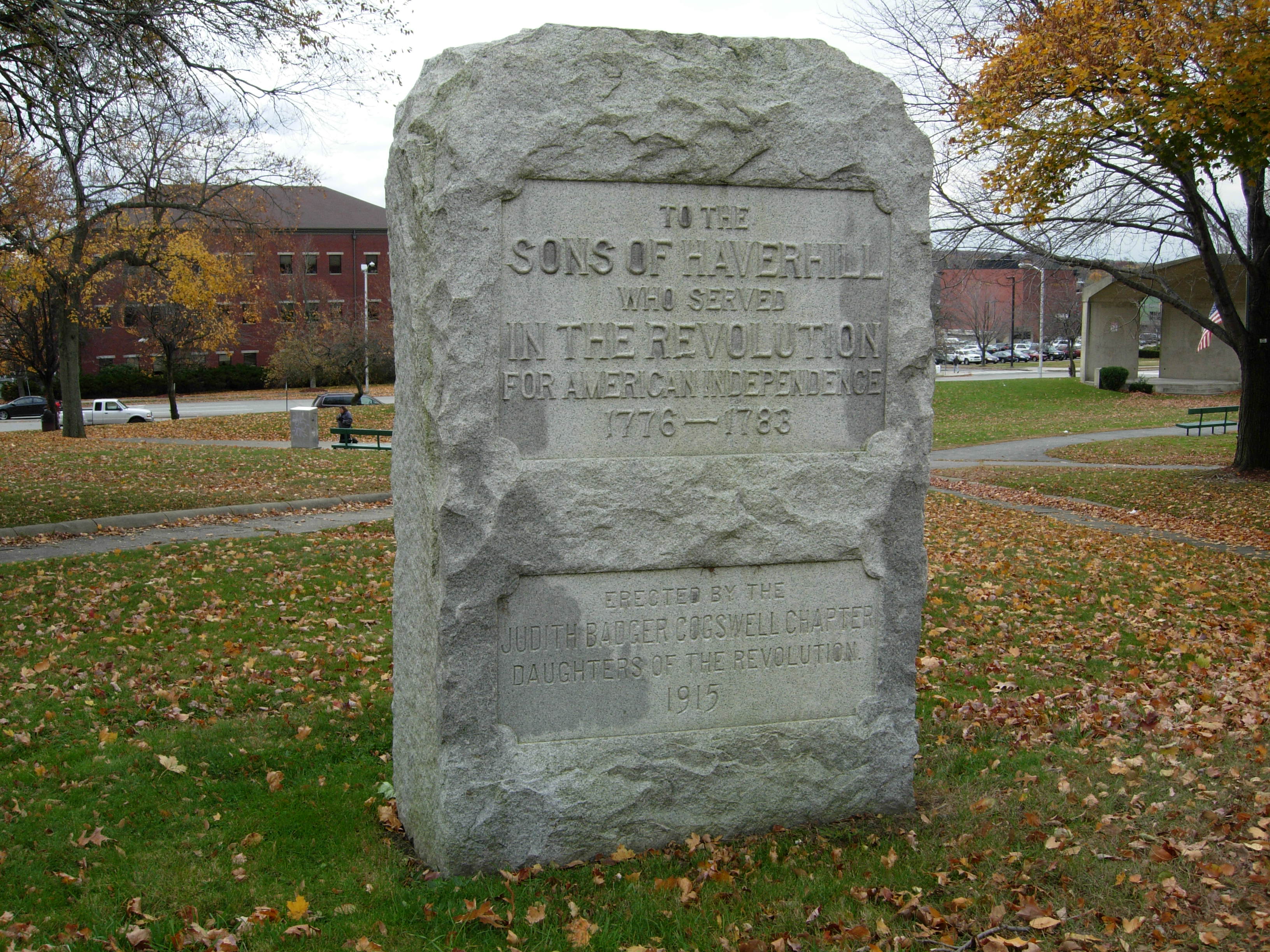 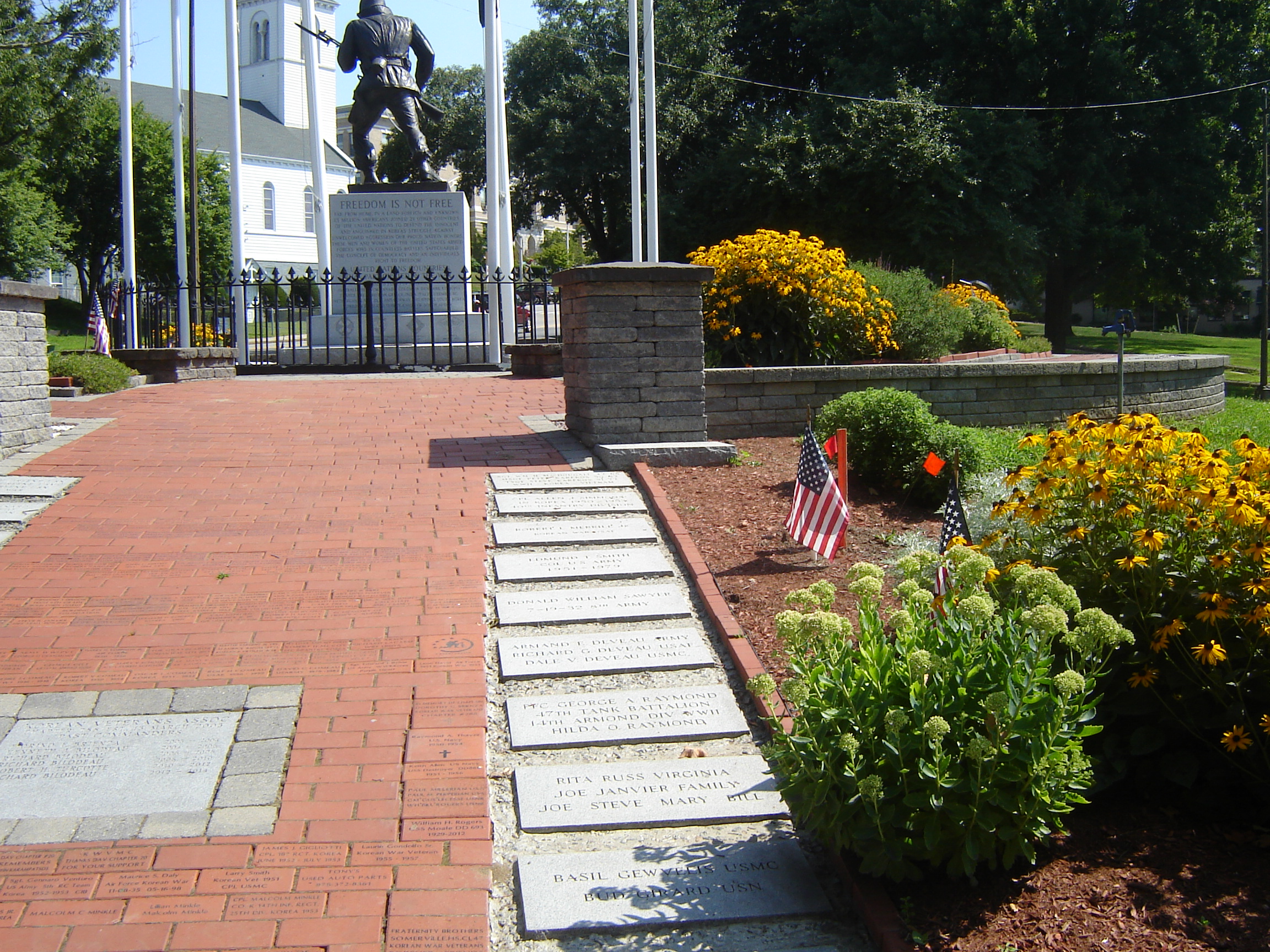 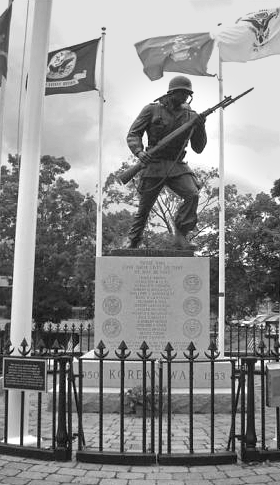 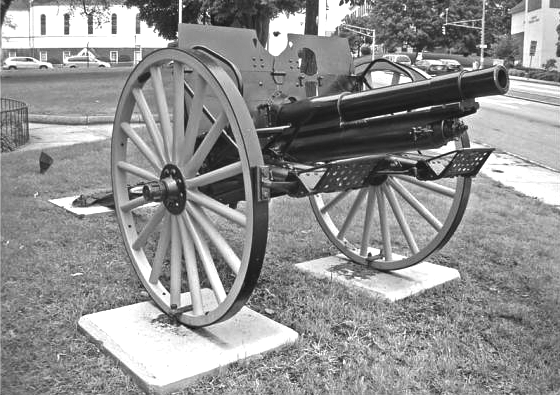 In 1654, GAR Park was called the Great Ox Common and for many years it was used for grazing animals and as parade grounds for the local militia. Town records later referred to it as City Hall Park before its dedication as GAR Park in 1925. Even before the park's dedication as GAR Park, it had served as location for city monuments.

Hannah Dustin is believed to be the first woman in America to be honored with a statue. The first statue of her, erected in Haverhill in 1861, was never fully paid off and was actually stripped and resold to Barre, MA as a Civil War memorial. This second one, located here at GAR Park, was installed in 1879, this time underwritten by philanthropist E.J.M. Hale. At the statue's dedication, Hale stated that the monument's purpose was to remember Dustin’s “valor” and to “animate our hearts with noble ideas and patriotic feelings.” Though the Hannah Dustin Monument is not technically a war monument, it is interesting to consider it in relation to the series of Indian Wars leading up to the French and Indian War.

Erected by the Judith Badger Cogswell Chapter of the Daughters of the American Revolution in 1915, this monument commemorates our nation’s first war. The 20 ton boulder (monument) was hewn from the hills of New Hampshire, being quarried and cut by Elmer S. Atwood at his quarry in Milford, New Hampshire. It was shipped to Haverhill by the Boston & Maine railroad and hauled by horse driven (eight horse team) dray to its present location. The boulder itself is nine feet high, five feet across, three feet thick and stands upon a base of solid cement six feet deep. A copper box 11 feet by seven feet with a depth of six feet was placed under the monument; it contains portraits of Abraham Lincoln, President Woodrow Wilson, George Washington, Thomas Jefferson, Paul Revere, U.S. Grant and other noteworthy Americans. The box also houses a 1915 Farmer’s Almanac along with other mementos related to war veterans. The sitting president, Woodrow Wilson was invited to attend the dedication but sent his regrets.

This cannon was originally used for coastal defense of Narragansett Bay and was given to the city at its request. It honors the veterans of the Spanish-American War, and in 1973 is was nearly lost for good. A contractor was working at City Hall. He parked his truck pointing south on Main Street and though he claimed to have checked the tires, the driverless truck headed down Main Street (Route 125). The truck jumped the curb at GAR Park and slammed into the cannon. The cannon’s wheels and trunnions (the “handles” on the side of the cannon) were severely damaged. Someone at City Hall authorized the damaged cannon’s sale for scrap at Tombarello and Sons Junkyard in Lawrence, Massachusetts. Several citizens objected, including Gary Herbert an Atkinson resident who had grown up in Haverhill. Herbert made a deal with the Haverhill Mayor George Katsaros to repair the cannon and the cannon was trucked to Herbert’s rented home in Atkinson, New Hampshire. When it was discovered it would cost $600 to repair each wheel along with an additional cost for repairing the trunnions, the city’s insurance company refused to pay for the repairs, and the project stalled. Only Herbert and Katsaros knew where the cannon was being kept and in the ensuing years, Herbert bought a new home and moved, and Mayor Katsaros died. All the while, the cannon sat behind the barn slowly being covered by weeds and debris. In the fall of 1985, a hunter stumbled upon the cannon, recalled reading a newspaper story about the cannon’s disappearance, and made the connection. Because of his discovery the cannon was refurbished and rededicated in its present location.

Monument to the Major How Post of the GAR

This is the memorial that was unveiled at GAR Park’s dedication in 1925. It consists of circular benches surrounding a plaque honoring the Civil War veterans, as well as a pair of drinking fountains two and a half feet from each end of the benches. The monument with its seats was actually moved to the entrance to Winnekenni Park for more than 15 years while relocation work on Route 97 was underway and then were returned to their rightful place in 1973. In 1974 the Band Shell behind the benches was dedicated and added to GAR Park.

In 1996 the Haverhill Korean War Veterans Chapter 288 began a mission to raise more than $105,000 to pay for the monument that stands at the top of GAR Park. Besides raising the funds they were very much involved in the design of the monument. The Korean veterans also gave presentations at local schools to educate students about the “forgotten war.” During a six year campaign they raised money from donations from the local population and business community. The sale of engraved bricks and granite blocks which were incorporated into the monuments construction and a dinner-dance helped raise the remaining $30,000 for

its completion. The Demarais Post VFW secured the design from Haverhill architects Garry Sharpe and Daniel Nadeau, and it was built by the same family business (Atwood’s Memorial) that built and designed the World War I Monument. The engraved bricks and granite blocks bought during fundraising were laid by Tri-Ad Associates.

The monument was dedicated November 3, 2002, 50 years after the outbreak of the war. It stands 15 feet tall, including a nine foot statue of a soldier holding an M-1 rifle, surrounded by eight flag poles: five symbolic of each branch of the military and the other

three flags for state, country, and the United Nations. The monument honors the memory of 16 Haverhill residents who died in the conflict, along with the names of another 842 men and women from Haverhill who served in Korea. Before the monument was built, a simple plaque in City Hall honored the 16 who had sacrificed their lives.

honored their deeds. One committee member (Fiorino F. Brienza) joined the war effort and was shipped to Korea five days after the birth of his first child. He served 11 months on the battlefield during which time he became a squad leader and earned three Bronze Stars, a Purple Heart and Company Infantry Badge with three stars. On the monuments dedication he said, “The monument will be a firm reminder that democracy is not lost and that those who fought did not die in vain.”

The latest monument completed in Haverhill is located across the street from GAR Park in front of the library.