The Hiker at Gale Park 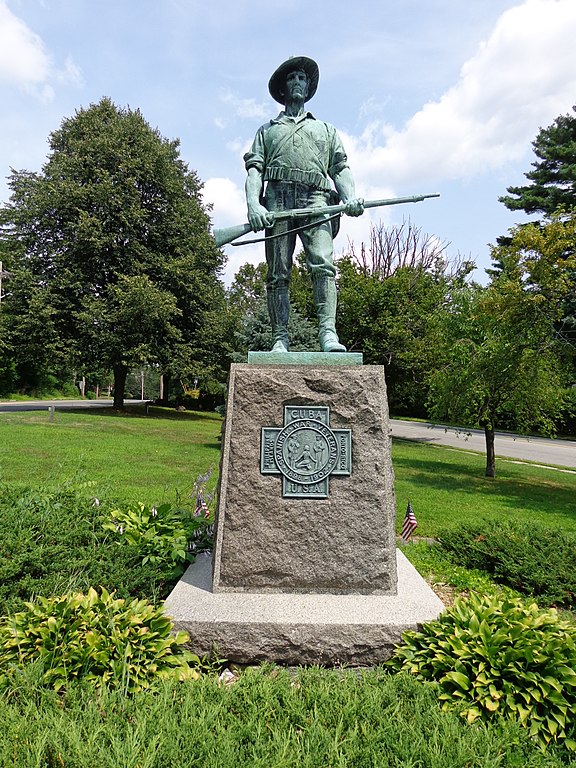 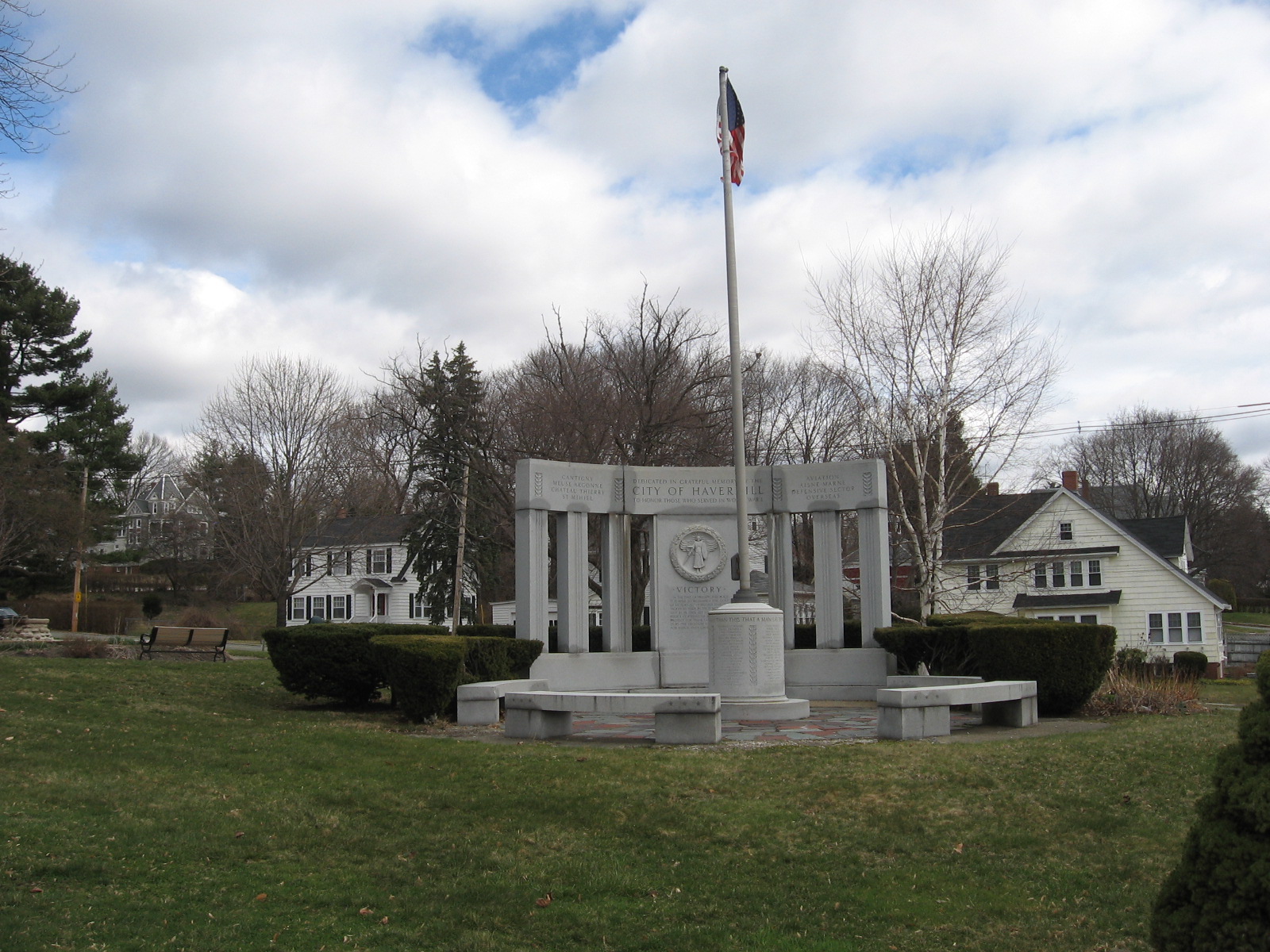 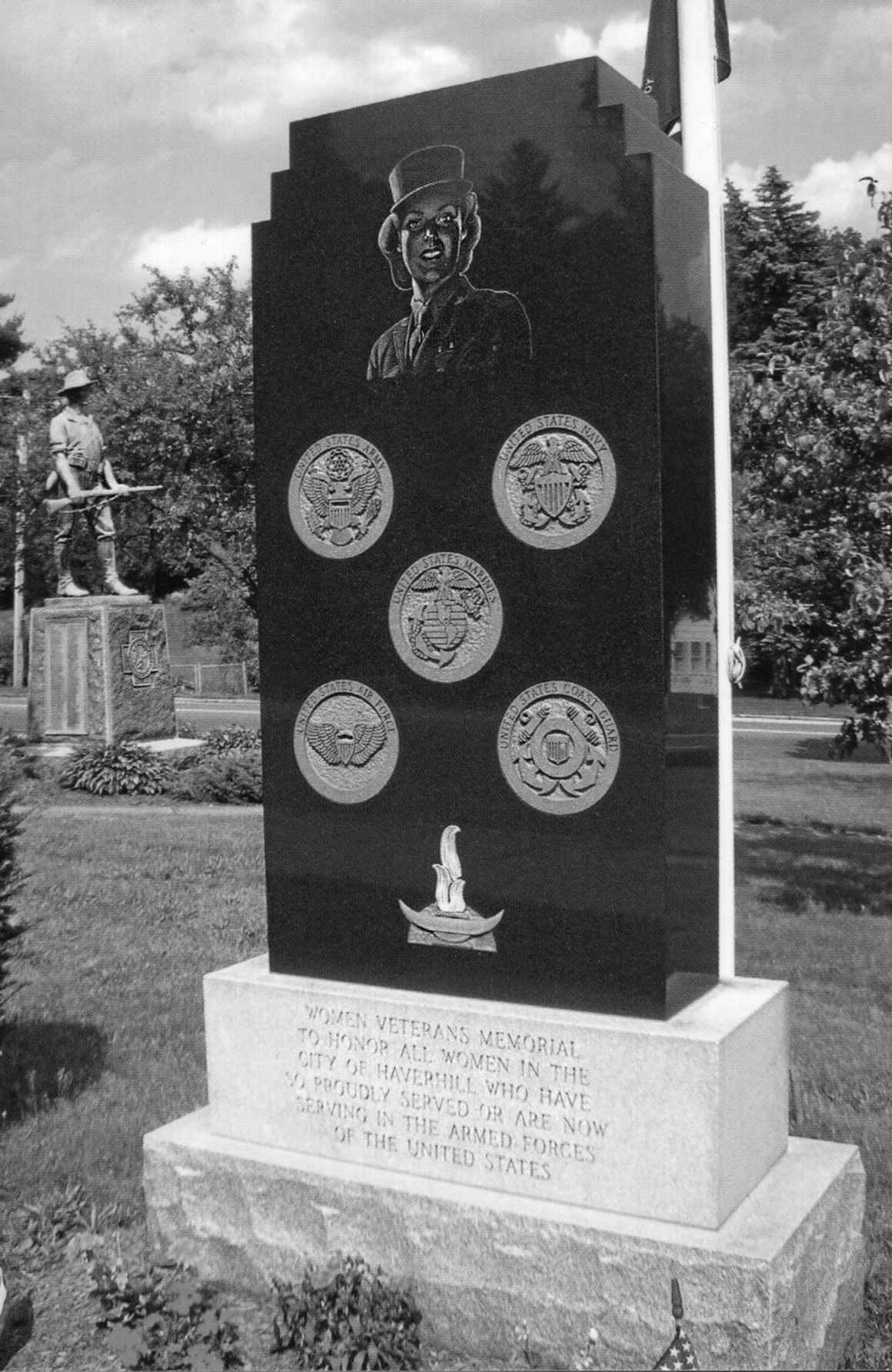 Gale Park is originally the site of the Ayer House, a structure built in 1712 by Capt. Samuel Ayer. In 1872 it was sold to the Haverhill Children's Aid Society and became an orphanage called the Children’s Home. In 1884 the Children’s Home was moved to the Gale Building, and the Ayer House was torn down in 1891. After the demolition, this area became Gale Park and a fountain was installed in 1892 as its centerpiece. This fountain was later moved to the shores of Kenoza Lake where it remains to this day. Another, smaller fountain was later installed

This beautiful granite monument honors those who served their country in World War I; however it's journey to existence was a long one. The city of Haverhill and its World War I veterans made several attempts to build a memorial to honor those who served their nation during the “war to end all wars” but always seemed to run into stumbling blocks. Initially the city wanted to honor the veterans by giving scholarships to Haverhill and St. James High School’s graduating seniors. The Haverhill Gazette wanted to build a pool and dedicate it to their services. Both ideas were rejected by the veterans. A compromise was reached when the veterans and city decided to refurbish Tilton Tower and make it the city’s World War I monument. Over $100,000 was allocated for the project and plans were drawn up for the memorial. However, before work could begin the Stock Market Crash of 1929 struck and put the project in limbo.

In 1956, after over a quarter of century of debate, the Haverhill War Memorial Commission finally decided to erect a monument. After considering four sites, the monument's location was narrowed down to either GAR or Gale Park, with this site winning out. Eight potential designs were submitted to the War Memorial Commission. The Atwood memorial plan, whose preliminary drawings proposed a semi-circular design with six pillars, three on each side of a broader center section, caught the eyes of the commission and the veterans committee and was selected. The memorial was paid for by refunds to the city of unused bonus money that the state legislature had voted for the veterans.

The memorial stands at a height of 13 feet, is 23 feet wide, and consists of 1,450 square feet of cement walks with two benches inside a partial enclosure formed by hedges. A flagpole rises from a pedestal in the center of the enclosure. Two color cement has been used to form a star on the floor of the enclosure. The flagpole’s base lists the men from Haverhill who served in the conflict including the 104 names of those who died during the war. The center of the memorial features the following inscription:

Victory – In the days of triumph and peace it is wise to remember the cost of victory. Let us resolve that the sacrifices made by these men shall not be in vain. Let us, the living, pledge ourselves to preserve and protect for their children and ours the freedom and liberties for which they gave their lives.

This monument was erected and dedicated on October 24, 1926 by the city of Haverhill. It collectively honors the the men who served in the Spanish-American War (1898), those who served in the China Relief Expedition (Boxer Rebellion, 1898-1901) and those who fought in the Philippine Insurrection (Philippine-American War, 1899-1902). Three Medal of Honor winners (2 from the Spanish-American War and 1 from the Philippine-American War) were in attendance at the monument’s dedication. The monument features a soldier in period dress set upon a granite block/obelisk. The four sides of the base each have a plaque with additional information, including the names of those who gave their lives in service to their country. Action in the Philippines produced the most battle casualties among those listed; however, disease was actually the biggest killer overall.

Originally, this monument was located between Winter, How, and Emerson Streets across from where Bradford Seafood is now located. It was moved to this location despite the objections of the Spanish-American War veterans because a “hot dog emporium was spoiling the public’s view” of the monument. The veterans felt Gale Park was not a central enough location for the monument.

This monument is the work of artist Theodora Alice Ruggles Kitson who worked for Gorham Company Founders. The Hiker also exists as at least 51 other monuments including the original, which was erected at the University of Minnesota. Haverhill’s Hiker was the 15th produced; there are a dozen more replicas in Massachusetts with another in Manchester, New Hampshire. Others can be found as far away as Los Angeles,California, West Palm Beach, Florida, Birmingham, Alabama and Wichita Falls, Texas. Because of the great number of Hiker monuments and their diverse locations, The Hiker castings have become part of an important study regarding the effects of the elements, including acid rain, on our nation’s monuments.

The last memorial at Gale Park was erected to honor our nation’s women veterans. The Black marble monument was unveiled September 20, 1999 during a dedication ceremony. It features seven engravings: five representing the branches of the Armed Forces, an eternal flame of remembrance, and the portrait of a woman in a World War II military uniform. It was erected in less than a years’ time from the moment the idea was first proposed; in sharp contrast to most of the city’s memorials which often took years of debate and argument before finally being built. It is also unique in that it is not restricted to honoring veterans of a specific conflict or time frame and honors those currently serving as well.