The USS New Jersey has been permanetly docked in Camden as a museum since 2001. (Visit Philly)

The USS New Jersey shortly after its first decommission in 1948. (Wikimedia) 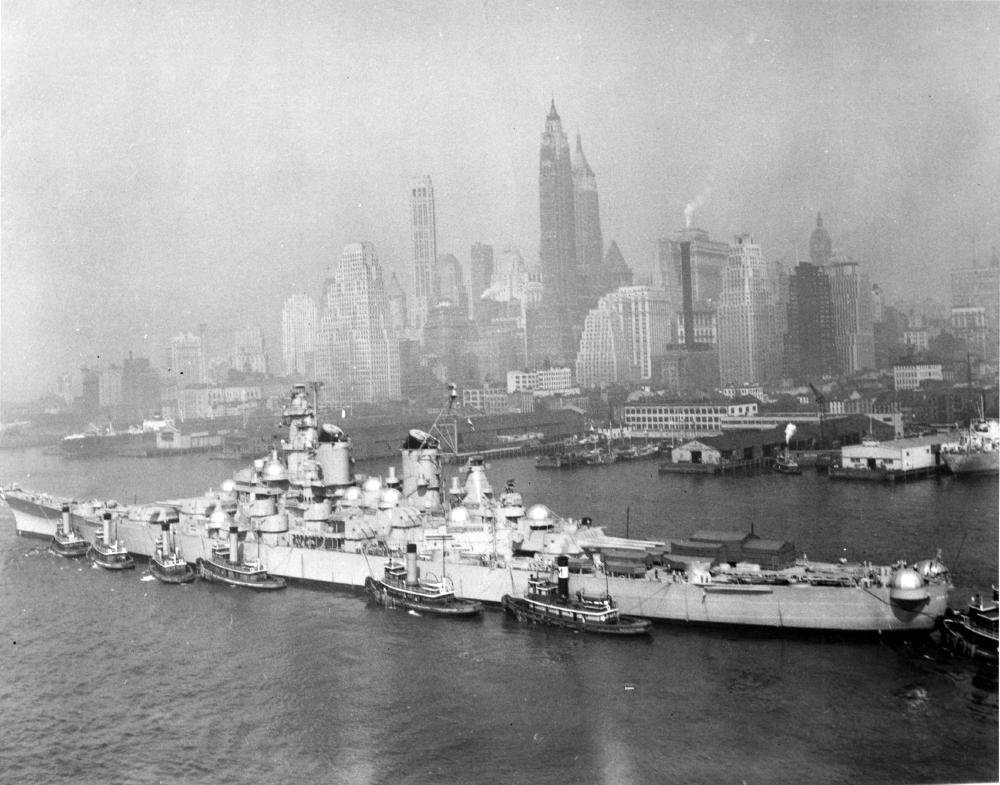 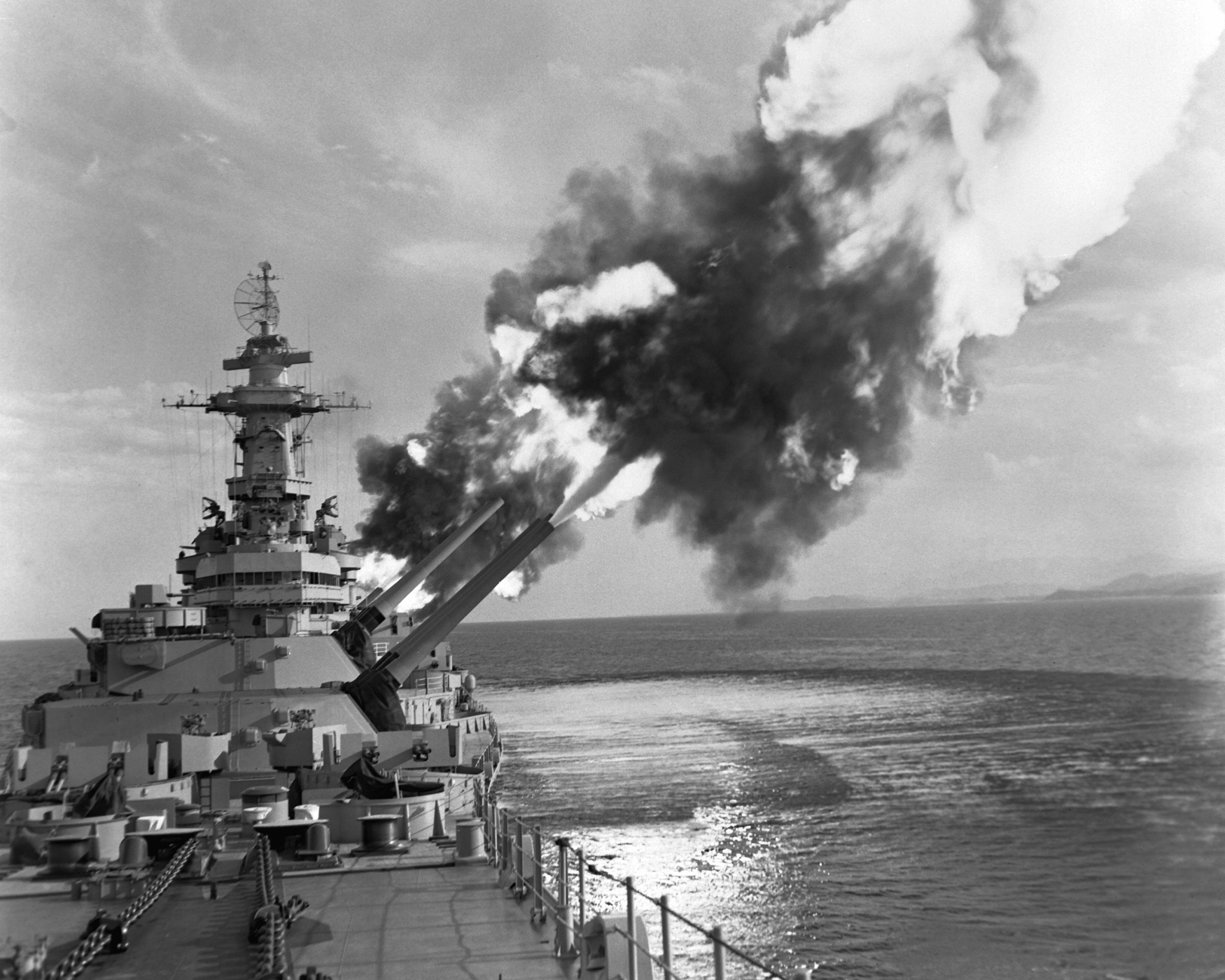 Admiral William "Bull" Halsey and Rear Admiral R.B. Carney on the deck of the USS New Jersey in 1944. New Jersey could often be found at the center of the action throughout the Pacific Theater during World War II. (NHHC) 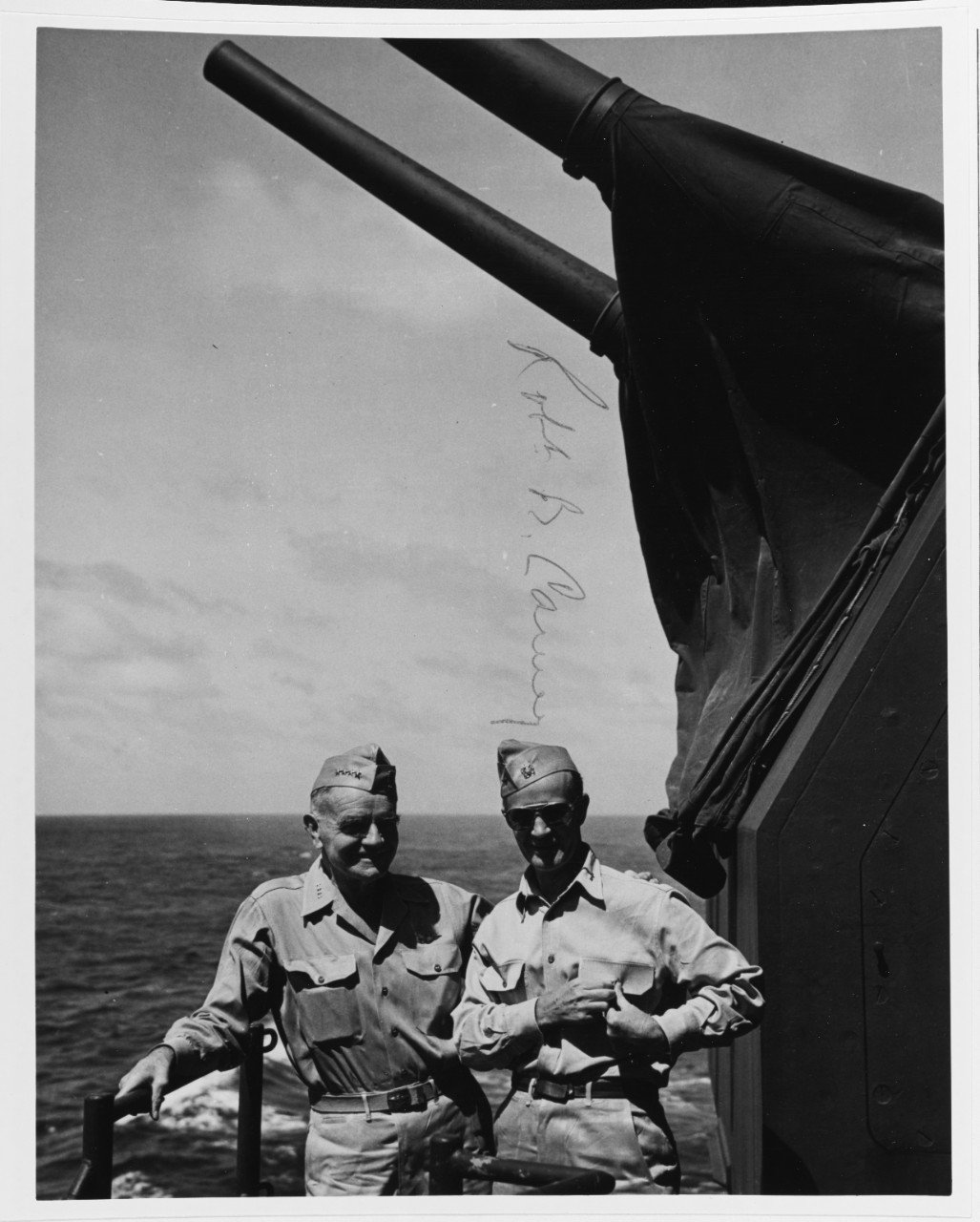 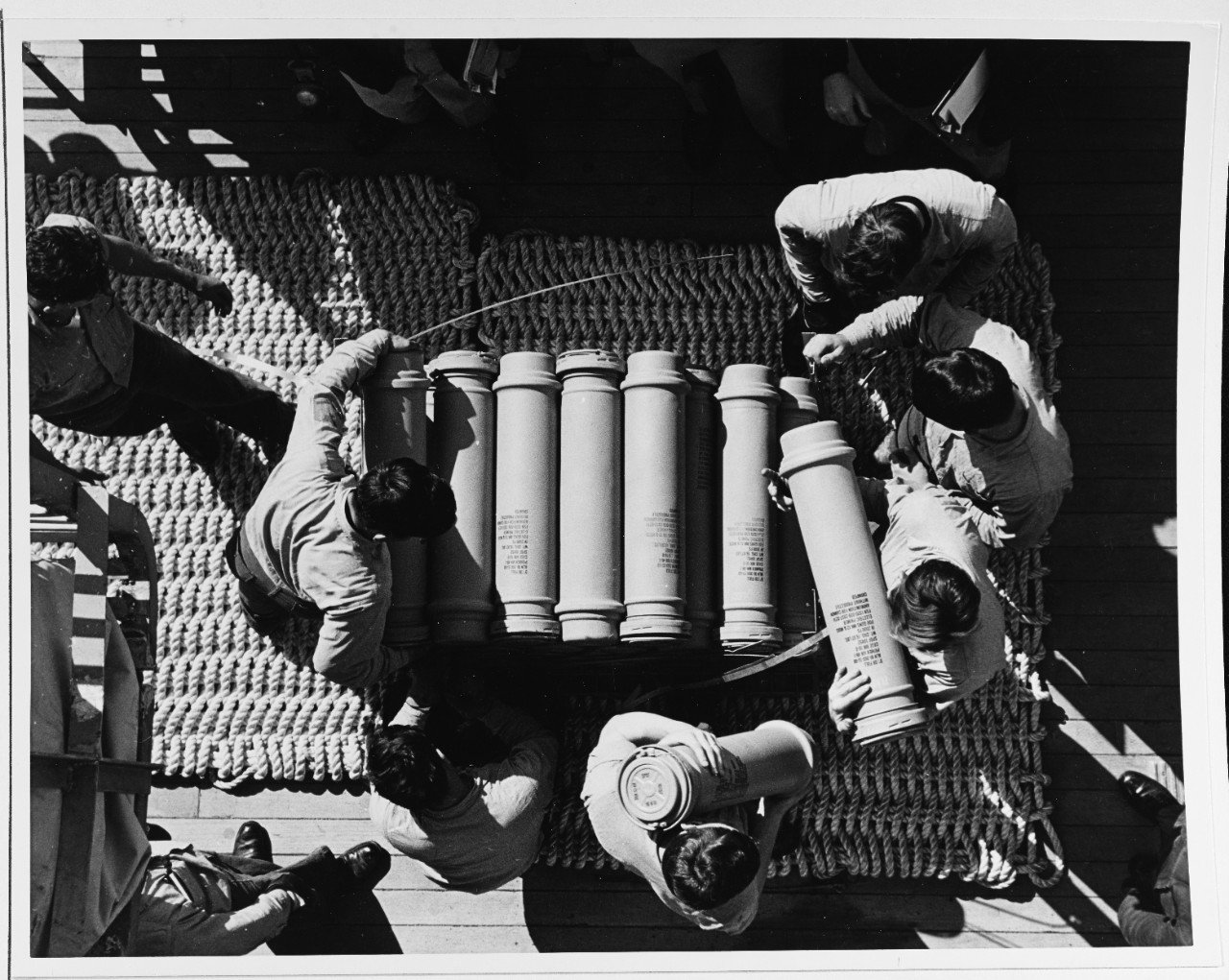 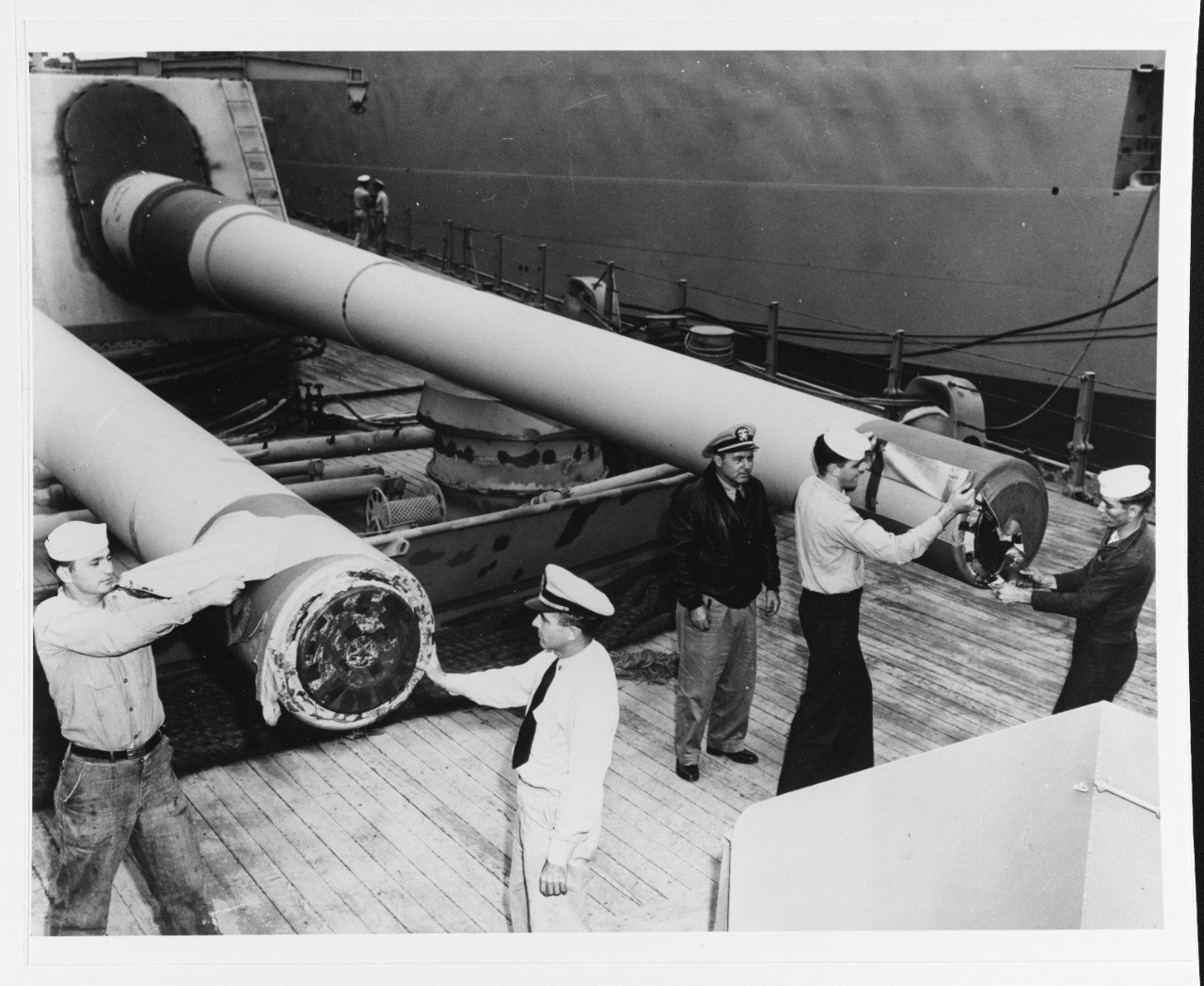 The USS New Jersey (BB-62) was constructed in the Philadelphia Naval Shipyard and launched on December 7, 1942, the one-year anniversary of the bombing of Pearl Harbor. The 887-foot long, 45,000-ton ship was part of the Iowa-class of battleships commissioned during World War II, which also included the Iowa, the Missouri, and the Wisconsin; they were the last battleships commissioned for the United States Navy. The New Jersey soon saw action in the Pacific Theater in 1944, fighting against the Imperial Japanese Navy in the Marshall Islands, Marianas Islands, the Philippines, and Okinawa. After the war the New Jersey was decommissioned and placed in the Atlantic Reserve Fleet in 1948.

In 1950 the New Jersey was recommissioned in 1950 to serve in the Korean War. During this time it mostly provided artillery support for ground forces. The ship was decommissioned again in 1957, and then recommissioned once more in 1968 for the Vietnam War. It was the only battleship to fight in Vietnam, and was the only active battleship in the world at the time. The ship provided was in service only briefly before being decommissioned again in 1969. In 1982 the New Jersey was recommissioned a final time to support U.S. forces in the Lebanese Civil War. At this time the ship was given upgrades, including Tomahawk and Harpoon missile launchers. On February 8, 1984, the New Jersey launched the largest shore bombardment since the Korean War on a command post east of Beirut. In 1991 the ship was decommissioned for the final time. In 1999 it was struck from the Navy rosters and towed to Philadelphia. Over the course of her career the New Jersey was awarded 19 battle or campaign stars; nine for World War II; four for the Korean War; two for the Vietnam War; three for the engagements in Lebanon; and a Navy Unit Commendation for service in Vietnam.

In 1999 a stipulation included in the Strom Thurmond National Defense Act required that the Navy transfer ownership of the USS New Jersey to a non-profit entity in the State of New Jersey for the purpose of becoming a museum. As renovations were conducted on the ship in Philadelphia, two different groups petitioned for ownership, the USS New Jersey Battleship Commission of Bayonne, and the Home Port Alliance of Camden. In 2000 the Navy announced that it would give the New Jersey to the Home Port of Alliance; on October 15 the ship arrived at the Camden Waterfront.

The Battleship New Jersey Museum opened to the public in 2001. It is operated by the non-profit group Battleship New Jersey Museum and Memorial Inc., formerly known as the Homeport Alliance. Hundreds of volunteers are required to operate the museum and keep the ship in satisfactory condition. Interactive tours are available for visitors, and the museum also offers rental spaces for events, and youth-oriented overnight programs. Recently the Museum has undertaken a number of different projects, such as the conversion of its heating system to increase efficiency; the opening of additional portions of the ship to the public; the reactivation of the ship’s whistle; and the opening of a café. In 2017 the Museum acquired an original Quad 40s anti-aircraft gun from the New Jersey and fully restored it to working condition.

Days and Hours vary throughout the year; please see website.