Located on a support columnn at the entrance to the Holiday Inn, this historical marker commemorates this area of New Orleans that is considered the birthplace of jazz. Many businesses were located here in which jazz musicians performed and socialized. These include social clubs, saloons, barber shops, bakeries, and pawn shops. The area at the time was referred to as "Back of Town." The marker was installed by the Orleans Parish Landmarks Commission. A large clarinet is painted on one side of the hotel and there are two murals on the walls on either side of the marker.

A close-up look at the historic marker 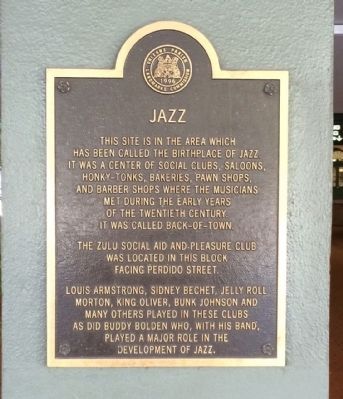 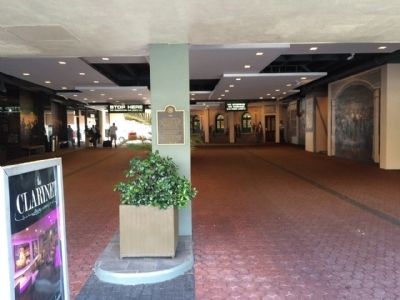 The large clarinet painted on the building 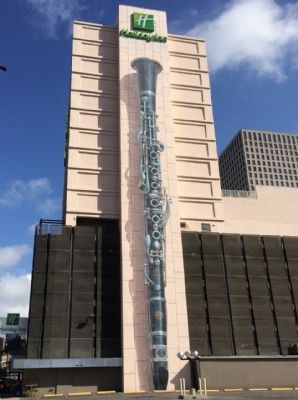 Those who study music history understand that it is not possible to pinpoint a single person who "invented" jazz, nor is it possible to identify a precise date or place of its creation. The heart of jazz is improvisation, something musicians of diverse descent in places like New Orleans and the Mississippi Delta were doing for many decades prior to the creation of the famous Dixieland Jazz Band of Nick LaRocca in 1917. In New Orleans, musicians blended African and European rhythms and methods before the Civil War.  For example, Louis Gottschalk created (and most importantly, recorded his music on paper) a variety of styles and songs such as "La Bomboula-Danse Negre" in the 1840s.

So while jazz can best be understood as the inevitable creation of a place like New Orleans that celebrated music and celebrated (or at least tolerated) mixing people and styles, it is impossible to identify a single birthplace of jazz.

However, as noted by the National Park Service:

The story of the original Creole Orchestra is a case in point. This band was organized in Los Angeles by bassist Bill Johnson, who traveled with a band to that city as early as 1908. By 1914, Johnson had attracted some of New Orleans best "hot" jazz players, including cornetist Freddie Keppard (widely regarded as Bolden’s successor), clarinetist George Baquet, and violinist James Palao. While performing at a prizefight, the Creole band fell victim to the venom of a writer for the Los Angeles Times, who characterized their playing as "a vile imitation of music."

Yet from 1914 to 1918, the band traveled throughout the country, playing prestigious theaters, which should have guaranteed success. However, theater audiences were not in a position to respond appropriately because New Orleans jazz was essentially dancing music. In 1916 the Victor Talking Machine Company offered Keppard and the Creole Orchestra an opportunity to record, but he refused. Keppard feared (with some justification) that recording would enable the competition to copy his style.

When the Creole Orchestra disbanded in 1918, there was little to show for their efforts. The individual members went on to join or form new musical alliance as best they could. In retrospect, however, they were the first New Orleans style band to travel extensively, pioneering a path that would be followed by others.1

Many cities attribute its own musical history back to New Orleans. In Chicago, notably on its south side, migrating2 Jazz musicians adapted to its Chicago audience, which resulted in greater emphasis on solo performances -- the birth of the Chicago Blues scene. In Paris, many musicians arrived to entertain troops during World War I either from New Orleans, or from second generation musicians in cities like Chicago (with its ties to New Orleans). Many Parisians fell in love with the soulful jazz music. 3

While debate ensues over the evolution of Jazz and its true birthplace, the idea of "hot jazz," made famous in the 1920s by such musicians as Louis Armstrong and Jelly Roll Morton is almost accepted as fact as a New Orleans product. Many argue that this evolution of hot jazz points to the flourishing nature of Jazz in New Orleans that turned the music into something hard to define to something that truly carved out a discernable genre of music. As ragtime, blues, and other music owes its roots back to the same place as hot jazz, it was the development of hot jazz that truly emerged in New Orleans. When many hear hot jazz, they think of it as simply "jazz," and often attribute it to a New Orleans style of music.4

The ability for improvisation within Jazz music leaves its birthplace difficult to ascertain.  However, when one looks a jazz "stars," record deals, and influence to other forms of related music -- such as Blues or even Parisian forms of jazz in the 1930s, it is hard not to look back to New Orleans. It is related to the numerous cultural influences and the acceptance of merging forms of music, poetry, and even religion, notably Voodoo. New Orleans was a hotbed of cultural heterogeneity, and modern Jazz emerged from that hodgepodge of  worldly influences.

2. The "Great Migration," in the early 20th century involved multitudes of African Americans moving northward from the American South to northern cities to look for jobs and better lives.