The William Penn Memorial Fire Tower was built in 1939 as a tourist attraction for the City of Reading. The top stone structure on the fire tower stands taller than the Empire State Building and you can see as far as 60 miles each way. The fire tower is one of Readings beloved and most historic landmarks.

Picture of the William Penn Memorial Fire Tower while being built 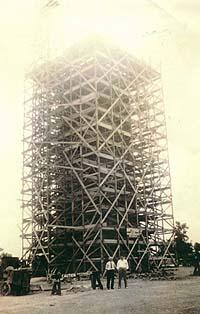 Picture of the tower on a beautiful sunny day 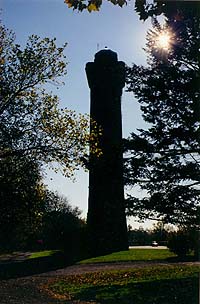 The fire tower sits 120 feet on top of Mt. Penn in Reading, Pennsylvania. It was originally built to serve as a post for the firemen but it is now a popular tourist attraction. From inside the top of the tower, you have a 60 mile, breathtaking panoramic view. It’s been said that if a fire rose at Valley Forge that you could actually see the smoke from the top of this tower. The tower was built in 1939 as a fire observation tower and a landmark for tourists to visit in Reading. The tower was built to “watch over” the city of Reading.  It was made of fire resistant materials when it was built but soon after being built, it started to deteriorate pretty fast so they pour concrete and made a new structure.

The interior of the fire tower has three small rooms that hold the transmitters, restrooms, and an office building when needed. There is a spiral stair case leading to the top of the tower where the observatory floor is.

The tower stopped being used for fire safety purposes in 1988 due to the fact that their was controversy going on about what county could actually use it and where on the county mapped it laid. Today the tower is owned and operated by the City Of Reading. Sadly the tower is slowly deteriorating and the city is doing everything it can to raise money to fix it and open it as a better tourist attraction.

Open the third Saturday of every month (weather permitting) Noon-4pm