2012 Photo of the Williges Building in Sioux City -- Side View 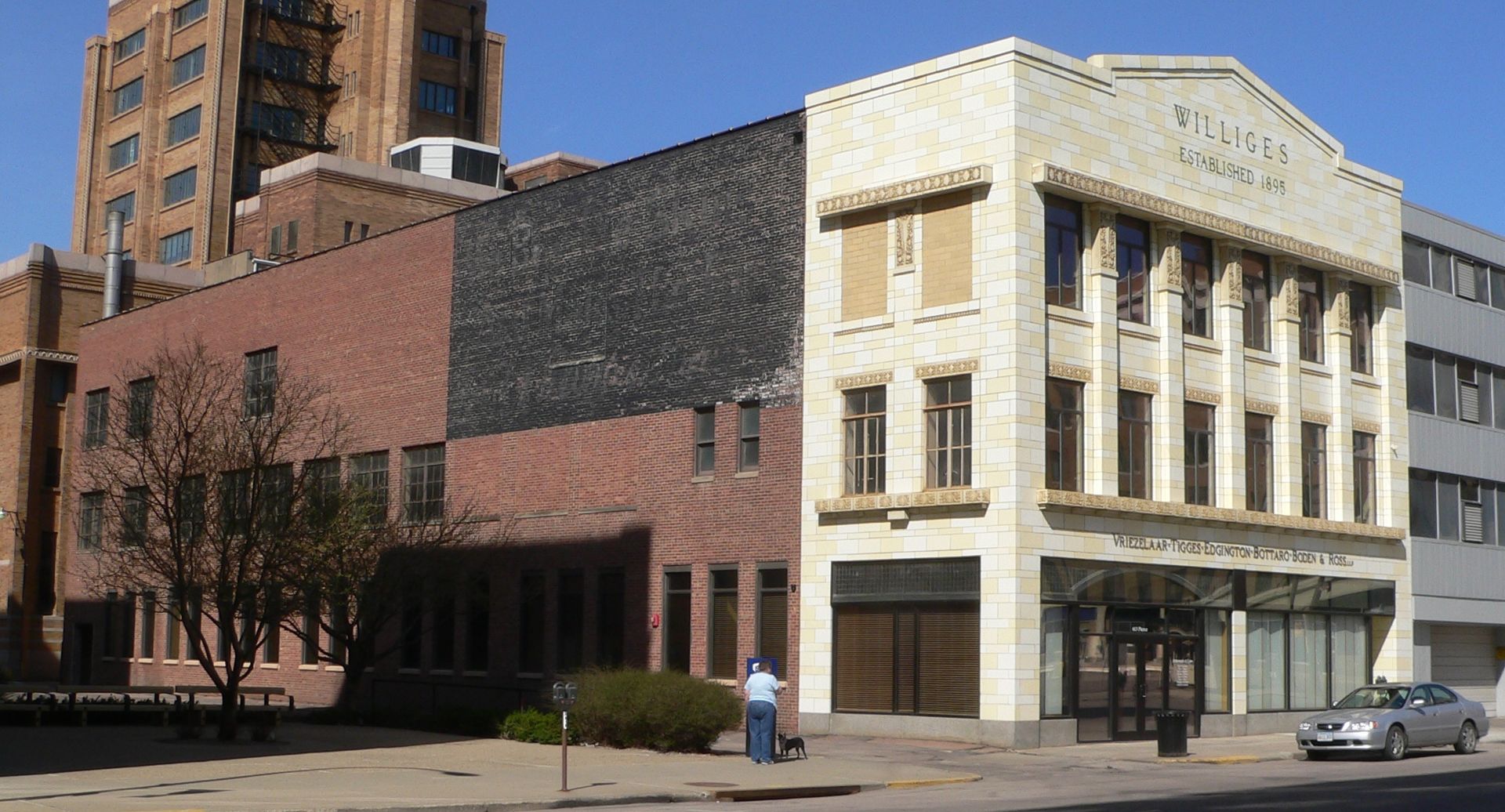 2012 Photo of the Williges Building in Sioux City -- Front View 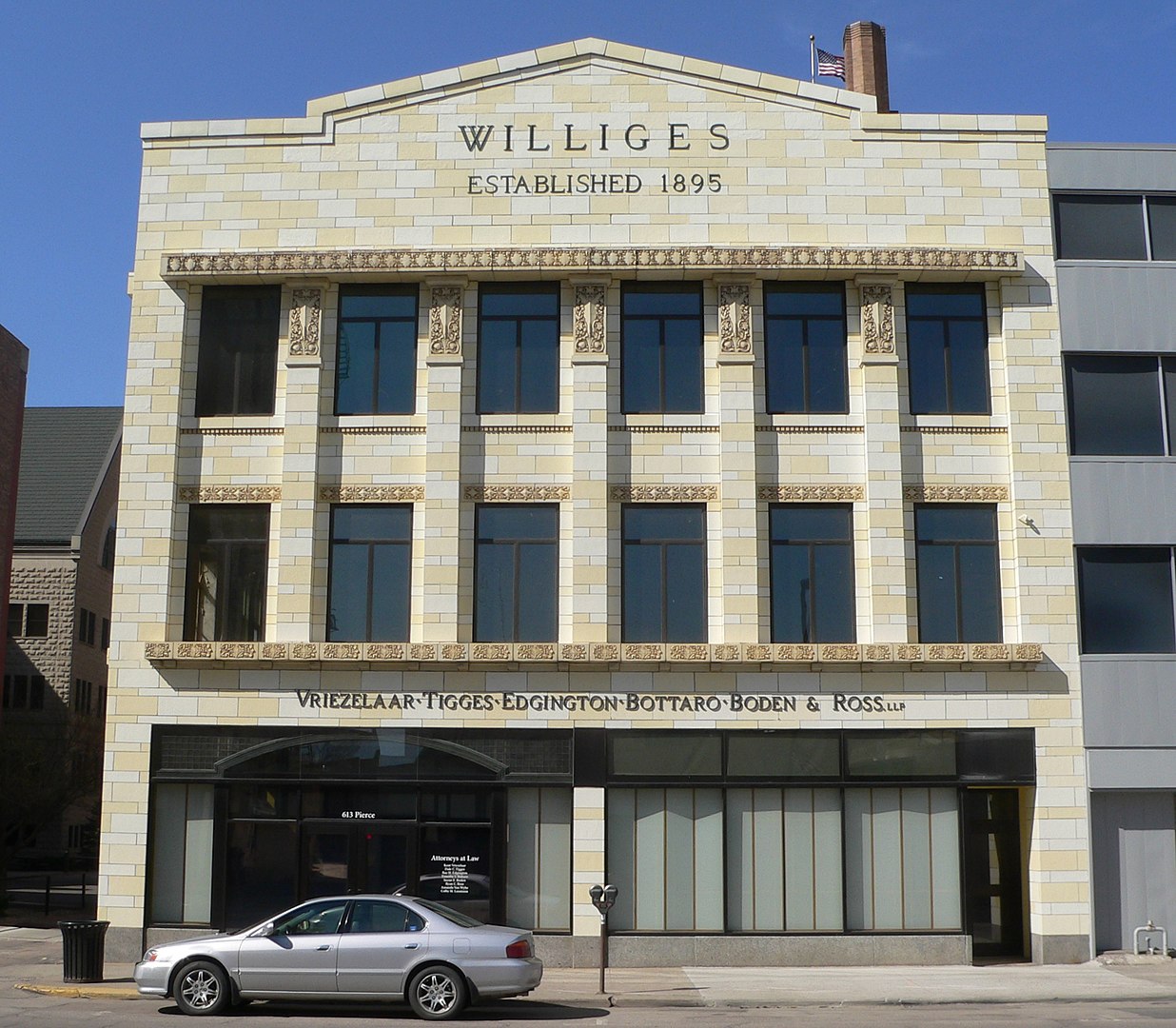 The Williges Building, completed in 1930, is one of the last surviving examples of a manufacturing and retail facility for Sioux City's fur industry; the company manufactured furs from 1930 to 1954. The building also exists as one of the last Prairie School commercial buildings remaining. August Williges, the building's (and company's) namesake, was an influential Sioux City manufacturer and businessman during the early twentieth century.

August Williges was born in Hanover, Germany, on March 26, 1858. He received a limited formal education and began a four-year apprenticeship with a fur manufacturer at the age of fourteen. The apprenticeship provided him with the skills to work as a furrier, but it also proved to him that he would rather own a company one day than work for someone (although it would take two decades to accomplish that goal). His path towards entrepreneurship started in Europe after his apprenticeship ended. He took a series of positions with furriers in several German cities and Zurich, Switzerland. And then, in 1881, he immigrated to the United States intending to open a fur store.

The move to the U.S. did not immediately provide success for Williges as he had to work for a fur manufacturer in New York for eight years. While there, he married his wife, Regina, and they had their first two children. He also had the misfortune of contracting tuberculosis, which inspired him to leave New York. The family moved to Springfield, IL, where he again took a job with a furrier; his dream to own a business would have to wait. While in Springfield, he read materials and newspapers from Sioux City, which led him to believe he could finally realize his dream in that city. But, as was common in the day, city newspapers often served as propaganda material that helped bolster a city's reputation and help draw new people. When Williges and his family arrived in Sioux City in June 1895, they discovered a place suffering from economic decline stemming from the Panic of 1893. However, he remained confident Sioux City would be where he would establish his own business.

Finally, in 1895, Williges opened his first fur store in Sioux City. Early success allowed him to move to bigger stores, first in 1897 and again in 1912. By 1930, Williges' children joined the business as it grew into one of Sioux City's most prominent enterprises. Although Williges attempted to single his company out from others, his fur company operated at a time when the city supported several fur companies. Nonetheless, Williges did enjoy one distinction: his company served as the only furrier in town that fashioned garments directly from raw skins purchased from hunters and trappers. Williges' success by 1930 led to considerable expansion, including building the historic Williges Building.

The building emerged at the end of a construction boom in Sioux City that coincided with the healthy U.S. economy -- the "Roaring '20s." -- and the end of World War I. The builders broke ground for the Williges building in September, mere weeks from the October Wall Street crash that effectively begat the Great Depression. President Hoover funded a national program to reinvigorate commercial construction, which allowed for projects like the Williges Building to continue; the building opened in March, 1930. Designed by William L. Steele, a former draftsman from 1897 - 1900 in the office of Louis Sullivan, and his partner George B. Hilgers, exhibits the lasting allegiance to Sullivan's architectural philosophy. Sullivan advocated the integration of function and rich architectural ornament rendered in terra cotta. Steele and Hilgers designed a terra cotta facade for the fireproof Williges Building comprised of steel and reinforced concrete.

Williges died from pneumonia in 1939 while in Missouri. He divided his estate equally among his five children. In the 1940s, the children sold the business to Cownie Fur Company, who then sold it to Paul Wilderson, Sr., during the 1950s. Wilderson changed the store's focus to women's clothing, effectively ending its run as a leading fur retailer. The building closed in 1998 and remained vacant for nearly a decade and slated for demolition in 2008. But, a public objection arose, which led to a restoration project from 2008 to 2009. In 2010, the Preservation of Iowa awarded the Preservation at its Best award to Bart Connelly and Vriezelaar, Tigges, Edgington, Bottaro, Boden and Ross, L.L.P. law firm for excellence in historic preservation efforts in the Adaptive Use category for their rehabilitation of the Williges Building. By 2014, a conversion of the third floor into living spaces took place.