This historic Toms River house was built in 1868 and offers a model of the Vernacular Colonial Revival style of architecture. The home was placed on the National Register of Historic Places in 1982.

This historic home was completed in 1868. 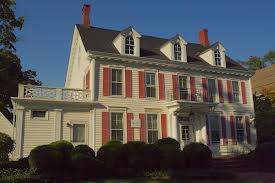 The primary significance of the structure is its historical association as the residence of Captain Amos Birdsall. Coming from a prominent seafaring family, Capt. Birdsall was regarded as one of the most successful sea captains and master ship builders along the Atlantic Coast. From Waretown, Birdsall built and captained numerous schooners that traded along the coast and later sailed to the West Indies and Gulf of Mexico. After his retirement from sailing, Capt. Birdsall concentrated on ship building and managing his fleet of fourmaster schooners which included the Agnes Manning, one of the earliest fourmasters on the coast. In 1868, Capt. Birdsall moved his family from Waretown to Toms River in order that he could commute by rail to his shipping offices in New York City. Birdsall also had financial interest in local banking and was the second president of the First National Bank of Toms River.