Constructed in 1926, the Young-Quinlan Building was home to Young-Quinlan Department Store. The store originally began in 1894 as a small specialty women’s dress shop, the first ready to wear shop of its kind and was owned and operated by Elizabeth Quinlan and Fred D. Young. The building, which continues to a retail and office building, was designated a Minneapolis Landmark in 1988. 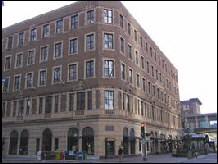 After Young passed away in 1911, Quinlan wanted to expand their store and consulted with several department store owners and managers in America’s biggest cities.  Quinlan hired New York architect Frederick L. Ackerman to design the Young-Quinlan building, an extremely unique construction as each of the 4 facades were designed as equally attractive as the front and adorned with “arched windows, columnns and decorative elements giving each side the appearance of being the entrance side of the building” (“Young-Quinlan Building”).

The building’s “interior has a marble staircase, crystal chandeliers, and metalwork of iron, brass, bronze, and pewter” (“Young-Quinlan Building”).  Another innovative feature of the building was its inclusion of a parking garage. While being innovative for its time, the department store still held on to high-class hospitality by housing the last elevator in the city to still use an elevator operator.

Photo courtesy of the City of Minneapolis