Built in 1899, the Henry and Elizabeth Bockrath House is a two-story, Second Empire style dwelling constructed with a red brick exterior on a limestone foundation. The red brick usage speaks to the influx of German American builders and designers who routinely preferred brick. The Second Empire style, derived from architecture associated with the urban redesign of Paris during the 1850s and 1860s, grew exceptionally popular in the U.S. during the second half of the nineteenth century. The home stood in the Munichburg neighborhood, a name that speaks to the abundance of German Americans living there. The Bockrath family built the house at a time when the German enclave slowly transitioned into a neighborhood of mixed cultures. 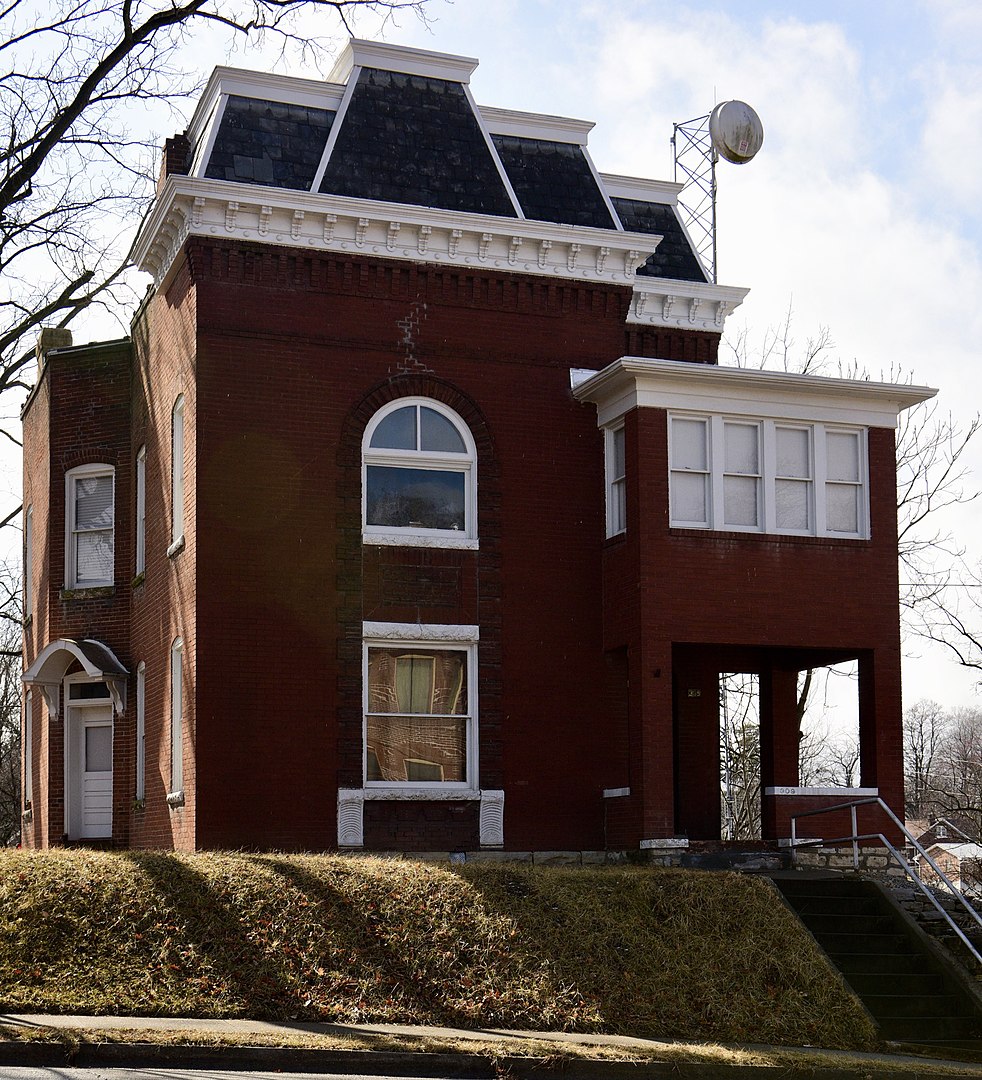 Henry Bockrath worked as a merchant and industrialist after immigrating to the U.S. (St. Louis) at age sixteen from Hanover, Germany, in 1852. After establishing a successful dry goods store in St. Louis, he married the Prussian-born Elizabeth Borkcrath. The couple did not come to Jefferson City until 1885 after years spent in St. Louis and Florissant, Missouri, where Henry operated a store and shoe factory. Bockrath retired from his shoe-factory business and subsequently built and moved into the historic house in 1899, located in the Munichburg neighborhood, established by German immigrants in the 1850s.

The neighborhood had shifted to a more culturally diverse population by the time they arrived. The initial German Americans that settled in Jefferson City during the 1850s came during a time of political and cultural unrest (and crop failures) in Germany. Indeed, nearly one million Germans immigrated to America during the 1850s. By establishing German enclaves in American cities, German immigrants were able to maintain their cultural traditions and language. Two distinct German American neighborhoods emerged in Jefferson City, one initially established by Catholics and the other (in Munichburg), predominantly inhabited by Protestants. Munichburg remained culturally German after the Civil War but less divided along religious lines, as demonstrated by the Catholic Bockrath family settling in Munichburg.

The influx of German immigrants built homes with designs taken from their homeland, usually mixed with ideas adapted from American and French styles, generally consisting of brick construction. Many German immigrants came from northern Germany, where brick construction was prevalent. And in contrast to rural U.S. areas where wood and stone were readily available and cheap, brick availability and cost made it popular among builders in urban communities. As such, brick kilns and brick sales emerged as one of the first industries in Missouri-German towns; the first brick kiln arose in Jefferson City in 1826. The Henry and Elizabeth Bockrath House house, with its limestone foundation and decorative brick exterior walls, reflects this trend of brick usage.

The Second Empire design, part of the broader Victorian Styles that proved popular during the late nineteenth century in the U.S., including the Munichburg neighborhood from around 1885 to c. 1897, was usually built for successful upper-middle-class merchants and business people, including Bockrath. The term, Second Empire speaks to the French designs associated with the reign of Napoleon III (1852-1870), or the nation's "second empire." Under Napolean III, famed urban planner Eugene Haussmann and other builders transformed Paris into a city of grand boulevards and large buildings enjoying Renaissance-inspired architecture. The Second Empire architectural trend spread throughout Europe and the U.S. during the nineteenth century.

Henry Bockrath arrived in Jefferson City near the beginning of a population and commercial construction boom. By the turn of the century, three railroad lines served Jefferson City, the city's infrastructure had improved profoundly, and the city completed a bridge across the Missouri River around the turn of the century. In 1896, Bockrath established the H. Bockrath Shoe Company (1896), and despite paying for workers instead of using prison labor as many of its competitors did, the company enjoyed success. (The use of prison labor existed as a legal practice until 1915.) The shoe company more than tripled its workforce, going from 40 to 150 employees by 1900. However, while they refrained from using prison labor, evidence suggests they employed children (boys and girls), which would have been legal at the time. So, some of the workforce, possibly as many as fifty employees, were children or teenagers. Typical of early German Americans, and in the era before the automobile and streetcars, the Bockrath family and company directors lived only a few blocks from work and close to each other.

Henry Bockrath retired from the business in 1900 at age 63, leaving his son George to manage the company. It is believed that George managed the company until it closed in roughly 1908. George was one of nine Bockrath children who survived to adulthood; Henry and Elizabeth had twenty-four grandchildren by their fiftieth wedding anniversary in 1914. Around 1910, George and his family moved to Joliet, Illinois, while Henry and Elizabeth returned to St. Louis in 1911. The Munichburg neighborhood the Bockrath family left behind still enjoyed strong German cultural influences by the 1910s. Still, people of different religions, cultures, and nationalities had all slowly moved into the area, reflected by the schools built, which spoke to the "Americanization" of the neighborhood. Anti-German sentiment grew during World War I, making it more challenging for German Americans to maintain their culture. By the 1930s and 1940s, the community had changed profoundly, including many German-built homes torn down and replaced with apartments; thus, the Bockrath home stands as one of the few survivors of a time when the area served as a German enclave.