Originally a German Methodist Episcopal Church in 1874 serving the German American Munichburg neighborhood, Albert and Wilhelmina Thomas converted it into a duplex in 1929-1930. In between its time as a church and as Thomas' residence, the structure acted as a garage and upholstery shop. Both its history as a church and home to German immigrants speaks to the nature of the neighborhood as a thriving German enclave. Although the character of the area changed profoundly after the 1910s, the home remains in the family (as of 2022).

Albert and Wilhelmina Thomas House. The home is also referred to as the Walter and Edna Schroeder House and the former German Methodist Episcopal Church. 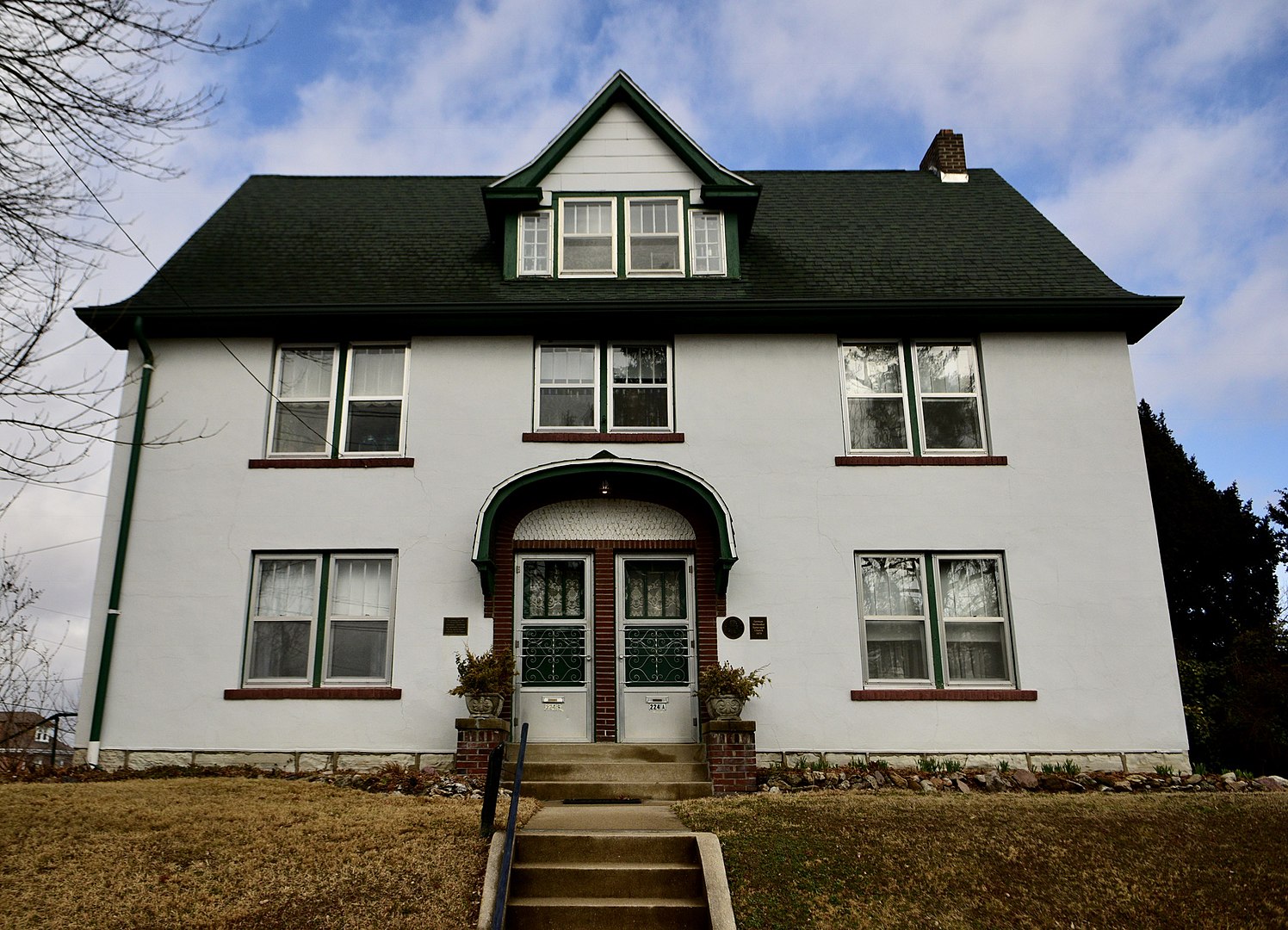 The building's initial history as a church (1874 - 1915) speaks to the neighborhood's association with the influx of German immigrants into the U.S., including Jefferson City, during the second half of the nineteenth century. The initial German Americans that settled in Jefferson City during the 1850s came during a time of crop failures as well as political and cultural unrest in German-speaking regions of Europe. Nearly one million Germans immigrated to America during the 1850s. By establishing German enclaves in American cities, German immigrants were able to maintain their cultural traditions and language. Munichburg emerged as one of two distinct German American neighborhoods that formed during the 1850s in Jefferson City.

German Americans located in Cole, Cooper, Moniteau, and Osage Counties formally organized the congregation of the German Methodist Episcopal Church in 1846 by members in Cole, Cooper, Moniteau, and Osage Counties. The church incorporated in 1873, and then construction on the now-historic structure (Thomas House) took place from 1874 - 1875. Church membership declined steadily towards the turn of the twentieth century. Though evidence suggests the congregation hoped to build a new church building, possibly to boost membership, no records exist of any serious move to build a new facility. The dwindling membership coupled with anti-German sentiment during World War I led to the church's dissolving in 1915. The neighborhood also underwent a considerable cultural shift during the 1910s, no longer existing as a true German enclave. Albert and Wilhelmina Thomas, German immigrants who came to Jefferson City around the year 1900, and their five children joined the German-speaking Central Evangelical Church.

Wilhelmina's parents strongly disapproved of her choice to marry Albert, a man from a different faith and in a lower economic class. Albert grew up in Germany as a Protestant peasant while Wilhelmina was raised as a more well-to-do Catholic. In fact, Wilhelmina's parents refused to accompany her to the train station to say their goodbyes before Albert and Wilhelmina departed for the United States prior to 1900. The couple sought to move to a German enclave, although no evidence exists to explain their choice to move to Jefferson City (specifically Munichburg) rather than other locations. Nevertheless, Munichburg served their desire to live among Germans. Indeed, although neighbors taught Albert and Wilhelmina English, Wilhelmina chose to read German newspapers for the rest of her life.

After the building sat vacant for a time, a garage and upholstery shop occupied the shop for a few years before Albert Thomas purchased the building. In addition to converting the church building into a duplex, Thomas, a barber and builder by trade, built two homes on the same block. Thomas developed the duplex to house both himself and his wife, Wilhelmina, as well as his youngest child (of five) Edna Thomas Schroeder. Edna married Walter A. Schroeder in 1930, with the ceremony taking place in the newly-remodeled home's garden. After a brief honeymoon, they returned and moved into the home. Similar to many families during the Great Depression, the Thomas family moved upstairs and rented the lower level. Later, parts of the second floor were rented as well.

Edna and Walter remained in the home throughout the twentieth century; Walter died in 1966, while Edna died in 2000. However, the home remains in the family; Edna's granddaughter owns and lives in the house as of 2022.

Schroeder, Julianna. The Opulent Opossum (blog). Accessed November 30, 2022. http://opulentopossum.blogspot.com/. Schroeder, Edna's granddaughter, lives in the house and maintains this blog where she often refers to family events and traditions in the house. In the late summer of 2022, she mentioned installing a new HVAC system for one of the home's two levels, a remnant of when the family divided the house into two apartments during the Great Depression and maintained it that way for decades later.